Last landmark in Nebraska was Scottsbluff.  This Mesa stood directly in the way of the westbound travelers.  At first they went around, but as Americans are prone to take the direct route, they eventually built a trail thru the bluff and saved a days journey.

Each saving of a day was one more day that they did not have to worry about not making it over the mountains before the snows closed the route till spring.  To not make it before the snow usually meant death.  This was serious business!

These 2 pictures show either side of the pass.  You can see that the Bluff was a formidable obstacle. 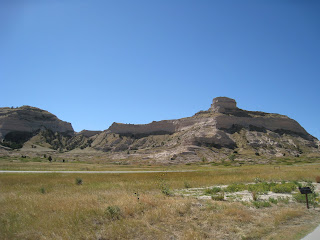 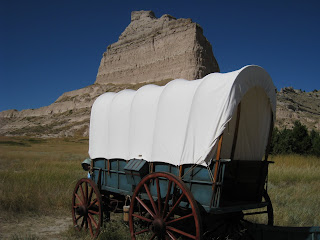 Courthouse/Jailhouse Rocks, Chimney Rock, & Scottsbluff were the first real western geographical features encountered on the trail and marked the passage into the American West.
Posted by GregK at 6:20 PM