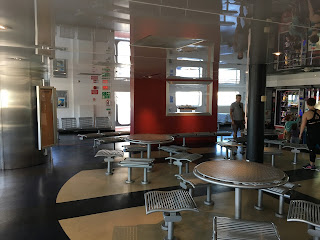 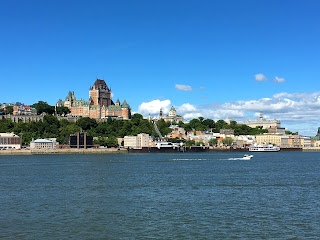 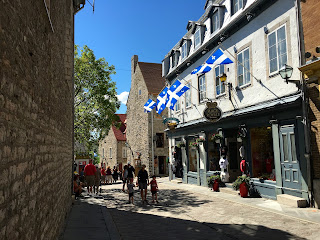 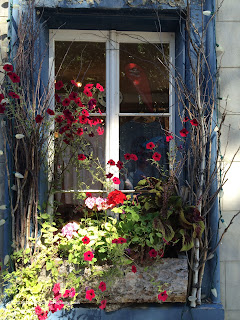 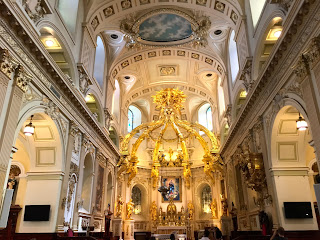 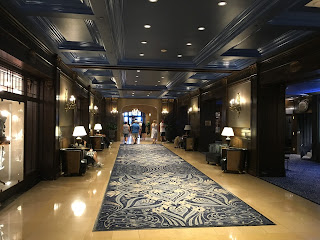 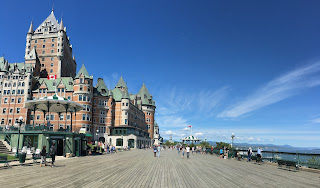 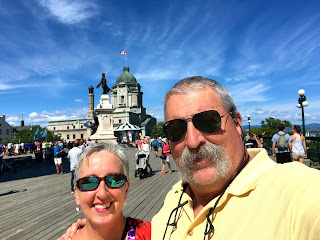 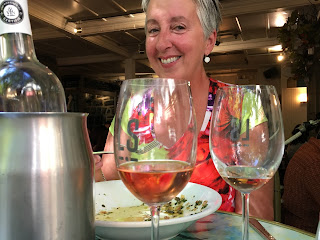 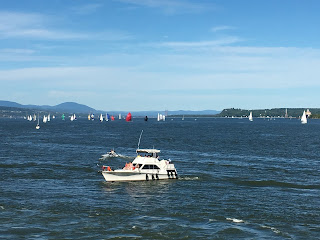 Since we last checked in we have clocked off another 780miles on the old odometer
and are now sitting just outside of Quebec City, Canada.

But before I get ahead of myself....

We left Gettysburg on Monday headed 395 mi North to Lake George NY and the
Lake George RV Park, which was to be our home for the next 4 nights while I
checked into the office and attended to a normal biennial audit by Berkshire Hathaway.

The RV Park is quite nice.   It has more of the feel of a State Park as far as the
privacy, natural features and site size, yet has all the amenities +++ to keep families
happy for their long summer vacations. 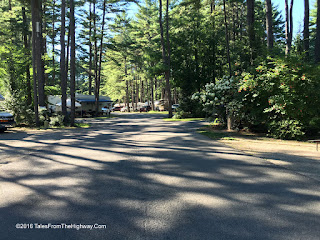 I chose our site online when I booked because it was sunny and in the open and I
thought I'd have a good shot at the satellites but some trees across the street were just too
tall.  I should have been two sites to my right (#55 or 56) to get the Dish W Arc birds.

Not to worry - the park has cable at all sites so we were able to keep up with the Kardashians.


Our audit was completed late Weds evening and it was time on Thursday to
do some visiting with local friends.

My buddy Matt is an avid hunter and fisherman, spending weeks in the Adirondack in
a tent while hunting each season.   Recently he purchased 35 acres and is building a garage
on his property to house his "Toys".    (Snow Cats, Front end loaders etc)
Heated by wood and water supplied by cisterns, I could not even talk him into putting
a satellite dish on the roof. 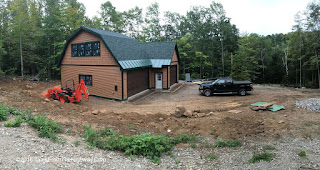 The second floor over 1/2 of the garage is one room where he can sleep if we
can pry him out of the tent.

One of the winter modes of Transport. 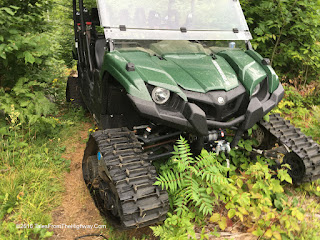 One of the neighbors...   a type of Salamander.
I think its called a Red Eft.

2 miles down the road is another of Matts Neighbors

Friday morning dawned rainy and cool.
A cold front was passing thru and by the time we were hooked up and ready to go at
8am the clouds had parted, the sun was out a a brisk northwest wind was blowing.

We enjoyed a beautiful drive up I-87 the Adirondack Northway, and by 11am
we were in line to cross into Canada.    It took about an hour for us to make it to the head of
the line and we were quickly processed and past thru by a friendly young border agent.

by 3pm or so we were parked in Camping Transit - an RV park in Levis, QC just south
of Quebec City.  We will spend the next few days here while we visit Old Quebec.

People often ask how the dogs do with all the traveling...
I think this picture says it all.

We are back on the road.
Our destination is the Canadian Maritimes, but we have some stops inbetween.

Our first stop was Gettysburg, Pa.
Our long time blog followers might recall that we were here about 3 years ago
but we were somewhat limited in our visit due to a government shutdown that
prevented our visiting much of the battlefield.

Fortunately this time around no such limits were placed on our visit and we were
able to see the areas that were off-limits last time.

Having been happy with our accommodations the last time - we once again stayed
at The Artillery Ridge Campground.
We are in site 424 in the quiet back side of the campground with
full hookups and 50amps. 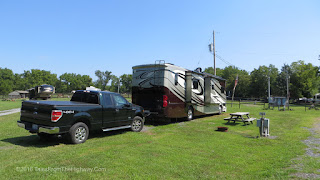 Our first stop was the Gettysburg National Cemetery where over 3,500
Union Soldiers were laid to rest.    It was here, upon the dedication of the Cemetery,
that President Lincoln gave his famous Gettysburg address.

Next we headed over to the center of the union lines on Cemetery Ridge to visit
high water mark.   It was here on the 3rd day of the battle that the Confederates
momentarily broke the Union lines during Picketts Charge. 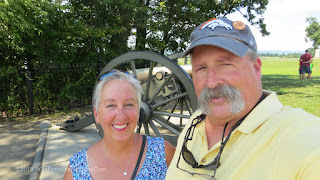 The objective of Picketts Charge had been the trees in this photo.
12,500 men started across almost a mile of open ground
By the time they broke thru the Union Center, only 2,500 men were left, the
remainder retreating, dead, wounded or captured.

The 2,500 who did break thru were either killed or captured within 10 minutes and
the lines held. 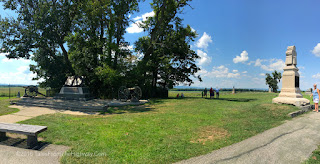 Sunday we visited Little Round Top and Devils Den.
Round Top was the high ground at the southern end of the union lines and
commanded an expansive view of the battlefield.

It was also the scene of fierce fighting over the 2nd and 3rd days. 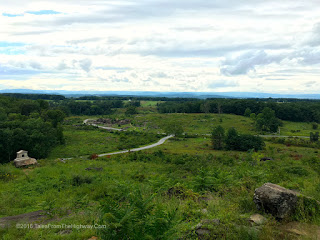 In the Panorama below #1 marks the Devils Den, #2 marks the field crossed during
Picketts Charge and #3 Cemetery hill - the Northern end of the union line.
Just below cemetery hill you can see the memorials around the High Water
mark and the Center of the Union lines.

A monument to the NY 44th from Albany, NY on Little Round Top. 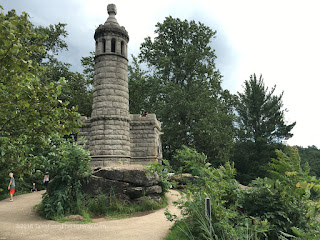 The view from Little Round Top looking north along Cemetery Ridge
to the Northern end of the Union lines. 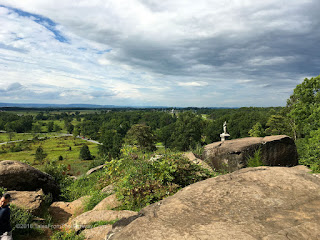 The view that a 3" gunner had from Round Top. Tomorrow we pack up and head 400 miles north to Lake George, NY
where I will spend next week attending to some matters for work.

Once done with that - On Friday we will continue north and cross the border
with our first Canadian stop Quebec City.