Yesterday we drove 300 miles to the sleepy little desert town of
Borrego Springs.

Borrego Springs lies about 55 miles east of the Pacific Coast about 50 miles
south of Palm Springs.

Our home for the next few days is The Springs at Borrego RV Resort.
The Resort is a beautiful green oasis in the dry desert. 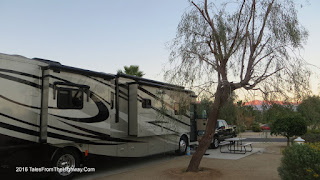 Borrego is known for a number of things, the large animal sculptures that are scattered
around the surrounding countryside is certainly one of them.

Commissioned by the Late Dennis Avery (Of Avery Labels) there
are 130 enormous metal sculptures created by artist Ricardo Breceda. 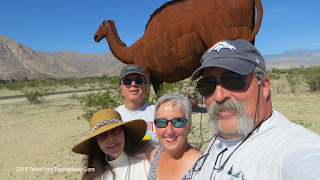 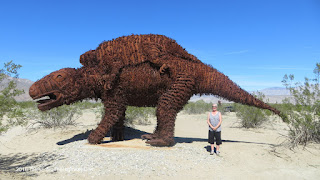 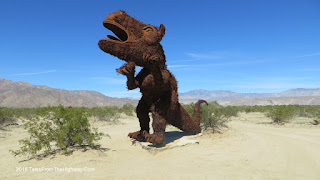 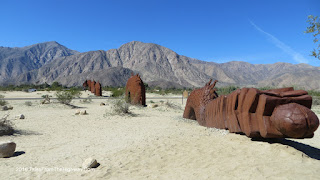 This sea serpent undulates above and below the surface and crosses a road. 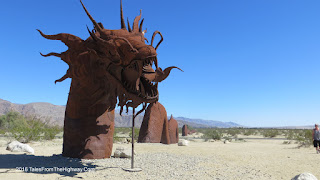 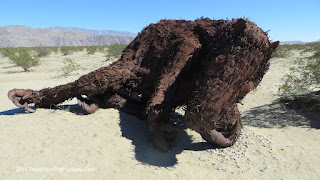 At times surreal - the creatures appear to roam about the land. 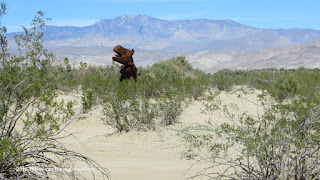 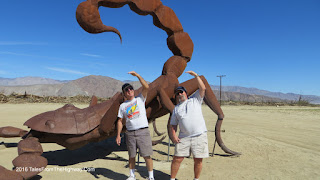 This interesting creature (a Raptor?) is fighting off a snake that is trying to eat
its young in the nest. 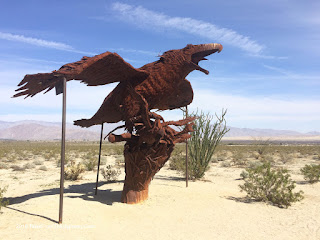 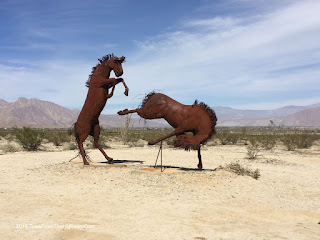 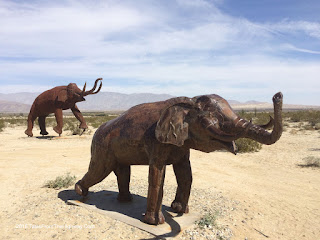 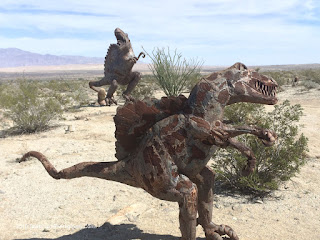 The Ocotillo is beginning to bloom.
Considering all the rain the desert has received this winter, it is shaping up
to be a rather colorful spring. 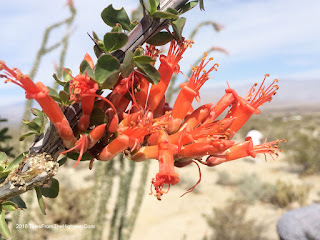 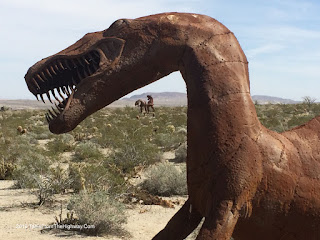 We pulled out of Borrego Springs this morning and drove about 2 1/2 hrs over the
mountains to Riverside California.

We are now at Rancho Jurupa Regional Park where we are meeting our friends
Marcel, Michaela, and daughters Francesca & Isabella who have flown
in from Switzerland.

We will spend the next 9 weeks traveling with them and are looking forward to our
new memories to be created.

Reading the title of this post one might pause to wonder if we are still in the Sonoran Desert.
Yes there are lakes in Arizona...  and they are quite lovely.

We spent 3 week boondocking at Lake Roosevelt.
During that time, I obtained a good feel for how the solar installation on the bus would work,
.
I made a lot of progress on getting the 2016 Budgets completed for work,
and of course, we had a few more great meals.

On Jims next to last night he broke out 3 racks of baby backs and put the NexGrill to work.
A rub of Bad Byrons Butt Rub and slow cooking on the grill and Jim
had a masterpiece.   These were among the very best ribs we've had. 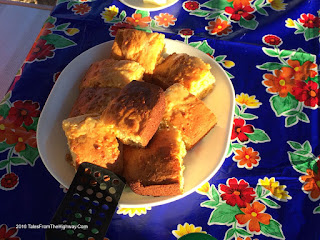 A bit of Salad 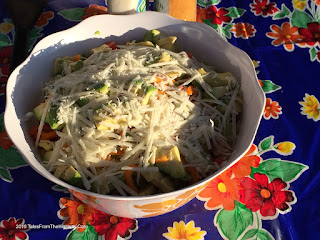 It was truly a fitting meal to say goodbye for now to Jim & Kristi, Stan & Marilyn.
They were headed off to Mexico for a month on the beach.

One night we made our campfire before dinner since there was a bit of chill in the air. 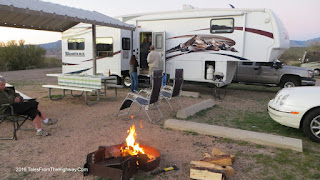 As the night progressed, the fire kept us nice and toasty. 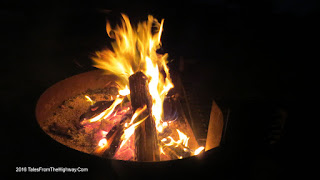 The group sits down to dinner. 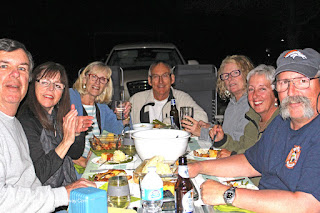 One afternoon we watched the "Long Long Trailer" on the outdoor TV.
Its always enjoyable watching a show outdoors in the fresh air.

The "Long Long Trailer" is to RV'ers what "Captain Ron" is to Sailors....
Must See Movies.

After 3 weeks at Lake Roosevelt it was time for all of us to move on.

Ron & Maxine accompanied us to our next stop,
Lake Pleasant Regional Park on the northwest corner of the Phoenix Metro.

The view from the bus...
Ron & Maxine are below us.
The weather here has been in the high 80's and just wonderful.

While at Lake Roosevelt I realized that I needed to swap out my inverter.

An inverter takes DC battery power and converts it to AC home current so that you can run all
of your appliances just like you are home.

I needed to swap out the Modified Sine Wave for a Pure Sine Wave Inverter.
Suffice it to say that the PSW Inverter provides a higher quality power and I really need
it for all of my sensitive office equipment.

I had already burned up a few minor devices so it was time to swap it out before
I really lost something important.

I was swapping the old with a new from the same company so the wiring was
going to be identical, and it was basically a plug and play type operation.

Tiffin used "Molex" connectors for the AC connections so it was easy to unplug the
unit and then do the wiring of the new inside the Coach.

1st Step was to remove the old inverter.

I removed the old and bypassed the AC pass-thrus so that we would have all of our
circuits while I bench wired the new inverter overnight.

The Molex Connectors made bypassing the inverter a simple operation.

Before I removed the wiring from the old I labeled all the wires.   1-6

I then labeled the connections in the new inverter 1-6

The wires were moved from old to new using the same 1-6 layout.
Here is the new inverter wired up.

Bench wiring is done and the inverter is ready to be installed.

The inverter weighs about 60lbs and installs on the ceiling of the basement cargo
area.   It gets bolted up and is very difficult for one person to handle and get it bolted up
at the same time.   This was actually the most difficult part of the job.

To make it easier I used two scissor jacks to lift it up to the ceiling. 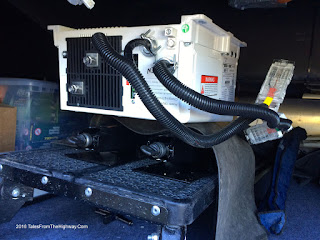 I put a rubber mat on the jacks to keep the inverter from slipping, and I
jacked it up so that I could bolt it into place. 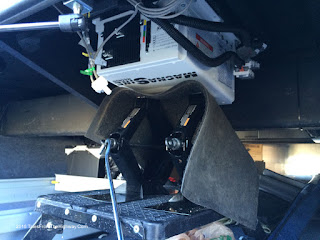 Once secured in place, the final wiring connections were made and Voila..
We were back in business with cleaner reliable AC Power.

Replacing the inverter was the last thing I had on my list of needed upgrades.
I'm happy to have this checked off of my list as some of my office equipment
was not happy with the old Modified Sine Wave Power.

It was a simple job that was completed in two evenings a couple of hrs each day.

We are here at Lake Pleasant for another day and then will be headed off
to Borrego Springs, Ca to a very very nice RV park in a very interesting area
in the California Desert.

There are some really neat things to see when we get to Borrego. 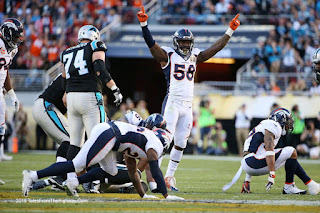 This morning we had a change in the neighborhood as Jim & Kristy
and Stan and Marilyn pulled up stakes and headed off to their next
adventure in Mexico for a month.

A few hours later Rob & Pat pulled in to share in our
SuperBowl Sunday party.

We watched the TV on the outside of the Bus.

As the afternoon sun dwindled, we started a nice warm fire.
We had appetizers and dinner outside watching the game while enjoying a campfire.
Pretty nice! 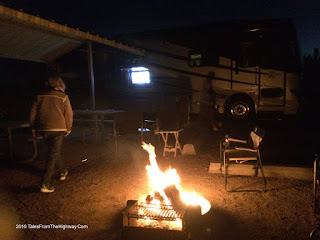 Of course the highlight of the day was the Broncos winning Superbowl 50! 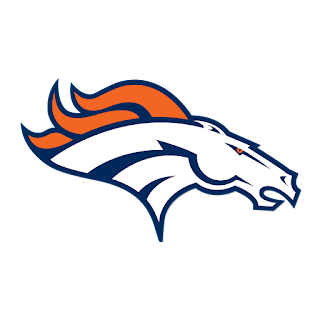 A picture never does the real thing justice...
I find that especially so for the pictures that I take.

Regardless of that, I wanted to share this mornings pre-dawn sky.
Seeing it in person it was stunning.

This morning about 6am local time the waning moon created a
right triangle with Venus and Mercury. 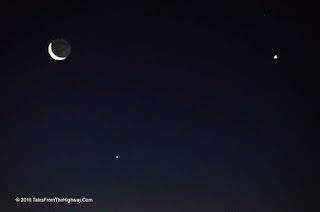 The crescent moon was partially illuminated by "earthshine" - the reflection of the suns light
off of the earth, much as the full moon illuminates earth at night.

Viewed from the moon the earth would appear "full" right now as the cyles are reversed.
The earth appears "full" from the moon when the moon is "new" or unseen from earth,
and vise versa. 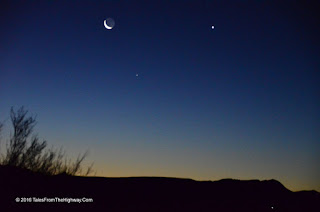 I subscribe to a daily email newsletter that keeps me up to date on the current
celestial happenings (and cuts down on my sleep time).

This month you have an opportunity to get up about an hour and a half before sunrise
and see 5 planets all neatly aligned in an arch along the elliptic plane - the path that they and
the sun take across our sky. 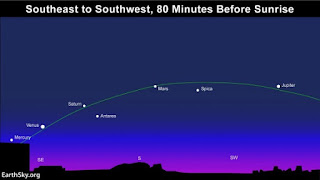 Grab a cup of Joe and enjoy the morning sky.