Is that a custom paint job?

When we were camping in Grand Teton NP there was this Chevy Avalanche with a real distinctive paint job.  I went over to the man & woman and asked "is that a custom paint job?"

They answered yes, but then also mentioned "until the we hit the deer"  (there was a dent in the front from a tangle with a deer) 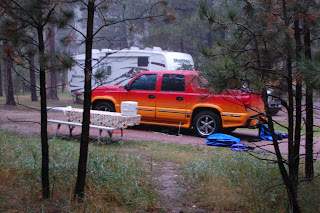 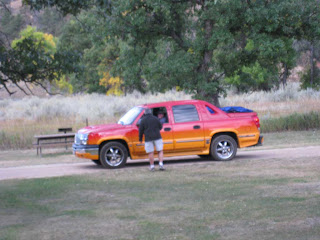 So I run over and ask him again (as a joke) "is that a custom paint job?" and when he says "yes" I then interrupted and said "I bet before you hit the deer"
So he recognizes me from Grand Teton - we have a laugh - chat for a while and then off he goes.
Finally - we are walking back to our campsite the other afternoon in Custer State Park and we see that pickup parked by some horse stables.  It's backup lights are lit so we realize he is getting ready to leave.
Kate runs over and asks him - "is that a custom paint job?" and as he says yes.    I then yell from across the street:  "yes - before he hit the deer"
We've now bumped into each other at least 4 times over almost 500 miles so that must mean something.
They decided to spend the night in the campsite next to us.  We had a wonderful dinner at the local campground restaurant (yes Custer state park even has restaurants at the campground).
I had a great Bison Meatloaf made from Custer State Park Tatanka.
Just like that we make new friends Bob & Cathy from Cooperstown NY.
Posted by GregK at 5:43 PM