Sorry for the delay in posting but yesterday we were in an area of no phone or
internet so were pretty much off the grid for 24hrs.
Yesterday we traveled from Winslow Az to Flagstaff, Az.  Or more precisely to the Bonito National Forest Campground about 12 miles north of Flagstaff.
It was a short 75 mile drive and we arrived early in the day. 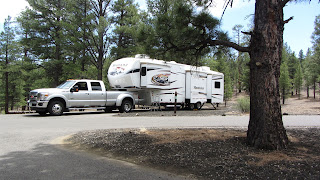 Our home for the night is in a cinder field from the nearby Sunset Crater.
The ground is dark black and crunch with no understory but large Pondersosa Pines
Provide ample shade and greenery.
The campground is located just outside of the entry to the Sunset Crater National Monument.
The sunset Crater is a Cinder Cone (a mountain formed from Volcanic debris spewed from a volcanic vent)
It is basically an 1,100 foot high pile of cinder 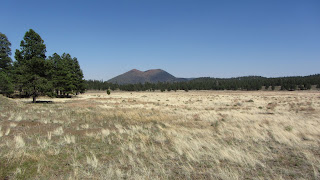 Sunset Crater was named by the famous explorer John Wesley Powell
who noted its reddish color seemed to be on fire at sunset. 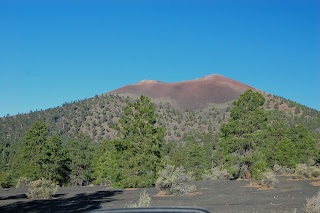 In addition to the large cinder fields all around the cone, there was several large lava flows.
One of these flows wrapped around our campground. 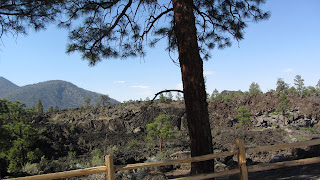 During the day, the sun beat down on the black ciders warming up the air but
as soon as the sun went down the temps dropped considerably.
We spent a cool night with pretty strong winds blowing thru the coach due to our open windows.
Tucked comfortably under our blankets it was a great nights sleep!
Posted by GregK at 6:30 PM