A feast of Color - Get your kicks on Route 66 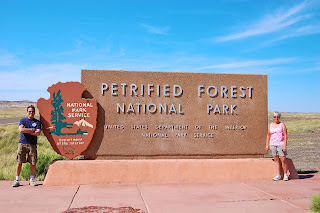 First the Petrified Forest
Over 250 million years ago during the Triassic Period, this part of Arizona was
a humid tropical forest and was located about the latitude of present day Panama.
The animals that roamed the land were the precursors to the dinosaurs that we all know.
A great flood swept thousands of trees, downstream until the flood slowed and
the waterlogged trees sank in the swampy estuary.
Some of these prehistoric trees were over 200' tall!
Over time, the trees were buried deep in the mud.
They absorbed all the minerals inthe mud, eventually the chemical
reactions between the trees and the minerals resulted in
each cell of the tree being replaced by minerals and the trees turned to stone.
The movement of the tectonic plates, the upheaval of the continents,
eventually the forces of nature thrust this land thousands of feet
into the sky.
The climate changed and the forces of erosion
worked against the upheaval of the land.
Eventually the trees that were swept downstream in that flood
250 million years ago,
once again saw the light of day.
The result is this. 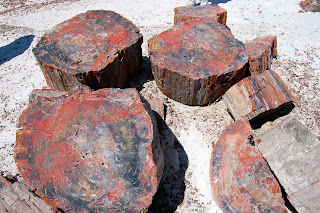 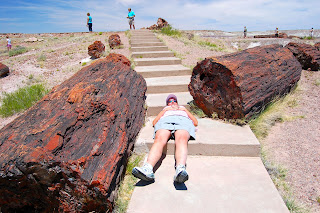 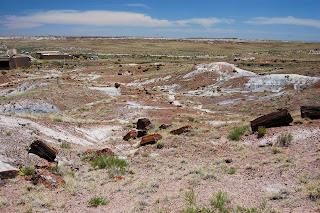 Unfortunately man was not kind to the petrified forest and before it was protected
as a National Park, commercial operators had dynamited the largest of the trees
in search of precious stones.
You can look at this amazing relics of the past and see the bark & the tree rings.
It's quite amazing!
Our daily self portrait from the Petrified Forest 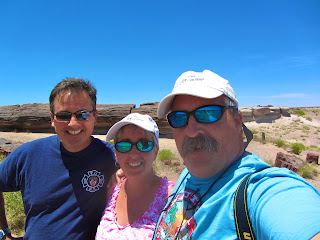 Now the Painted Desert
The Painted Desert runs from the Grand Canyon in a Southwesterly
direction to the Petrified Forest.
It received its name due to the high concentrations
of various minerals in the soil
that give this desert a particularly colorful appearance.
Our visit was during the height of the day.
Had our timing allowed us to come early or later
when the sun was lower,
the colors would have been even more dramatic. 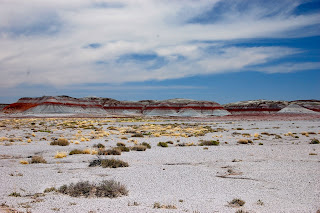 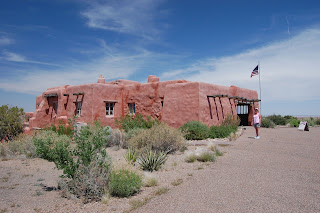 The Inn was constructed 1937-1940 and was quite the place in its day.
Inside, the walls are covered in Murals that were painted by the famous
Hopi Artist Fred Kabotie.
His murals all reflect life of the Native American People who called these lands home.
The Salt Lake mural below tells the story of two young Hopi men as they walk 230
miles round trip from their home to the Zuni mesas, passing through what is now
Petrified Forest National Park.
They were on a salt collecting journey. It was not only a physical journey;
it was also a sacred journey. 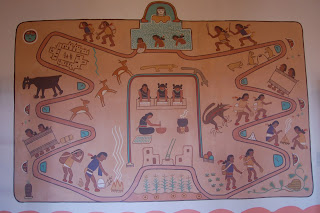 The view outside the inn is breathtaking and changes with the light. 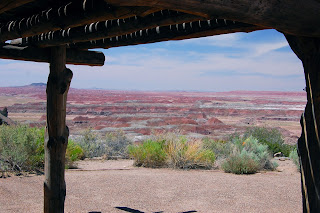 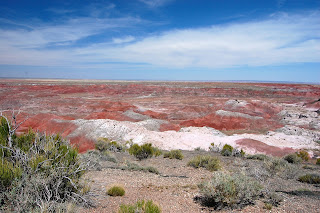 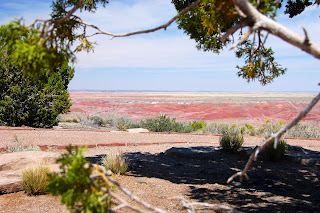 Inside the inn, the colors reflect the beauty of the desert. 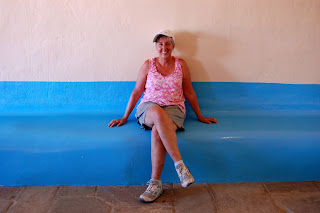 Route 66
This area of the country, now traversed by Interstate 40, is the land that previously
was crossed by waves of post war travelers on on US Route 66.
From Oklahoma city to here, our path west has paralleled, or laid on top of, the old
road bed of that famous highway.
Route 66 served as a major path for those who migrated west,
especially during the dust bowl of the 1930s, and it supported the economies
of the communities through which the road passed.
People doing business along the route became prosperous due to the growing
popularity of the highway, and those same people later fought
to keep the highway alive in the face of the growing threat
of being bypassed by the newInterstate Highway System.
Route 66 crossed right thru the middle of the Petrified Forest and
along the route is a reminder of those days gone by. 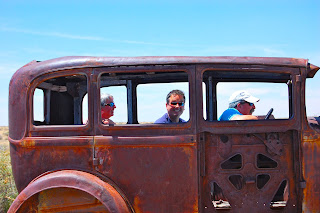 As a young child, our family took many summer-long vacations out in this area,
and we definitely traveled right over this abandoned roadbed upon
which I stand and take the picture below.
Standing here, on the old roadbed, looking west,
you can almost hear the old cars whizzing by, the sounds of Elvis, or Jimmy Dorsey
playing on the AM radio. 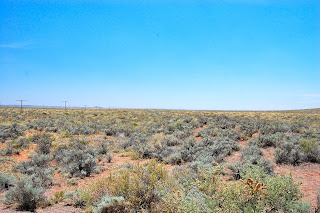 Tomorrow we will once again come out of the mountains,
take I40 west, and re travel the same road we took last week
as well as so many decades ago.
And tomorrow when I steer us down the ghost of old Route 66,
I can't help but feel a sort of melancholy for those old times,
and old places
now lost, but still alive in our hearts and our memory.