Today we hit the road early and traveled 3hrs south from Yellowstone to Grand Teton.
Since we were camped in Gallatin National Forest just north of West Yellowstone, we had the pleasure of traveling one more time thru the park.
On the way we spotted this classic rig...
A 1956 Airstream Trailer being pulled by a 1956 (i think) Dodge Pickup.
It just can't get any cooler than that! 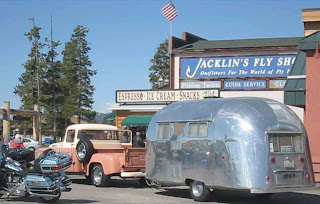 Seeing this rig just brought back a flood of memories of my own journeys as a child with my family, and our cross-country trips from NJ to the west coast and back, camping all the way.
We had a 1964 Pontiac Catalina, and a 1964 Nimrod Camping trailer.  Back then much of the interstates were not built and lots of time was spent plying the back roads of America.
We used to blow out the overloaded tires almost daily... Seriously.  We went thru them like candy!
I remember getting vapor locks (remember carburetors?) climbing the dirt roads over the passes, the car would overheat then stall, and I would be scared to death that we were never going to get out of there.
Maybe that's why I spend so much time preparing for a trip like this, putting newer heavier tires on a new camper,  planning stops, researching ahead of time where I can find diesel fuel etc etc.
But today, as I travel with my turbo charged computer controlled diesel engine, with hardly a care in the world, I think back fondly of those days long gone by and marvel at just how difficult it had to be for my father to pack up 3 screaming brats and set off on those roads of yesteryear.
Much of the places we visit are places we visited then.
Anyway - enough of memory lane.
After leaving that classic rig behind we headed East and South thru Yellowstone and crossed the Continental Divide not once...  but 3 times! 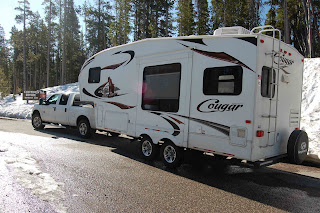 This was also the location for todays self portrait. 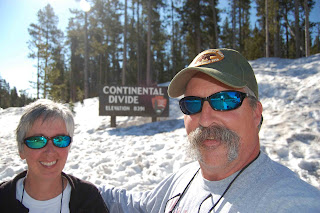 We then crossed into Grand Teton National Park and was stopped by another herd of.....
You said it....  Bison!
Looked like one had broken thru a fence and that got the whole herd on the move. 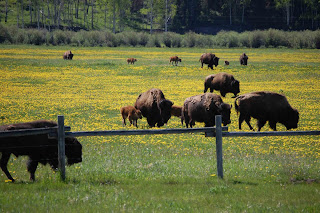 But we came to GTNP for the mountains, and were once again not dissapointed.
Below is how the mountains looked this morning.
This is a picture of Mt Grand Teton (13,770') 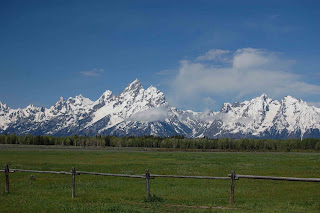 This is almost the same shot taken last September.
The seasonal changes are quite striking. 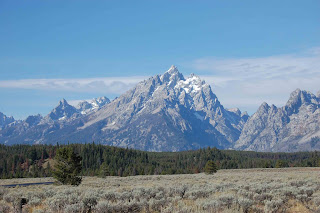 After getting settled into our camp at the Gros Ventre Campground in GTNP, I attended to some business and then we headed off to Jackson, Wy for lunch and shopping.
While Kate went shopping I got a couple of hours of business phone time in.  It was a very productive day.
Once Kate was all shopped out, we had one last goal for the day...
Our dear friends and ex-neighbors Bill & Jean spent their Honeymoon skiing in Jackson Hole way back in 1967.  At that time, Jackson Hole was a tram and a couple of small hotels waiting for the crowds to come.  (remember - if you build it they will come?)
We wanted to find that hotel if it was still standing, and take some pictures and send them to Bill & Jean.
(I have to give Kate credit for the idea...  that's just who she is)
I had done some research on the web and had an idea what the place looked like - but did it still look the same??
When we started to ask people in town...  (it seems like everyone is younger than me all of a sudden)
they seem amazed that someone actually came here in 1967 to honeymoon and was still alive.
Come on people.   We are talking 1967    The year of the "Summer of Love"
Some notable albums:  Cream: Disraeli Gears,  Beetles: Sgt Pepper, and Magical Mystery Tour,
Jimi Hendrix:  Are you Experienced.  Just to name a few.
Anyway....
We finally found an archeologist who could remember back to those ancient days and point us in the correct direction.  We got the pictures, they were sent to Bill & Jean and we are happy to say Mission Accomplished.
So...  That was an extremely long way of saying:  Here is a picture of Teton Village & The Jackson Hole Tram. 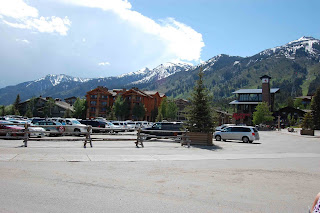