Today, after a nice pancake breakfast, we set out with the Doodles to explore the local area.  We also had to do some light grocery shopping and refill one of our 30lb propane bottles.
First stop was the beach.  It overlooks the Puget Sound,  the Straight of Juan De Fuca & and just happens to be the location of todays self portrait.
Over Kates head in the distance are the San Juan Islands & to the left of me is the Straight. 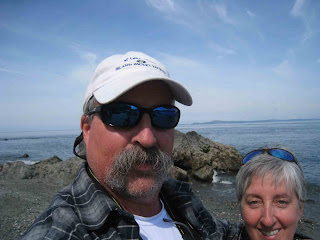 This is the same beach looking northward.  Around the corner is Deception Pass 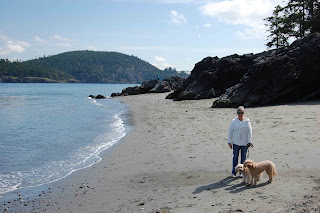 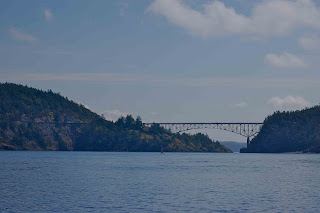 Kate getting all reflective on the coast. 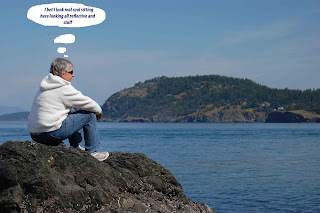 Here is a small sailboat running with the current heading into the pass. 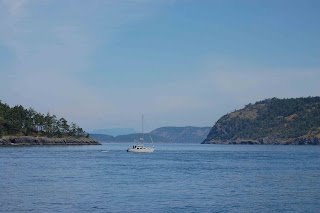 This is the North Span, looking towards Pass Island. 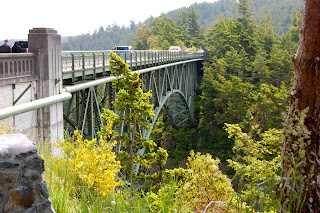 This is looking East from the Bridge.  The small island in the right Center is Ben Ure Island. The island became infamous for its activity of smuggling illegal Chinese immigrants for local labor. Ure and his partner Lawrence "Pirate" Kelly were quite profitable at their smuggling business and played hide-and-seek with the United States Customs Department for years.
During transport, Ure would tie the illegal immigrants up in burlap bags so that if customs agents were to approach then he could easily toss the bags overboard. The tidal currents would carry the discarded immigrant's bodies to San Juan Island - to the north and west of the pass- and many ended up in what became known as Dead Man's Bay. 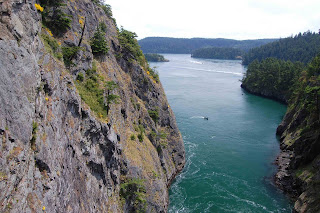 This is looking West from the Bridge approach...  Our earlier shots of the bridge and beach were from that point of land in the distance.  Puget Sound and the Straight of Juan De Fuca are immediately behind that point. 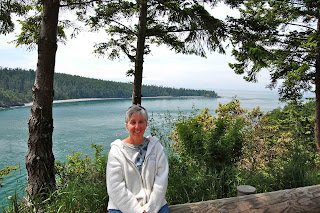