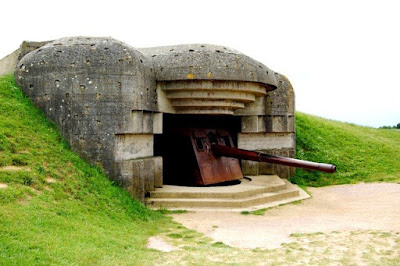 We visited Pointe du Hoc, a site where about 300 army ranger scaled a 200 foot high cliff to take out a battery of German guns that would have had range over both Utah and Omaha beach invasion areas. Of the 300 that started the assault only about 60 survived, but they did take out the gun crews and accomplished the mission. The sad part of this was that the guns had been removed and the assault was not needed.

The ground around the Pointe has been left undisturbed for all of these years and is now maintained by the US Govt as an historic site. From all the countless bombs that were dropped on this site prior to the invasion to try and destroy the guns, the area literally looks like the surface of the moon. There are just enormous bomb craters everywhere. I did not post a picture as I don't think a small one would do it justice.

The picture posted is of a nearby German Battery of 4 well preserved guns that were taken out without destroying the guns so they remain pretty much as they did in 1944.
Posted by GregK at 1:55 PM