Seems like there is always something going on in
Quartzsite when the RV's invade.

It must be all those satellite signals, the moon and stuff… 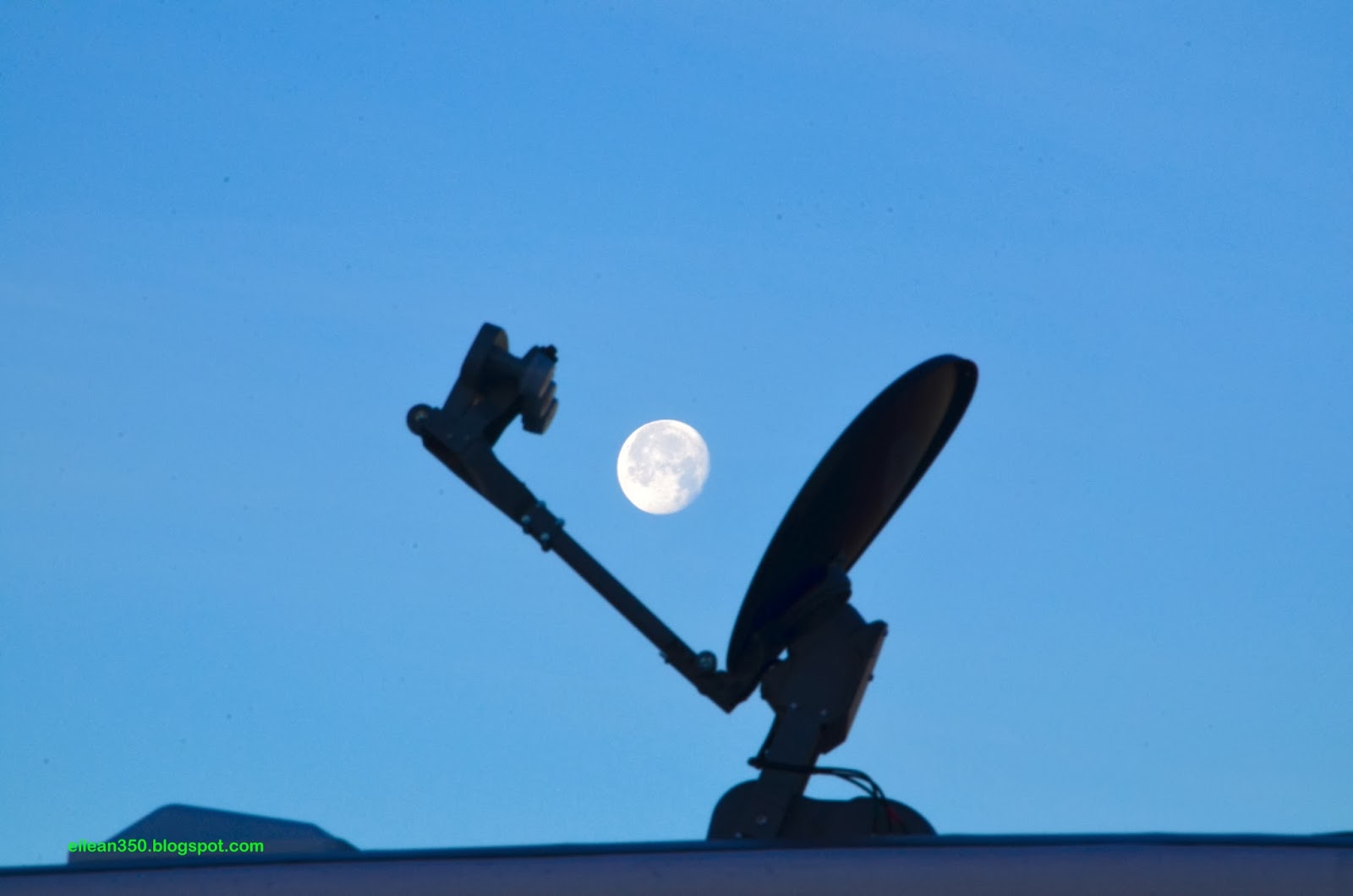 Yesterday and this morning however a new visitor arrived upon the scene.
A Hot Air Balloon made an appearance over the
circle and slowly drifted - often just about the ground - slowly across the
desert, slowly towards the Northwest. 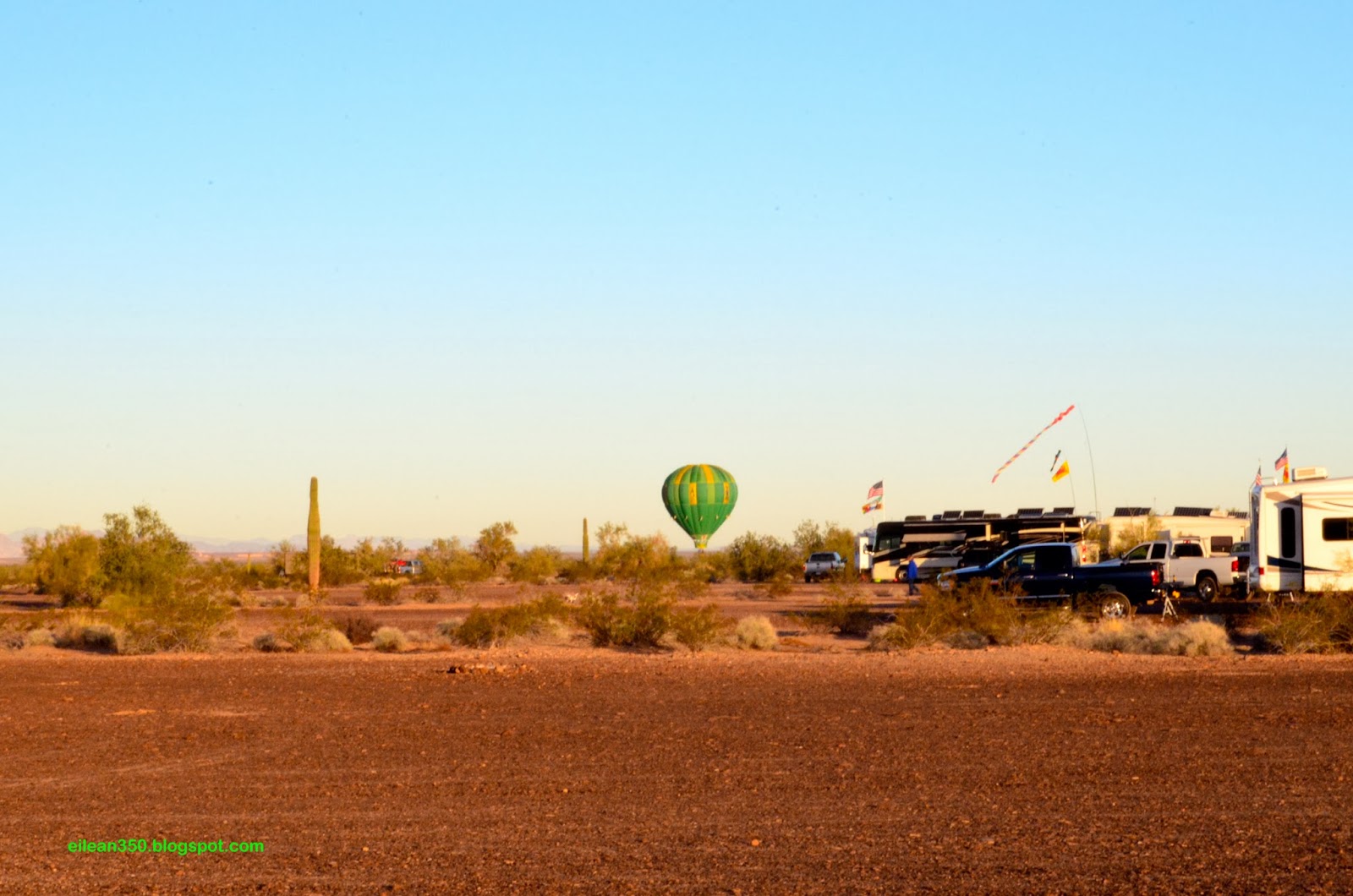 I was inside and received a text from Ron alerting me to the visitor.

I immediately went on a foot chase to position myself.

After bashing cross country a mile or two thru numerous washes,
I finally got to where I had a nice unobstructed view. 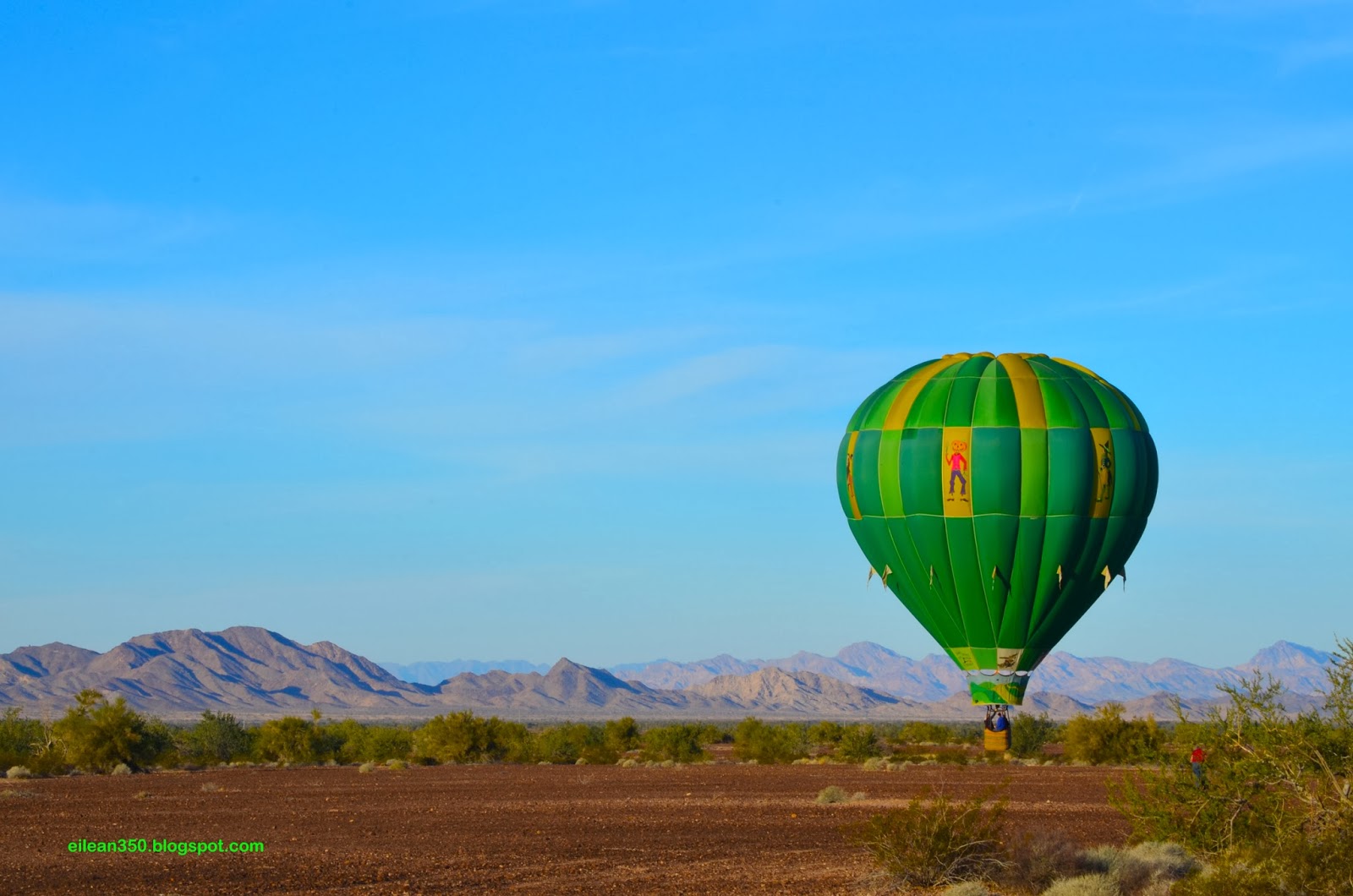 Here the waning moon shares the sky with my big green visitor.
To the left of the cactus you can see the chase crew making contact. 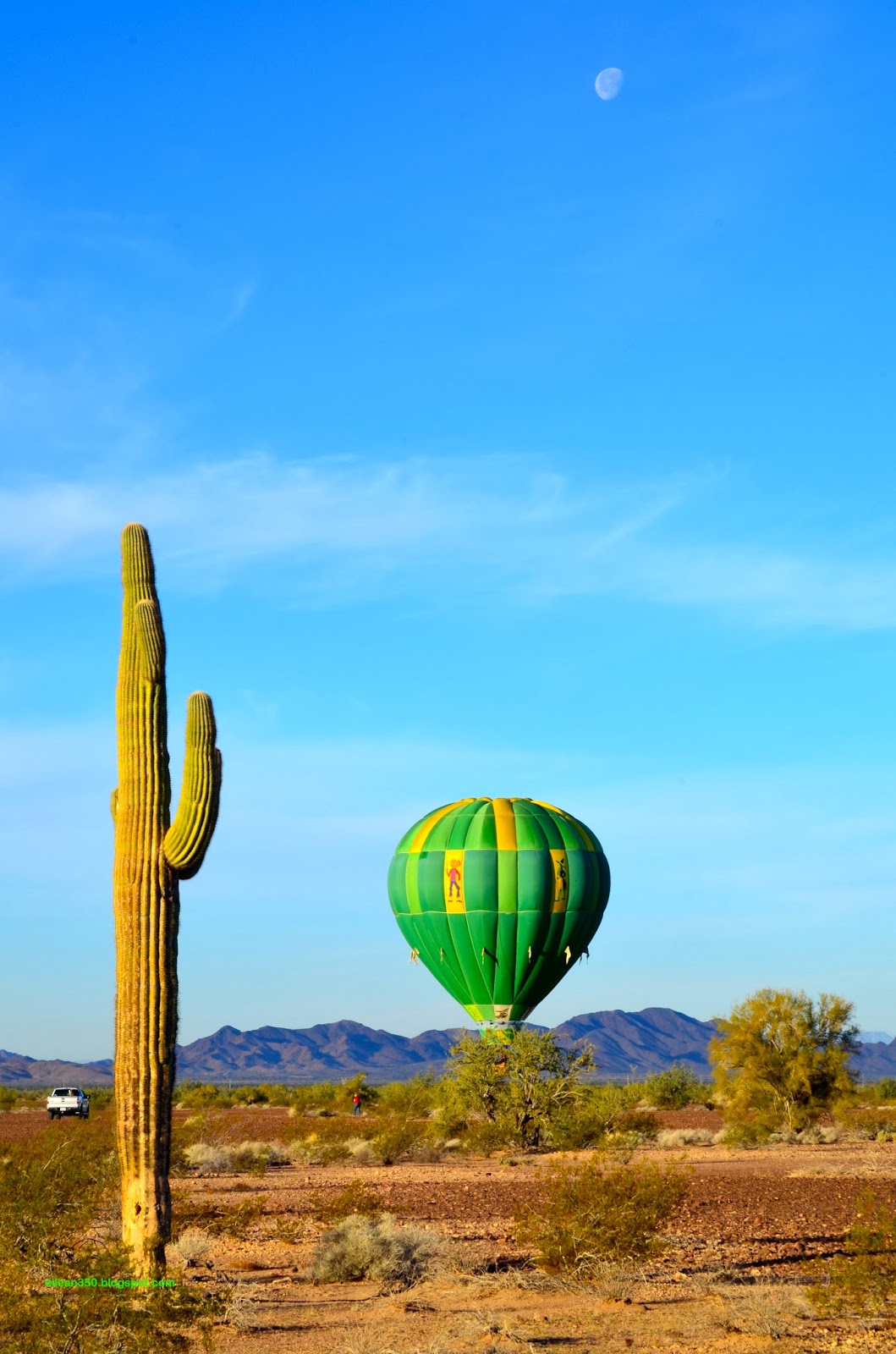 Now here I was about 2 miles from the RV and had to turn around and walk back
into the sun with no sunglasses…  I left them in the camper.
Such is the level of roughing it these days!

Later after everyone was up and about we went on our morning walk minus
Kristi who was feeling a bit under the weather. 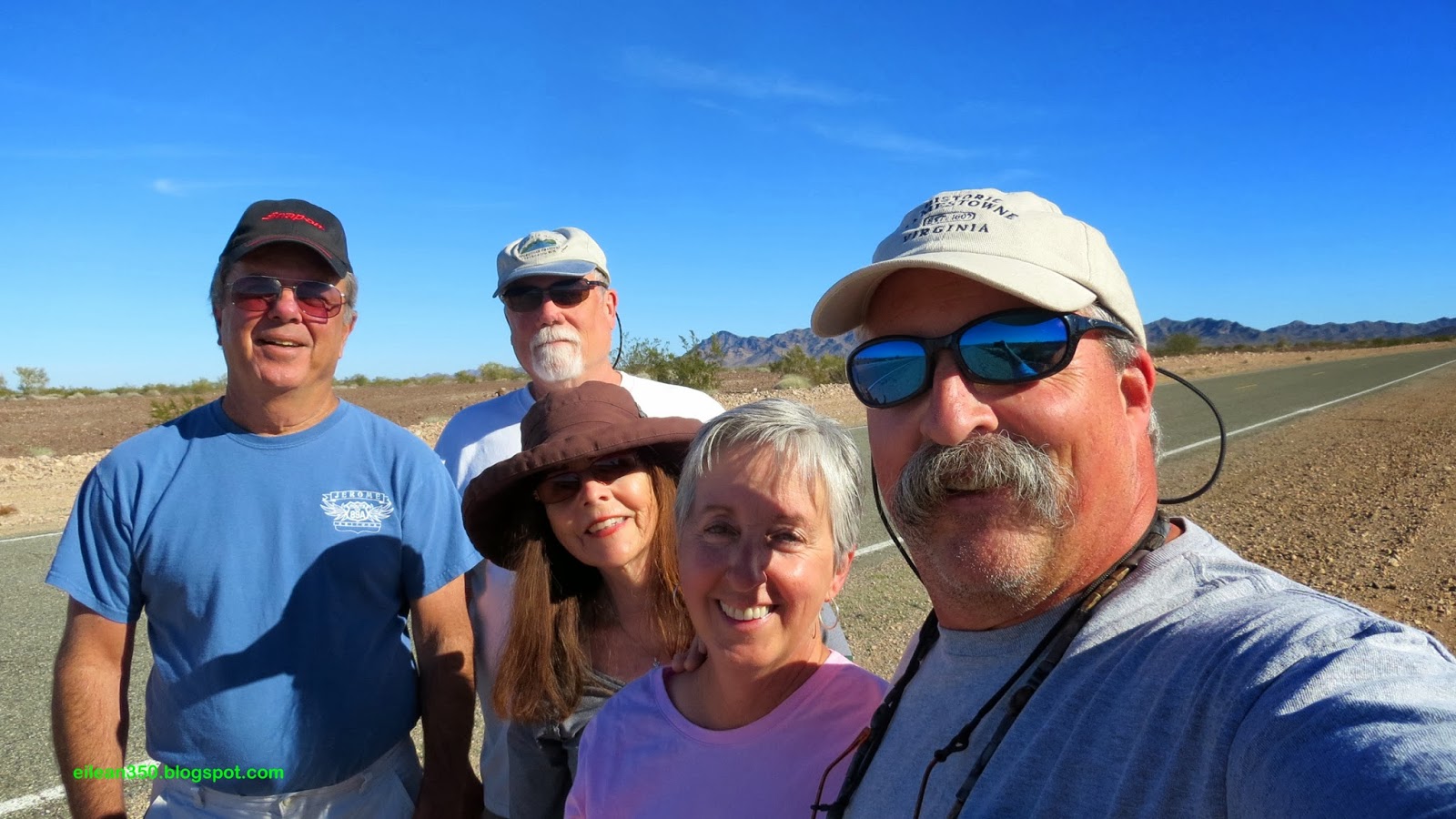 Today Kate and I had to drive up to Lake Havasu City to pick up a package
that had been sent from the office.
Its about an hour and a half each way but a pretty drive and we've never
been to Havasu so it was a good opportunity.

Along the way we paralleled the Colorado River for much of the ride. 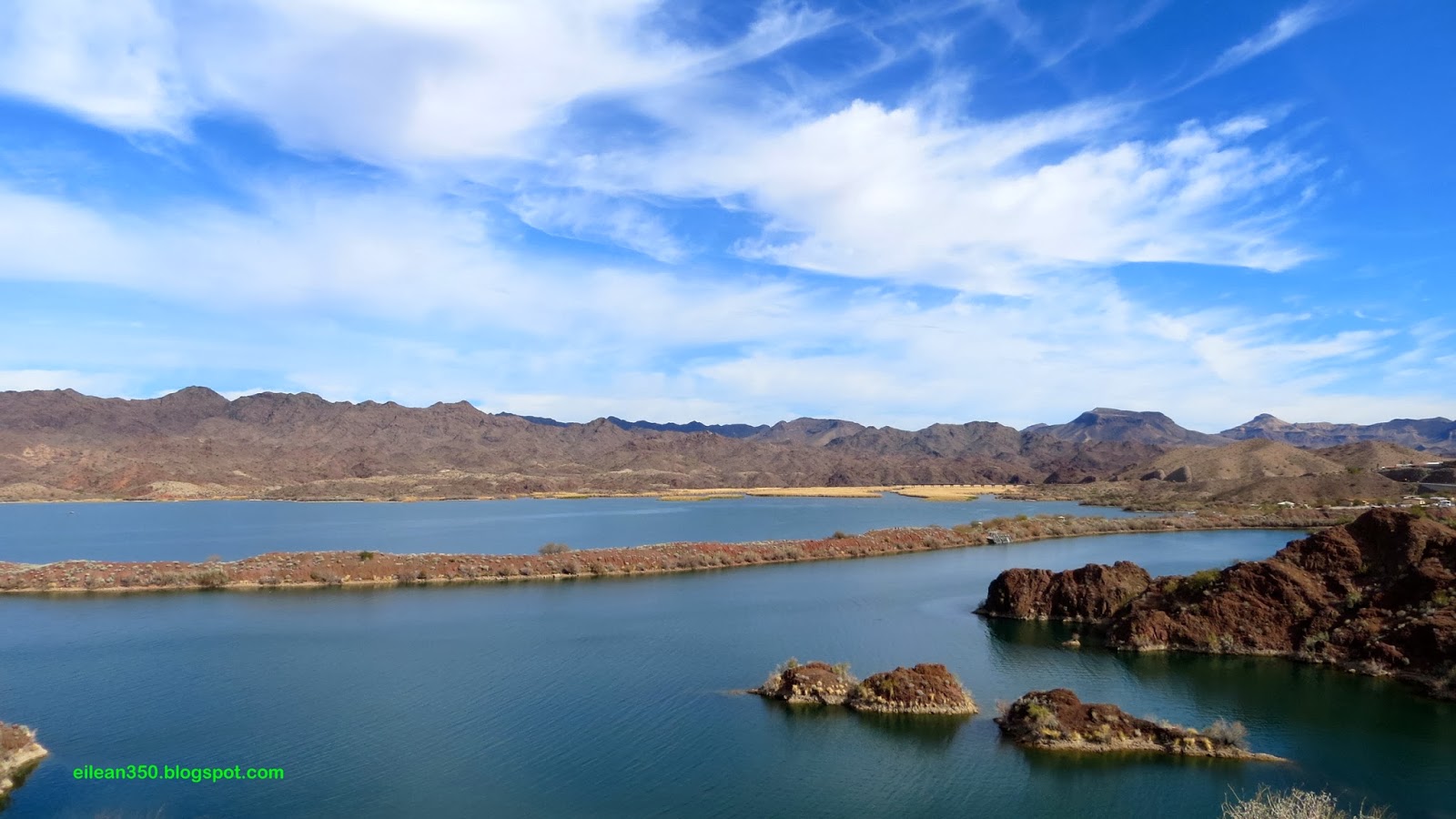 LHC is famous as the home of London Bridge.  Having been purchased
and moved, piece by piece to Arizona where it was reconstructed.
It was this bridge that put Lake Havasu City on the Map changing it from
a tiny dusty desert town into a resort destination. 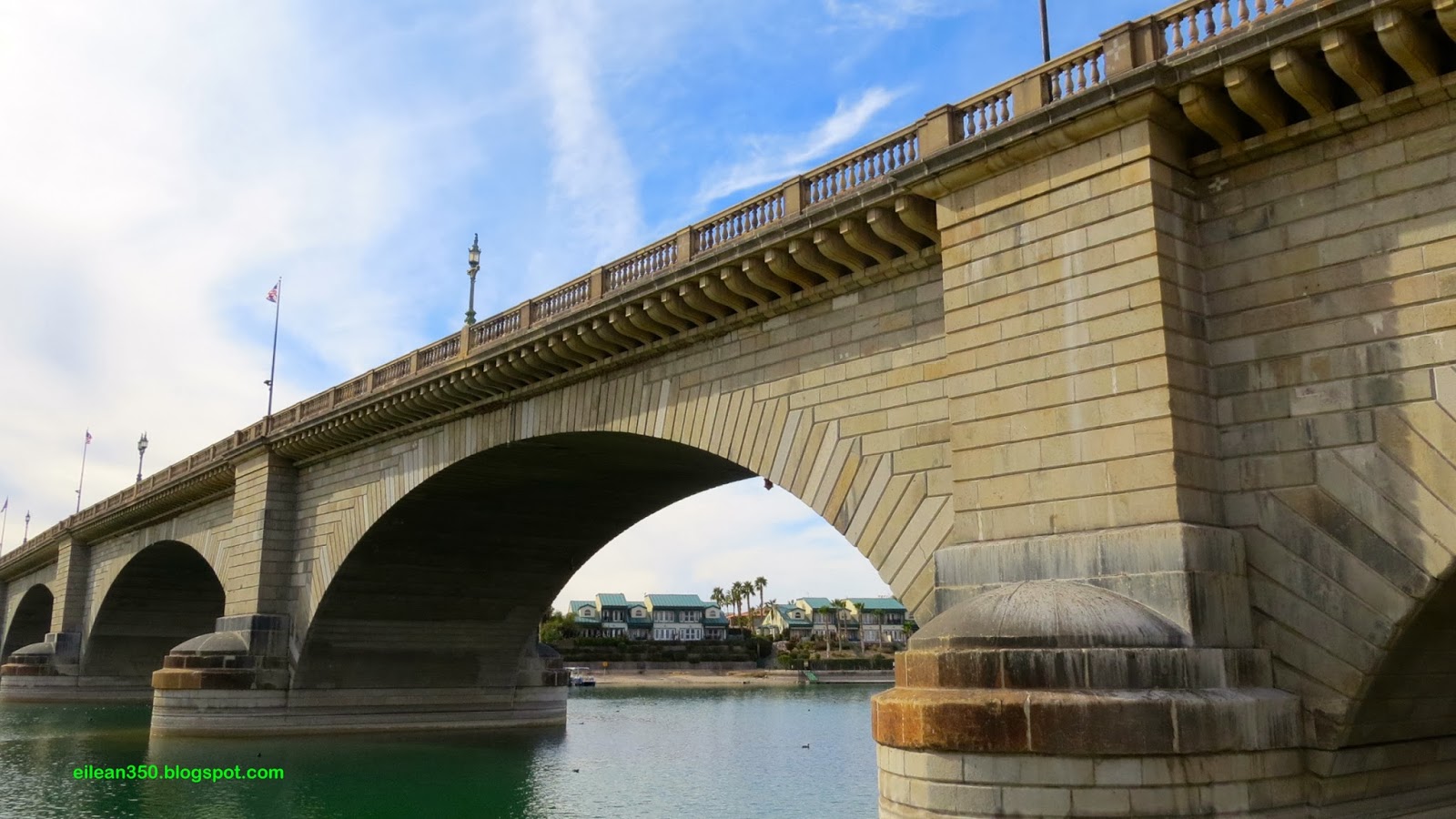 The bridge was actually built on dry land and then the  channel was dredged
beneath it creating the island to which it now connects.

At the eastern end of the span are shops and walkways under the span. 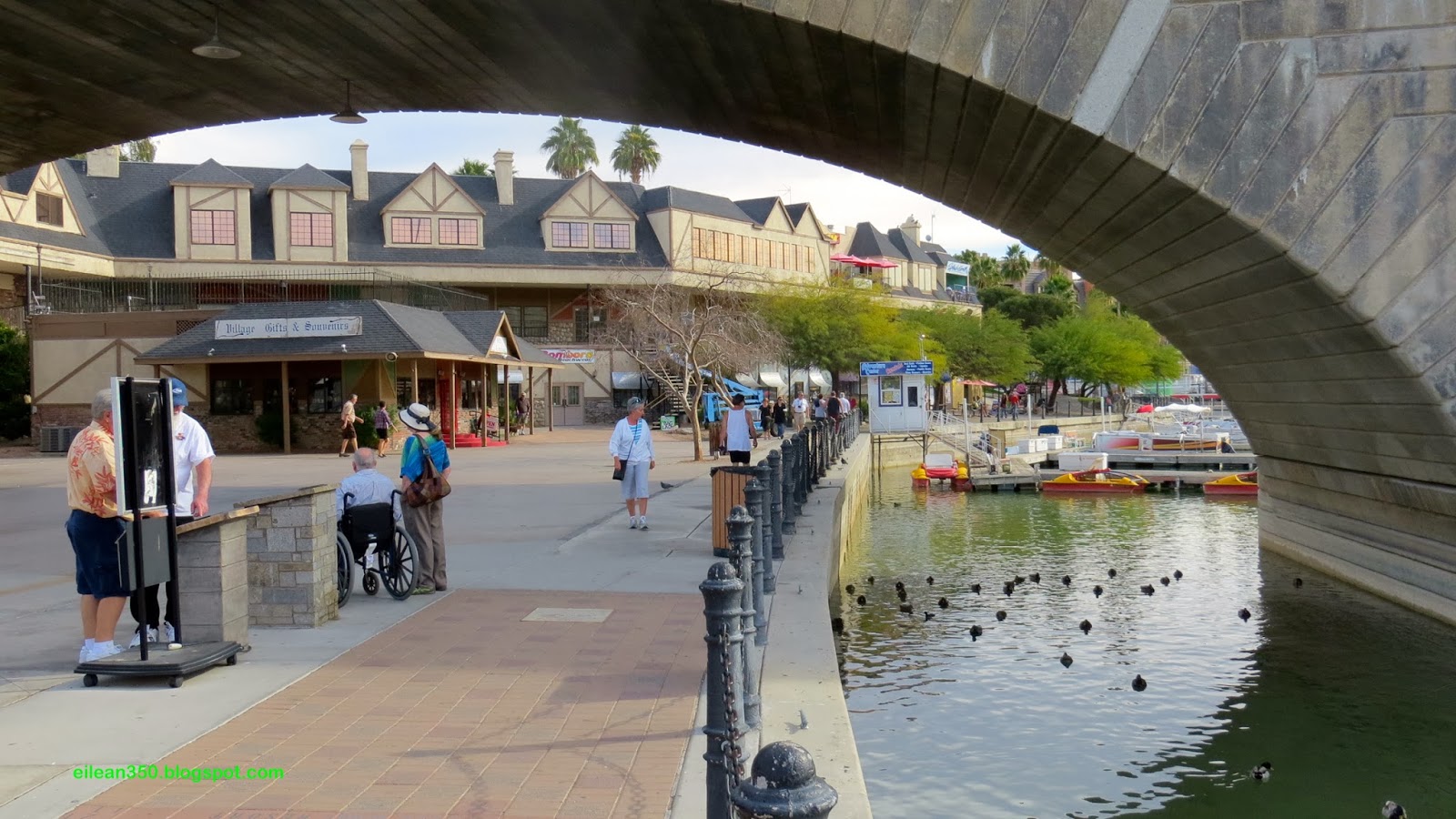 From up on the bridge. 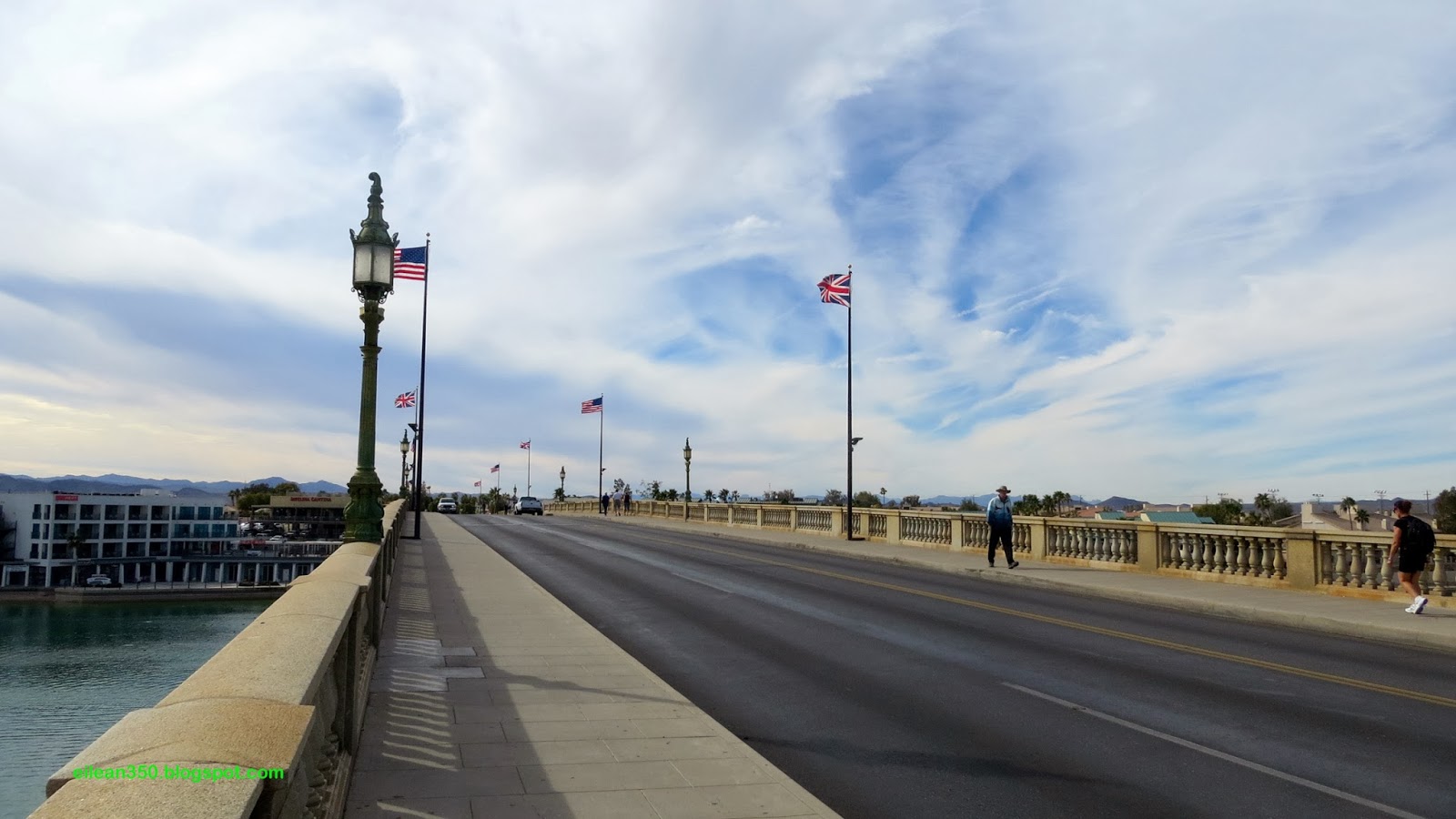 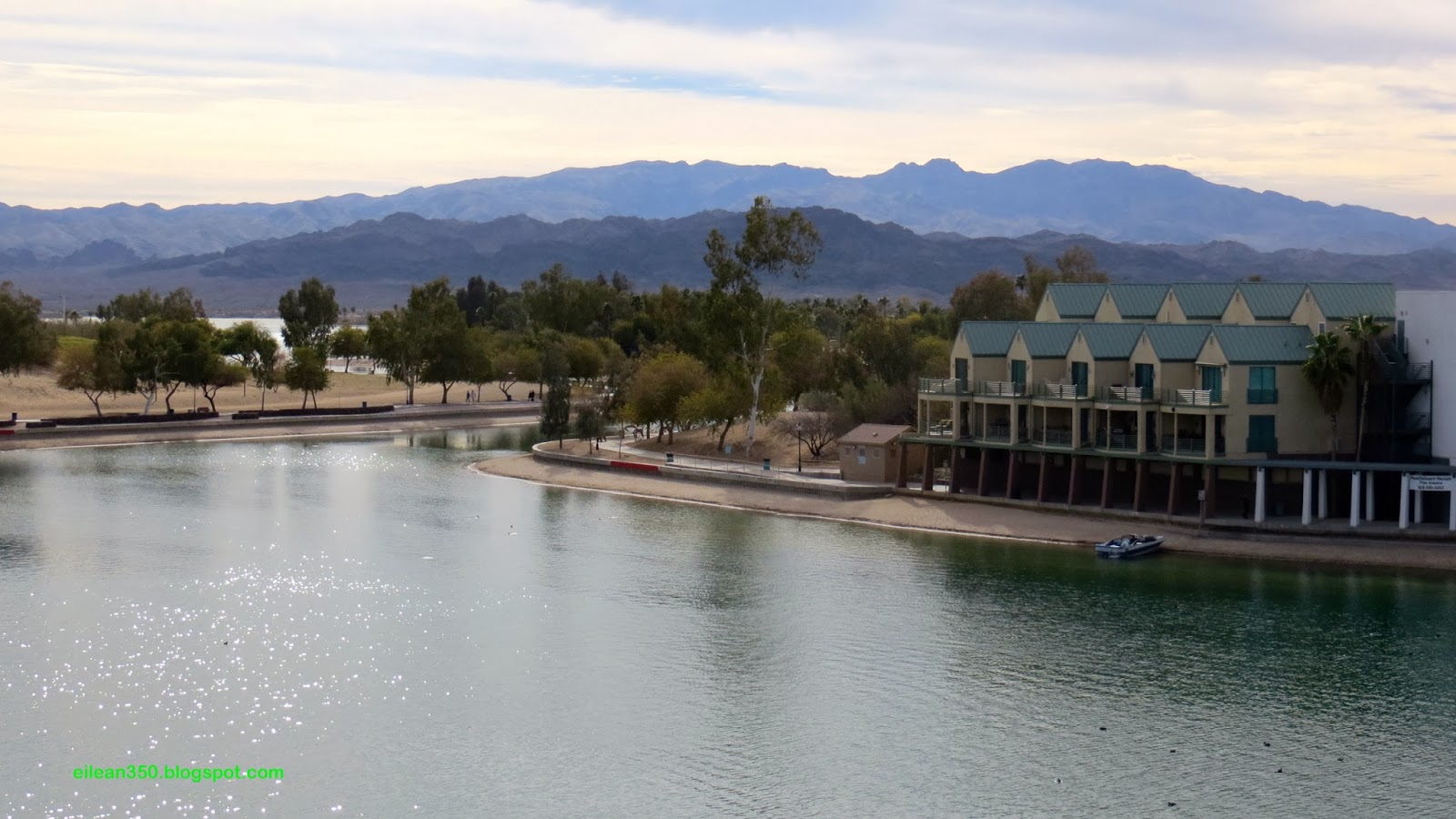 Today was the last day of the Montana Rally and some of the folks
have already left.  Many will be staying longer and we will be here till Friday.

Even as our circle shrinks in size however - the desert around us continues to
fill with thousands of RVs from all corners of the country.

It is snowbird season once again in the Great American Southwest
and the flock is here.