Well the week has flown by and tomorrow we will be pulling out of
"The Q" and heading 80 miles south to Yuma.

This year in Q I've been forced to spend most of my time indoors.

Our hectic travel schedule the past month coupled with an upcoming
name change at my job has kept me locked up and working most of the time
that we have been here including the weekend.

The few times I did show my face in the circle I would hear the inevitable
but understandable "where have you been?" comments.

Most of the folks here are retired so to them the "W Word" (work) is no longer
in the vocabulary.   Heck...  most don't even wear watches.

To me its all a small price to pay for the freedom of
working in such beautiful and varied locations.

If I get tired of the view from the office window...
I move the office!

As in the past we have had aerial photos taken of the circle.

The one below was taken from an unmanned drone with a GoPro camera.
We are the 3 rigs circled in the upper left. 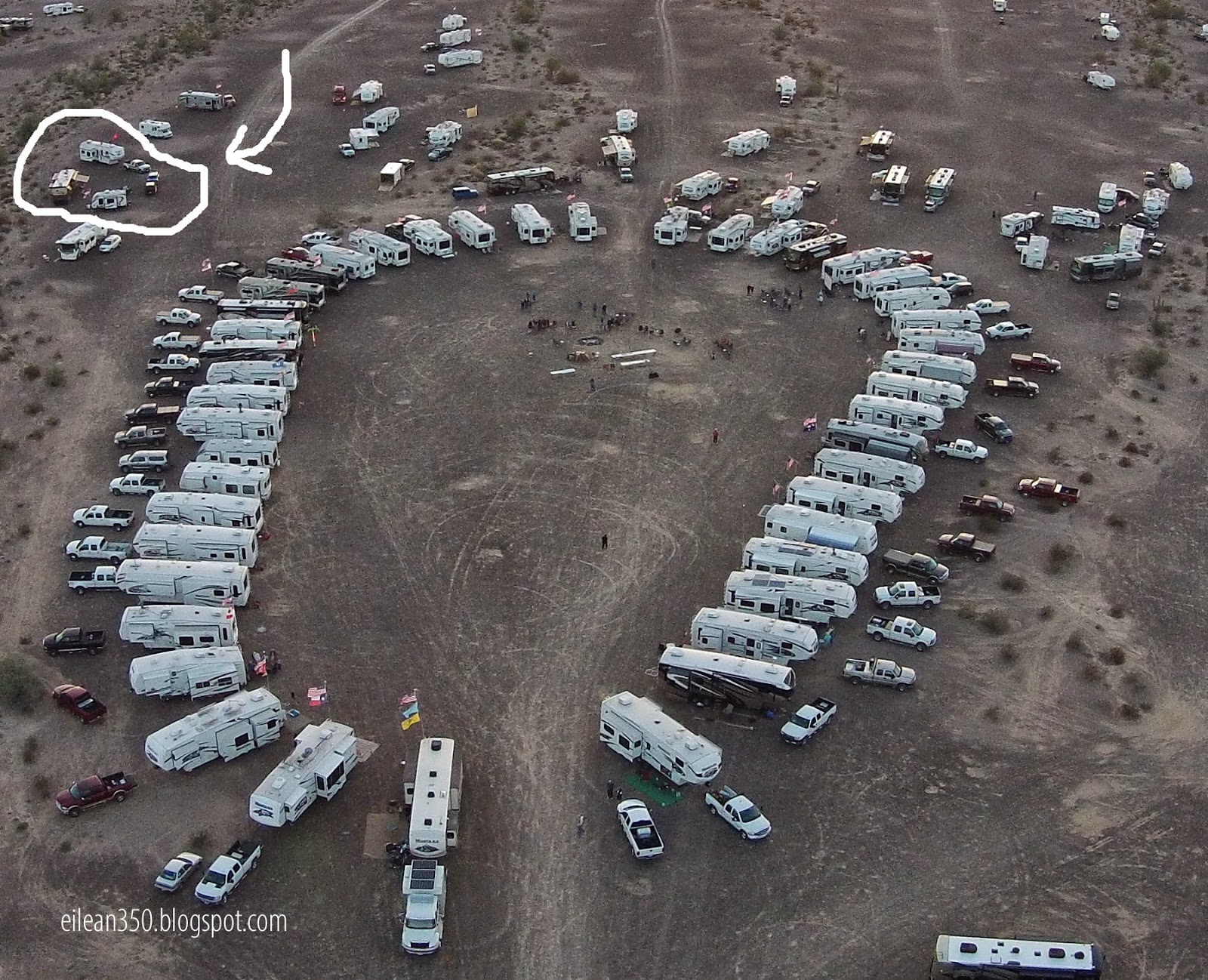 Ron strikes a pose at the grill.
He's a Salmon Grilling Fool! 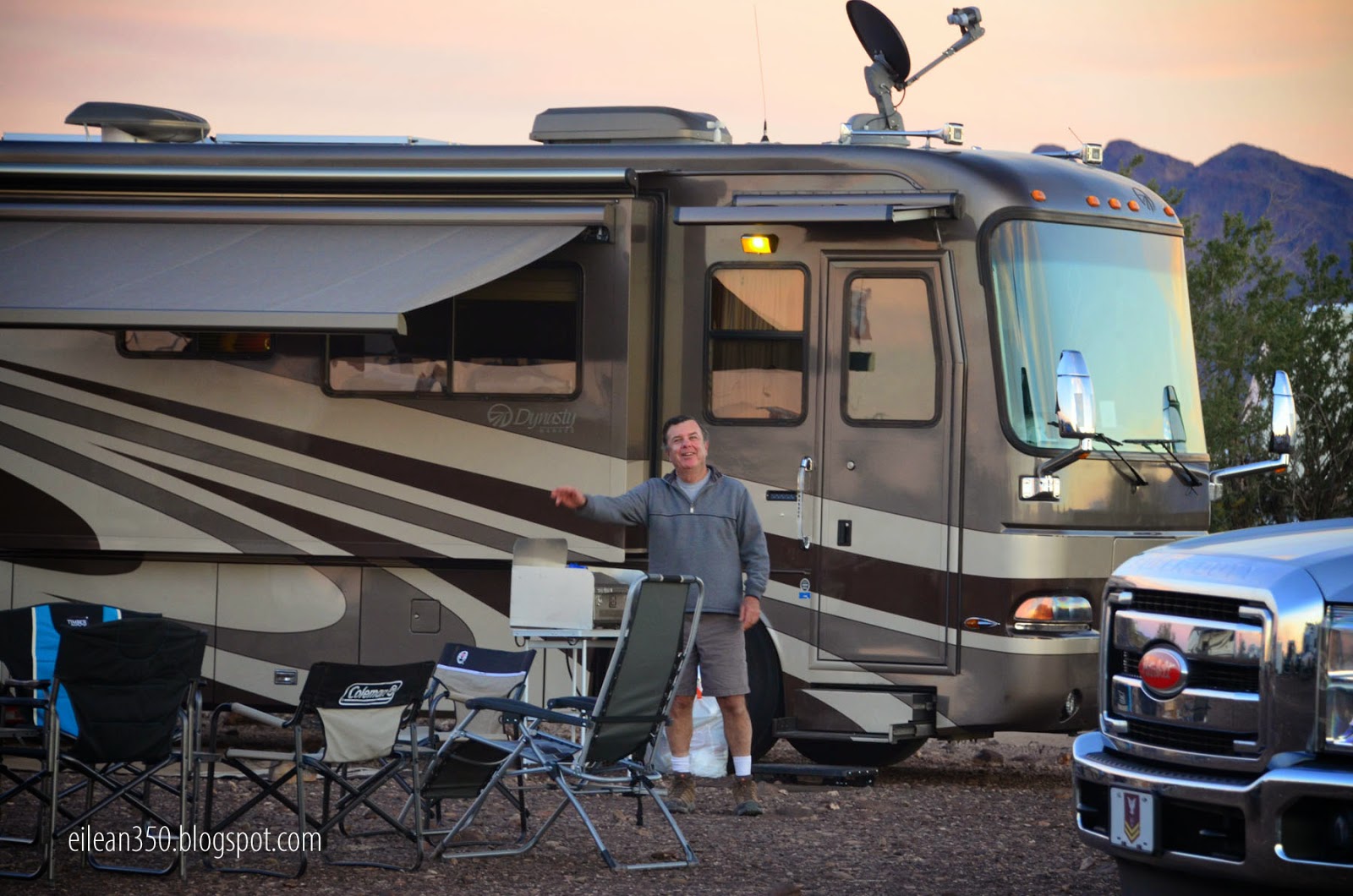 As the sky turns orange, I took this photo of the circled wagons.
Our private little encampment outside of the big circle. 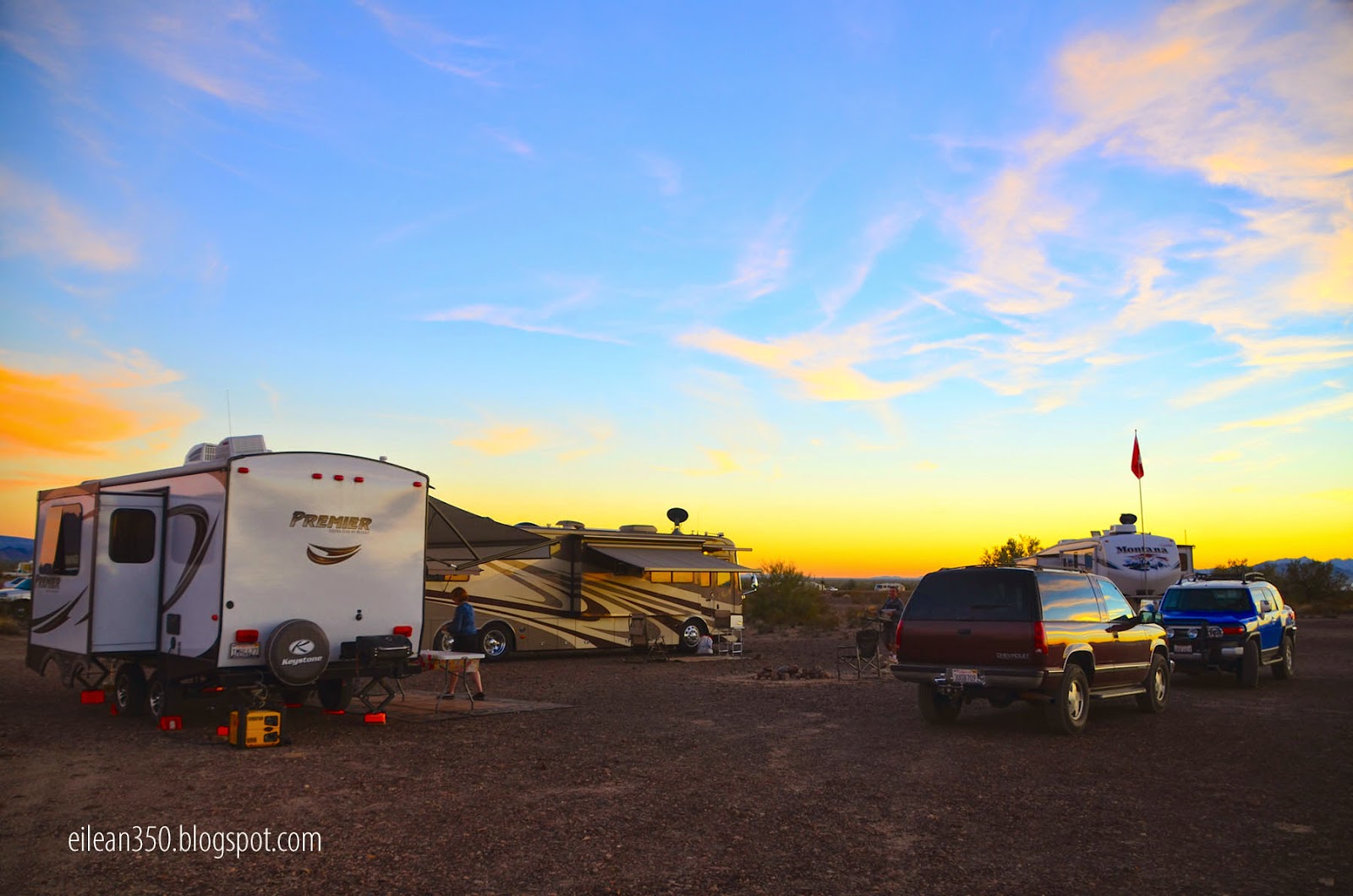 Continuing the tradition we started in Alaska - Ron and Kate
pose for the camera.
It began as a goof on all the tourists that we would encounter who would
always strike these poses when taking photographs.

It has now taken on a life of its own. 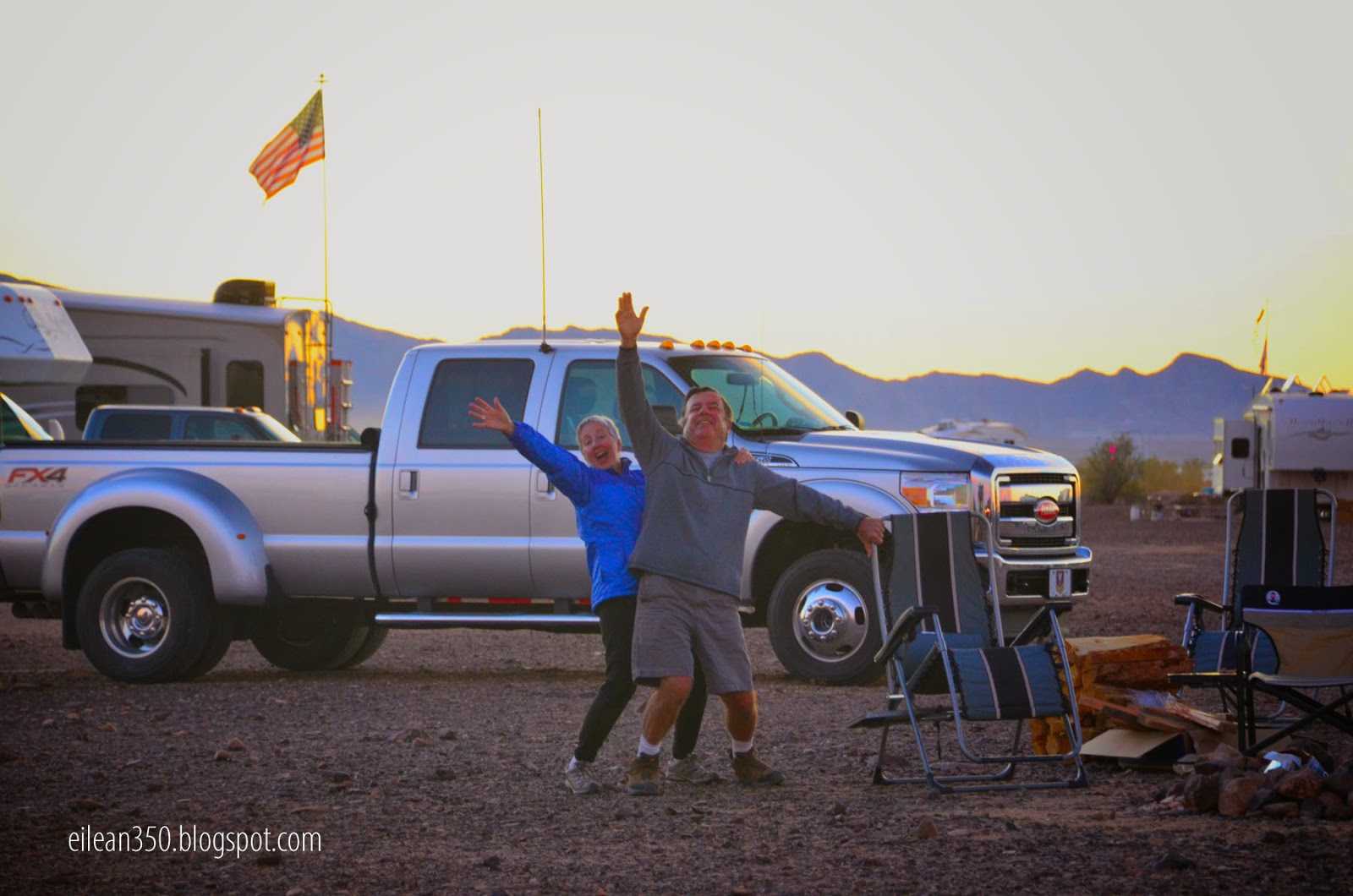 One of the great things about the west is the dry weather.

Each day the temps are in the 70's and each night as soon as the sun sets the
temps would drop into the 40's.  Great sleeping weather for sure.

Each night we would have a warm campfire. 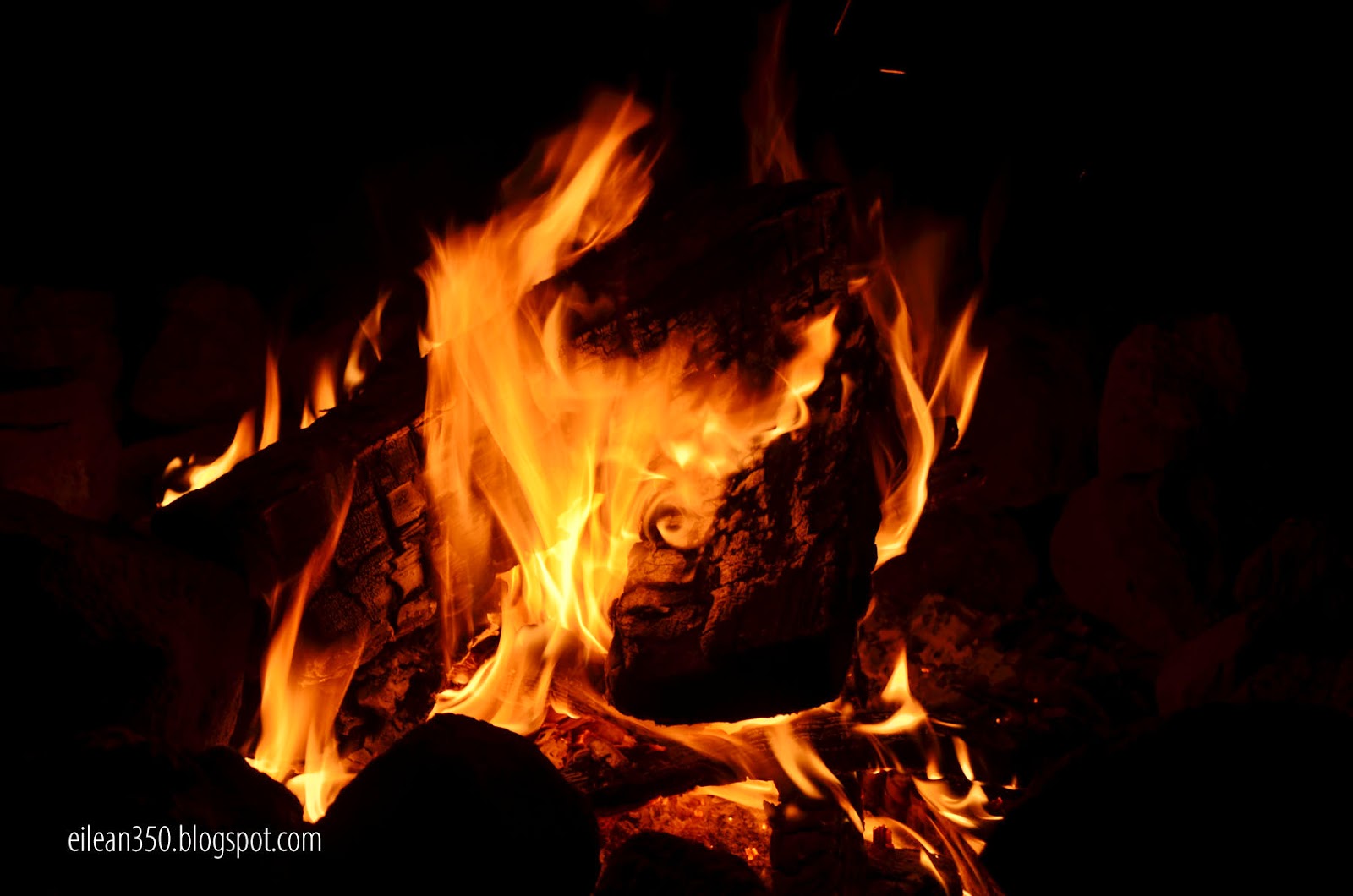 Desert sunsets are the best.
I have not messed with the colors in these photos...
these are the real deal. 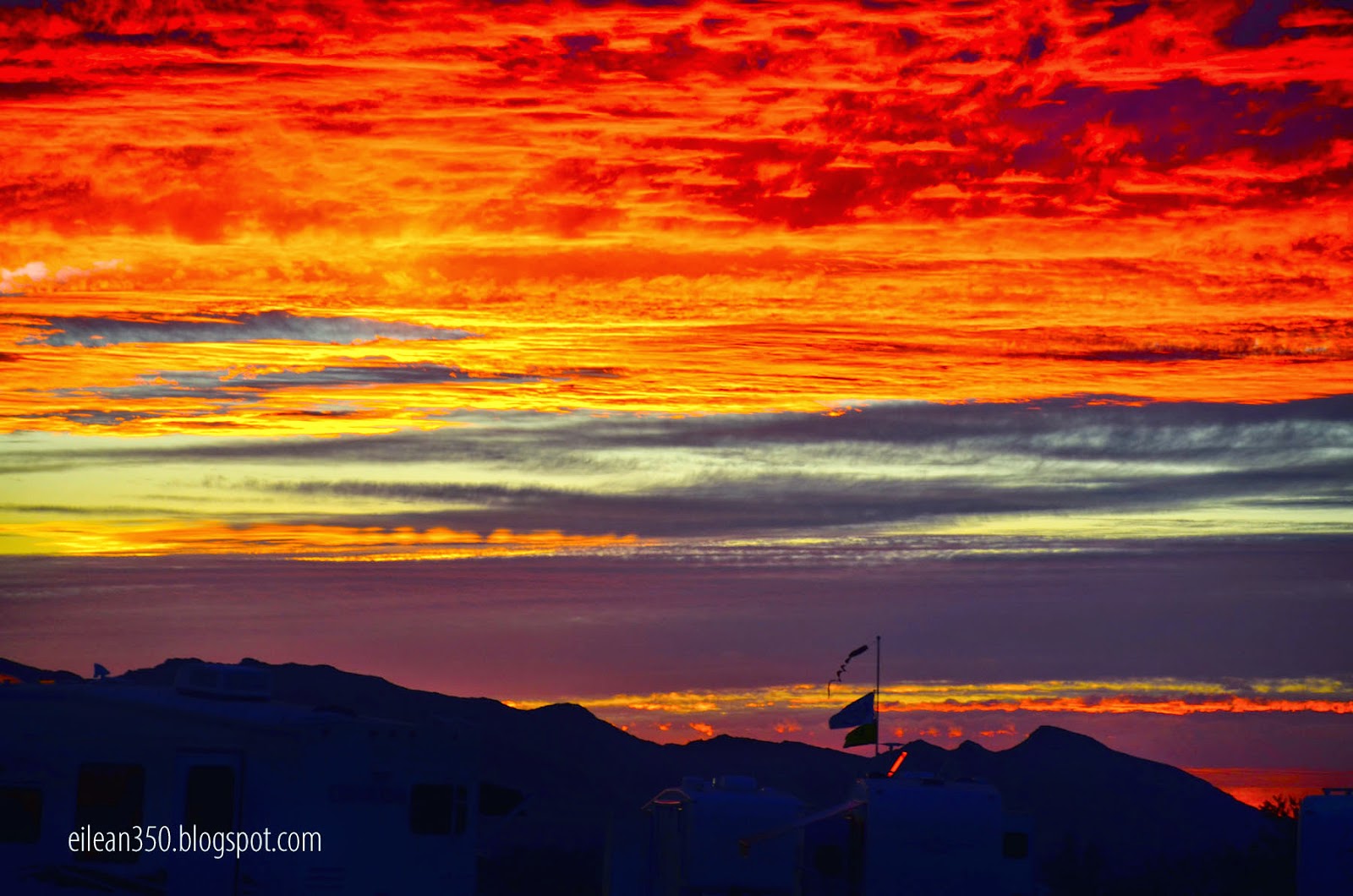 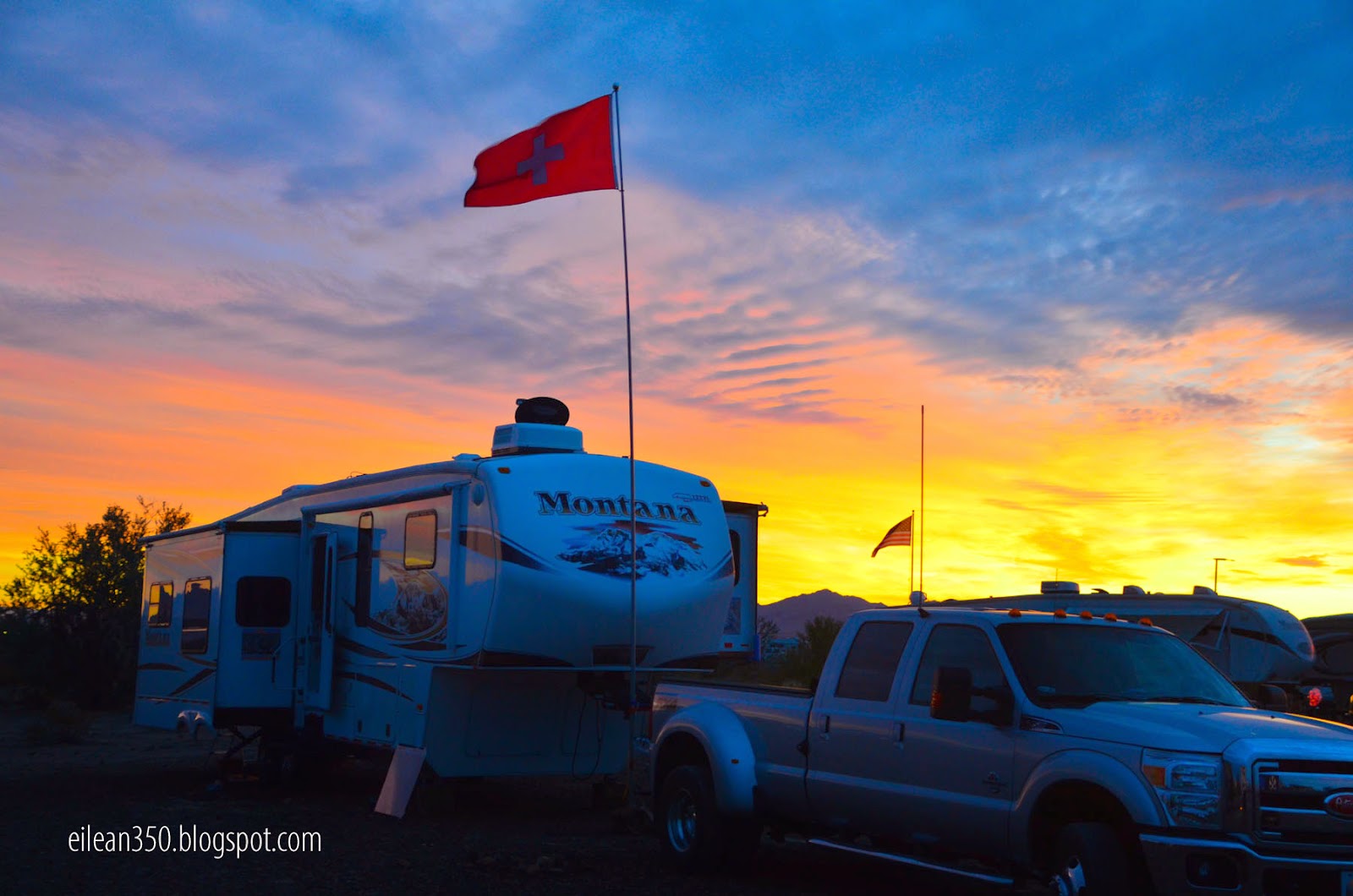 Tonight we launched "luminaries" - these miniature hot air balloons.
The rise hundreds of feet into the air and are carried off into the distance - riding
the gentle breezes until they run out of flame. 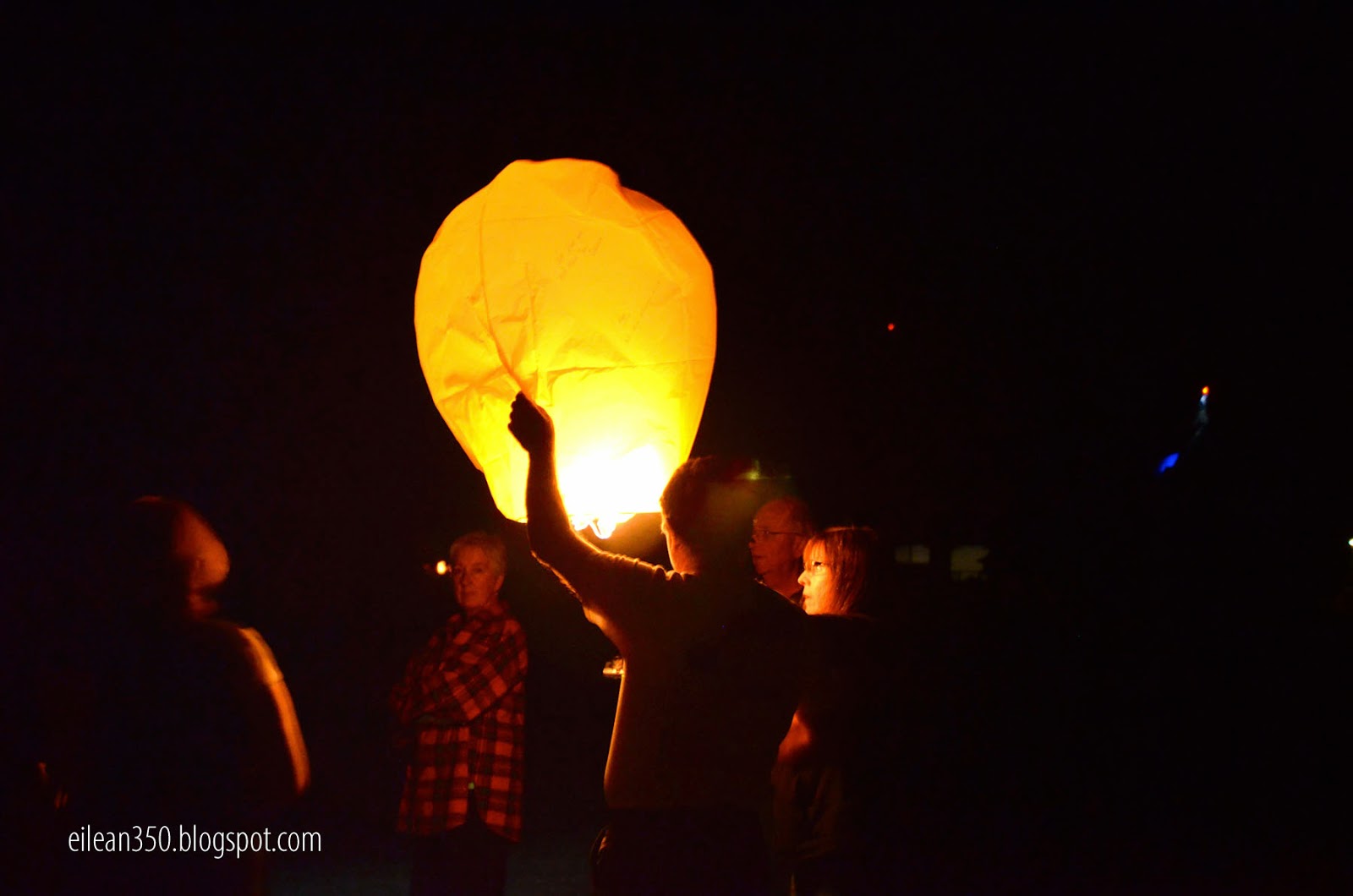 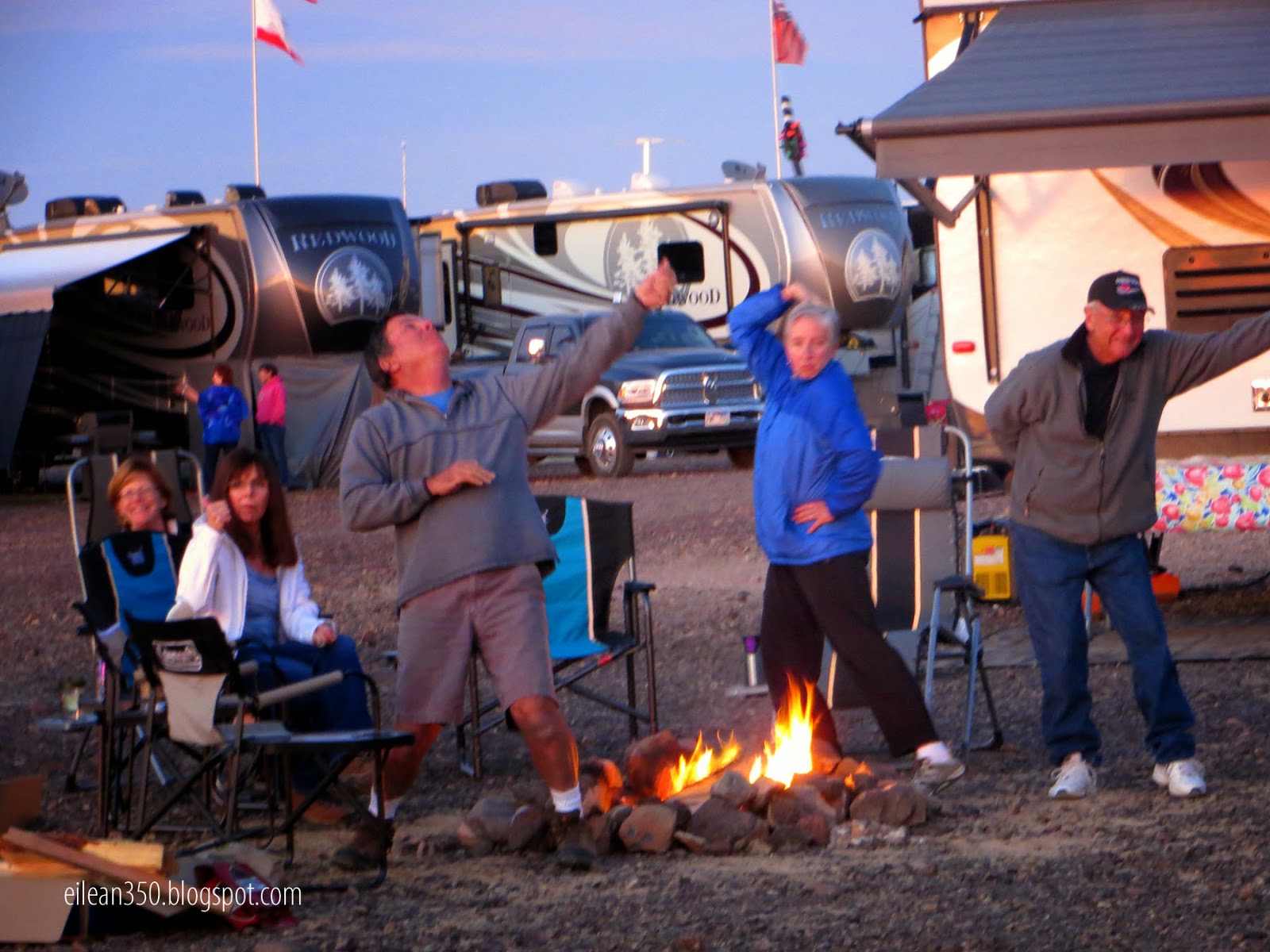 Quartzsite is a fun place.
Its sort of an old age playground without the swing sets.

The great thing in this playground is the quality of the toys.
Spending the kids inheritance is the order of the day. 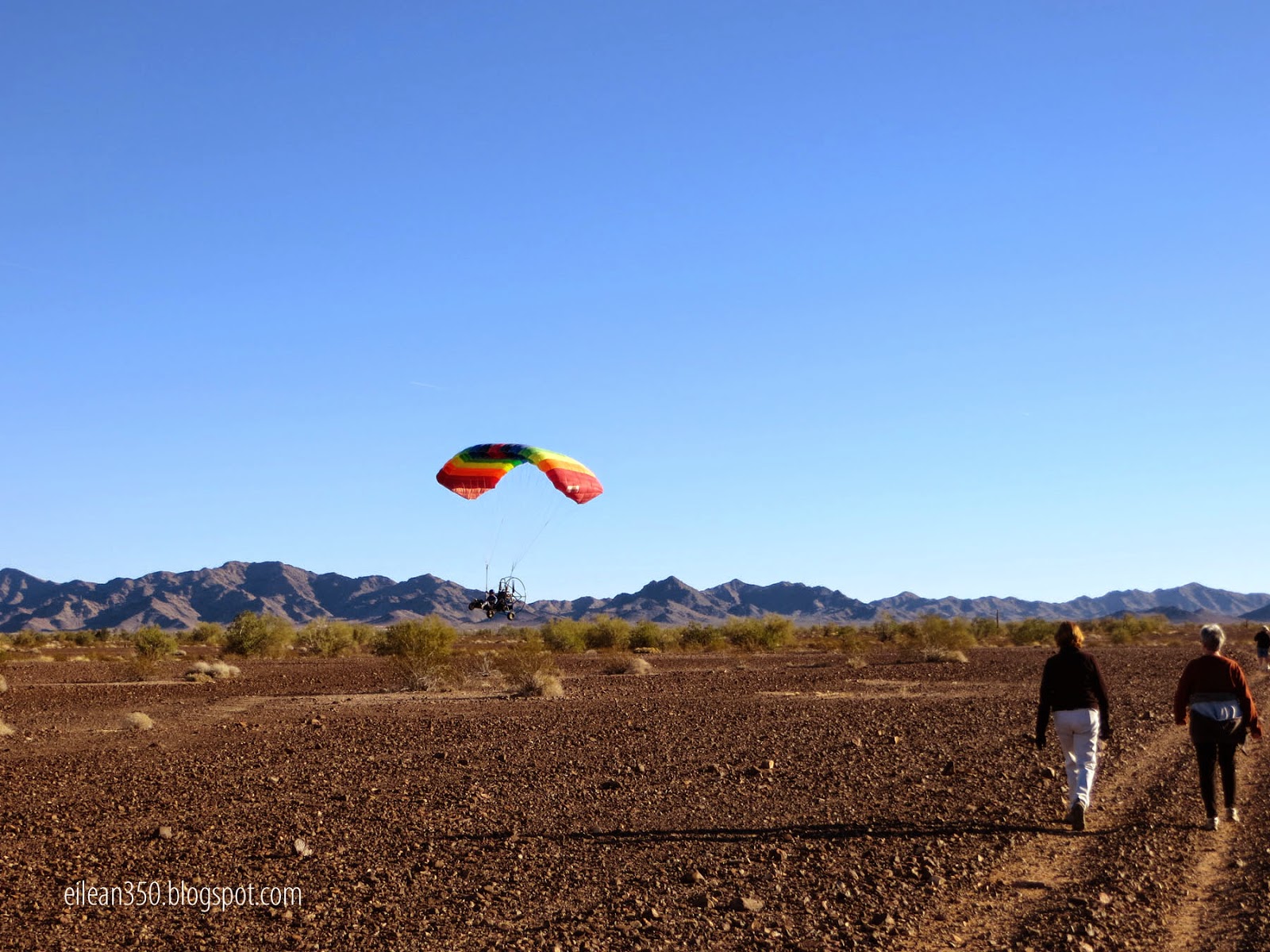 One of our fellow Montana owners took me for a spin in his Off Road Vehicle.
There are dozens of those ORV's out here running all over the wide open spaces.

I've been thinking of getting one so i jumped at the opportunity to take a spin.

We went for an 8 mile ride in the desert, on some pretty rough terrain.
It was a blast. 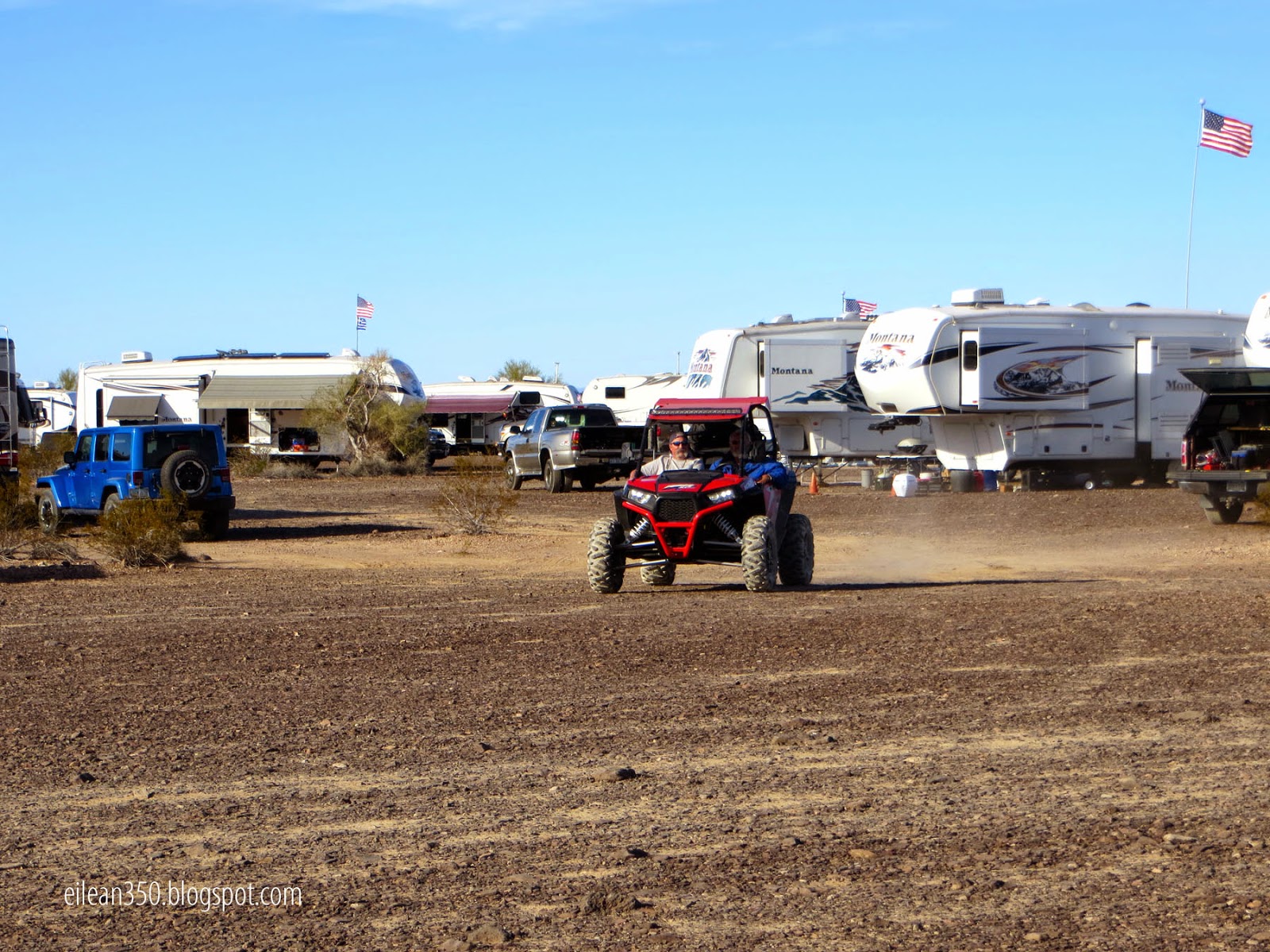 I was impressed just how smoothly it handles bumps. 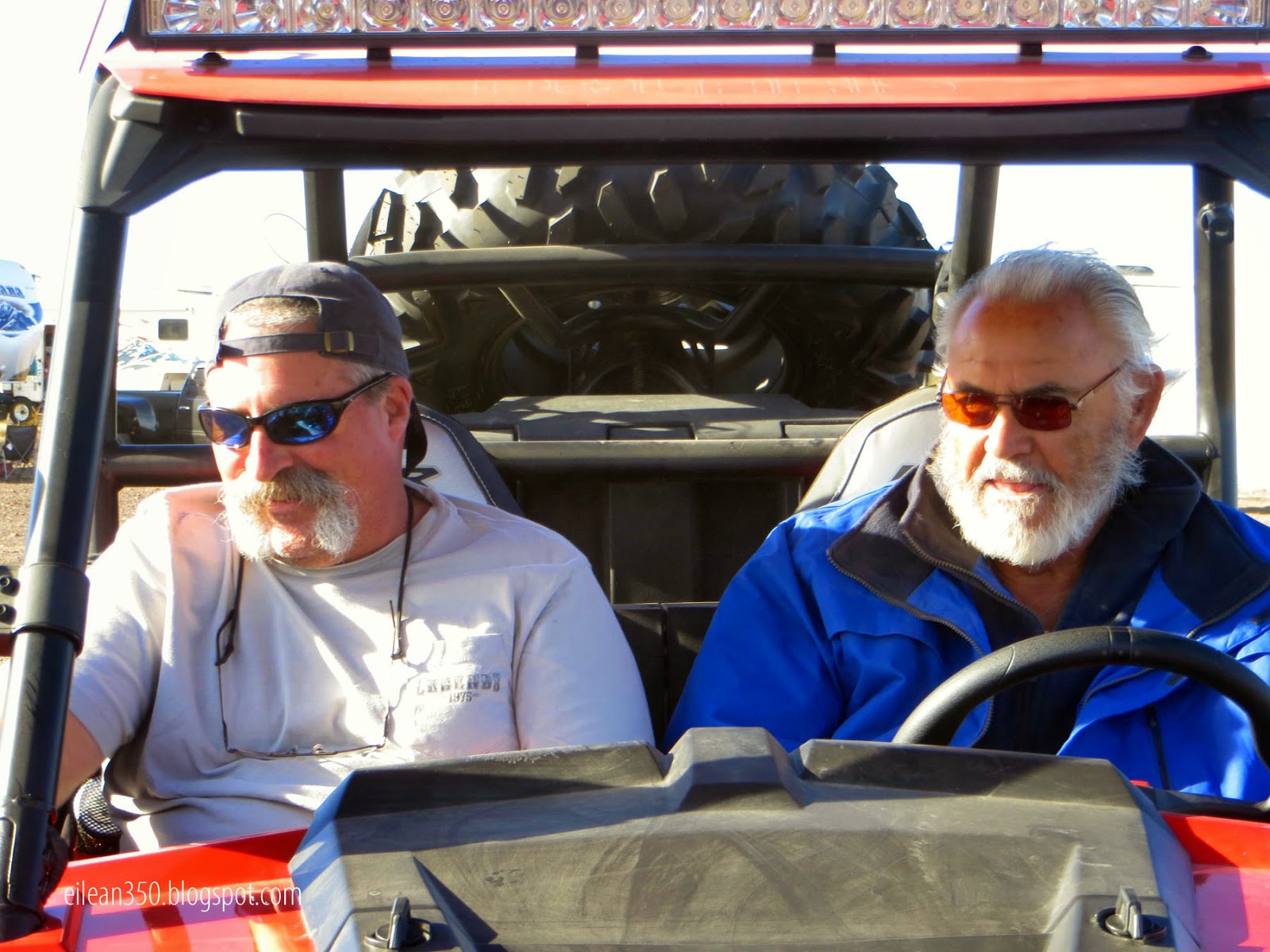