We awoke this morning to a strong northerly wind that had picked up
early in the morning after the passage of a strong cold front.

The RV was shaking and the temp and humidity had dropped from
the high levels where it had been.

We started to pack up camp in anticipation of a 10am departure for our
next stop on the eastern migration.

One item of early morning interest was the condition of the campsite next to us
occupied by folks who had arrived yesterday and set up a pretty large assortment
of "stuff"..  all sorts of ornaments, tents, lights, flamingos...  etc.

With the winds gusting over 30 I fully expected to see most of their stuff gone,
scattered to the winds. 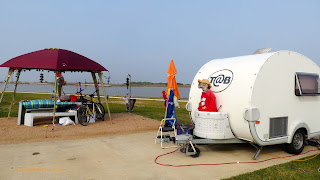 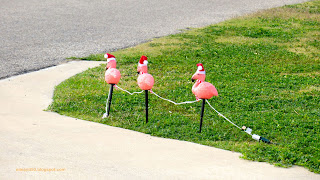 Fortunately for them - most of their stuff remained although some was blown down.

We got our camp packed up and by 1030 were leaving the park.

Carolyn & Wayne got this shot of us leaving the park. 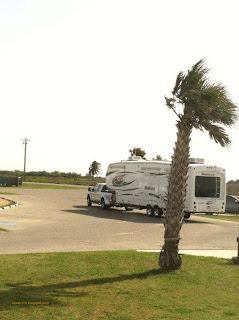 You can see the palm tree straining against the wind.

Our new location is in Extreme eastern Texas close to the La border.
Really out in the Boonies of east Texas.

We are at an Army Corp of Engineers (ACOE) Park, on the shore
of BA Steinhagen Lake about 11 miles west of Jasper, Tx.

Like all of the other ACOE parks we've visited, the sites are large
and quite suitable for large rigs. 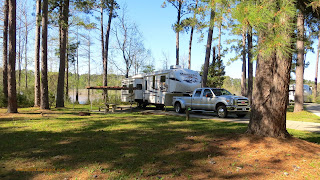 We are tucked back in the trees. 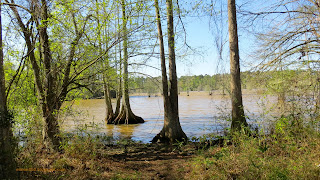 There was a warning at the entry station about Alligators...  Huh?

We're a far way from our recent haunts in the desert that's for sure. 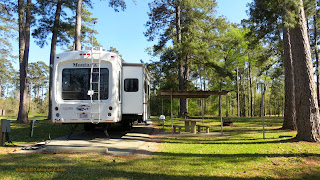 Inside the RV - as soon as we stopped Kate pulled out a book
and Gracie found a Lap. 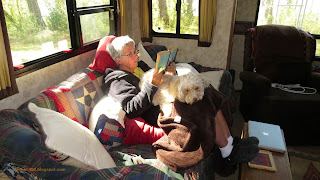 Our plan is to spend tonight and tomorrow here and then on Tuesday
continue to push east with our next stop just outside of New Orleans.