Our next stop was the Travelers RV park in San Antonio.
It was located only a few miles from downtown and was highly rated
so we gave it a shot and were pleasantly surprised.

For an RV Park - it was decent...
Not as nice as the one last night but still ok for a night. 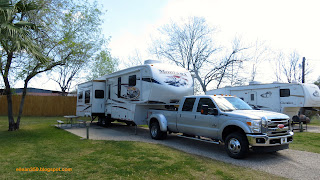 Again - we got the very last site in the place!

Upon our arrival at 1pm we hit the ground running as I had a full
day planned and little time to see the sites.

Rather than driving the dually into the city and trying to find a place to
park - there was a bus line right across the street from the RV park.

The bus cost only $1.20 each for one way - a thrifty choice
that dropped us off 3 blocks from our first stop... 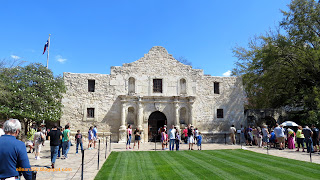 The place was PACKED!
I think that everyone in Texas heard that we were going to be here... 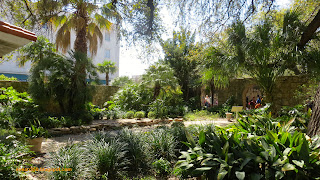 Inside the walls of the old mission are now gardens 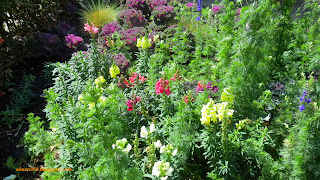 Even thought its interesting - I wont go into the history of the Alamo...
Google it if you want to know more. 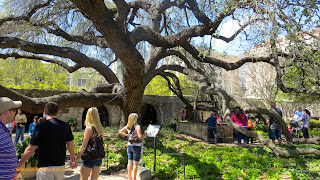 The Alamo consisted of several buildings surrounded by a number of walls
During the battle as one wall was breached the defenders would fall back.

The wall below - the long barracks - was the last wall breached before the
remaining defenders took refuge in the Chapel and made their final stand. 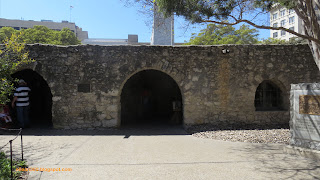 The line to see the inside of the Chapel was at least 2 blocks long so
we couldn't spare the time as we had places to go... 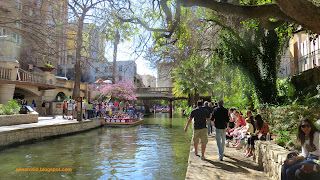 The Riverwalk is probably one of the finest examples of Urban Planning
one will find in this country. 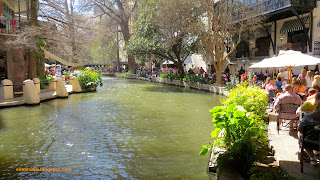 An urban interface where city meets nature.
Where you can stroll, enjoy the cool breezes, shade,
have a bite to eat and people watch.

Kate & I stopped for lunch and a couple of cold beers at one of the
numerous restaurants along the water. 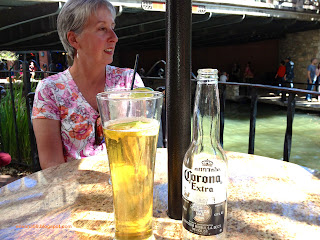 We had to wait a while for our food - we were content and didn't think
it was excessively long even though they kept apologizing and we kept
telling them not to worry about it... we were enjoying the view.

After lunch the owner came out - apoligized again and told
us that lunch today was on him! 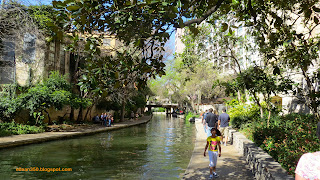 The winds for several miles thru downtown San Antonio.
We met these two along the way. 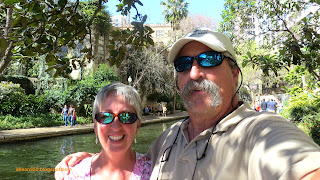 While some spots are full of restaurants and pubs - others are quiet and peaceful. 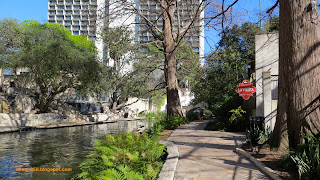 Further along we came to an amphitheater on the bank of the river. 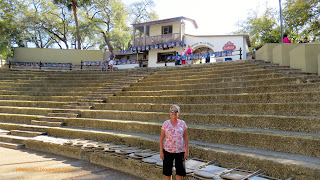 Across the river was the stage - they were getting ready for an evening concert. 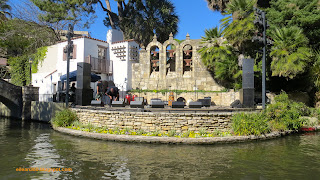 Having made the Riverwalk loop - we again jumped on the #42 bus - this
time southbound and by 6pm were back at the camper in time to feed the doodles and
take them for a long walk.

We put a few miles on our feet.

Then there was this morning....

Before we departed I wanted to visit the Mission San Jose
which is only a few miles from the RV Park,
plus we needed to do some food shopping....  and we
needed to be out of the park by 11am checkout.

The mission opens at 9am.  Whole Foods opens at 8am.

So...  at 0730 we were on the road to Whole Foods,
we arrived there 5 minutes after they opened...
did some speed shopping and then hit the road to Mission San Juan.

We were at the visitor center 5 minutes after 9! 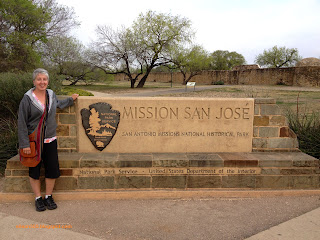 The Spanish missions were more than just a church.
They were entire cities unto themselves with all the necessary technology
to sustain themselves.

The mission was formed in 1720 and at times as many as 300 people called
it home.

This picture is shot from inside the walls.  As you can see the inner courtyard
was over 5 acres in size. 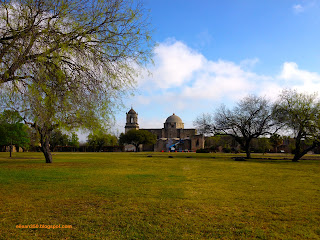 Along the walls on 3 sides were individual living quarters. 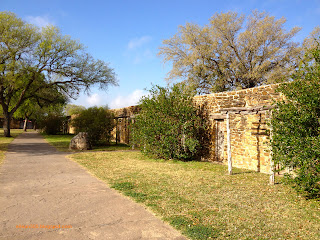 Kate in one of the rooms along the wall. 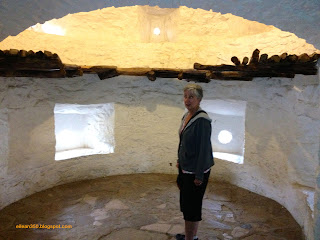 A side doorway to the Chapel.
It had a real European Feel to it. 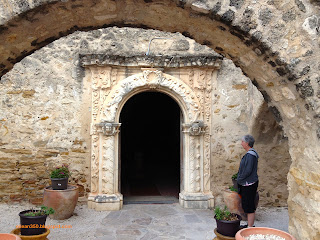 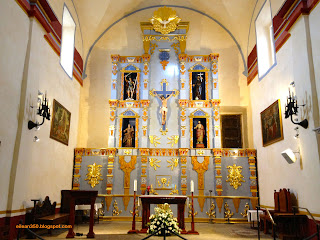 Kate lit some candles and said some prayers for the departed...
I finally had to douse her with a bucket of water to get her out of there.

Just outside the walls was a running stream (it's all about placement when locating
the mission).  The stream supplied water plus power for the Grist Mill. 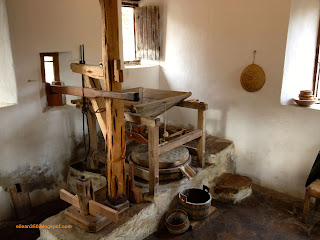 While we were there they were grinding flour on one of the few surviving
vertical grist mills in the world.

Soon our visit had to end and we had to fly back to the camper and hit the road.

This concluded our brief but busy visit to San Antonio.
We need to come back here with more time to spend but for about
6 hrs of actual feet on the ground touring time - we squeezed a heck
of a lot in.

We hitched up and drove 4 more hours east and now are sitting
in the Matagorda Bay Nature Park in Matagorda Texas
on the Gulf of Mexico.

The back of the camper is about 50' from salt water and its warm and humid.

Quite a shock from where we were just 72 hrs ago.