Today was a tale of two cities.
I debated posting on both events since they are so diametrically opposed,
but that was the way the day went so hopefully I can make the transition.

After the passage of a strong cold front last night, the morning dawned clear
and cold with a strong breeze off of the lake shaking the bus.

I was up at 5am working on budgets - its that time of year - and by
10am I had made great progress and checked off a number of milestones.

Our hosts Dave & Linda picked us up at 1030 and we were off to our days destination:
The Salt Lick Barbecue in Driftwood Texas.

Well known to locals and visitors alike - it had been on my radar since reading about
it on my friend Bobbys' Blog a couple of years ago.

Set out in the country in a Vineyard like setting it contains a large amount of indoor
and outdoor seating.

Stepping out of the truck our nostrils were immediately greeting with the sweet
scent of meat being artfully smoked. 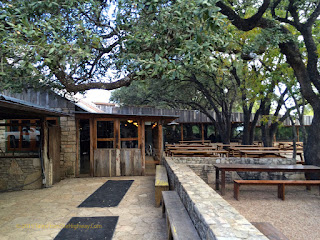 Stepping inside I followed my pork sensor to the barbecue pit where
Chicken, Pork, Beef, and Sausage were being cooked over an open pit
wood fire. 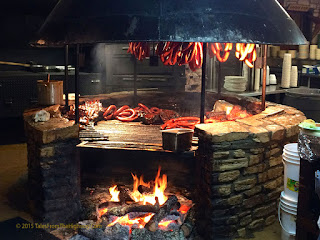 The SL is BYOB so our tour guide had brought a cooler filled with Lone Star
and Shiner Bock Beers.   Perfect accompaniment to the feast to be delivered.

Kate opted for a plate of Sausage, Chicken, Slaw, Potato Salad and Beans. 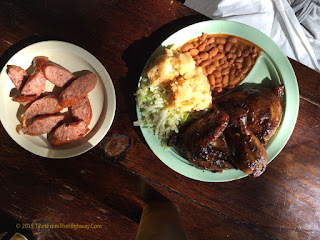 I - and most of us went for the combo Pork Rib and Brisket (burnt ends of course) plate,
with a side of beef ribs. 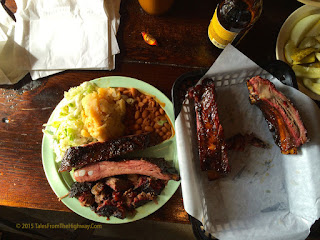 We were joined by Dave & Lindas'  daughter Jamie for the day who also assisted
as tour guide and took us on short cuts on the back country roads thru the Texas Hill Country. 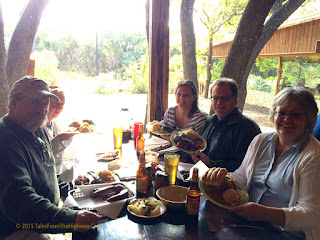 After a succulent meal (many leftovers taken for dinner tonight) what better way
to cap things off than with some peach/berrie cobbler with Vanilla ice cream? 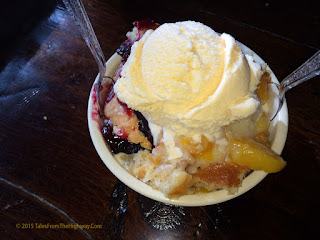 Our tour guide Jamie also knows the manager here and he comped us all the deserts.
He insisted that we try their signature Pecan Pie as well.
I was not disappointed. 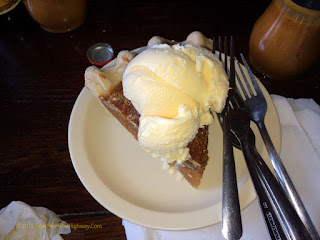 After a fantastic lunch - one that will be remembered - it was off to visit the local
town of Wimberly, Tx - an artsy enclave in the hill country.

Wimberly was the site of a devastating flood on Memorial Day Weekend 2015.

Throughout the month of May, persistent heavy rain had saturated the soils throughout
the Blanco River Basin.   Any new rains would immediately run off into streams and rivers.

On the afternoon of Saturday May 23 into the late evening, 6"-8" of rain fell
over the Blanco River Watershed with local amounts of over 13".

All of this rain ran down the hillsides, into the streams, down stream into the Blanco River.

At 9pm on Saturday, the normally placid Blanco River was running at 5 feet.

The river was now carrying over 2.5 times the amount of water that normally
goes over Niagara Falls.

12 people lost their lives in the flooding that night including 8 who were in a home that
was ripped off its foundations and floated down the river until it hit a bridge and was torn apart
by the raging waters.

Driving along the river it looks as if the area has been hit by a hurricane or tornado. 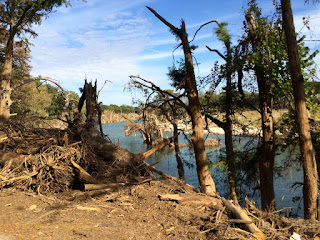 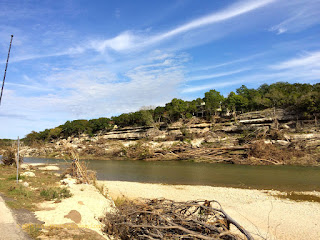 Across the river in the center of the photo you can see some white pilings standing above
the white rocks.   That is all that is left of the home that was torn away with 9 people in it.

One of the people in the house called her sister to let her know the house was floating
down the river and asked her to pray for them.

All but one of them died, including the person who called her sister. 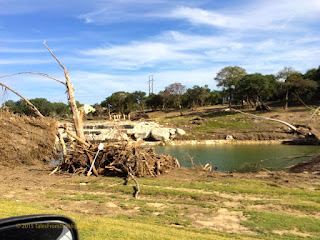 It was a somber drive, and a testament once again to how quickly life can turn.
One moment you are enjoying a Saturday evening with friends...
1/2 an hour later you are spending your last moments on earth.

Life is short and its precious.
Make the most of it and don't waste a drop.

To end on a less depressing note:

Kate was riding her bike yesterday in the campground and found this
Tarantula walking across the road. 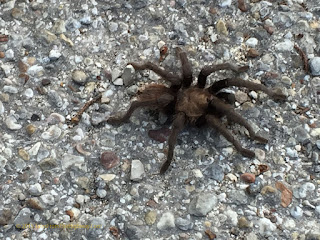 It raises the age old question...
Why did the Tarantula cross the road?

We were also warned by Dave that when we open the lid of the dumpster
to be prepared...   we might find a Raccoon inside.

Today we found one.

It was good that Dave had prepared us ahead of time.

So that was our day.

A tale of two cities.