Well the Great Barbecue Taste-off has come to an end.
In the last couple of weeks we have visited 4 superb smokehouses and
enjoyed some excellent smoked meats, but its time to give my
BBQ Sniffer a rest.

Our BBQ stops were: 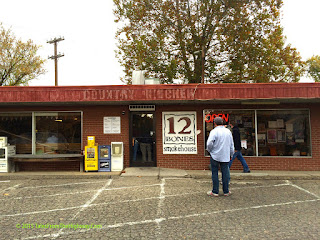 The Salt Lick in Driftwood, Tx 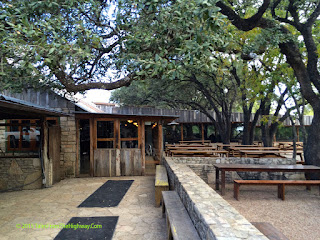 And Last but certainly not least.... 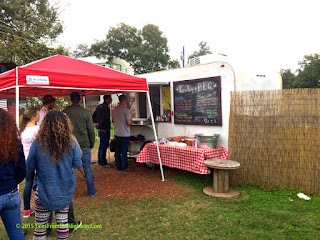 All that said - its still delicious and if you find your self in Asheville, and like good
barbecue, then you can't go wrong with 12 Bones.

12 bones has 2 locations and we find the location in town much
better than the South location.  Plenty of seating inside and outside.
They close at 4pm so don't delay. 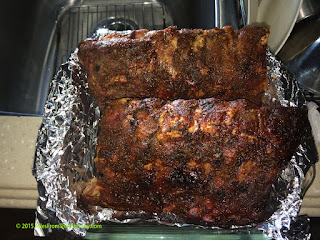 Our next stop was Big Daddys Roadhouse in Lavon, Tx about 30 mi
north of Dallas.  Located near the filming location for the TV show Dallas, it
was frequented by the cast and others and the walls are adorned with autographed
photos of many celebrities.

The Brisket and the Pork ribs were all well smoked, but lighter than 12 Bones and
the barbecue sauce served on the side was more to our liking than the heavy
vinegar served at 12 bones. 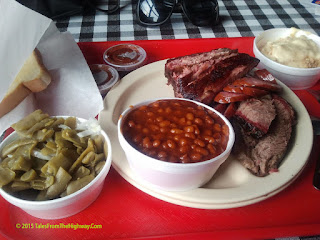 Next on the tour was the Salt Lick in Driftwood.
Rated on Ambiance alone this place would be a 10.
Set in a scenic location there is a lot of indoor and outdoor seating under the Oaks.
A byob establishment - folks bring coolers of their favorite beverages and
make an afternoon out of it.

The meats were lightly smoked, tender and juicy.   Cooked over and open pit
wood fire, it is less smoked than the others.

The Burnt ends Brisket was delicious.   Sweet caramelized bark that burst with flavor.
The ribs were tender and juicy.
There were two sauces - a mild and a spicy.   The spicy was still tame.
The sauces added a nice flavor and I enjoyed them but I've had better.
The sauce however is very personal taste. 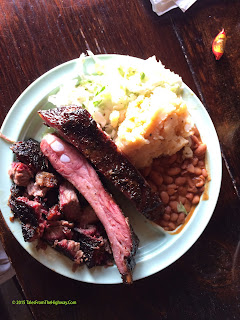 Last on the stop was Kerlin BBQ in Austin.
Served from a food trailer - like many outlets in Austin.
This is a mom and pop operation.
The write-ups on it have been stellar and even though I arrived
1 min after opening time, the line had already formed.
This place has been discovered.

Now the photos below do not do this food justice.
Thank goodness I do not make my living as a food photographer as my clients
would be ghost towns.

The brisket was mouth watering, tender,  juicy,
and sported a light bark with a pronounced smoke ring.

It was so tender that you would pick up a piece and it would fall apart.
It seemed to be just the right mix of smoke flavor. 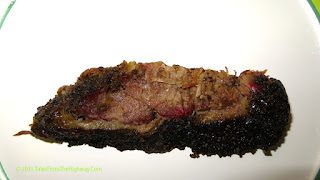 The pork ribs were juicy and fall off the bone tender.
The sauce was a light tomato vinegar base with some celery seed that gave it a nice twist.

We ordered this food for take out and ate it for dinner. 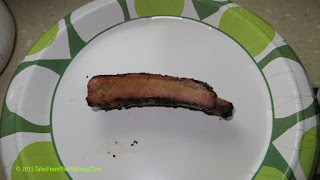 It is not much on ambiance.  There are picnic tables under tent canopy
with some rock and roll music playing.
Austin is a college town and many of the patrons looked like they were students.

One thing that I particularly liked about Kerlins
(besides the name)
was the sides:

A blue cheese Cole Slaw.   Wow.   A great twist on a BBQ favorite.
And Jalepeno Dill Potato Salad.   Wow again.  Twas light on the jalapeño and not spicy,
but the flavor of the jalapeño just added a unique twist.

Well done on both!

Its been said (by moi) that man does not live by BBQ alone and
these sides make that possible. 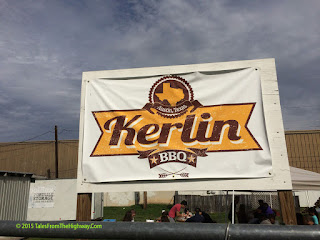 The only way to truly judge these places would be to sit down and eat it side by side.
Doing it weeks and miles apart makes it difficult to fairly compare.

If you are ever near any of these places...  stop in and give them a try.

Its a tough job but someone has to do it.