No visit to the Texas Hill Country is complete without a visit to the LBJ Ranch.
Known at the time as the Western White House, during our visit there we gained
some key insights into our 36th President and we both left with
a greater understanding - and admiration for the man, and his accomplishments.

Born in 1908, LBJ was raised very close to the ranch where he lived his whole life.
His mother was one of the few woman at the time who was a college graduate and instilled
a love of learning into her son.   By the age of 4 he had learned to read and was
admitted early to the local one room school house were he obtained his early education.

The one room school house where the future president first went to school. 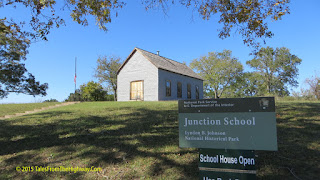 LBJ, whose own path out of poverty was via a public education,
strongly believed that education was a cure for ignorance and the poverty it bred,
and was a critical component of the American Dream.

This belief led to the landmark Education Act of 1965 where for the first time,
significant amounts of federal money went to poor school districts in an attempt
to ensure that all children of all income classes would receive an equal education.

This landmark bill was signed out side of this one room school house and the
president signed it sitting next to his elementary school teacher.

Below is the classroom where LBJ first went to school. 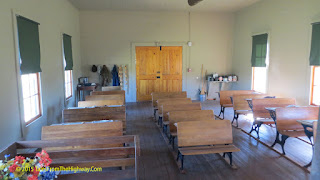 Growing up in a poor area, LBJ saw the positive things that government could do for
the people via FDR's New Deal Programs during the depression.

It was these observations that help shaped his resolve to use the power of government
as a tool to help people as he rose to power.

To obtain his goals, LBJ was the consummate deal maker.
He learned the strengths, weaknesses, wants and needs of foe and allies alike,
and used this information to further his legislation.

During his presidency which lasted about 1,900 days, he signed over 1,000 bills into law.
Almost 1 bill every other day!
This is a record pace of achieving not seen before or since.

Equal rights,  segregation, Medicaid and Medicare, voting rights,
broadcasting reforms, national endowments for the arts and humanities,
his legislative agenda touched all walks and facets of our society.

We stopped for this shot at the entrance to the ranch. 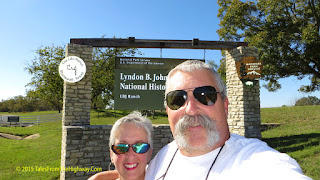 Driving the road into the ranch you are under a canopy of Live Oaks, and
come upon the Johnson Family Cemetery.
LBJ on right and Lady Bird, on the Left. 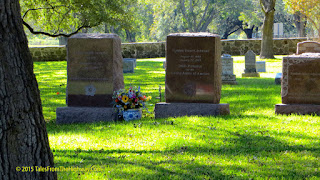 The ranch and its extensive collections were donated by the President and Mrs Johnson
to the National Park Service.

Across from the family cemetery is the boy hood home that LBJ grew up in. 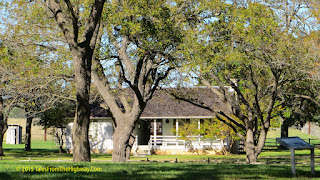 This is the small jet that LBJ would use for local transportation.
The regular Air Force One - a Boeing 707 - was too heavy to use the LBJ Ranch Runway. 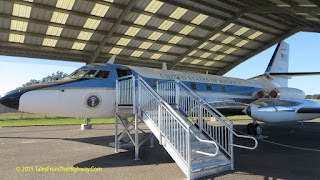 This small house - about 200' from the main house - served at the secret service
command post. 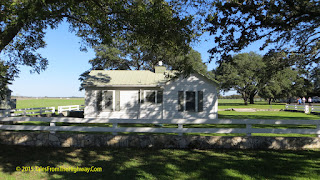 The side of the main house.   LBJ's private office was on the extreme left of this photo.
The large Oak on the right is called "The Cabinet Oak" and is so named due to the
numerous meetings that would take place in the shade of its expansive canopy.
It is currently estimated to be about 350 years old. 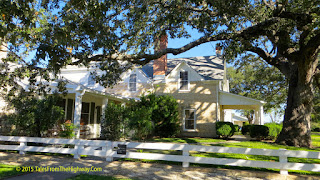 This is a photo of the front of the home.
Behind us is the Pedernales River.
The home was set overlooking the river. 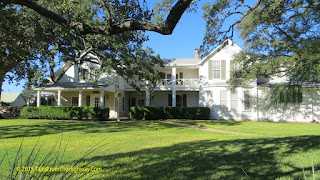 No photos were allowed to be taken inside the home so I do not have any to show.

Some interesting tidbits...  LBJ was an information junkie.   There were 3 TV sets in
every room (only 3 stations were available locally)

There were phones in every room - many rooms had 2 or 3 phones.
Lady Bird had a separate bedroom.
While she would sleep with the president,
often she would be woken up by staff in the room that LBJ had summoned and was having
a meeting from his bed.  Knowing it would probably go on for hours,
she would simply get up and retreat to the other room for the rest of the night.

LBJ had a 3 pack a day cigarette habit.
After several heart attacks he quit smoking for 15 years.

On the day of Richard Nixons Inauguration, as the door closed on
Air Force One to take him home to Texas for the final time, he lit up a cigarette.
His daughters, yelled about his piking up a cigarette to which he replied that
he had raised his daughters, served his country, and now it was his time.

LBJ only lived about 4 more years.
During those years its been said that we was committing slow motion suicide by
too much smoke, drink and food.   He had several more heart episodes.

Aides said that Johnson had become depressed that after a lifetime of public
service, and thousands of bills intended to uplift and help people,
that the only thing people remembered about him was that he
was the president who deepened our involvement in Viet Nam.

The war in Viet Nam wore on the president, and endless hours of taped
conversations about the war showed how desperately he wanted to end the
war but felt the US was trapped in a no-win situation.

As much as he tried - it seemed that peace eluded him.

Ironically he died on his beloved ranch at almost the same instant that
Richard Nixon was announcing the peace agreement that ended the US involvement in that war.