After saying goodbye to everyone we spent one last quiet night in Tubac, Az
Our night was punctuated by the light pitter patter of rain on the roof.
One last time we got to sleep with the windows open while enjoying
that unique sent of a freshly moistened desert floor.

Friday morning we were on the road.
We took some two-lane highways for the first hour or so.
It's always so much more scenic on the little roads, but the driving
is also a bit more heads-up.

7 hours & 470 miles later we settled into a KOA in Van Horn, Texas.
Van Horn is a dusty little town in the West Texas mountains about 140 miles east of El Paso.
This was a convenient find for future reference as I am often looking for somewhere to
crash in west texas and the places are few and far in-between out there. 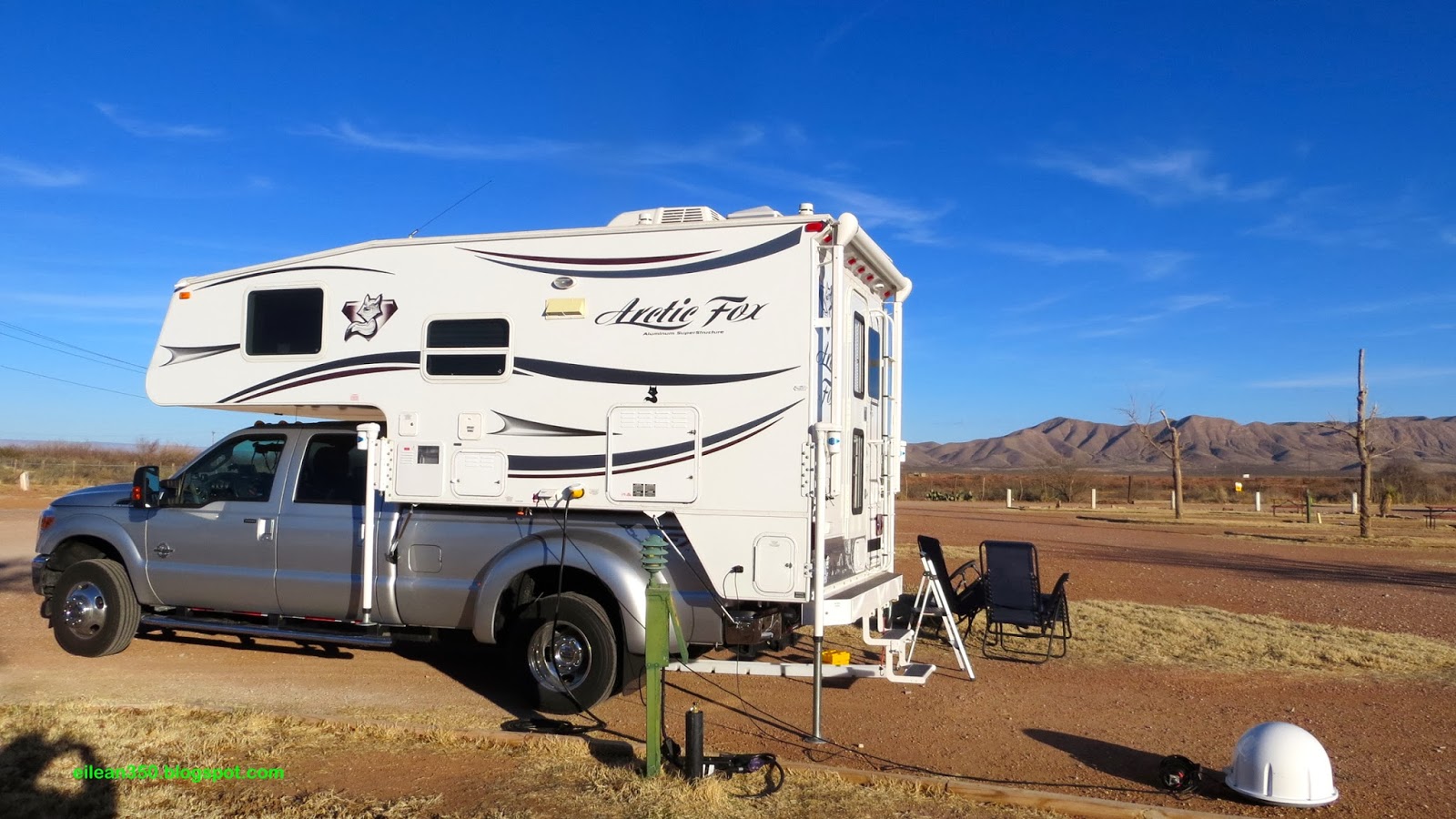 The KOA had a little Cafe so we decided to try our luck rather than cook dinner.
Kate had a Salisbury Steak
and I had a German Seasoned Baked Chicken Quarter.
Both were served with Corn, Mashed Potato's, Gravy and Texas Toast.
It was tasty inexpensive and hit the mark.

Saturday morning dawned Clear and Cold.  The temp just above freezing.
I enjoyed the rare luxury of sleeping in till 7am.  That was a treat.
By 9am we were fueled up - our first fuel since Yuma - and on the road.

About 2 miles west of Ft Stockton on the South side of I-10
there are several statues - actually silhouettes of Indians on horseback. 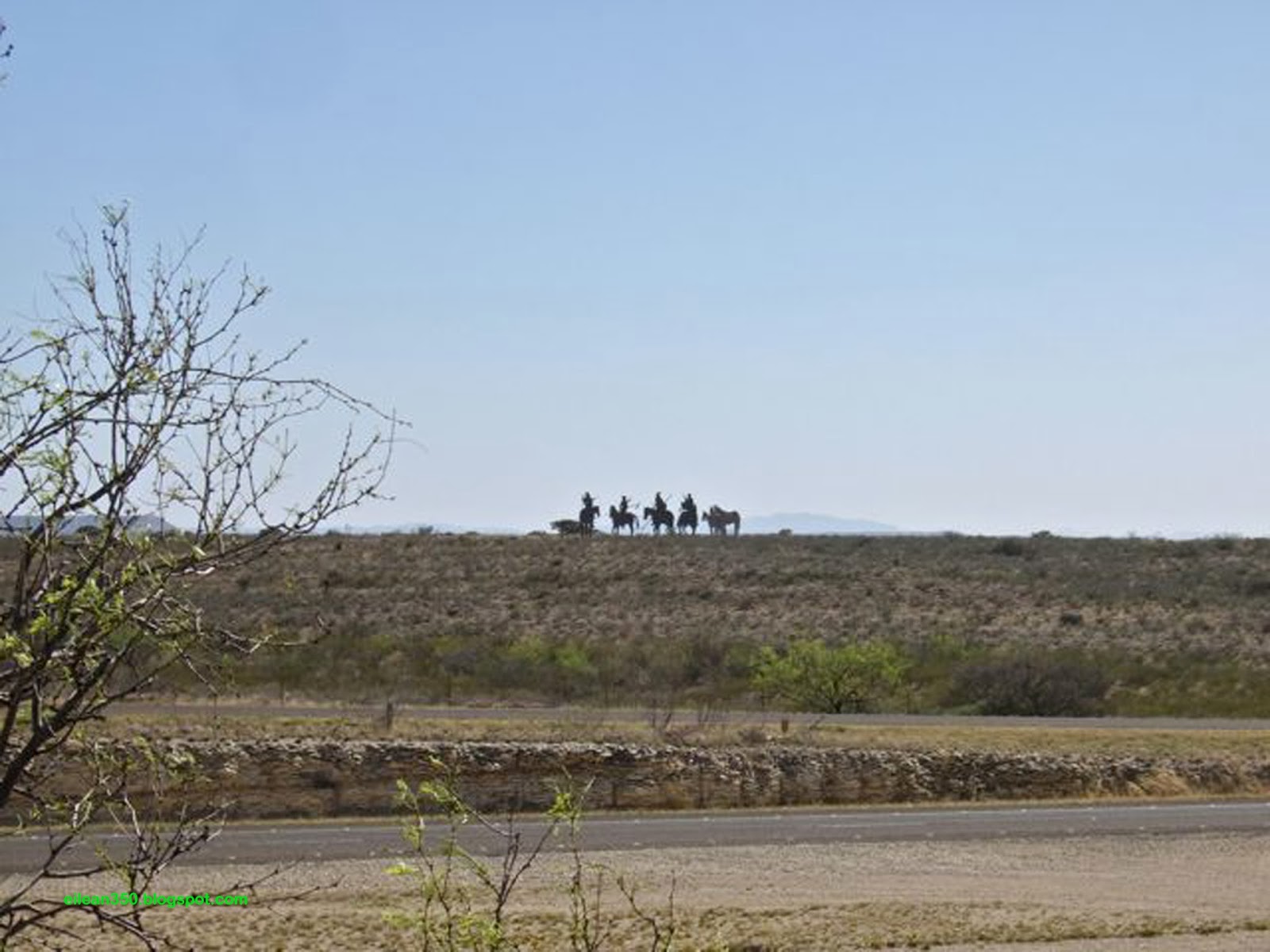 This is called "Look to the East"  it represents a Comanche hunting party as they pause
in their search for some of the fast dwindling Buffalo in the Area.
Their leader has warned them to be alert for danger and to look to the east.
(the soldiers would come from the east) 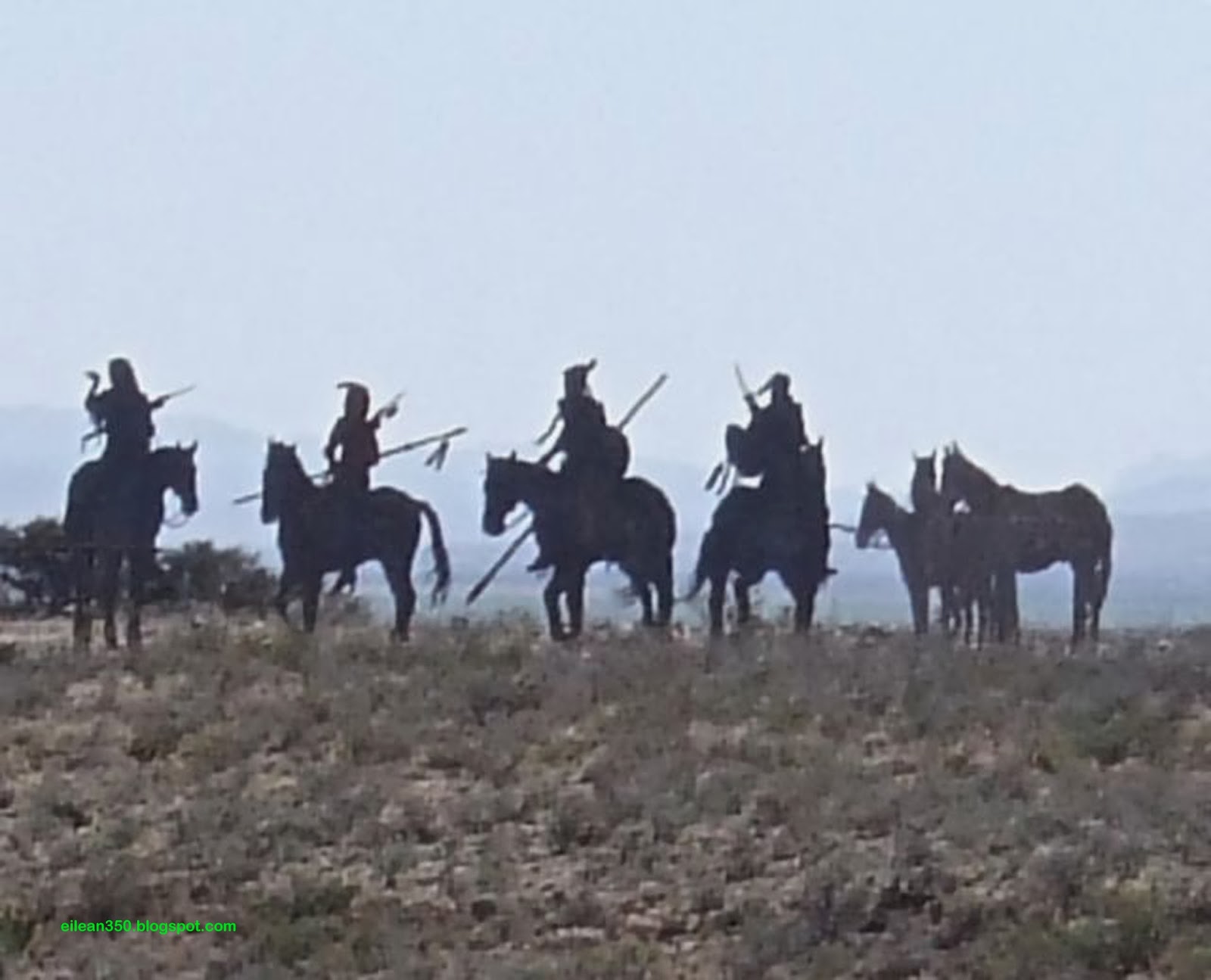 On the east side of Ft. Stockton are more silhouettes - of mounted Calvary.
I'll try to catch that for you next time.

We stopped for some provisions at the Walmart in Fort Stockton.
and by 4:30 we had peeled off another 470 miles,
crossed the halfway thru Texas mark,
and were resting at the Buckhorn Lake RV Resort in Kerrville Tx. 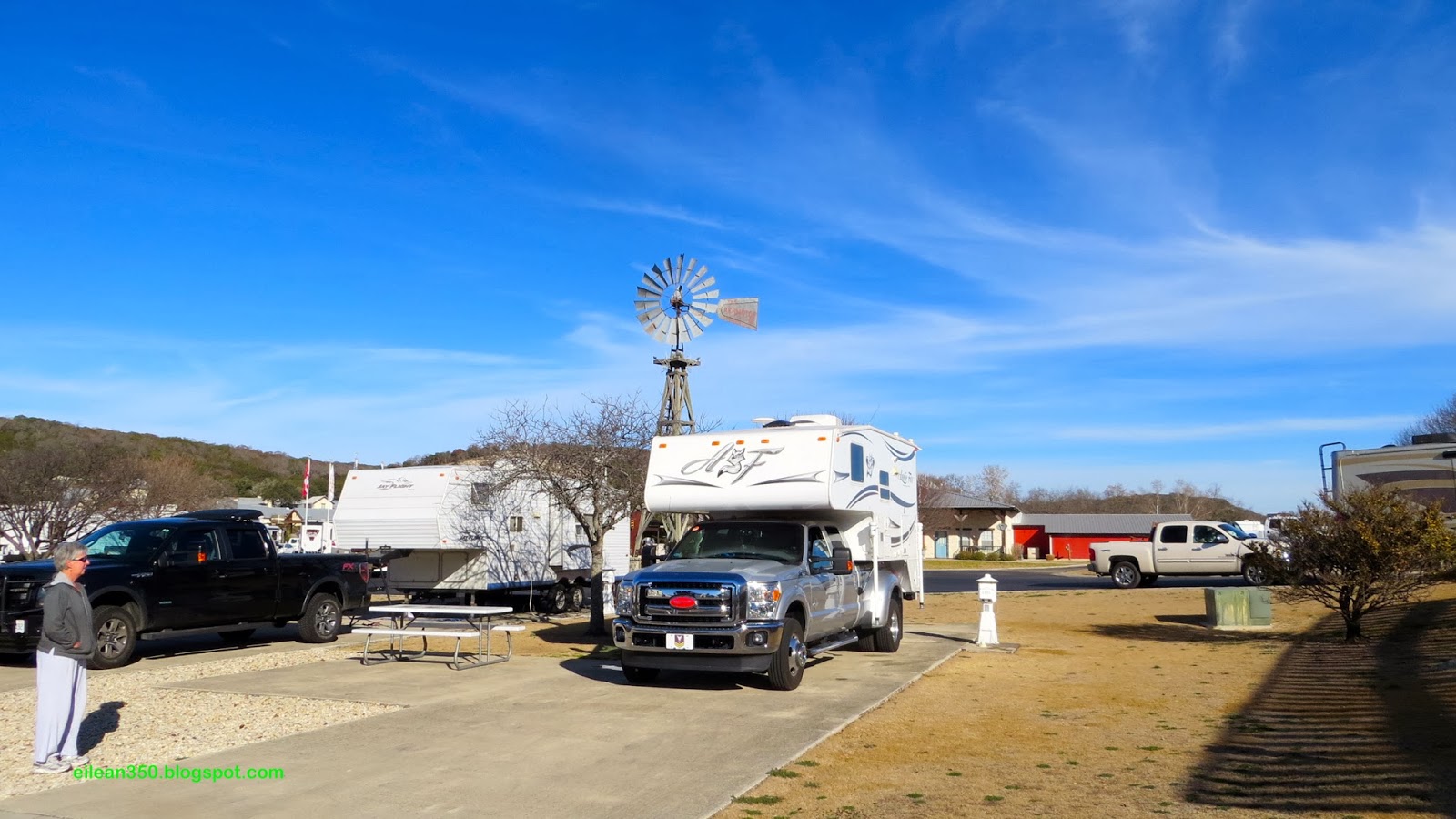 An interesting part of this section of I-10 is that about 50 miles East of Ft Stockton
you start to leave the dry sagebrush desert and start to see the beginning of Trees and greenery.
Just a little bit at first but within a 100 mile or so stretch of roadway
you are back into a more eastern looking landscape and have left the west behind.

The Buckhorn Lake Resort looked like an interesting place.
They have live entertainment and dinner shows along with all the other
usual RV Resort amenities.
Our night they were having a spaghetti dinner and guitar jam session.

After getting set up we took the Wolly Beasts for a good long walk around
the resort.  There was lakes, streams, bridges, pools and hot tubs to name a few.
The showers were some of the nicest as well.
Overall an enjoyable place to relax for the night.

Sunday morning we departed even later.
It was almost 10am before we were on the road.
On the way we stopped at Target on the northern San Antonio bypass. 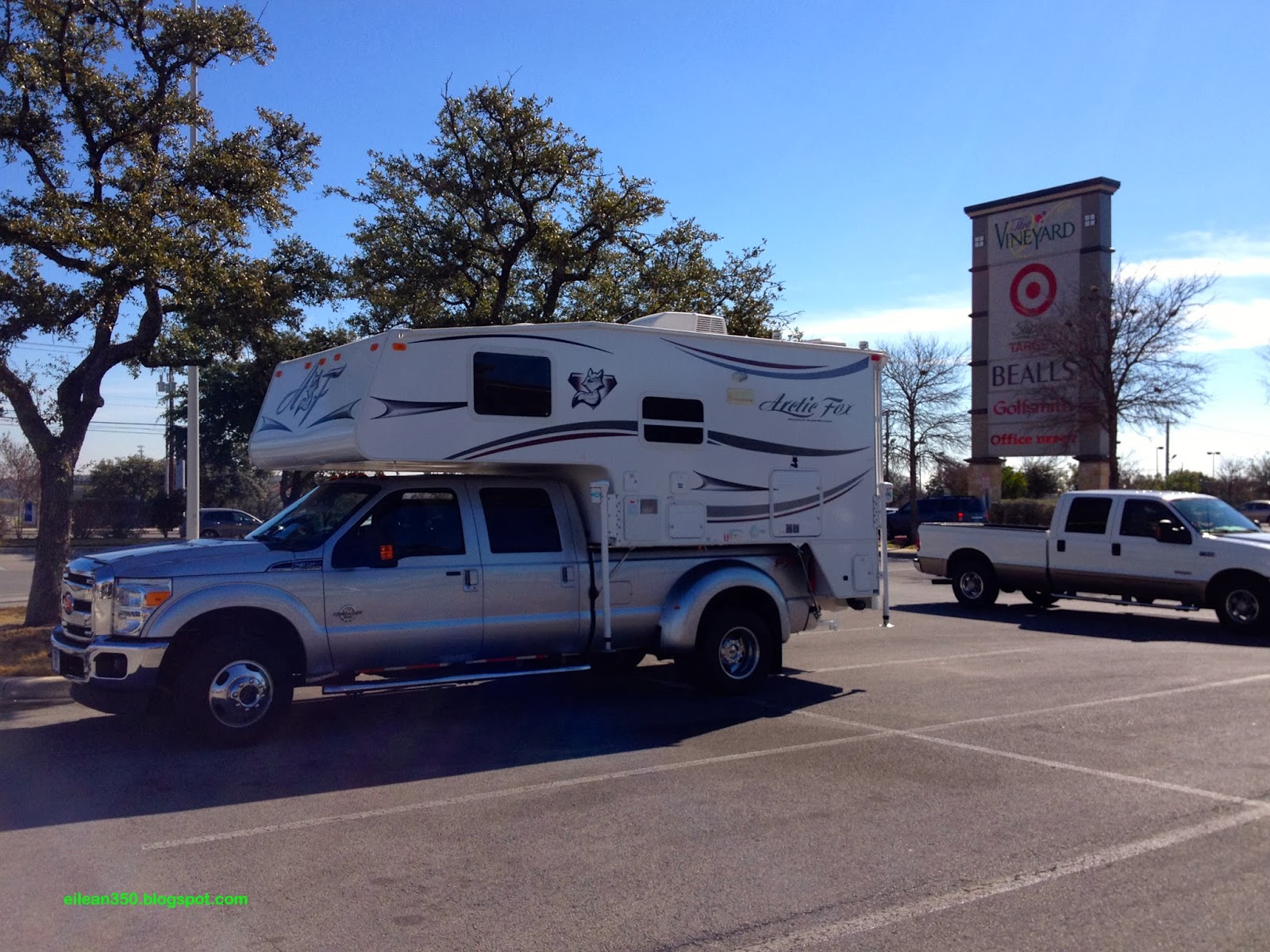 Our mission at Target was to get some bars of
Dr Bronners soap and then continue east.
Our goal for the day was to simply get
thru Houston on the weekend.

By 5pm we had arrived at Hidden Lake RV Resort in Beaumont, Tx.
We now have only 40 miles left and we will once again have crossed the Lone Star.

Calling this place a resort is taking great liberty with the english language.
It is no where near what one would call a resort - but it is certainly nice for
an overnight stop and with my passport america the site was only $17.
It is only 1/4 south of I-10 but there is no road noise which is nice.

After settling in we enjoyed a nice meal of Roast Turkey,
Stuffing, Gravy and Green Peas.

Last December while Kate was in Chicago I stuffed and roasted a small
Honeymoon Turkey, made gravy and then made two meals out of it.
Then I vacuum packed and froze both meals, one for
Christmas and one for New Years.

We ate the Christmas meal…
I don't recall what we did for New Years Eve…
Must have been good.

In the morning we were greeted with heavy pea soup fog.
Welcome back to the coast :-)

I let Kate sleep in a bit while I got a start on my Monday morning work
and let the fog burn off a bit.
By 8am it got a bit better as you can see below. 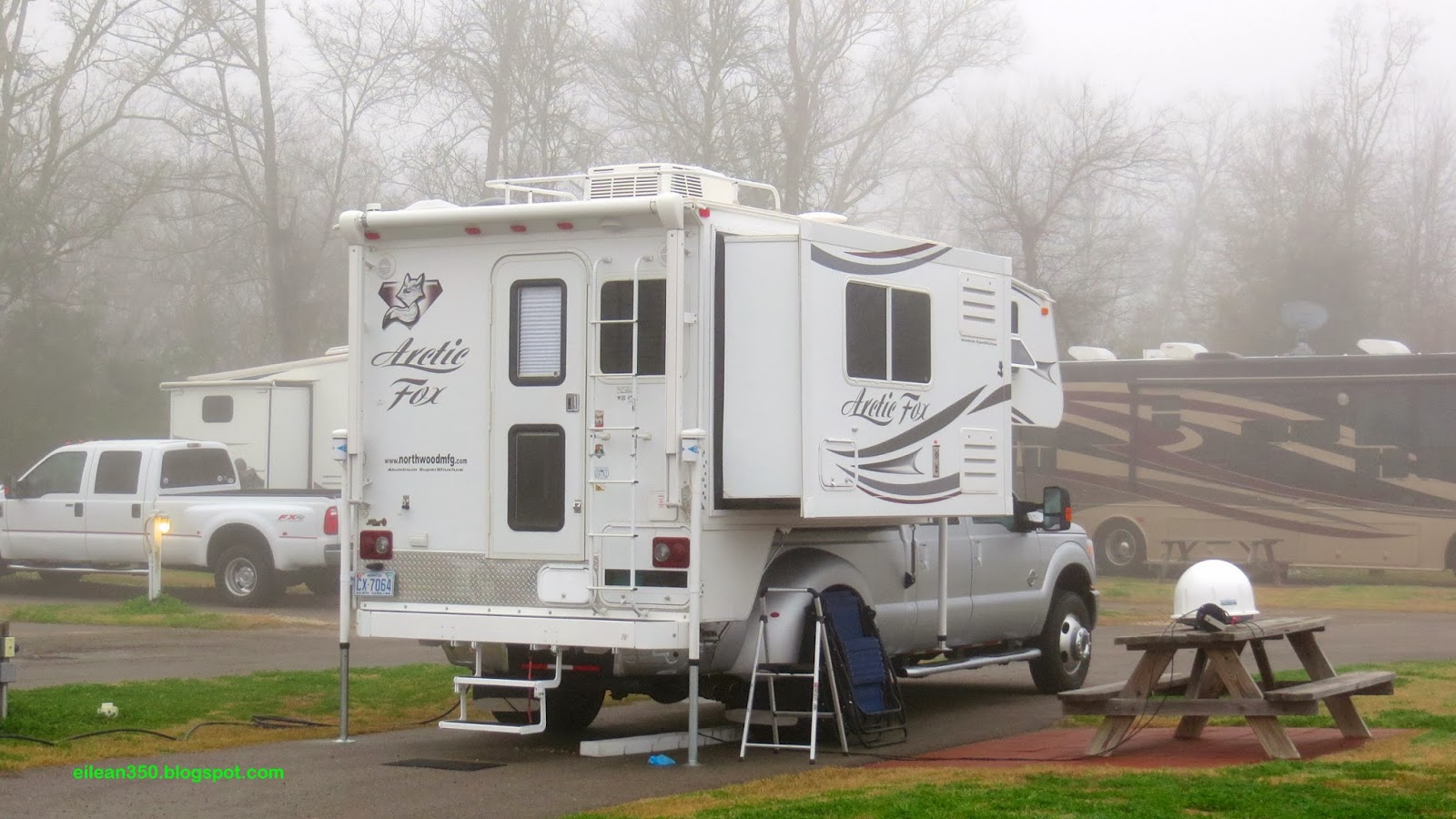 By 930 we were back on the road.
Todays weather was alternating fog, rain, & clear.
By 2pm we were sitting at Cafe du Monde in Mandeville, La
enjoying a French Roast Coffee and some Beignets.

On the way to the Campground we stopped at our favorite meat market in
this area and picked up a package of fresh pork Boudin for dinner.

We are now at Fountainbleu State Park on the north shore of Lake Pontchartrain.
Tomorrow will be a down day - no travel planned.
A chance for me to work during the day and take the night off.
The forecast is for rain and currently it is raining on and off.
Only a hundred miles or so north it is snow and ice so rain is ok I guess.
The temps are in the high 40's.
I miss the warm air already. 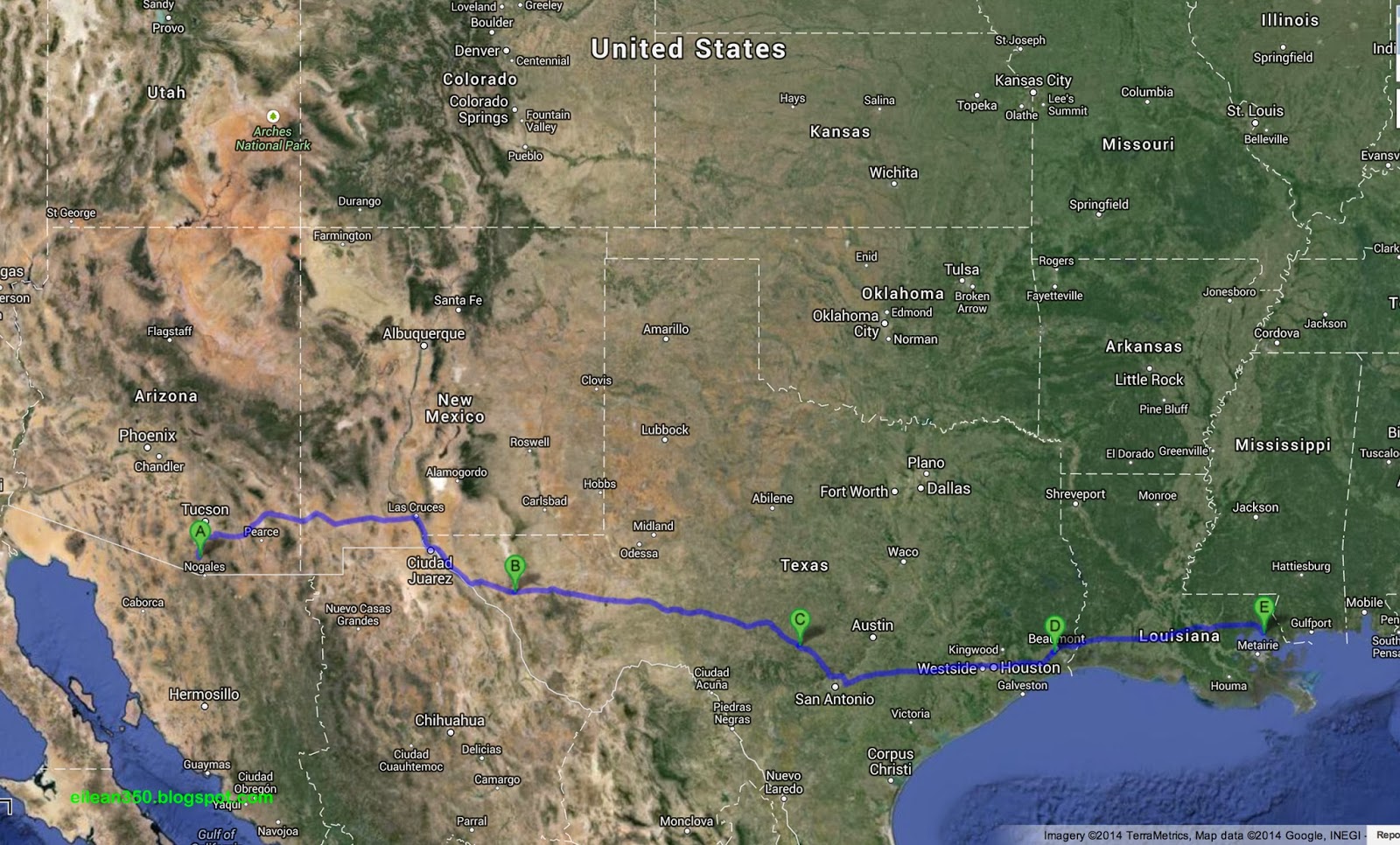