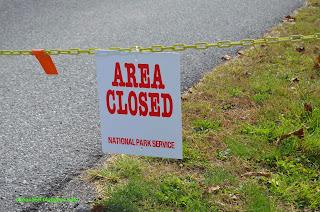 On July 1, 1863 almost 200,000 men of the Union Army and the
Army of Northern Virginia met on the fields of Gettsyburg Pa
in an epic battle that would assure the outcome of the Civil War.

The Battle lasted over 3 days and by the time it ended almost 50,000 men on both
sides of the conflict lay dead, wounded, captured, or missing.

The losses were very similar on both sides but it was a death blow to the
Southern Army under Robert E. Lee and after Gettysburg they were never
able to mount an effective campaign again.

As a civil war and Gettysburg history nut, this visit was a real treat for me.
It was also on Kates bucket list and even though the government shutdown had all
of the federal property closed, we still managed to do some clandestine
infiltrations and see the high spots.

I wont try to explain the 3 days of battle, but those of you who are familiar
with it will recognize the places that follow.

Below is a photo of Little Round Top.
This was the Southern end of the Union lines and the scene of
some particularly deadly fighting. 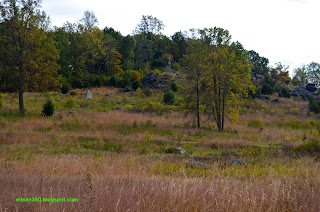 A farm just north of little round top tucked up
against Cemetery Ridge. 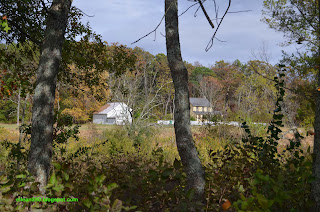 Looking back at the Round Tops from just east of
the Wheatfield. 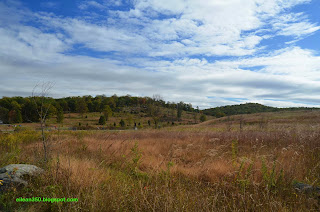 Looking east across the wheatfield.
Round Top and the union lines are off to the left. 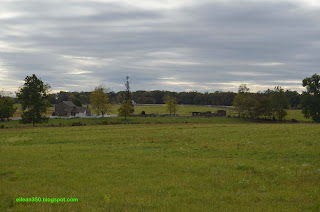 Looking west towards the Peach Orchard. 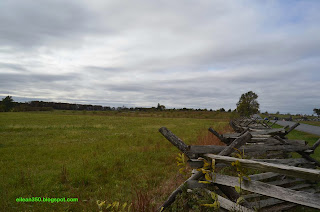 After 2 days of fighting including rebel attempts to overrun the northern and southern
ends of the Union Lines, General Lee decided on a full frontal assault of
the Union Center.   This attack became known as Picketts Charge.

On July 3rd, at 2pm after a massive artillery barrage by both sides
consisting of almost 200 cannons and lasting between 1 and 2 hours,
approx 12,500 Confederates stepped out of the woods below and
set forth across about a mile of open field towards the union lines.

In less than an hour over 50% lay dead or wounded.

The view below is looking from the Emmitsburg Road toward the rebel lines
which were located in the trees off in the distance. 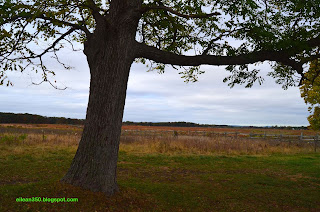 Halfway across the fields, running straight thru the middle
was the Emmitsburg Road.
The road was flanked on both sides by a wooden fence.
The attacking forces were sitting ducks while trying to climb over or dismantle them.

In the photo below the rebels attacked from the left side heading across the
road towards the union line a half mile away to the right. 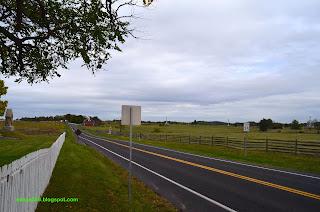 This is the view from the Emmittsburg Road looking towards the Union lines
which were just in front of the tree line in the distance. 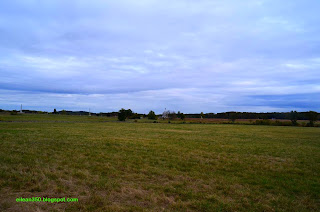 This failed attack was the last major action of the Gettysburg Battle.
On July 4th an infomal truce allowed both sides to collect their dead and wounded.
The next day the Confederate forces limped back south never
to venture north again.

Our visit here was marred by the Government shutdown and and two
days of rain here that totaled over 6".
In spite of that however we had a great time.

Today we also went to the National Apple Harvest Festival
about 10 miles north of town.

I'll try to post some pictures of that in a later blog.

Tomorrow we are headed south into the Shenandoah Valley of
Virginia to Shenandoah River State Park just north of Luray, Va.
My internet is going to be sketchy for a few days but we'll see what we can do.