The Fortress of Louisbourg

The Fortress of Louisbourg is one of those places that we will remember as we
move ahead and travel onward..

In the mid 1700's England and France were engaged
in a struggle for control of North America.

The 13 Colonies of the United States were firmly in British Control, but north of the colonies,
what would eventually become  Canada was a region of mixed British and mostly French influence
and both sides struggled to gain the upper hand.

Louisbourg was a city on the coast of Nova Scotia that had become a center
for the lucrative Cod fishery.
Control of this area was vital to France's control of Canada
and the Fortress was built around the town - the walls stretching over 2 1/2 miles.

The fortress construction took place over a period of 25 years.
At the time it was the most expensive and strongest fortification in the new world.
King Louis of France once joked that so much money has been spent there that
he should be able to see the fort from Versailles.

The town thrived within its walls and all seemed fine.

Its position provided control of both the St Lawrence Seaway and
the rich fishery of the Grand Banks.

After several sieges over the years the British eventually conquered
Louisbourg and destroyed the fortifications and the town.

Fast forward to the 1960's
The Canadian Government decided to undertake an enormous reconstruction project
and bring back a piece of their history.

Archeologists, historians, craftsman...
All were gathered for this project that so far has lasted over 5 decades.

From our home at the Cabot Trail KOA it was about an hour and 20 minute drive to Louisbourg.

Arriving at the visitors center.

Our Parks Canada Annual Pass that we purchased in Banff last May once again
allowed us to enter for free.

The 2016 Pass is valid for TWO YEARS rather than the normal one year
in celebration of Canada's 150 year anniversary of Confederation.

Our visits throughout Canada have already paid off the pass and we still have 20 months left!

The Fortress is seen in the distance from the Visitors Center.
Busses take you on a drive of perhaps 5 miles to the Fortress.

The Kings Bastion.  One of 5  that surrounded the town.
It contained barracks, Armories, the Governors residence, Chapel, & Kitchens

The outer walls had cannons mounted.

Looking inside the Bastion towards the ramparts where the cannon were placed. 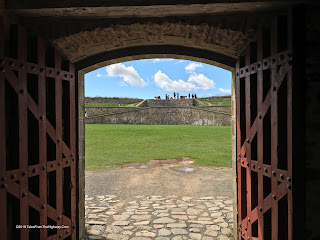 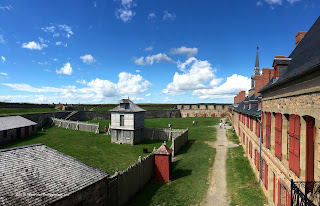 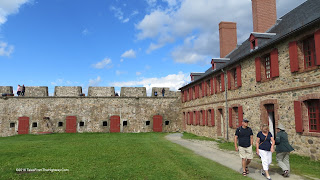 Inside the courtyard looking at the ramparts. 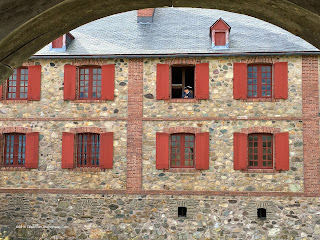 The Chapel inside the Kings Bastion.
One of the barracks.
Here the soldiers slept, cooked, ate, and played.
It was their entire world.

One of the bunks. 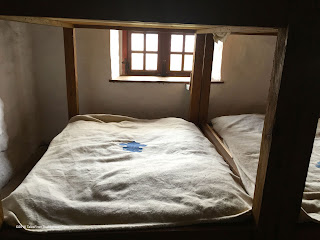 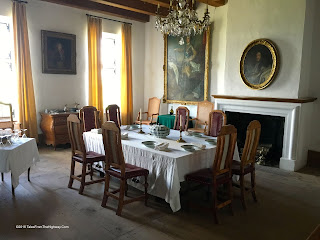 The governor also had a slightly better sleeping arrangement than the rank and file.

This room was where the town council would meet.
Matters ranging from Municipal governance to judiciary took place here. 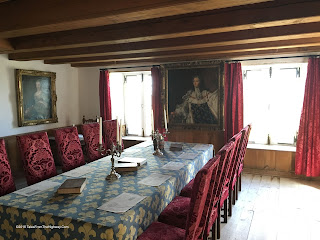 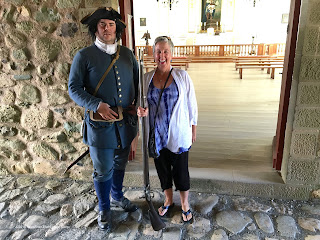 The fortress was not just a fort - but a city where people worked and played.
The fortress surrounded and protected the town.

Some village scenes below. 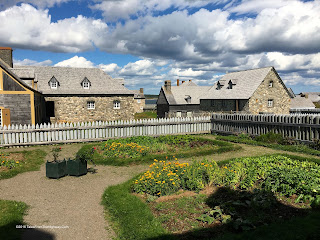 A person in period dress crosses a back yard 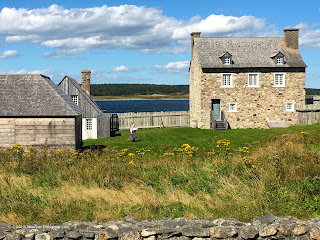 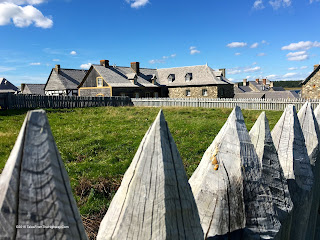 Buildings along the waterfront. 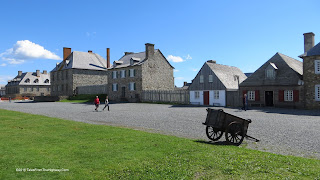 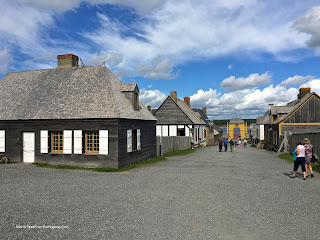 Its important to note that the town had been destroyed but the French left
exacting details of the construction of the town and fortress.

Those plans, in conjunction with detailed archeological excavations, allowed the Canadian
Government to reconstruct the town to exacting details.

Minute details such as hinges and doorknobs were all painstakingly
recreated in the rebuilding of the fortress.

Those period furnishings that could not be found were recreated by craftsman.
The work that has gone into recreating this place over the past 50 years
is truly impressive.

This area had a large coal mining population that had dwindled with the fortunes of coal,
so the Canadian government retrained many of them in the skills required of an 18th century craftsman to reconstruct the fortress and town.

The cost to do so must be enormous.

Kudos to you Canada for your commitment to preserving your past!
Well done!

To this day only about 25% of the Fortress and town have been rebuilt,
but it is enough for you to be transported back in time and to see what a real
18th century village would have looked like.

While visiting we stopped at a pub for some lunch and again it was as if we
were transported back in time.
Waitresses in period costume served fare that would have been typical of the time.

A bib made of linen was wrapped around my neck and our entire meal was
eaten with a pewter spoon.
The meal was quite good and reasonably priced.

I think my checking my iPhone for work related emails might have been a bit out
of character but other than that, it was a step back in time.

We stayed at the Cabot Trail KOA for 2 nights due to location.
There are a couple of other campground within 10 or 15 miles that would also
most likely have been fine.

Typical KOA spaces.   We had a 30amp full hookup - again only hooked up
the electric as we will have FHU at our next stop too.
The power worked fine and the hosts were friendly and led us to our site.
Traveling east on TC-105 you come down a steep grade just before the park. 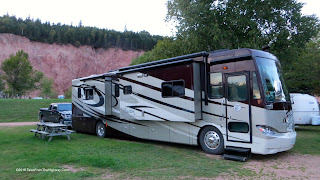 Our view thru the windshield was across Bras d' Orr Lake.
We did not have satellite due to the mountain behind the coach was blocking. 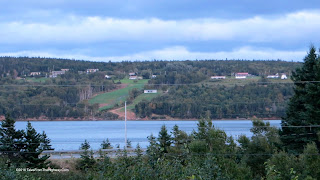 We are not in Cape Breton National Park up on the north west corner of
the Province.   We are staying in the Broad Creek Campground and there are only a few other
people here in the campground.

It's full hookup / 50amp service so we are running appliances with wild abandon.
I selected this site (#55) with surgical precision to allow me to catch the satellites thru the trees.

I then switched from NYC locals to Brattleboro VT since the Broncos would be on CBS
in that market Sunday, and their CBS station is on the 119° spotbeam which reaches up to here.
Finding a CBS station on the 119° was critical because the 110° spotbeams do not make it
this far north in this location.

I could have simply stayed on NYC locals and watched their game but
its all about getting it the way I want it.

Its been raining hard all day so its Cozy time in the Bus.
Saturday morning however has dawned clear and cool - a great day to drive the Cabot Trail.

More from Cape Breton next time.