Cape Breton and back to Fundy

Our next stop in our Canadian Maritimes journey was Cape Breton National Park.
We stayed in the Broad Cove Campground which is just
north of Ingonish Beach on the eastern coast of the cape.


The rainy drive up on the Cabot Trail to Ingonish was interesting.
Alternating stretches of straight and very winding roads was mixed
with a couple of very steep grades that took us up into the clouds.

One of the grades was so steep that it was 1st and 2nd gear up the hill.

We did not get any pictures of our campsite.
We were hunkered down the first day in a driving rain and then
once the clouds parted we were out exploring and I just forgot.

Here is a view out the front window of the bus from the GoPro.
It gives you a decent overview of the place.
The campground was sparsely populated and I was able to select a site where
I could get a view of the satellites.
A change of locals to Brattleboro VT allowed me to receive the 119° spotbeam and
their CBS station which was carrying the Bronco/Bengals game on sunday.

All sites in our loop were 50amp Full hookups, and about 75% long pull thrus.
Our site was #55

We'd not been hooked up to water or sewer for 5 days so we took advantage
of all the utility connections, hooked up,  and ran the washer/dryer and took long long showers
with no concerns about water useage.

Saturday Morning we hit to road in the pickup to explore the cape.
We took the Cabot Trail north from our camp and then west over the interior highlands,
and eventually south into Cheticamp on the west coast.

The Cabot Trail is world famous for it's scenery.
There are numerous stops along the way to take in the vistas.
Driving the Cape counter clockwise would be the logical choice if you were going one-way
since the pull-offs would be on your side and no crossing of traffic would be necessary. 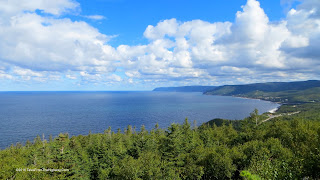 The road ribbons and snakes its way thru both mountains, forests, and sea-scapes. 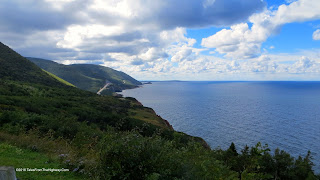 About 65 miles later we stopped at St Pierre's Catholic Church in Cheticamp.
This area of the cape is mostly French speaking Acadians.

The Parish was founded in 1785 and the present church constructed in 1893.
It is one of a few stone churches, and certainly the largest, on the Cape.
It is oriented east to west like many in the region and its silver painted steeple is similiar
to Acadian Catholic churches over in Acadian New Brunswick. 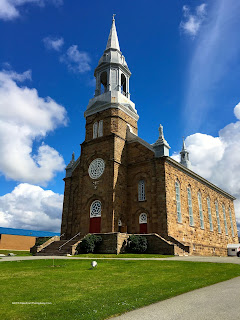 The beautiful interior is Baroque in style. 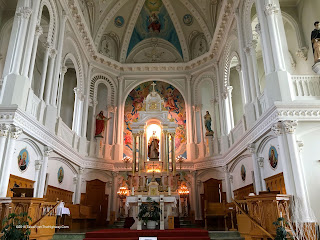 A view from the second level by the organ. 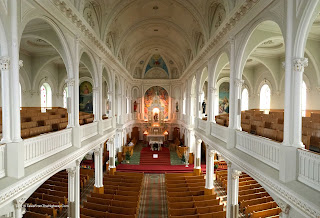 After visiting St Pierre's we made a u-turn and headed back to Broad Cove.
Headed in the opposite direction always gives you a completely different view.

Along the way we stopped at the Rusty Anchor in Pleasant Bay for lunch.
My lobster and scallop stuffed wrap was fresh and delicious.
After lunch it was back east over the highlands to the east shore and home.

Here is a drivelapse from the Broad Cove Campground on the east side of
the cape - to St Pierre's Church in Cheticamp on the west side.
It covers about 70 miles in 4 minutes and crosses up and over the central highlands enroute.

We left Broad Cove on a mixed weather morning and headed south.
Our destination was Five Islands, Nova Scotia on the west shore of the Bay of Fundy.

We had originally planned on staying at the Provincial Park but our weather report was
dismal - calling for several days of cold weather and rain.
The provincial park has no utilities.
It would have been a couple of days with poor solar output and the heater running
so we opted for the RV Park right down the road and on the water.

Our site at Five Islands Ocean Resort.
I think "Resort" is a much overused word in the RV Park business, but the
park had a great view with full hookups so it fit our needs.

My 50amp connection had an open ground so I plugged into 30amp.
After fully hooking up and dumping tanks at Cape Breton,
we were back to just using the electric hookup. 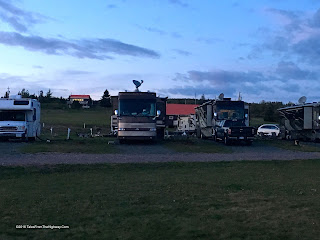 The view out the front window at sunset our first night. 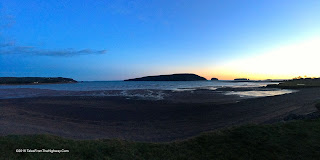 Sunrise the next morning...
The tide has already started to come in, but at low tide the ocean floor is exposed
for 2 miles all the way out to the island in the distance. 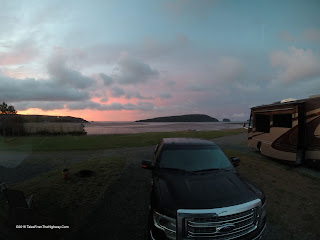 The water has returned...  in more ways than one.
Shortly after this picture was taken (by the GoPro) the rains began
and continued all day. 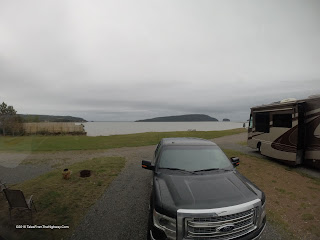 And here is a 1 1/2 minute timelapse of the tide coming in.   Most of the water arrives
in the last 30 seconds.   Also notice the guy next door.  His satellite dish is looking for
satellites and gives up....  then starts again.


We spent the rainy day inside.  I was working and Kate enjoying the down day.

Our next stop is Fundy National Park in New Brunswick.
We are in the Chignecto campground site #A2
A super long pull thru with FHU and 50amp.
And again - I am able to shoot between the trees and grab the 119° satellite.

We are enjoying the start of fall here in Canada.   It looks to be a very pretty one
this year because already many trees are showing vibrant hues.

The colors, plus the pines.
Many of the trees here are the species that people buy at Christmastime,
and its fun to drive thru vast forests of Christmas trees.
It must be something when covered with a fresh blanket of snow.

2)    On the upper right of the blog you can click on the map to see where we are and have been.
Look for:   "where are we today?"

Once in the map you can click on "Tales from the Highway"  then "adjustments" to
select a time range - that way you can see a map of the whole trip or longer.

The photo below shows where to click when in the map.

The final subject of this post will be Hopewell Rocks.
A well know tourist destination about 40km north of FNP,
its is truly a worthwhile visit.

$10 admission buys you two days admittance to walk the trails that stretch along the
top of the cliffs for about a mile, and lead to several overlooks and eventually to
a platform with stairs that lead down to the seabed.

Our timing was fortunate in that we would be able to see high water and low water
in a single visit.   We arrived about noon which was 30 min past high tide.

From the platform near high tide. 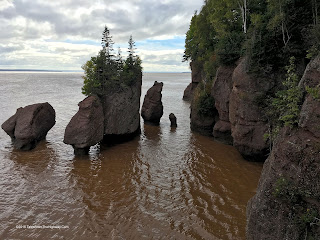 The first 3 hours of the tide change exposes the shoreside formations and makes the seabed
accessible.   In 3 short hours the tide has receded about 15'. 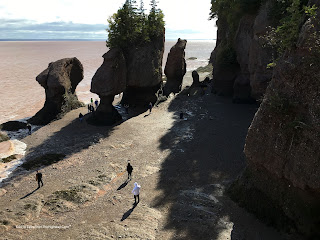 We descended the stairs and spent an hour or so walking down the beach into
the next cove.   In that time the water continued to move further away from shore and by the time
we left it was about 600' further out. 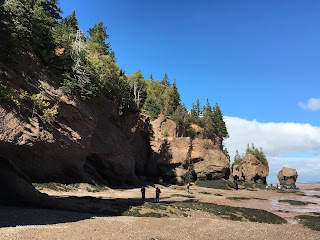 By this time it was close to 4pm and we headed back to home.

We stopped again at the Alma Harbor.
We had taken a picture of the boats in the harbor at high tide and I now
wanted to get one a low tide. 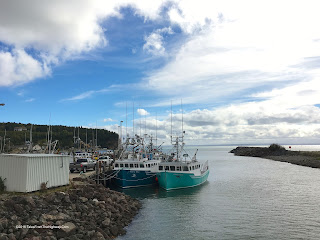 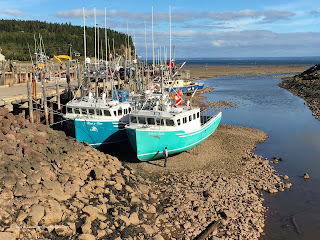 Can you tell which is high, and which is low tide?

Our next and final stop in Canada will be Saint John New Brunswick.
It is a short 90 minute drive from here and we will spend two nights.

After that, it's back into the states and 4 nights at a KOA on the water in Bar Harbor, ME.

Then.....  it's time to hit the pavement for Miami to meet our Swiss friends,
Marcel & Michaela who are flying in for 9 days and we will spend time with them
there and in the Keys.