Back in The Dog House and Blackberries Revenge

Its been a very busy week or so since our last post.
We left Oroville, Wa and headed south into an area that was in the middle
of forest fires.  At one point the road (US 97) we were to take was closed but opened up
just in time to save us a detour.

Here is a link to an article about the fire we were headed towards.

As we headed south the smoke increased as the visibility decreased.

As we entered the town of Pateros we saw dozens of homes that had burned to the
ground just the day before.  The town had no water, or electricity.
You can see downed electrical lines in the photo below. 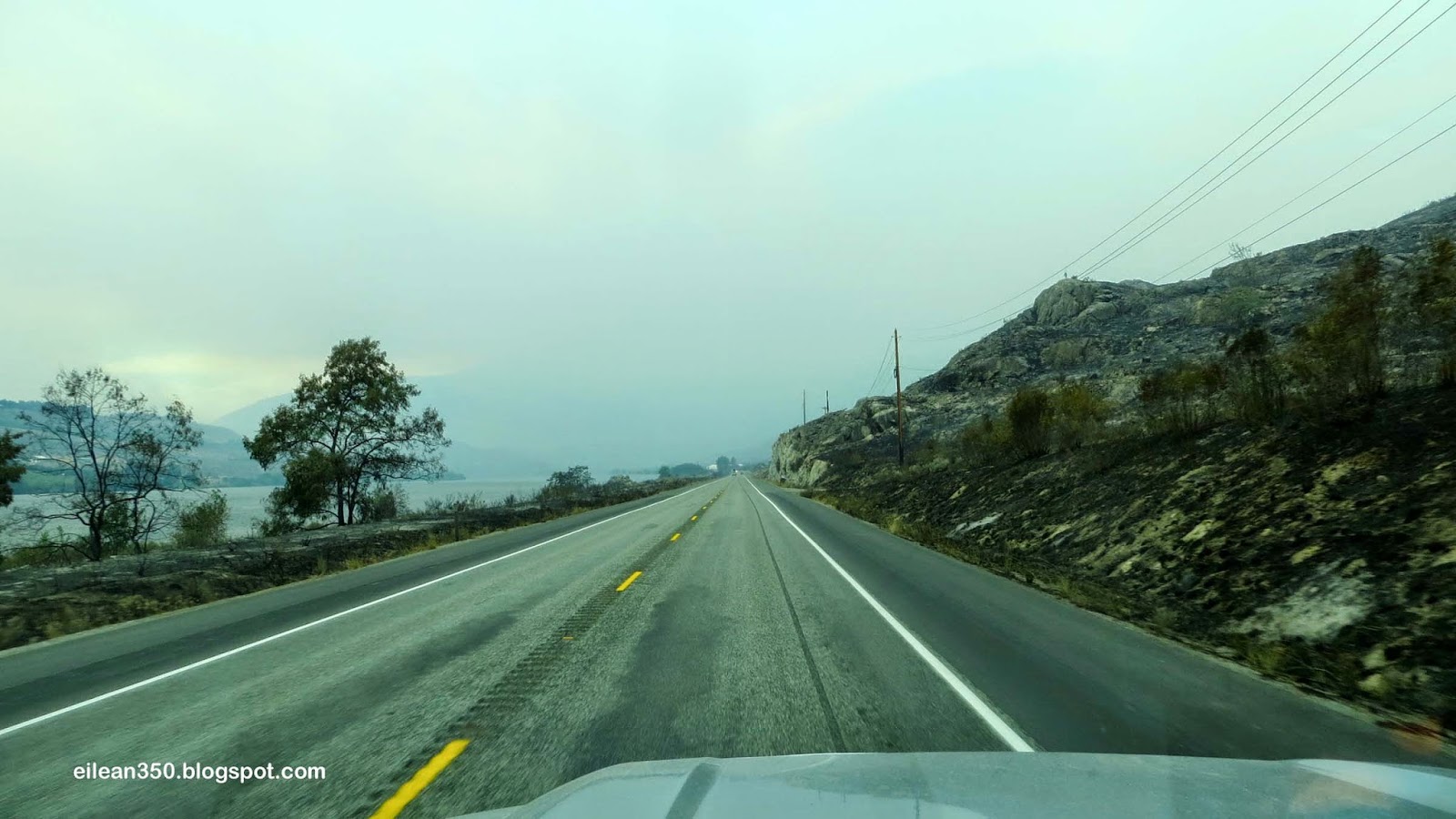 As we got south of town, we emerged from this smokey hell into a clear blue day. 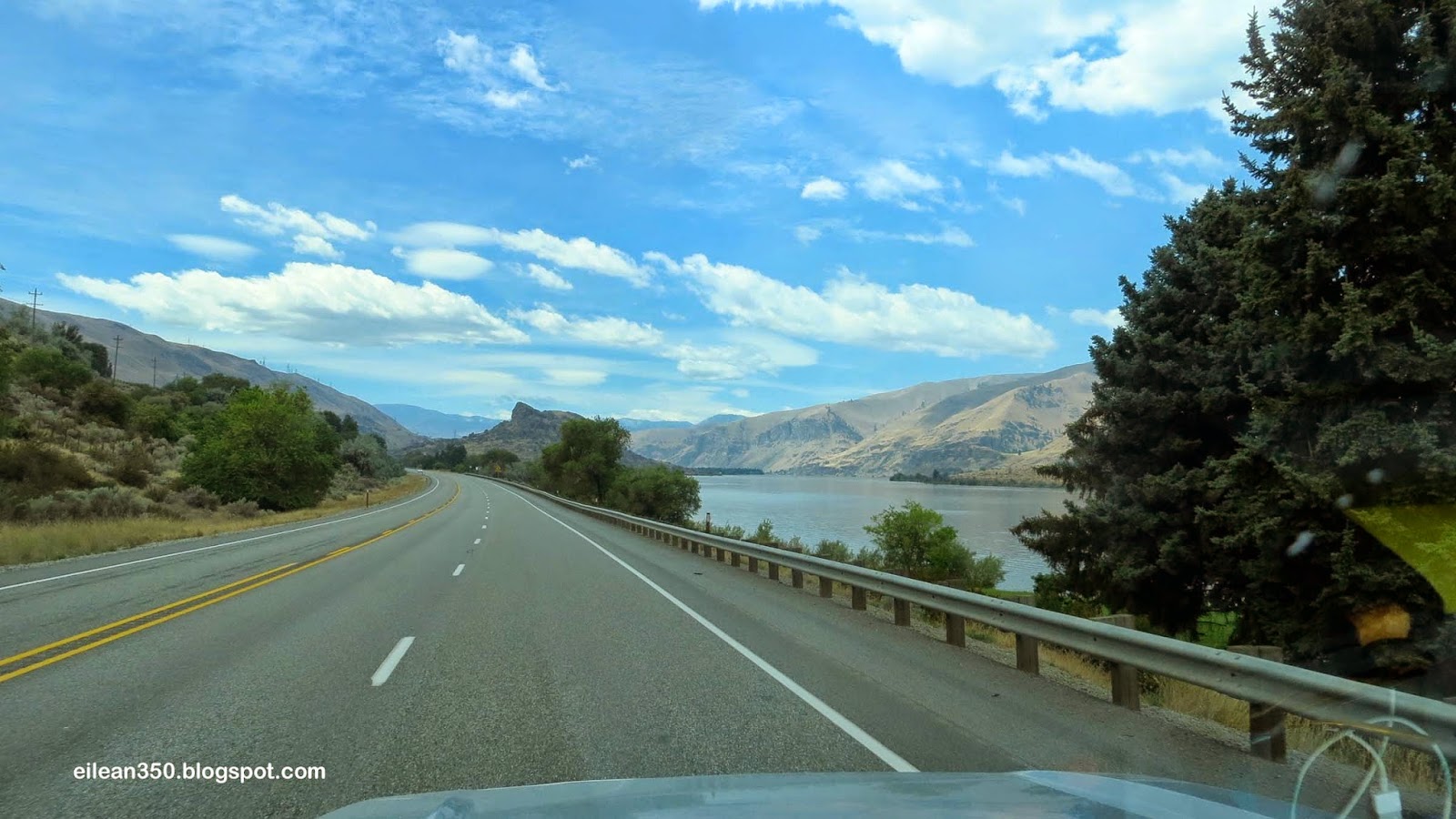 Our destination was the KOA in Ellensburg Washington where we stayed for 4 days.
During that time we retrieved the Dog House from Jim & Kristi's place and moved from
the Montana into the DH.   The Monty is now residing at their Mountain Retreat.

Two days into our stay, our friends from Switzerland, Marcel, Micheala, and their
two young daughters, Francesca and Isabella arrived, rented and RV and met us at the KOA.

After our 4 days there we moved to the Timberlake Campground -
a nice RV campground on the Columbia River in Washington. 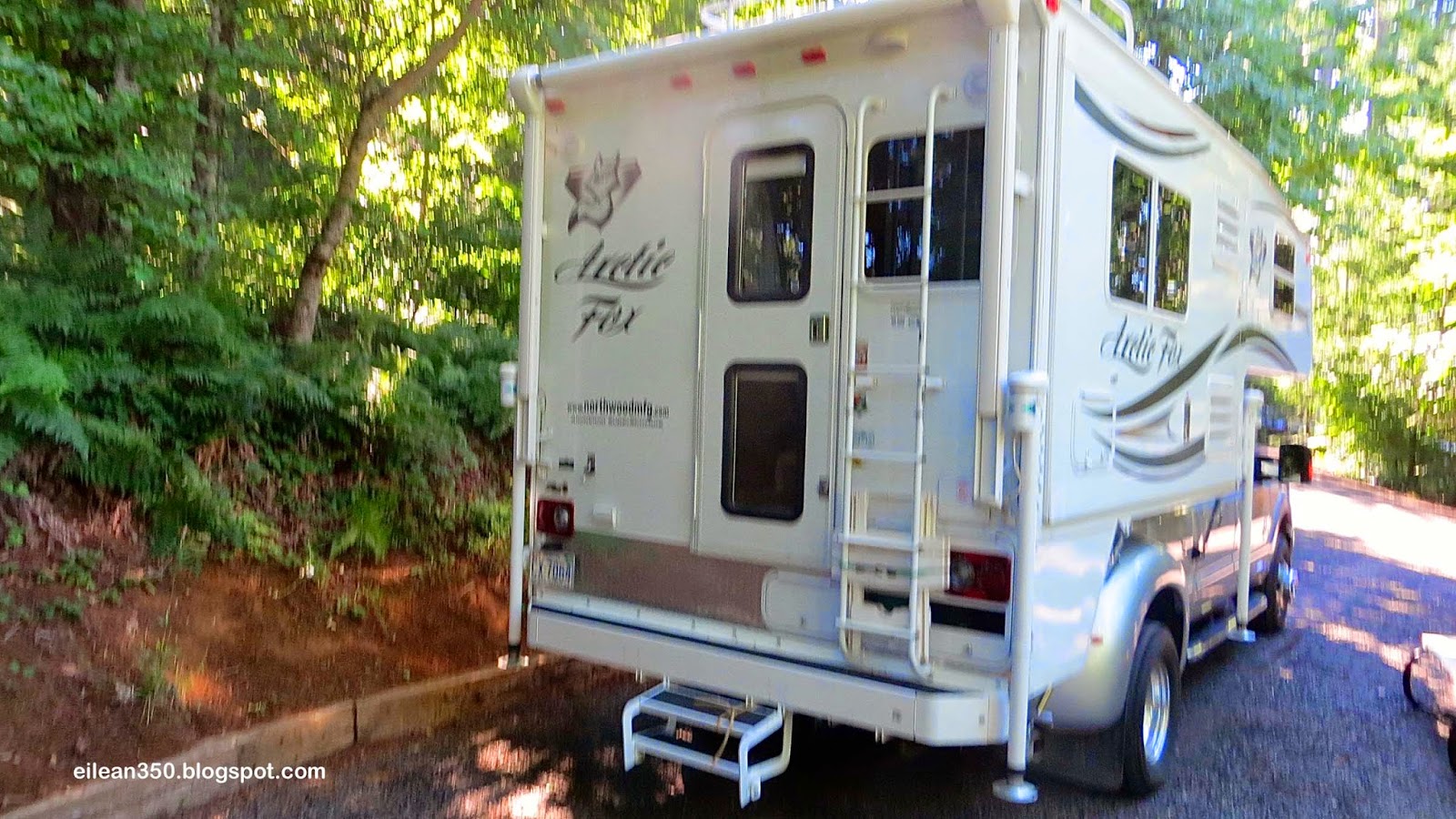 We visited the Bonneville Dam, and got to see the large generators
that supply power to the Northwest. 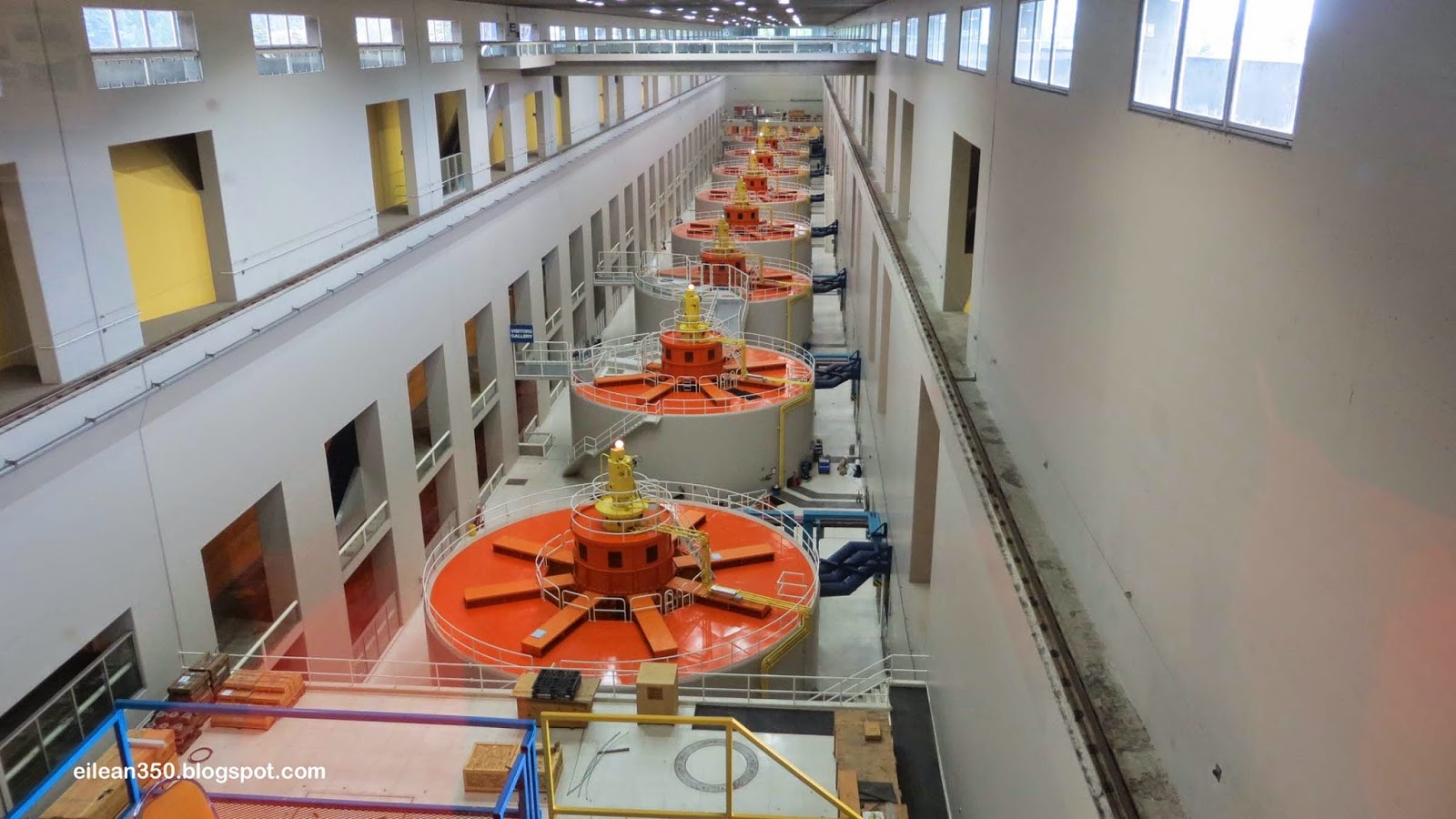 A view of one of the spans of the dam discharging.
The Bonneville dam is actually 3 separate dams across the river with two
islands in between. 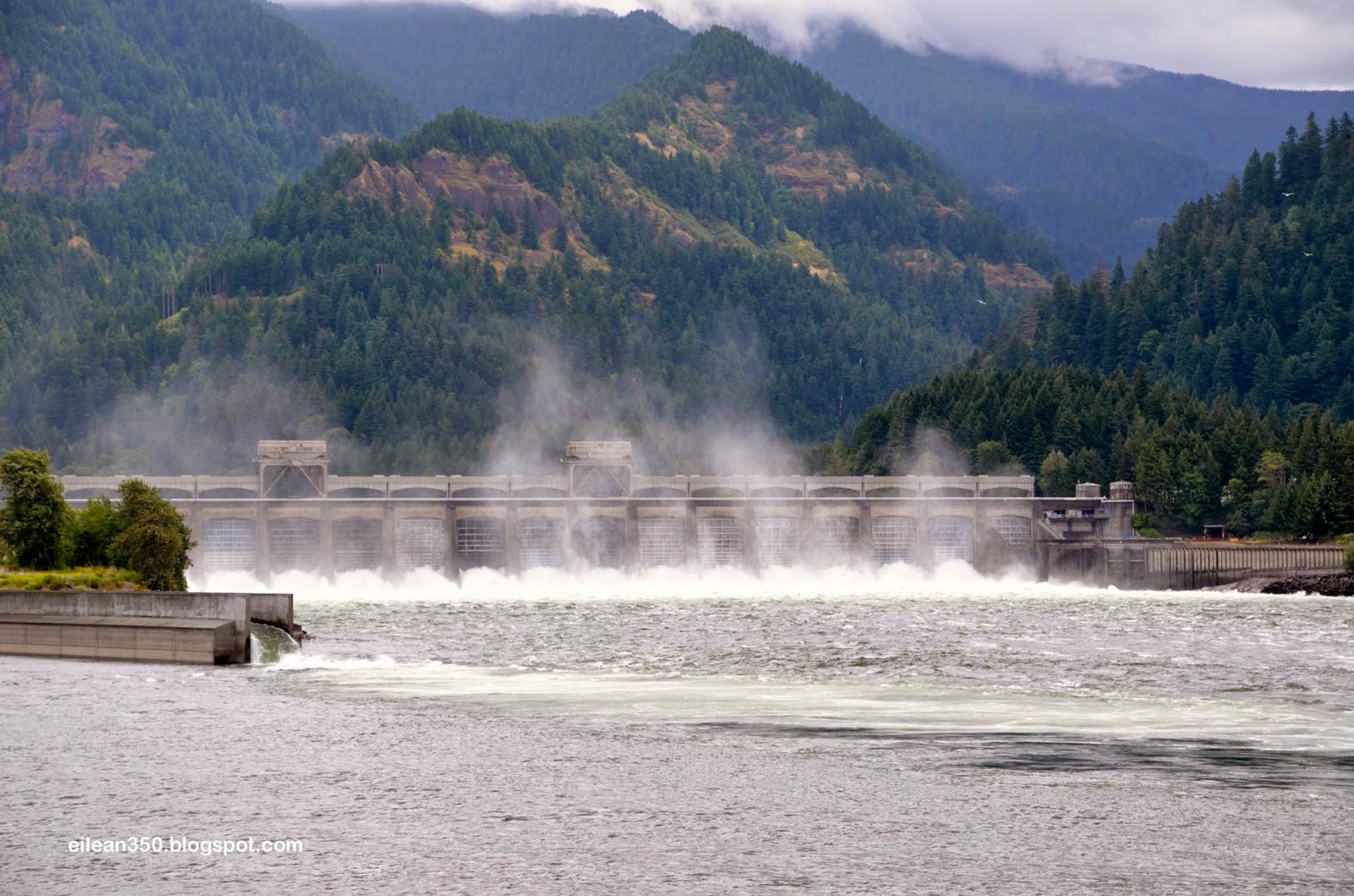 We also toured the fish ladder where you can see the fish migrating back
up river to spawn. 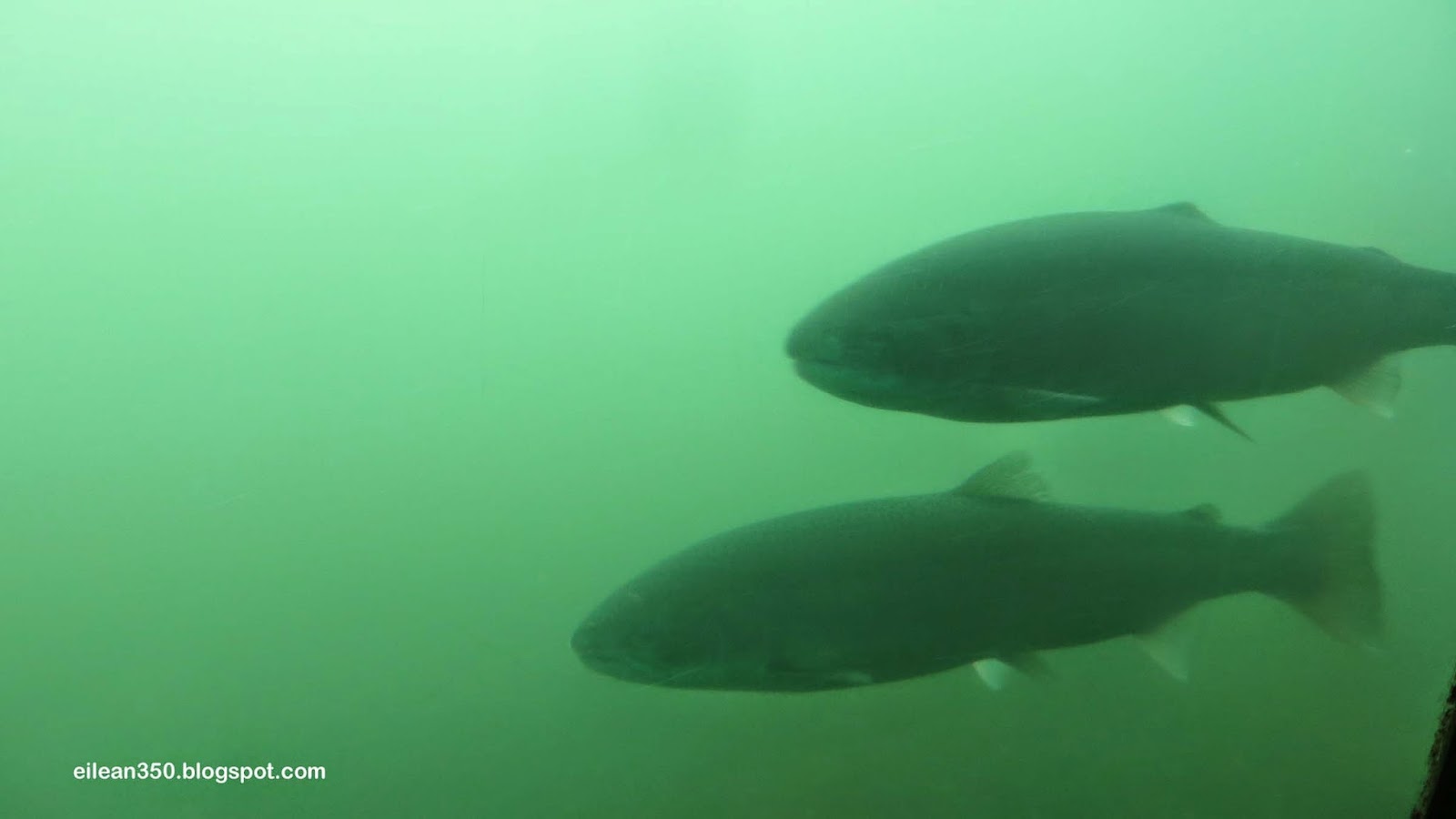 As we left the dam we stopped to take some photos and I spied these luscious
Blackberry Bushes that were loaded with delicious fruit. 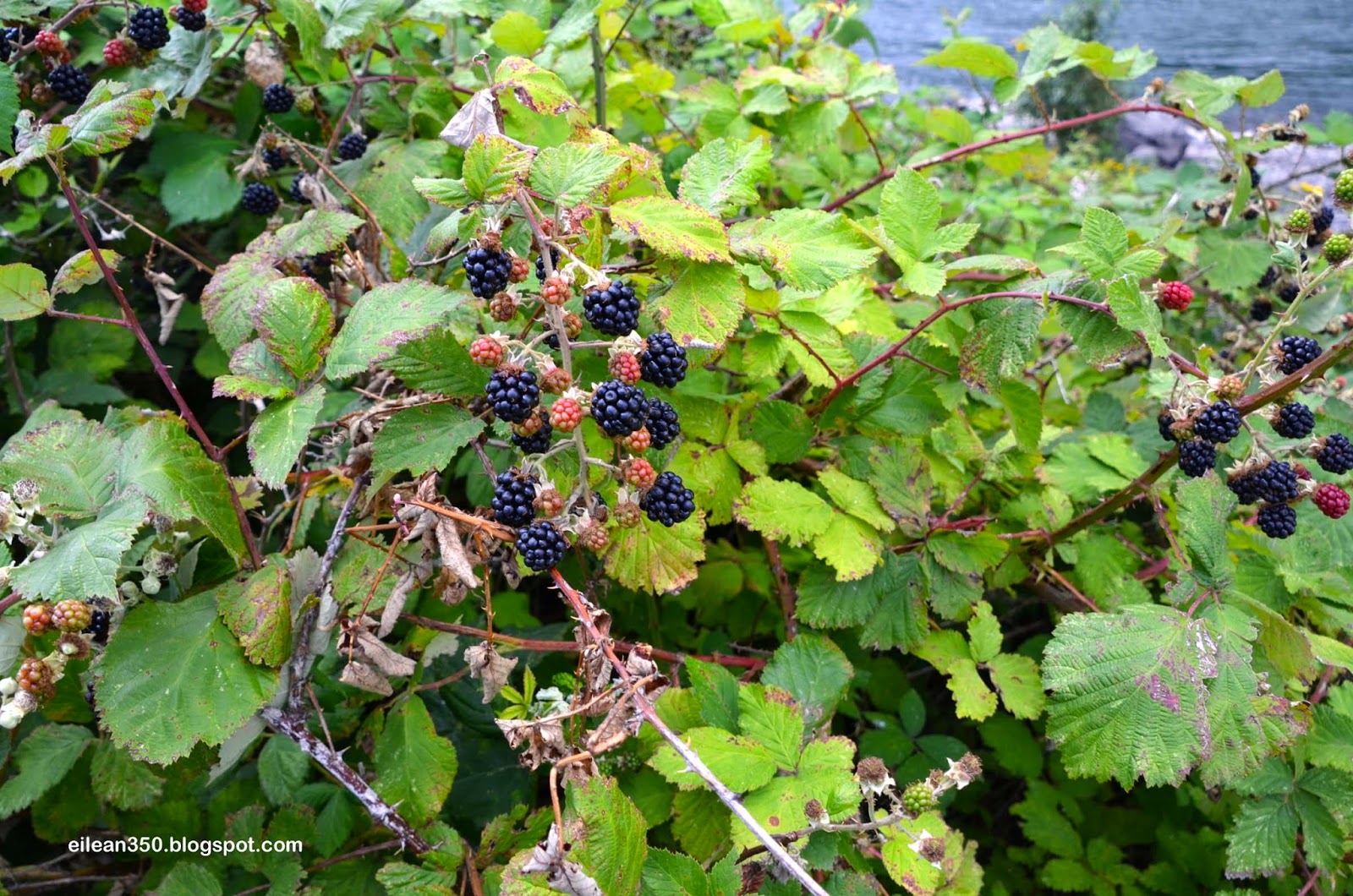 Now the problem....
I was wearing shorts.
Blackberries are covered with thousands of very sharp thorns.
My sneaker got caught on a branch of berries and I started to stumble into the bramble...
So I ran thru the bushes to keep my balance.
The end result was my legs getting torn up quite nicely.

Nothing that a trip to the pharmacy, some packs of gauze, tape
and Hydrogen Peroxide can't handle however.

While my legs were bleeding and the ladies were wrapping them up in paper towels
little Isabella was like the Paparazzi and taking a bunch of photos.
It was pretty funny.

We then went to Multnomah Falls, with a 620' drop. 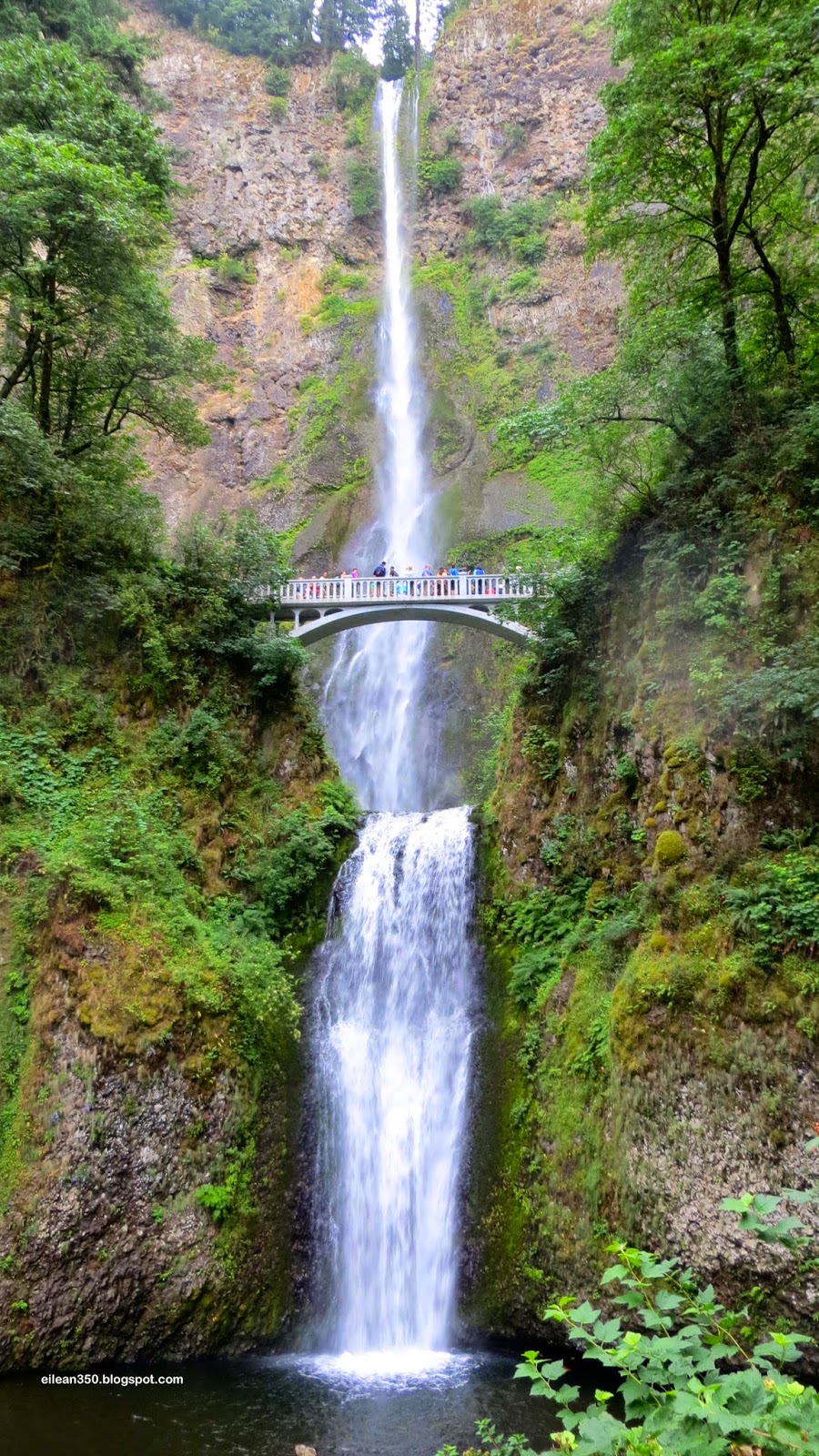 Later we all had dinner.
Michaela made a Bolonaise with Spaghetti. 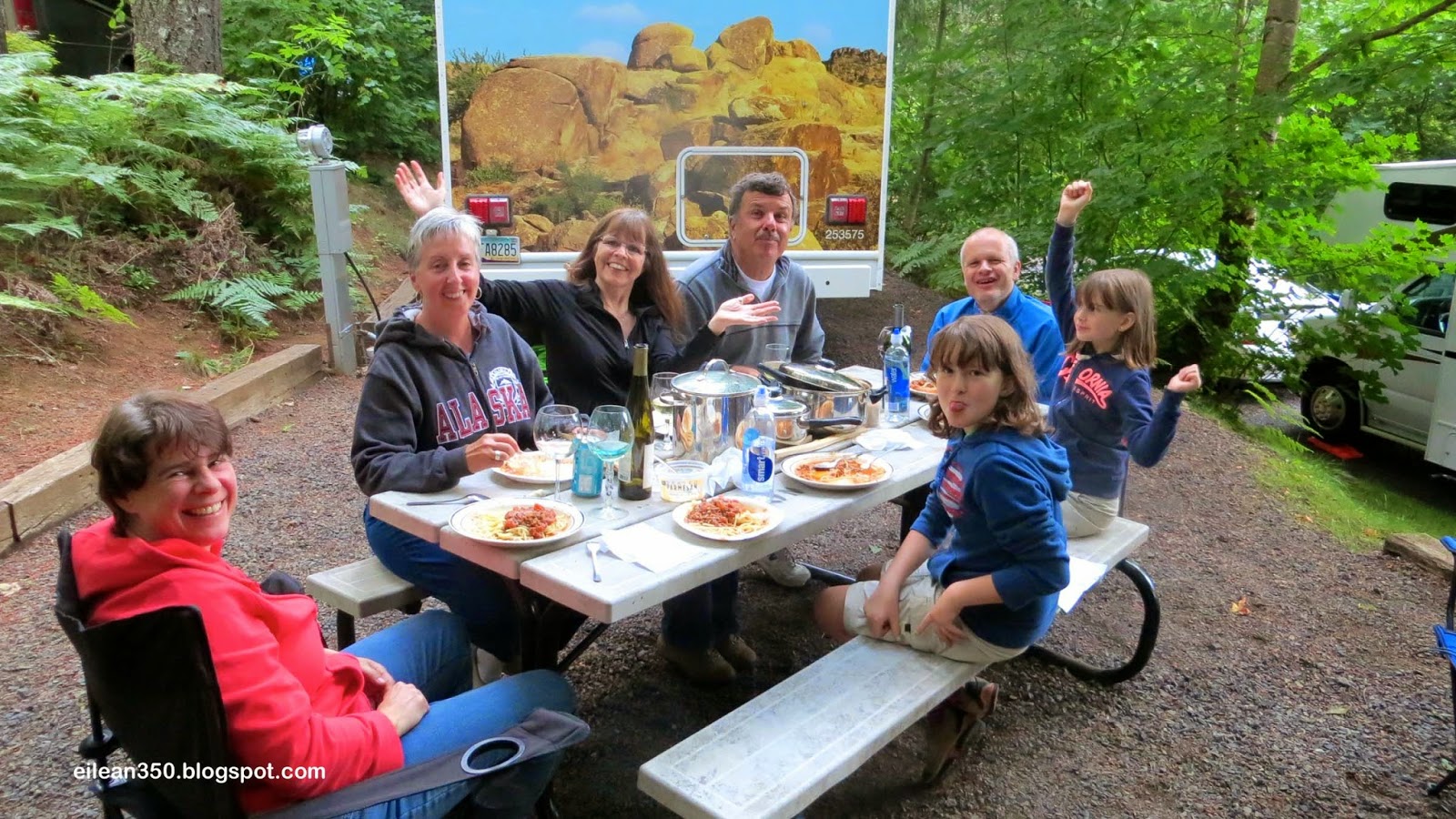 After two days at Timberlake we packed up and headed south to Sisters, Oregon.
Traveling the Mt Hood Scenic Byway - here they come with Mt Ranier forming
a backdrop. 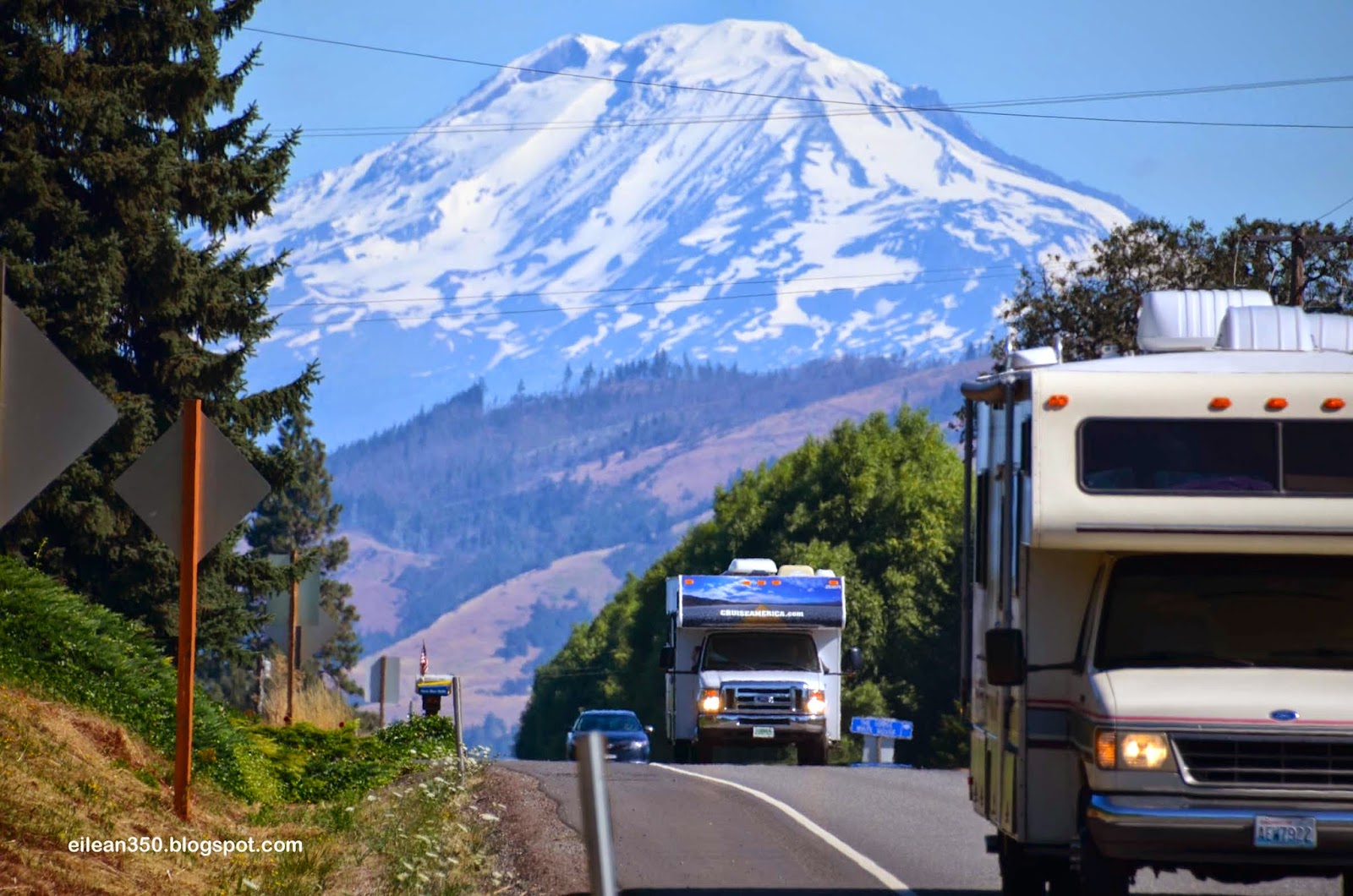 The highway rides up over the shoulder of Mt. Hood. 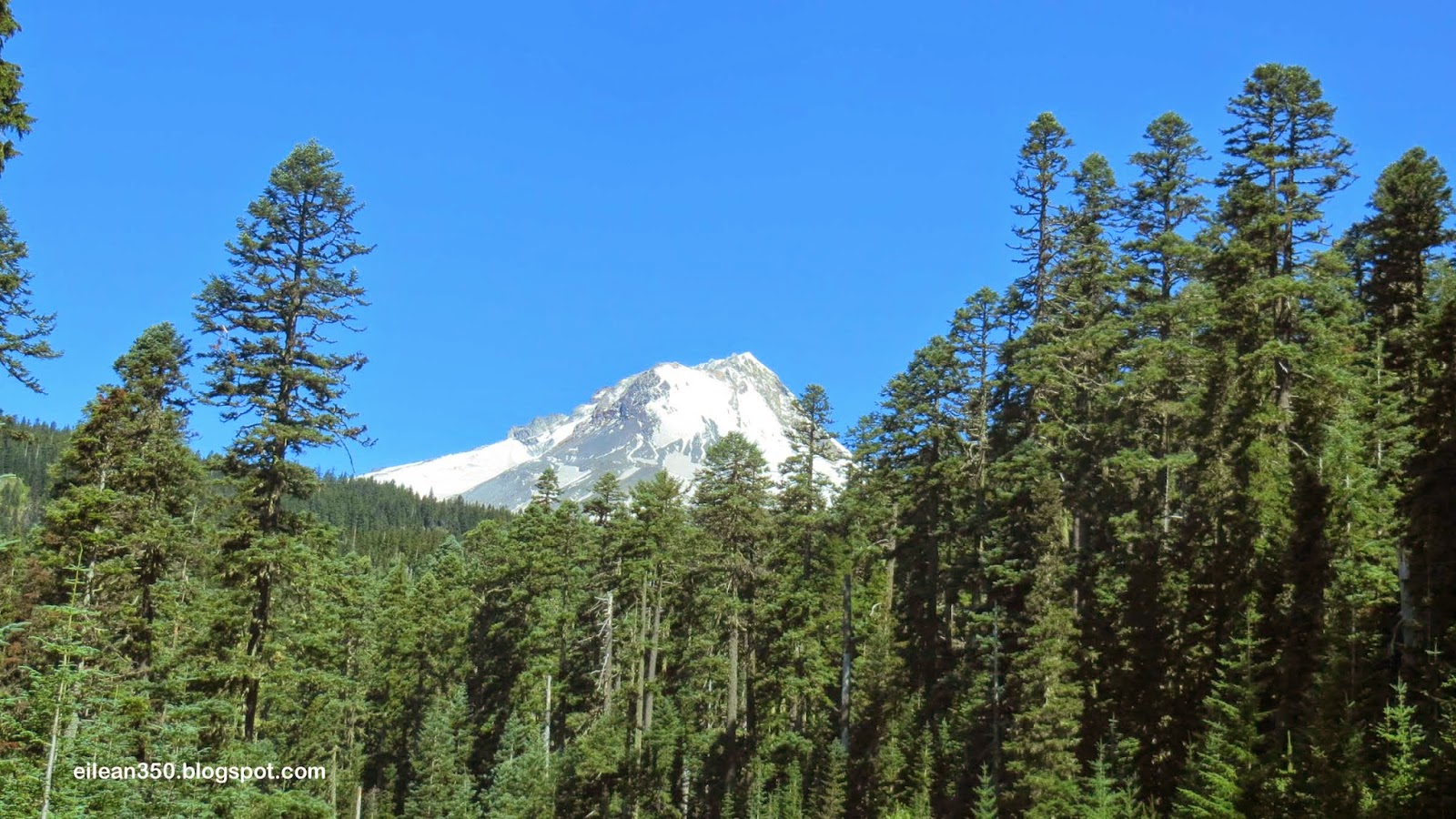 Our Campsite in Sisters is the Creekside Park owned by the city.
It is right in town and very convenient.
We are the far camper, then Marcel, then Ron on the right. 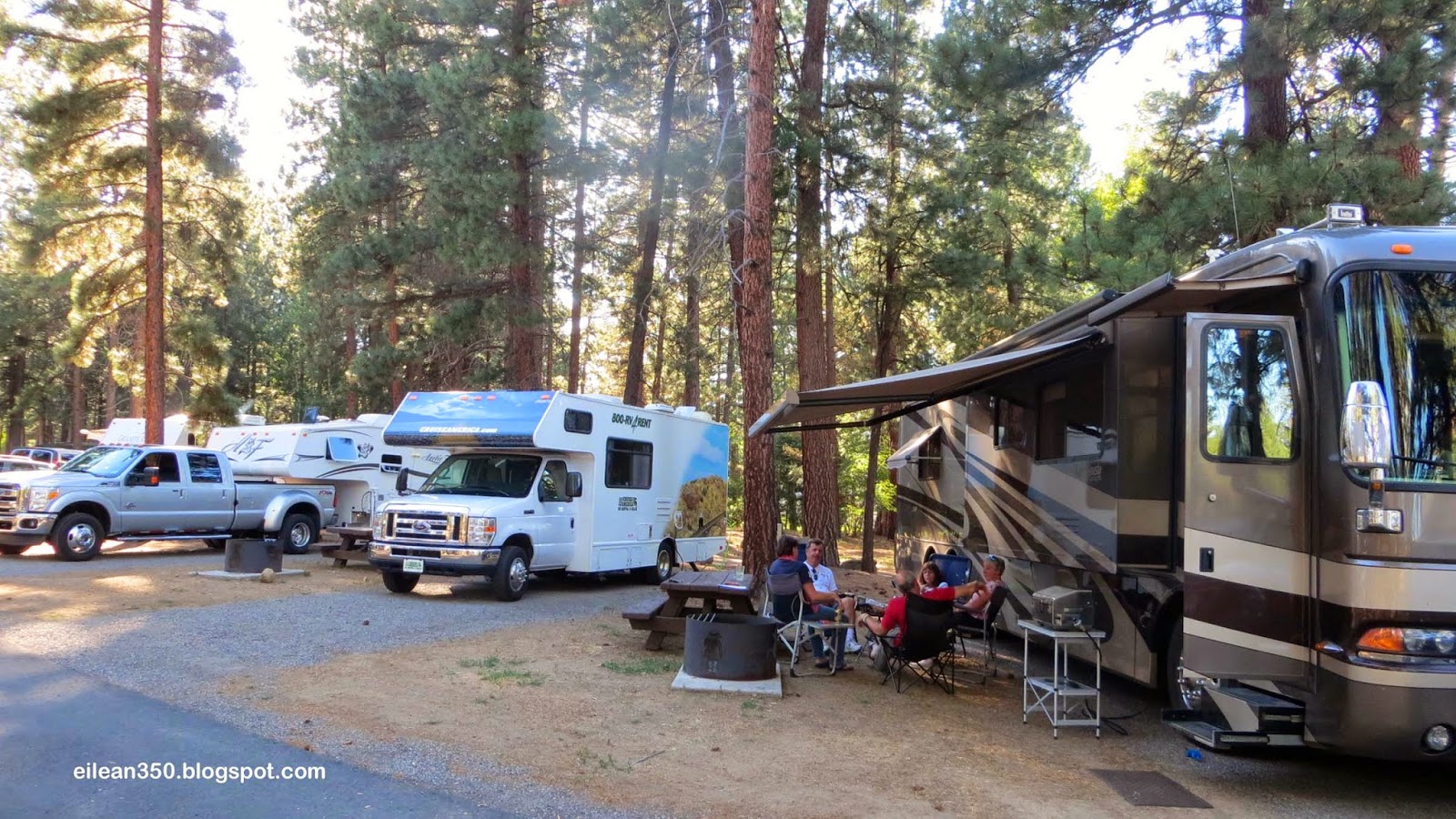 Today we spent some time in Sisters walking the streets and waiting for
Kate as she circulated in the gift shops. 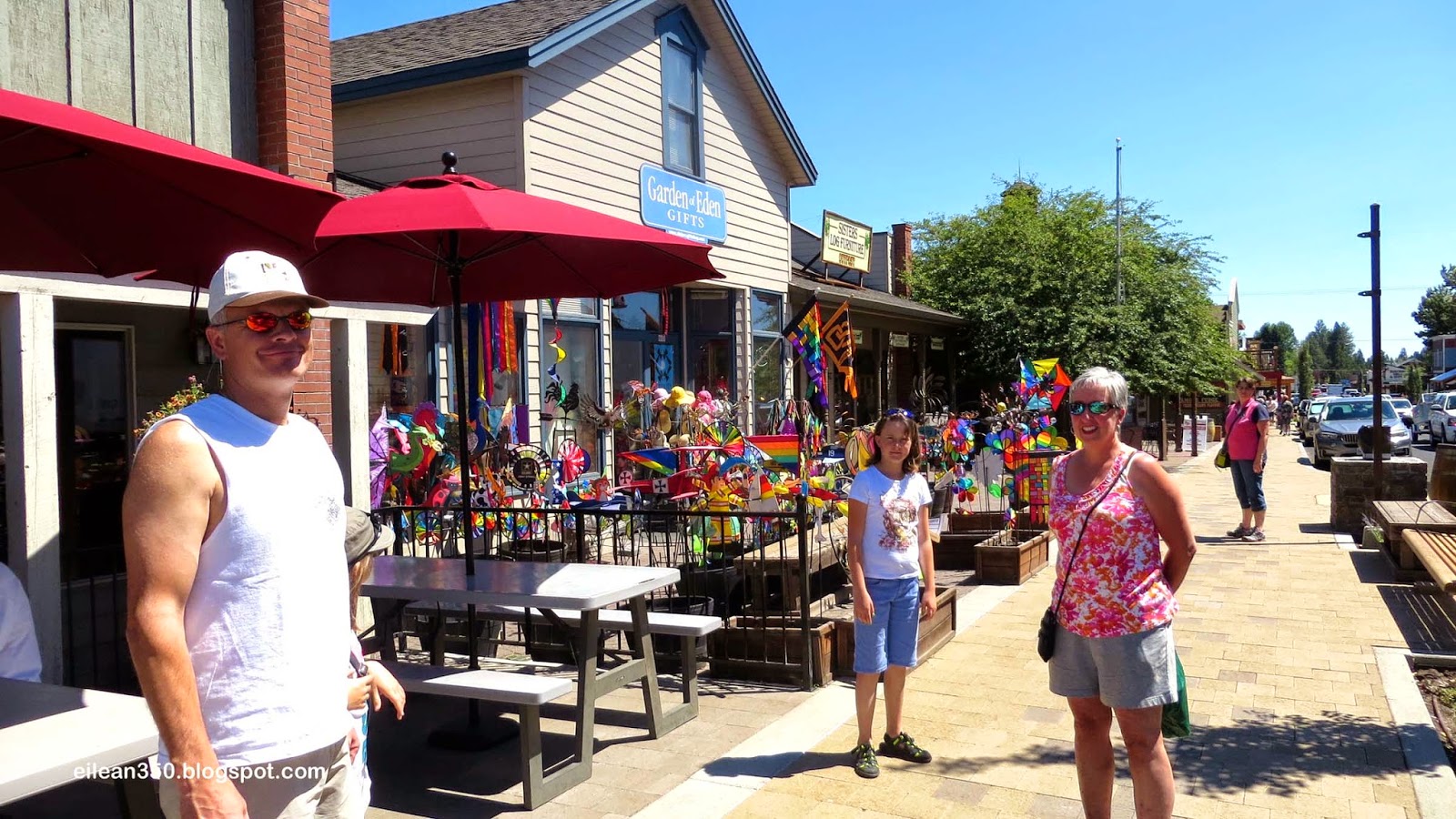 Later in the day I and the girls took a dip in the stream
that runs thru the campground.  The water was cool, clear, and refreshing. 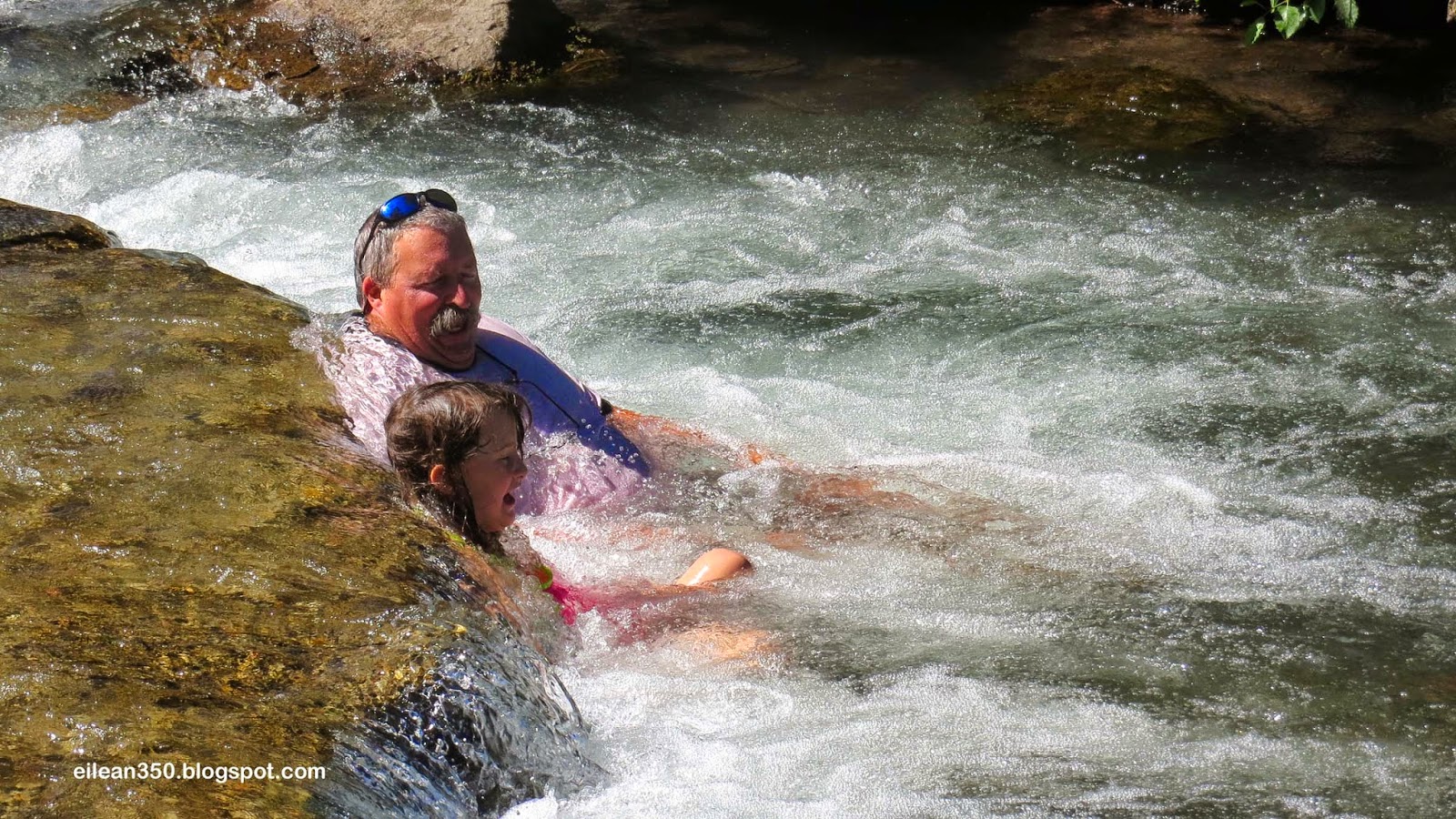 Isabella strikes a pose for Kate. 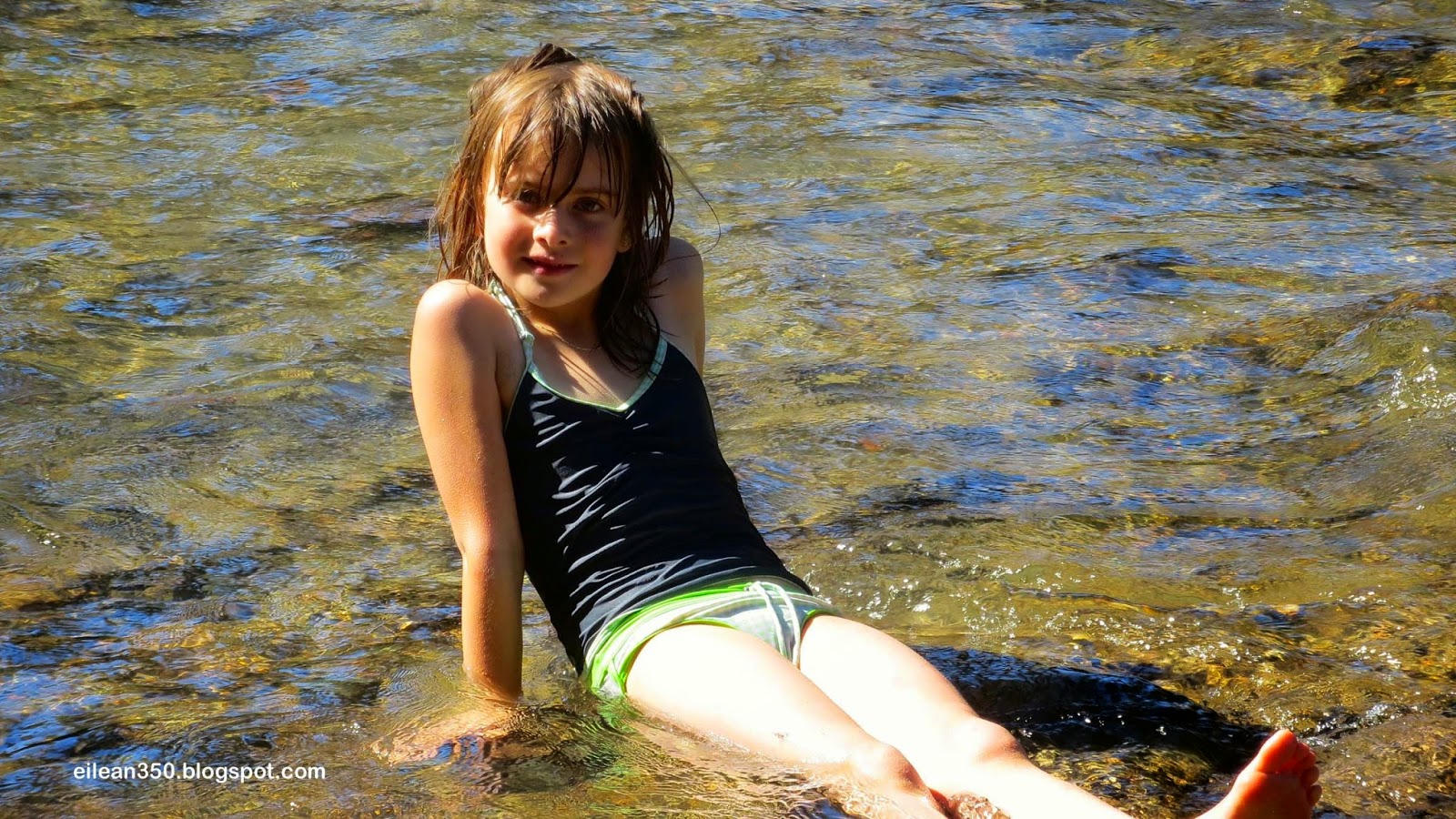 Tomorrow we will do some more exploring of the Bend, Oregon area.
Bend is a beautiful progressive city with a wonderful dry climate.
The Deschutes River runs right thru town and serves a great recreational
resource for the residents.  It should make for some fun people watching tomorrow.