The Fall Migration of the Island Packet

The past several days has seen a progression of southbound Ivory colored boats visiting the Marina here in Beaufort.
First we had the pleasure of Rubin, Bobby and the crew of Priority, an Island Packet 380 out of Baltimore enroute to Miami.  They spent about 24hrs before heading offshore bound for Charleston SC.
We had dinner and laughs till past midnight.
Their departure was timed in order to make it the 36hrs down the coast before a strong low pressure formed, and along with it, Gale Force Winds.
This is Priority and crew leaving the marina 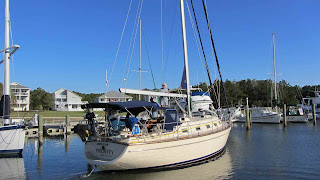 We chased them down the inter-coastal waterway and got this photo of them just as they exited Beaufort Inlet into the Atlantic Ocean. 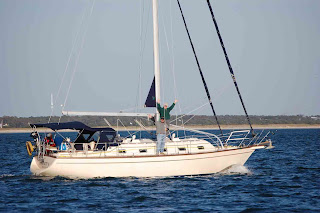 Less than 24hrs after the departure of Priority, we had the pleasure of hosting
IP35 "Island Spirit" with crew Hayden & Radeen,
and IP460 "Cutter Loose" Crewed by Eric and Patricia. 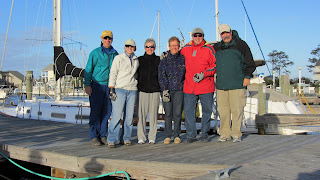 We were fortunate to be able to obtain 2 slips in our marina so that they could stay and visit for 3 nights.
The timing was perfect in that less than 24hrs after their arrival the promised low pressure developed followed by had gale force winds
up to 50kts blowing for almost 36hrs
Fortunately they were able to stay securely tied up to the dock and ride out the storm in comfort and safety.
This is Island Spirit squeezed into the slip next to our boat "ei' Lean".
Hayden did a heck of a job getting her backed in there. 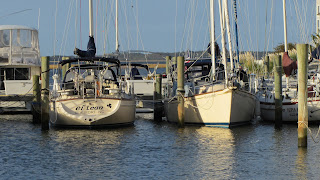 This is Cutter Loose in the spot vacated by Priority. 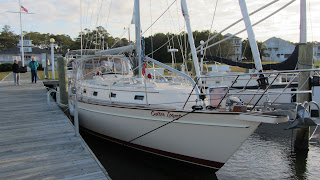 We all made good use of their visit with several dinners, lunch, lots and lots of laughs, and some local sightseeing.
We were able to show them a bit of our current hometown and a fantastic time was had by all.
Saturday we enjoyed a visit to Fort Macon State Park.  The 19th century fort sits right on the Atlantic and was constructed to protect Beaufort Inlet. 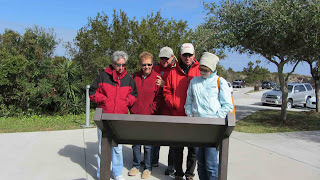 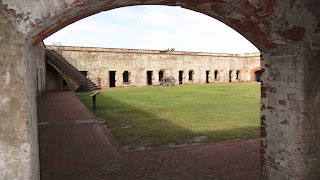 You can see by the flag that the winds are still howling! 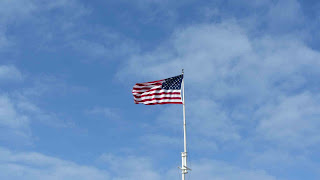 The visit was topped off when Radeen and Pat presented Kate with some of their signed artwork. 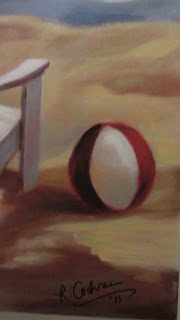 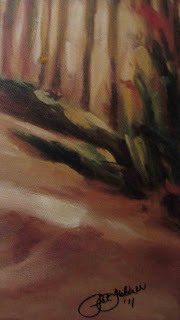 How nice!  What a great gift!  A reminder of a great time for us to treasure.
By Sunday morning the winds had calmed down a bit and the call of the Keys was singing in the rigging  so our friends cast off their lines and continued their journey south. 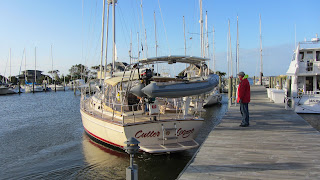 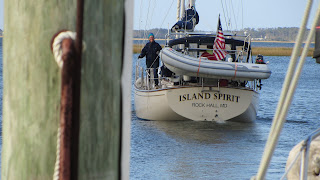 The cruising life reminds me in so many ways of my years spent as an over-the-road trucker driving semi's around this big country.
Along the way you meet great friends but inevitably the road forks.....
one must turn left....
while the other turns right.
The parting is always sad, but you know it's not good bye because sooner or later your paths will cross again in another place.
Until then more adventures and more new friends await.
Thank you Priority, Island Spirit, & Cutter Loose.
See you down the road!
Posted by GregK at 7:43 AM