Back across the pond

Well I said that I would probably finish the last post from Arizona, and guess what?
We are back in Arizona.
But I wont leave you hanging, and will get you caught up to date, but before I
do I want to step back to our day trip to Windsor to share a couple of items.
While waiting for our transfer train to Windsor to arrive,
these two trains going in opposite directions blasted thru Slough Station.
Trains passing at Slough
Then later after visiting the castle and arriving back at Slough for our
Eastbound train to London, this high speed Westbound flew thru the station.
I mentioned at the Tower of London about how the beefeaters will march over
or thru you when they are in formation and marching about.
These men of the Queens (now Kings) Guard were marching by when some tourists
got in their way.   You can hear the young soldier bellow at them to get out of the way.
Further along before the video ends he is yelling at more  tourists to get out of the
way but the camera did not pick that up

Now back to sea on the QM2

We pushed off from the dock in Southampton just before dark and as night settled in,
we headed down for our first dinner in the Queens Grill Resturant.
This was our first trip in QG and we were really looking forward to seeing what it was like.
To explain - Cunard has basically 3 levels of service.
Think coach, business, and first class as a comparison.
Britannia is the first level.
This is smaller cabins, fixed dinner times and 2 sittings of 1,000+ people each
in the Britannia Dining Room which is a beautiful 2 story room that spans the width of the ship.
Cabin sizes range from about 170 - 270 square feet.
These are very nice accommodations and service - but at a more reasonable price point.
Britannia Club is sort of a sub level of Britannia.
Pretty much similar cabin size, some better locations, but the biggest draw IMO
is that you eat in a small more intimate section of the Britannia Dining Room, and
have your own table with open seating dining time.

Princess Gill is the second level.
This is where you start to get up there in Luxury Accommodations
The cabins all have balconies and average 381 square feet.
In addition to numerous room perks like walk in closets, concierge service etc.
Another feature of Princess Grill is a separate dining room with expanded menu options
and seating for 150 making for a more intimate dining experience.
In PG you also have your own table for the voyage and open dining hours.
Queens Grill is the top level.
This is the top of the line on Cunard.
The cabins range in size from 506 square feet all the way up to 2,300 square feet!
The latter cabins being 2 floors tall.   These are the cabins where the rich and
famous lay their heads.
Queens Grill guests enjoy not only larger cabins, but also Concierge
and 24 hour butler service.
A big draw of QG is the Queens Grill Resturant.
Larger than PG it seats up to about 250.
Here the menu is much more extensive and if a guest wants something that is not on the menu,
if the ingredients are on board - they will prepare it for you.
Several nights on our crossing we had off menu items.
After finishing our first dinner we retired to our cabin around 9 and shortly thereafter
an announcement came over the PA system that there was going to be a medical
evacuation and the outside decks were going to be closed.
It seems that only about 4hrs or so after departure, a guest was ill enough to need to
be airlifted off the ship.
The helicopter made several pickups by basket.   We could not see the actual
airlift, but the helicopter hovered right off of our balcony for about 40 minutes as it
made several trips to the ship and then hovered off the side as they did whatever it was
they needed to do on the ship
Here is a video of the helicopter.
After that initial excitement, the ship turned back eastbound in the Channel and
we headed to NYC 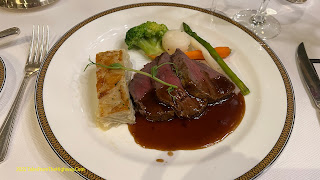 Continuing the beef trend we had an off-menu Beef Wellington,
also finished at the table. 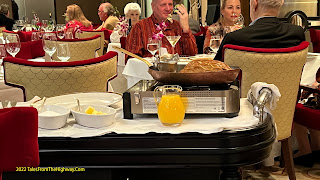 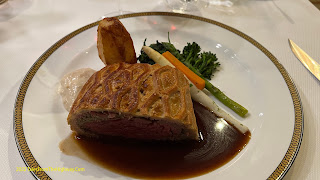 Washed down with Crêpes Suzette 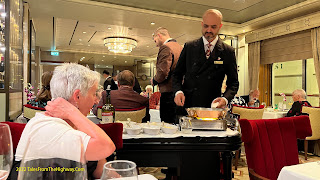 My favorite meal this trip was another off menu item - a Rack of Lamb also
finished table-side. 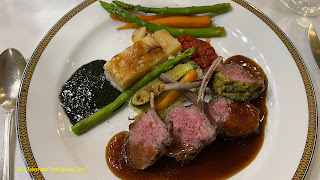 And again - another off menu item - our head maître d' Osman prepared us pasta.
We told him to surprise us with whatever he wanted to prepare, and we were not disapointed. 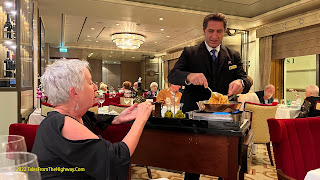 And again - washed down the pasta with some flaming Cherries Jubilee. 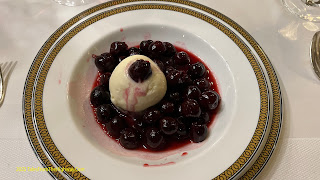 Another night Baked Alaska was on the menu for desert. 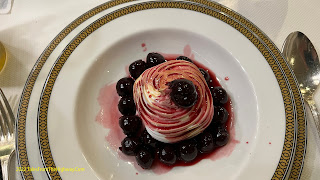 This was just a small sample of the dinners that we had.
There is also lunch and breakfasts....  but I think you get the idea.
Each day around 430 our butler would bring canapés to our room in order to wake up
our taste buds (as if they ever slept) before dinner.
Before I could get a photo, some were always missing but you get the idea.
Not being an expert in Caviar - most of what I've learned came from the movie "Overboard":
Caviar should be round, and hard, and of adequate size,
and should burst in your mouth at precisely the right moment.”
The golden caviar fit that definition precisely.
Below was mozzarella, sun dried tomato and some sushi and rice rolls 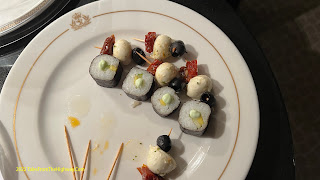 And more Smoked Salmon and 2 types of Caviar. 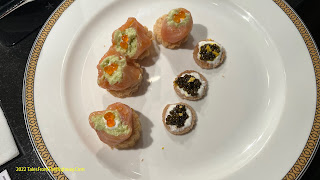 No Cunard crossing would be complete without a mention of afternoon tea.
Previously I've never made it to tea as I was always up in the kennels.
Tea is at 3:30p and each day we wanted to go but were too full from lunch.
So... the solution was to skip lunch and finally we made it. 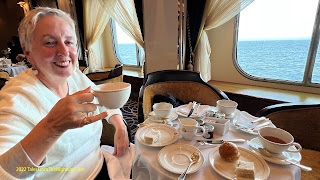 And no tea is complete without some scones, clotted cream, and preserves. 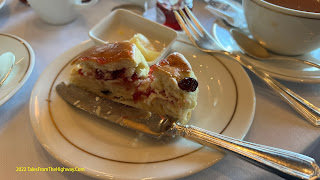 Well I think that is probably enough food porn.
Just reading this could add some pounds on you but I have to say that when we
got home I stepped apprehensively on the scale and had lost 4 lbs.
"The Queens Grill Diet".  I highly recommend it. 😀
One intersting thing this crossing was a group of "Vintage Dressers".
A group of people who enjoy dressing in clothes from all sorts of past periods.
They told me that they are found worldwide, but this group was from California
and numbered about 150 people.
Doing an Atlantic Crossing on a true (and the last) Ocean Liner was a great time
for them to get into the spirit of the past times. 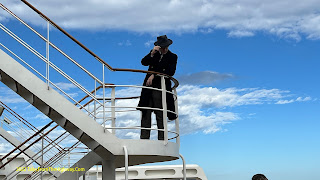 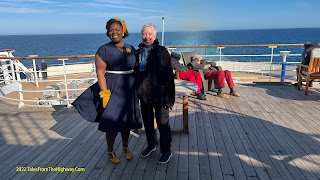 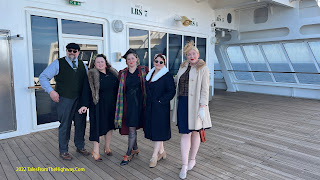 One of our favorite things to do on the ship, and even do-able by squeezing inbetween
kennel duty is the Aqua Therapy Spa.
A collection of Bubbling pools, hot tubs, steam and sauna rooms.
I dont take any pictures in there since its a bit private, but a link to an
article about the place can give you a good idea.
QM2 Aqua Therapy Spa
After a rough time in the spa, we retire to the relaxation room to chill for a bit.
There is so much to do on the ship.
The list would require a whole blog post to cover it all.
Each day the daily program is delivered and is several pages long with things to do.
One of the things we did was to attend a show in the Planetarium.
Yes - I did say Planetarium.   The Queen Mary2 has one!
Our great circle route to NYC was adjusted northerly due to a storm to our south.
The route was changed to a great circle course destination to a position about 20 miles south
of Cape Race Newfoundland.
About our  3rd day we ran into the edges of the storm and the winds built to force 8
and the seas to 7 meters. 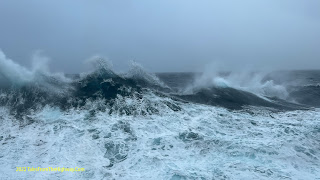 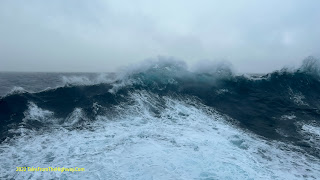 The ship of course handled this fine but it did increase the motion some/
Mostly it was the bow lifting and dropping and on a particularly big wave you
could feel the ship shudder as it plunged thru the waves.
Twas very cool but many of the folks on board disappeared and the QG restaurant was only about
1/3 full one evening.  The staff told us many were feeling a bit under the weather.
The wind and seas lasted about 36hrs or so but soon the wind and seas subsided
and the morning dawned calm with the promise of good weather. 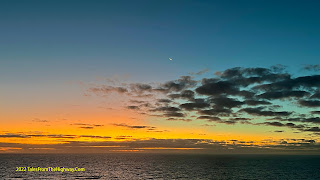 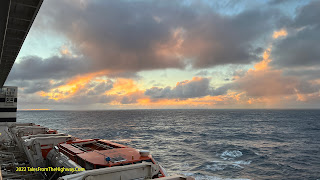 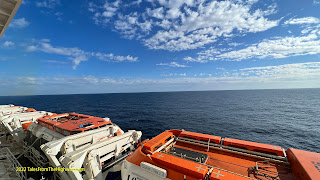 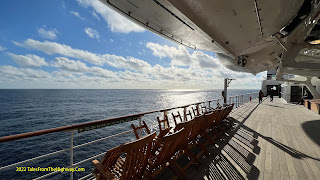 We really only had one day of great weather like this.
The rest of the time it was either cloudy, rain showers, wind etc.
But on the North Atlantic in late October one has to expect this.
I cannot complete this post without a mention of the great folks who attended to our every need.
At dinner we had a wait staff of 7 people who took care of us every night.
Seby, from India, was our main waiter and was just delightful.
We will see him in April and September. 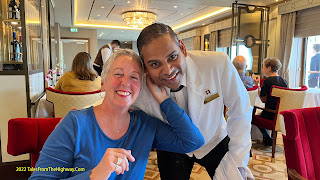 Nikola, from Serbia, was our Sommelier.
We had a lot of laughs with him and will see him in Sept. 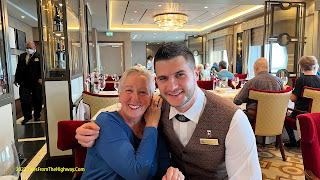 Vinray from the Philippines was one of our 2 assistant waiters 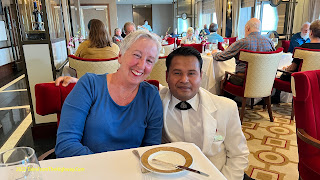 The day before arrival, crossing the Grand Banks, it was extremely foggy and at times
we could not see one end of the ship.
Our arrival in NYC is normally quite dramatic.
The lights of the city and the Verrazzano-Narrows Bridge and then the statue of liberty...
Our arrival to NY however was again pea soup fog and passing under the bridge, you were not
even able to see it.    So I went back to bed.
Arriving in Brooklyn, we were off the ship, thru customs, and back on solid
ground by 0845.   Our limo arrived and by about 930 we were at LaGuardia
waiting for our 2pm flight in the United Club.
Our flight crew to Denver was great!
We were seated in row 1 so we had time to chat with the flight crew when things
slowed down a bit.
Then while waiting for our flight to Tucson I saw the same flight crew
getting on our plane so when we got on board it was a sort of welcome home.
Kate and I immediately went to sleep and woke up when they turned on the lights for arrival.
Getting off the plane our FA kidded with us saying:
"Next time perhaps you two wont be so needy".
Our friend Kelsey picked us up at the curb and by 930p we were back at
the Cactus Ranch and this trip was history.
I would also be amiss if I did not mention our gratitude to friends Kelsey and Morgan
who took time off from work and traveled to Tuscon to dog sit the Doodles for us.
Without them - this trip would not have taken place.
Thanks Ladies!
So that gave you a quick snapshot of what a crossing is like on the QM2.
Its a beautiful ship and even though it carries over 2,000 passengers, its so large
that you never are crowded, and often can find a place all to your own.
And now....  only 164 days till we get back on board and head to
the UK and Ireland for summer 2023
Between then and now we have some winter RV'ing to do so we should not be
radio silent for very long.
Hope you enjoyed riding along.
Posted by GregK at 10:18 PM