Well we have had a great run of fantastic London weather.
The forecast prior to our departure was indicating rain all week but instead we have been
presented with mostly sunshine or clouds but only the lightest of drops here and there.
Monday morning turned out to be another great day for our trip to Windsor.
I purchased our train tickets online with "anytime" fare so that we would not be locked
into a specific train and instead would be free to wander at will and take the train
when it worked for us.
First - the short walk to the Piccadilly Tube station. That took us to Paddington Station, a combined underground and rail facility, where we
transferred to the Great Northern Railway. 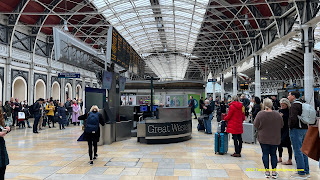 Our train flew to our next stop where we transferred to a second train to take us to
the Windsor & Eton Central Station. 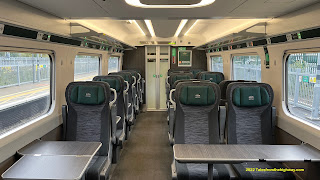 The Windsor & Eton Central Station was built in 1849, which allowed the Royals to travel
by train from London to Windsor Castle.
First, and unimpressive facility, it was completely rebuilt by 1897 in time for
Queen Victoria's Diamond Jubilee.
The massive facility was designed to look like Paddington Station.
Since those times as rail travel decreased, so did the size of the station.
Today the station is a fraction of its former size, the remainder having been redeveloped
into a retail mall. 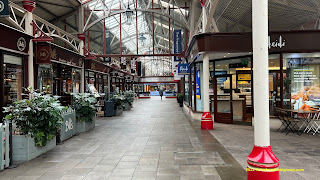 There are 2 stations in Windsor.
The other - Riverside - is at the bottom of a big hill where you will have to huff and puff
your way to the top.
The trains run direct to Riverside - but to skip the hill - choose E&WC Station.
This way when you step out of the retail section of the station you are greeted by the castle. 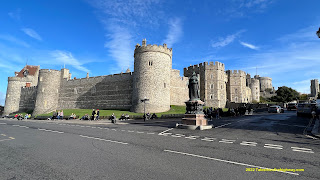 Our ticket was for noon and once inside we picked our audio guides and
went in search of the king. 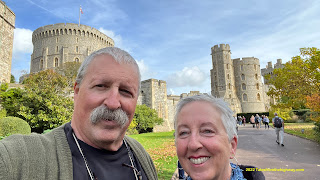 Unfortunately no photos are allowed inside of the castle so you will need to come on
over and see it for yourself.
Let's just say it is opulent and leave it that. 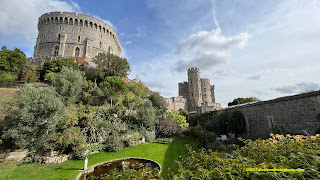 Beautiful grounds "fit for a King" 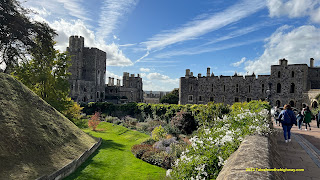 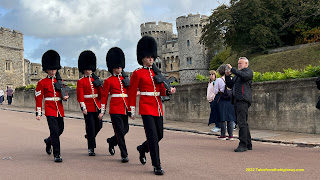 You are limited to a small part of the castle - still a lot of ground - but much of
it I assumed is reserved for the Royals.
Next - we toured St Georges Chapel.
This is where the funeral for Queen Elizabeth took place and we recognized it from
when we watched it on TV. 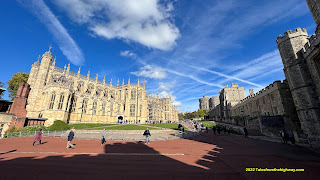 We also saw her grave marker but again no photos so I included on from the news services. 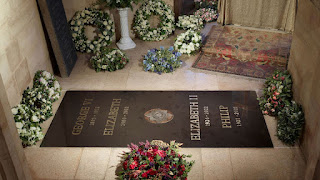 We also saw many other Kings & Queens Graves, for us the most notable being
King Henry VIII
Buried along with Henry was Jayne Seymour his third wife and the only one to give
him a male heir.
Re discovery of his grave during mausoleum construction turned up two surprises:
The skeleton of Charles I (with head separated from his body since he was beheaded)
A small child who was the stillborn child of Ann Boleyn
Here is an interesting story with more details about how the 4 came to rest together
Touring the castle - we really only get to see a tiny portion of the entire place, but
that small taste is enough to tell me that I could not afford the mortgage.
Now being 3pm it was TEA TIME 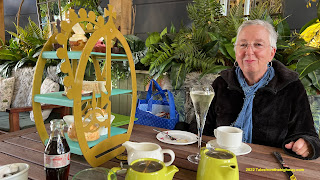 I had read about a decent tea at the Castle Hotel in town, so we gave it a try
and we were not disappointed.
After Tea, it was time to head back to the train and London. 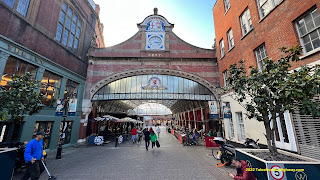 Leaving Windsor you get a decent view of the whole castle off in the distance. 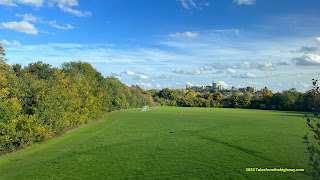 We never did get to walk the expansive grounds outside of the castle, so that means
we have more to do next spring when we'll be back.
That pretty much wrapped up our quick 5 nights in London.
Our next stop was Southampton and the QM2.

Another great weather day and our limo picked us up on the square right on time.
We chatted with the driver non-stop and before you know it we had traveled
the 2hrs from London to Southampton in a blink.
We had priority boarding and breezed thru the various checks and was on the ship
by 1pm.   We accomplished a few post boarding chores (getting spa reservations etc)
and then went down for a quick lunch. 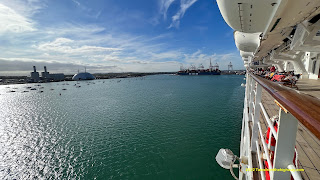 The main lobby on the ship. 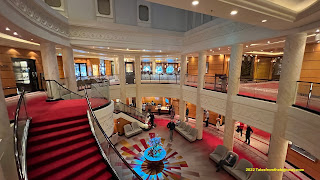 Our room # 9050.
Queens Grill is comparable to first class.
Our stateroom is bigger than most but not the biggest. 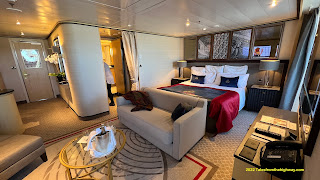 Well I'm rusing to complete this as we sail down the Solent towards
the English Channel.
Dinner is calling so that all for now.
Unless I get energetic - the next post may originate from Arizona
See you on the other side of the pond.