Into the Storms - California here we come

Well the holidays have passed, and winter is upon us, so that means its past time to be back on the road and meeting up with our friends.

It's been a bit wetter than normal so far this season in Az but I was able to squeeze in a quick bus washing and loading in between the storms.

Departure was on New Years day.   No sooner than I was done hooking up the truck behind the bus, and the rain started.   Heading up I-10 towards Phoenix and of course the rain messed up my brand new wash and wax job.

About 2 hrs into the drive the sky started to clear and by the time we got to Quartzsite it was a pretty nice day.    We spent the night about 2 miles north of town in the Hi-Jolly BLM area. 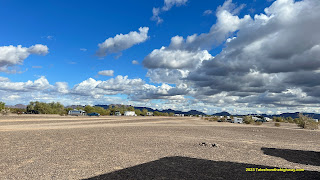 The next morning - January 2nd, the weather gods were still cooperative as we headed west towards our destination for the next few nights - Huntington Beach, Ca.

By the time we reached the coast, the clouds had settled back in for what so far this trip has been the usual type of weather. 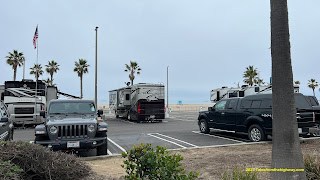 We have a great view from the window.   In the summer this is a beach parking lot and in the winter it is lined off with spaces for RV's.  50A hookups with water at each spot.   A dump station is on site. 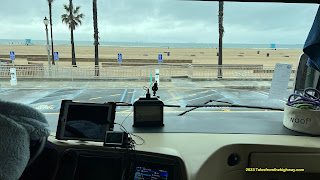 Good friends of ours, Ken & Catherine live nearby and we specifically came here to visit with them.   On day one, while Kate was visiting with her friend from College I went to a great out of the way Mexican place for lunch with them. 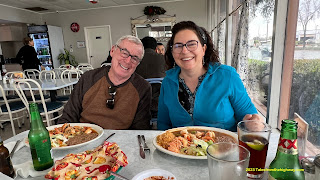 I had this awesome plate of Prawns, stuffed with sausage, and wrapped in bacon.  In addition there was some real fresh salads with the dish.    A nice twist.  One of the best Mexican lunches I've had.   Colima Mexican & Seafood Restaurant in Santa Anna was the name of the place if you find yourself in this neck of the woods.

We spent 3 mostly rainy days in Huntington Beach before heading north on Thursday.  Our next destination is the North Campground at Pismo Beach State Park.
True to form it was mostly a rainy drive but about an hour short of our destination, the sun came out and gave us a sunny arrival.  The leftover flooding gave indication of the past (and soon to be) weather.

We hooked up with our friends Rob & Pat from BC and Kevin & Bobbie from Ca.   We all took advantage of the sunshine to get out and about. 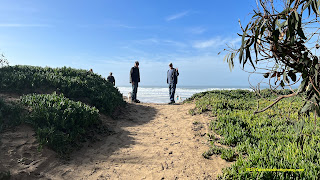 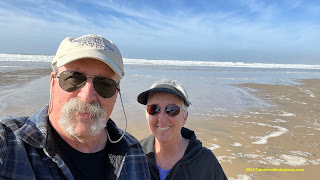 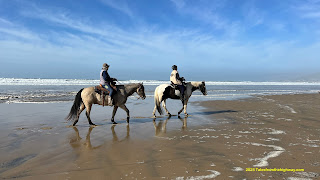 A prolific succulent found all over the coast - the Ice Plant - must really be something when all the flowers are blooming at once. 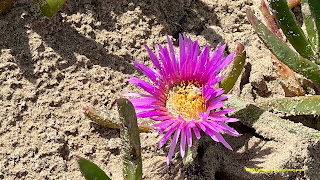 Kate, Pat, and Bobbie held a meeting on a nice perch above the beach. 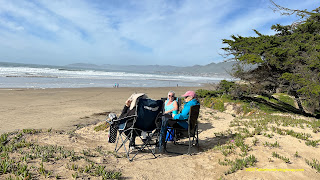 Part of this State Park is a Monarch Butterfly preserve.   The butterflies migrate hundreds of miles in the spring returning to the coast for the winter. 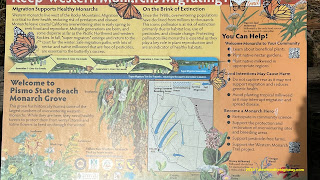 In the grove you could spot masses of Monarchs all huddled together.   It was cooler and cloudy at the time so they were waiting for it to warm up a bit.    At times the air is filled with thousands of the colorful butterflies. 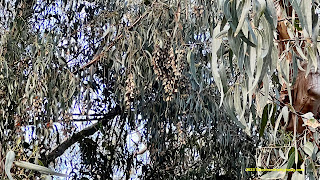 We also took advantage of the dry weather to walk the boardwalk along the dunes. 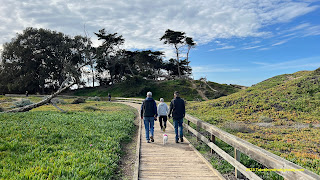 The dune system here is much deeper than the ones that I am used to along the east coast. 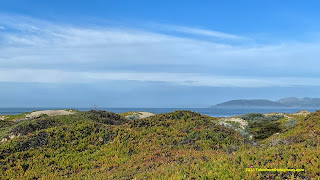 Soon enough, the next weather system moved in with heavy wind and more rain.  It rained for 2 days, at times really coming down in buckets.   The ranger knocked on our door in the morning to let us know that we might have to evacuate the park.    Later that afternoon, as the rains came even heavier, another knock on the door told us it was time to pack up.    The ranger said to move down to the Oceano Campground, part of this state park, where the rangers there would be expecting us and find us a site to hole up in

It turned out that a stream running in front of the campground had crested its banks and threatening to trap us inside the campground.   The ranger said it was time to leave.   So a rush to pack up and get relocated, and then there was s short line to get into the next campground. 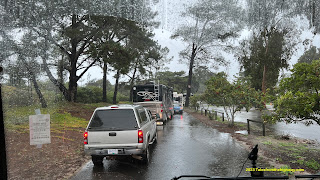 Our new location.  It was more flooded than the last, but allowed for escape if needed.  You can see the bus in the far right of the photo. 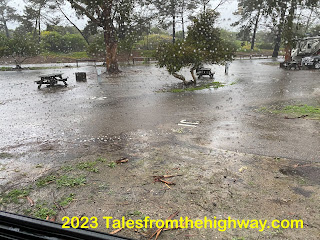 Lucy put on her raingear to weather the storm.   Does this face say "humiliation"? 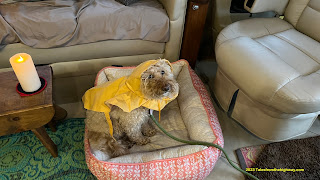 At times the rain was so hard it was like we were being pressure washed.   Then about 5pm last night it stopped.   So for the last 24 hrs we've had a bit of a respite.   Kate and I took a walk over the dunes to check out the waves.   Unfortunately, as soon as we reached the beach it turned dark and started to sprinkle. 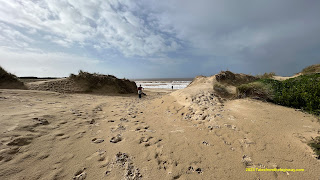 This is our new location.   It has dried out a bit and we keep an anxious eye on the sky. 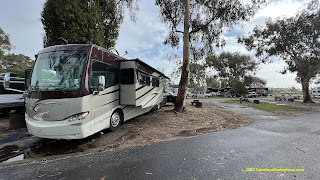 We are here till Thursday at which point we'll move to the Orange Grove RV Park in Bakersfield for 2 nights.  It will give us a chance to pick some of the best Oranges that you will find on the planet.

Travel buddy Rob took this video of the campground that we were in the day after we evacuated.   Our spots were in the distance about the middle of the video.   Our picnic tables were pretty much completely underwater.
Then - to add insult to injury - while parked here at the new campground, I noticed a squirrel getting too cozy with my truck.   Long story short is that it got under the hood and now my truck will not start.   It will turn over, but you can tell the plugs are not sparking.    Chewed wires??    Rob has a code reader so we checked the codes the truck was throwing off and they were all sorts of ECM (Electronic Control Module ie: Computer) errors so we'll see what this new adventure brings forth.
As long as I can get the transfer case into neutral, the plan is to pull it to Bakersfield (our next destination)  tomorrow where I made an appointment at an auto shop for diagnosis.   The Ford dealer there is currently taking appointments 5 weeks out and suggested this place so fingers crossed.   My friend Ron had rodent damage to his Toyota a few years back and wound up with his vehicle being totalled.   The wiring damage alone was over $14k!
A side note:   I had some suggestions about changing the justification of the print on the page.  It might make the blog easier to read on mobile devices.   I have to admit that it was hard to read on small devices.
Hopefully this left justification will be better.   Let me know what you think.
So if the wheels keep turning and the creek don't rise, we'll see you in a bit.