Bruges Belgium to the UK

After a wonderful time in the Netherlands we hit the road to another
European Jewell of a city -  Bruges, Belgium.

Distinguished by its Medieval buildings, cobbled streets, and numerous canals,
no trip thru the low countries would be complete without a stop in this beautiful city.

The vet was only about 800 meters from the house so it was a short 7 minute
walk to get there.

The Tapeworm treatment must be done between 24 and 120 hours prior to entry.
A quick pill wrapped in a treat and voila'
72 hrs prior to our entry - the Doodles had the treatment entered into their
Pet Passports and we were good to go. 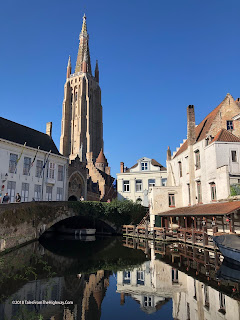 Beautiful as it is - Bruges suffers as a result of that beauty in the form of an insane
tourist population.  During the day the streets are packed!

Since our house was right in the center of the old city however, once the tours busses
departed with their loads of human cargo - the streets became real quiet
and we were able to enjoy a different side of the city. 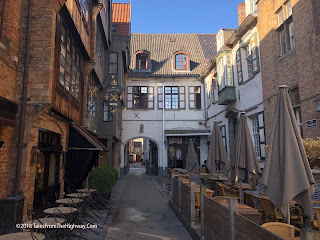 Early morning was another time to enjoy the sights.
Before the canal boats start plying the canals, the reflections of the
buildings on the water was magical. 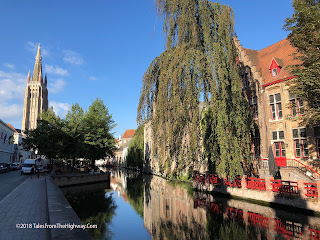 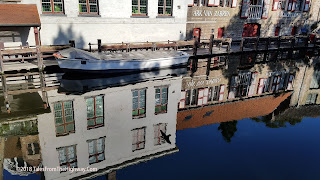 Below is the most photographed view of Bruges.
Our apartment is part of this view.
Located directly below the church tower on the right,
and above the green plants on the wall 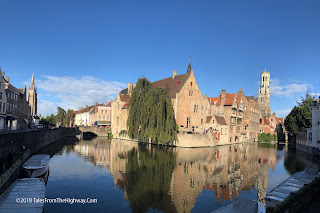 There are several squares in town.
Below - the Burg Square is the earliest inhabited place in the city with
settlers first inhabiting this place in 2nd and 3rd centuries. 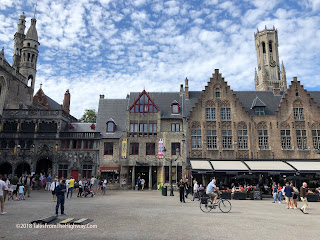 The Market Square, in the shadow of the majestic belfry tower,
was the scene of medieval festivals, fairs, tournaments, uprisings and executions.

Today it is used for markets, concerts, and social events. 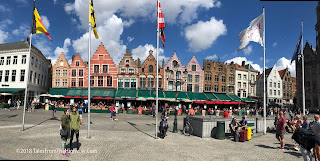 No trip to Bruges would be complete without a visit to one or more of the dozens
of Waffle and Chocolate shops thru out the old town.

Belgium is noted for its Waffles and the quality of its Chocolate and Bruges is
certainly a place where one can indulge and enjoy.

Our apartment was right behind a waffle shop!
Our front door opened onto the waffle shop courtyard patio.

One day we had desert waffles around 2 pm,
and on Sunday prior to our departure we had brunch waffles.
Kate had one with powdered sugar.
I had a BLT waffle with an egg!

Basically - step out our door, and sit down for waffles!

Step a few feet further and its Chocolate City!

There were 5 or 6 chocolate shops right outside our door along the street.
The fancy types of Chocolates with fillings are called Pralines.

A few doors down from us was one of the finest shops in Bruges, and
we stopped to pick up some home made chocolates as we were running low
on our Swiss supply.

Our tasting and sampling complete...
Our Medieval sightseeing finished...
It was finally time to waddle out of town and head to Calais.

Calais was our final stop on the Continent and was where we would stage for our trip back to the
UK and the final portion of this adventure.

Only about a 90 minute Sunday drive and we found ourselves at the Holiday Inn
in Coquilles/Calais France.

I had booked a mini suite so we even had a pull out bed set up for the doodles! 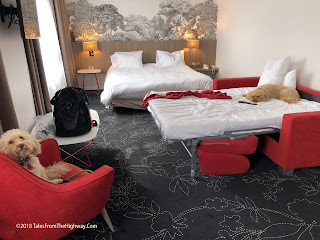 It was only about a 15 minute drive to where we would return our leased car.

Now that it is a used car they will sell it to a rental car company who will save a
boatload of sales taxes.   A win-win situation for both of us!

Our Folkestone Taxi was waiting for us - so we unloaded the Talisman, and loaded
the taxi, and in a few minutes we were on the way to the Chunnel for our train to England.

First we had to clear thru the UK Dog program which we did with no problems,
and a few minutes later we were driving onto the 1020 train to Dover.
We were 1 hour ahead of our schedule.

We drove off the train at the same time we boarded it.
The total trip with loading and unloading took about an hour and since the
clocks in the UK are an hour earlier than France....

The taxi dropped us off at Hertz Car Rental in Dover.
Unlike the Eurodrive program where you spec the car you will lease - this car
was a normal rental and you never know exactly what you are going to get.

I was worried that our car might not be large enough but I was pleasantly surprised.
My Audi A8 Avant (or equivalent) turned out to be the "or equivalent"

But the KIA Optima Sportwagon turned out to be even a bit larger than the Renault,
and the car was loaded with options as I expected so I was happy.

Never having driven a KIA I wrongly assumed that they were crap wagons, but
I was wrong.    This is a very nice and comfortable vehicle.

We'll have it for the next two months as we motor down the other side of the road thru the UK.

About a 3 hour drive from Dover took us to our next home for two nights.
This place was just supposed to be an overnight stop - but it turned out that I should have
booked a couple more nights as it was just what the doctor ordered.

After a couple of weeks in city locations, the peace and quiet (and grass) of the
English Countryside was a welcome respite.

Located on the grounds of West Stowe Hall in Suffolk, our cottage was rustic,
comfortable, and well equipped for the 4 of us.

West Stowe Hall dates back to the 1500's and is a typical Manor house of the period.
Here the Nobleman would live have dominion over his commoners.

One great part of this stop was that our friends Mark and Karen (and Barney the dog)
came to visit us and stayed at a hotel a few miles away.

Mark and Karen are from England and we met on the QM2 on the way over.
Just like in the RV world, on the QM2 (especially the kennels) you meet
people who are living a sort of parallel type of life and often the connections
are instantaneous.

We stopped in Bury St Edmunds a nearby town to replenish our dog food supply and then
set about terrorizing the English Countryside.

First stop was Lavenham.
I think the men who built this town were all drunks!  LOL

It is noted for its abundance of 15th-century half-timbered medieval cottages.

In the medieval period it was among the 20 wealthiest settlements in England
due to its prominence in the wool trade.
It was so wealthy that in 1487 Henry VII fined several families for displaying too
much wealth.

Lavenham however was a boom / bust scenario and as quickly at the money came - it went.

The boom ended with the arrival of Dutch settlers in nearby Colchester
who made lighter wool cloth at a lower price point and took over the wool trade.

It is due to the sudden decline of this wealth, that future generations did not
have the money to modernize the buildings and thus the great assortment of original
medieval buildings that remain unchanged to this day.

The houses are all so crooked because due to the rapid growth of the town, they had
to use green uncured wood.    As the wood beams dried, they curled and twisted.

Then when the town went bust - no one had the money to fix the houses so there they
stand to this day.

The crooked, unique look of the homes has not gone unnoticed
by the movie business either.
The streets of Lavenham were used as a background for the scenes in
Godric’s Hollow in the film Harry Potter and the Deathly Hallows Part 1.

The buildings were filmed and then had their appearance altered using
CGI (Computer-Generated Imagery) so the actors could be shot separately in a studio
and then superimposed onto the background.

Being in England - it was time to wet our whistles with a pint
and no better place to do it than at a local Pub.

Unlike Bars in the US.... Pubs are really great places.

Civilized, clean, light, respectable.
Often the center of town life...
they are not the seedy dark places that are many US bars.


And - unlike US bars, they welcome dogs, and you would not be afraid to let
your dog lay on the floor in a pub.

Lavenham was the site of a US Army Airfield during WW2 and the pubs in the area are
known for the amount of US Soldier memoribilia on the walls.
There were walls of Unit insignia, rank insignia, and notes scribbled from GI's/ 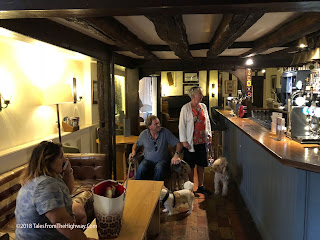 After a nice cool pint - we headed off for some lunch at a local tea room.

Then we jumped back into the car for our next stop.

Constructed in the 1500's by the Abbots of Bury St. Edmunds,
it passed to the crown during the reign of Henry VIII when
he abolished the monasteries. 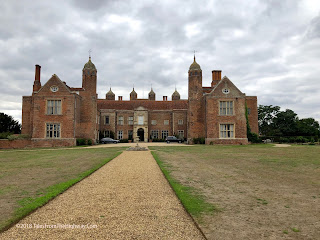 Constructed between 1467 - 1497, a church has been located on this site
since the 9th century.

Having survived much of the damage related to the religious upheavals of the
16th and 17th centuries, plus its cathedral like qualities:
(longest Nave of any Parish Church in the UK)  it is regarded as one of the best preserved
specimens of its type ands period. 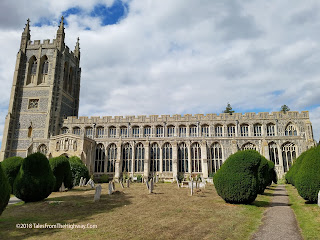 Sir William Clopton - buried in the chapel was a wealthy local noble who in 1439
made a gift of land and rented out a building to the town.

The rent was one red rose - in perpetuity.

So each year - the town still lays one red rose on his sarcophagus.
It is believed to be the longest standing lease in the UK

Meanwhile we keep saying how dog friendly it is over here....

Visiting the church, the caretaker told us that not only were dogs allowed in the church
but that they were welcome!

How dog friendly is that! 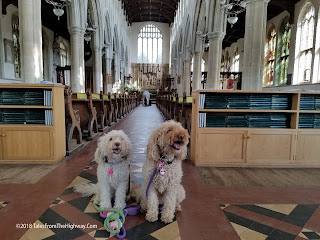 Well after 2 nights (1 full day) we had to say good bye to Suffolk and continue
our journey north as we have appointments to keep in Scotland.

We are now on a beautiful farm about 30 miles from Edinburgh and will be here for a week.
Tomorrow night we go to the Edinburgh Tattoo which should be a high point of
a trip that has been filled with highlights.

All this and more in the next blog.

I'll leave you with one last thing....

While we are keeping the wheels turning, the house in Tucson is taking shape. 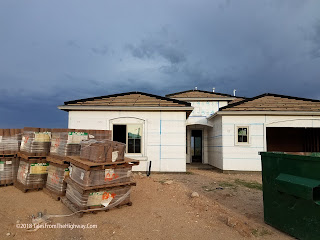 Outside its ready for stucco and roof tile.
Inside they are starting insulation and sheetrock next week.