Hello there Lads and Lassies!
We are now in Bonnie Scotland and bonnie it tis!

After leaving West Stowe Hall, we traveled up thru the middle of England,
crossed into Scotland and settled for a week at a wonderful cottage in the Scottish
countryside about 20 miles southwest of Edinburgh.

After that week, we've now moved further north to Ballachulish
(Balla Who Lish)
in the Highlands of Scotland.

Our trip to get here is shown on the map below.

Entering Scotland the first geographic area we enter is the southern uplands, a hilly area that
contrasts quite dramatically with the flat or rolling English Countryside that we had been
driving thru for several hours.

About 30 miles or so further north the hills moderate into the rolling countryside of the
Scottish lowlands.   These two areas occupy the lower 1/3 of Scotland and contain most of the population.

Our drive was georgeous, and we passed some really idyllic country homes.

Soon we arrived at our home for the next week in Dolphinton, Scotland.

A cozy stone cottage with walls that were about 2' thick,  we were greeted by our
hosts who turned out to be the most interesting and wonderful people.

Our hosts had the most amazing life stories and we spent many hours enjoying our visit
with them and hearing of their interesting exploits.

Surrounded by sheep farms it was a peaceful place to spend the week. 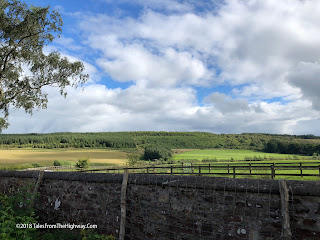 It had this heavy metal stove powered by heating oil.  It had two ovens, and a cooktop.
You had to turn it on and let it heat up.
It also provided heat for the house.   They are quite common here. 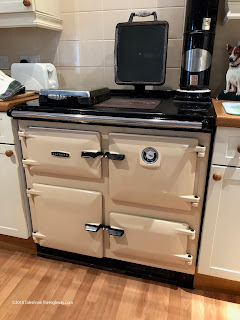 Here you see the cooktop.  Just a large flat metal plate that you place the pots on.
Different areas of the cooktop are different temps so you have to learn where the hot and cool
spots are located but once you do they are quite easy to use.

We had a great back yard and the dogs just had the best time running around in the lush grass. 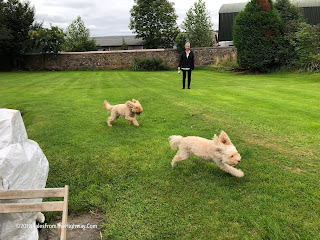 There were a pair of miniature shetland ponies, a Jack Russel Terrier, and some chickens
roaming about as well so there were plenty of diversions for the pups.

On Sunday our hosts invited us to the local Church of Scotland service in the village.
It was in an old stone church and a small congregation of about 20 people.
Houseguests of theirs from Sweden were also going and it was promised that
it would be interesting and fun.

The photo below - our hosts are on the right, and yellow sweater next to Kate.


As visitors from the US we were warmly welcomed by everyone in the congregation.
One of the Swedish guests played Amazing Grace on the Organ
(Amazing Grace was written in swedem)

Our whole trip was planned around being in Edinburgh during the middle of August so
that we could attend The Royal Edinburgh Military Tattoo
and the Edinburgh Festival Fringe - both of which run all month.

Tickets for the Tattoo can be difficult to obtain so I had a reminder in my calendar to
pop up when they first went on sale last December.

I opted to go all out and get one of the special packages which included dinner at
the Cannonball Resturant right next to the castle, a private performance by Tattoo Cast members,
followed by an escort to our premium seats avoiding the long que to get in.

We left the house about 3pm for our 5 pm dinner.
The plan was to have some time to walk around before dinner.
I had installed the Lothian Bus App on my phone and had e-tickets so we were all set

We arrived at the Park & Ride just a minute before the #47 bus.   We hopped on the bus
and with hardly a wasted step we were on our way to the city center.

After a couple of minutes on the bus - it dawned on me that I left our Tattoo Tickets on
the console in the car and that we needed them to get thru security.

So we had to jump off the bus at the next stop - quickly walk back 2 miles to the car
(in the rain that had now started)
My bus app showed that if we hurried  - we could get the tickets, catch the #37 bus, and
still be in time for our dinner reservations.

So - we retrieved the tickets,
just made the #37 bus,
got off the bus at the proper stop,
walked 15 minutes to the Cannonball restaurant,
and arrived with 10 minutes to spare.

Its nice when a plan B comes together!

Our dinner consisted of Smoked Salmon,
Fried Haggis Balls,
Highland Venison,
followed by a Scottish Double Cream Raspberry and Pistachio Poisset desert
topped of with a dram of a fine Scottish Single Malt.

During dinner we were entertained by performers from the upcoming Tattoo. 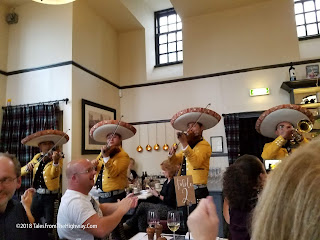 After dinner we were escorted to our seats and settled in for the 100 minute performance that
operated with military precision and timing.

The dramatic backdrop of Edinburgh Castle looms over the Esplanade as the
performance beings right on time. 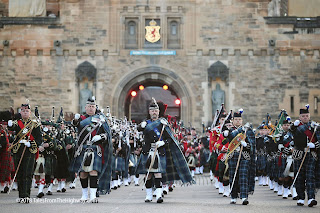 The performers were a mixture of Military Bands, Pipers, and civilian performers from
countries from all over the world.

Some of the performances included:

The Central Band of the Czech Armed Forces,
one of the best military band ensembles in the world.

The Jaquares Marching Band from Mexico 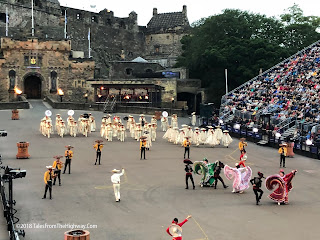 The Tattoo Dancers
Accompanied by bagpipes and bands. 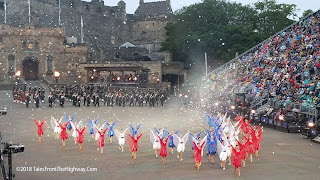 And  - some of the Revolutionaries returning to the mother country...
The Middlesex County Volunteers from the US 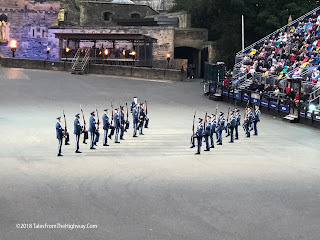 Towards the end of the show - a fireworks display while the show continues. 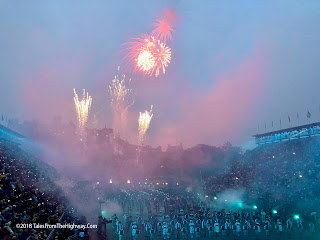 Finally, the entire cast assembles for the grand finale and the march out of the esplanade.
Last off of the field was the massed pipes playing Scotland the Brave and The Black Bear.
It was truly a dramatic exit and fitting cap off to an amazing night.

I've put together a short video of the pipes marching out to give you just a taste.


After the Tattoo, we took the bus back to the park and ride, picked up the car and
by midnight were back home to our cozy cottage.

The next day we were back in Edinburgh to visit the rest of the attractions.
Since August is the Festival Fringe - there is much going on in the old city.
The fringe defies easy description.  Its an eclectic art festival - but more.

They describe it as follows:

"The Edinburgh Festival Fringe is the single biggest celebration of arts and culture on the planet.
Every August for three weeks the city of Edinburgh, Scotland’s capital, welcomes an explosion of creative energy from around the globe.

With 53,232 performances of 3,398 shows in 300 venues in 2017
there are quite literally thousands of reasons to visit the Edinburgh Festival Fringe."

There are venues all over the city like the Gem Show in Tucson, but is related to the arts.
Street performers are on every corner and in-between.

We walked the Royal Mile, watched the street performers, visited many of the shops
and just enjoyed the fine sunny day. 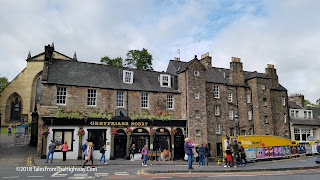 Later we walked back up the Royal Mile and visited Edinburgh Castle.


I had purchased my tickets on-line so we were able to avoid the long que for tickets.

There was much to see at the castle, which still serves as headquarters for some
Scottish Military Units.

We found the prisoner of war prison to be especially interesting.
Prisoners from the American War of Independence were held here. 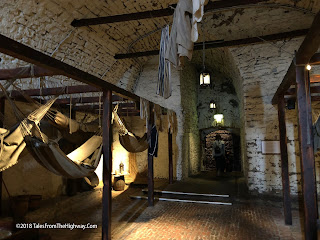 Of of the doors has a early depiction of an American Flag carved into the door.
(see it middle left just below the metal hasp) 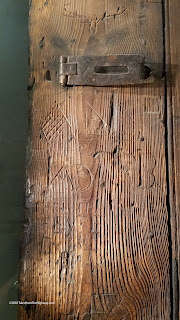 The castle sits on a volcanic hill and towers above the city and commands an impressive view
of the surrounding country side. 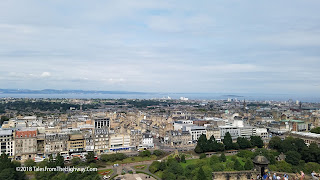 After the castle - we headed back for the bus but first stopped for a late lunch/early supper.
What was on the menu???

Haggis balls in a consume on a bed of mashed potatoes.

Another day we took an hour drive to the east coast south of Edinburgh to the town of Dunbar.

Besides being the birthplace of John Muir - the father of the US National Park system, it
also it the home of the Bellhaven Smokehouse.

We then went into town to visit the ruins of Dunbar Castle which sits at the harbor.

Once one of the most formidable castles in the UK, it was ordered destroyed in 1567
by the parliament of Scotland in response to a rebellion

Part of the castle was lost when the second harbor at Dunbar (below) was built.
An interesting local fact.  John Paul Jones, the father of the US Navy was born in Scotland.
During the war for independence he raided shipping up and down Great Britain.
On time - supposedly for some slight in his past life in Scotland - Jone, while sailing
by Dunbar, ordered several cannon shots into the town.

After this "attack" on the town - the installed a 16 gun half moon battery to protect the town.
Since then - it has never fired a shot in anger. 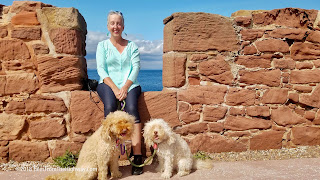 Well our week was up and it was time to say goodbye to our wonderful hosts,
and this peaceful location and head north to the Scottish Highlands.

It was only a 3 hour drive and we had some time to kill, so I found a self service dog wash
along our route in Glascow and stopped in to give the dogs a mid-trip scrubbing.

After a bit of the rub a dub dud we continued north.
Our route took us up the Bonnie Bonnie Banks of Loch Lomond.

Loch Lomond is made famous to us Yanks by the song
"You take the high road and I'll take the low road..."

We drove up beautiful route A82 thru Glen Coe to our next home for 4 nights in
Ballachulish on Loch Leven.

We'll use this place as our base for some quick explorations of the highlands.
I now wish I had also booked more time here in the highlands but we'll need to
save that for the next time.