Just when you think things can't possibly get any better they do!
Our time in the Highlands of Scotland have been just fantastic.

My plan for Scotland is the first mistake that we feel I made in planning this trip.
I should have planned more time....
Much more time....

But as P.T Barnum once said: "always leave them wanting more."

As I hinted at in our last post - our drive from the lowlands to the highlands was great.
Alternating between lakes, forests and moors, it never got routine or boring.

Heading north thru the Glencoe Valley, this area was used in the filming of Braveheart.
You can see that Autumn is already starting to paint the hillsides with splashes of color.

Our home in Ballachulish was fantastic.
All the amenities plus.
The house was the cleanest place I've ever stayed in.
It was soooo clean - one day I set out trying to find some dust.
On top of doors, pictures, windowsills.. you name it.
I could not find a speck of dust anywhere!
One of our new friends on the Queen Mary 2 warned us about the narrow roads in the UK,
and when we first arrived I saw what he meant.   The roads are really narrow and driving on the left
only complicates the matter.

But when we got out into the country side I really started to understand what he meant!
Many of the roads are barely wind enough for two cars to pass - and they have a 60 mph speed limit.

Many roads in the highlands are single track roads that have wider spots strategically placed.
These wider spots are called "passing places"

Prior to getting on these roads, I read up on the etiquette and rules about using these roads
so that when i found myself on one - I would not be a total rube.

It was good I learned the rules of the road before getting on them as you can see below.
(this road was much wider than some) 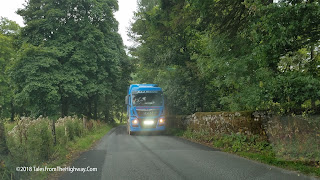 The Connel Bridge over Loch Etive
A one lane bridge controlled by a traffic light that alternates directions.
Just outside our door in Ballachulish was the beautiful Glen Coe.
One of the prettiest valleys in the Highlands.
Running off of the Glen Coe was the Gen Etive.
We took a dead end 1-track road up the valley and back.
Another side trip took us to Kilchurn Castle.
Built in the 15th Century it served as the ancestral home of the Campbells of Glenorchy
who dominated the Central Highlands for over 2 centuries.
Now owned by Historic Environment Scotland, it is free to visit.

We also got up close and personal with a Highland Cattle.
These hairy critters produce exceptional beef and are well suited for the extreme conditions here.
This hairy lass did not take a great liking to Gracie however and tried to give her "the horn"

One night we went to the local pub in Ballachulish - The Laroch Resturant & Bar.
The chef is Michelin Starred and the food was out of this world.
Our total bill was about £50 and that included a couple of pints of Guiness!

Our 4 nightsand 3 days passed by all to quickly and it was time to move south
to our next home in Eyemouth, Scottish Borders.

We had made two big circle trips from our home base in Ballachulish.
One to the west and one to the east.
One day was a couch potato day and long long work day for me.

We are glossing over most of what we did here in the interest of brevity and
simply because the short time that we were here was not enough to try
and give you a fair taste of what this place is about.

The Highlands remind me much of Alaska... with more people and better Scotch.

It was a gloomy wet day as we motored our way south, but I still had a surprise for the day.

A visit to Doune Castle just a short detour off of our route.

Outlander was filmed at Doane Castle, and parts of the castle were recreated in
a studio set where filming on site would have been too destructive.

Kate is a big fan out the book and series so it was a special treat for her.

Here is an aerial view of the castle.

Approaching the castle from the parking lot.

Owned by Historic Environment Scotland, there was a small entrance fee which included
an audio guide that we listed to as we roamed about the castle.

Below you can see the enormous size of the kitchen fireplace.
It was over 17' across and could roast an entire Oxen.
On either side were ovens for baking bread.
Kate can stand inside the firebox without any problems.
One wall of the kitchen has these pass-thrus where food was passed to the servants
who ran it across the corridor to the Great Hall where the banquets would take place.

Below the Great Hall where guests would feast on said Oxen.
At one end of the hall was discretely placed latrines where guests could take care of
what ever business was necessary in order to get back to feasting in minimum time.

Upstairs in a separate part of the castle was the Lords Hall where
Medieval Justice would be dispensed.

Do I need to comment on the photo below?
She made me do it! 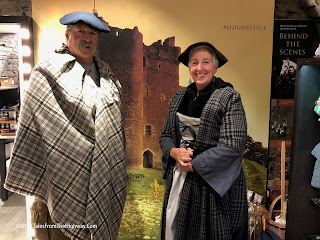 Around 4pm we were rolling into our new digs for just two nights.
A comfortable loft on a farm outside of Eyemouth Scotland.
We were only a few miles from the English Border.
Next to our loft was a Goose Farm.
Today a Goose...
Soon - Christmas Dinner.

Our loft at Alemill - Eyemouth, Scotland.
Compact, but cozy, clean and quiet.

The gentleman renting the flat below us was from Germany who's hobby was metal detection.
Working with a permit from the UK he takes a scientific approach to his work.
He comes to our flat every year, several times a year, for weeks at a time.

We saw him go out in the am and later that night he came home and seemed excited.
It turned out he had found a coin from the 1300's.
He showed us his other finds on this trip which included medieval buttons,
as well as artifacts from the Romans.

He meticulously documents locations, numbers and bags everything and then turns it all
into a museum near his home in Hamburg.

On
On Monday (Aug 27) we went into Eyemouth to visit the harbor.
Famous for his harbor seals, visitors toss fish for them to feed.

Tuesday the 28th we had to move on to Morpeth, England.
It was only a short hour drive away and we could not get in till 4 pm
so I had some side trips planned.

The first was to Berwick Upon Tweed, the northernmost town in England.

An historic town located upon the River Tweed, due to its strategic location and proximity to
Scotland it has seen its share of warfare, and changed hands between the two countries over a
dozen times in his history.

It has safely been in English hands however since 1482

Below, the Royal Border Bridge carries rail traffic over the River Tweed as it has since 1850.

The walls completely encircle the town center and we walked about 3/4 of the ramparts.
Leaving Berwick upon Tweed we then visited two castles on the way to our
next home away from home... another castle.

Over all it was a very pleasant day of outings but those castles and more are
going to have to wait till our next post.

Before we go however - here is a teaser for our next time.

We are currently staying the the castle shown below.
It is the first of several more to come!

It is the real deal, built in 1340.
Famous inhabitants included Margaret Tudor, the sister of Henry VIII,
who stayed here in 1513 after the death of her husband James IV, King of Scotland.

We have the castle and grounds all to ourselves.

Then after this castle, we move on to another that figures prominently
into the life and times of Henry VIII and Cardinal Wolsey.

We'll have that castle to ourselves as well.

Below, our home...  Morpeth Castle.