We are in Gaffney
The Peach Capital of South Carolina. 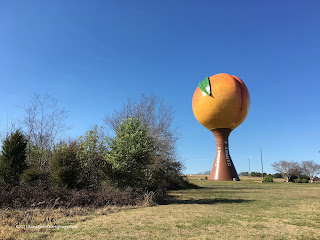 Our current home since Tuesday - The Freightliner Training & Service Center.

We are here for some routine maintenance - a  48month service.

We arrived a few days prior to our appointment hoping that we could be worked
in early, but this is a busy time of year so we had to wait for our Friday appointment.

This is the training center for Freightliner Custom Chassis Mechanics,
and the work done here is AAA+ and the price is also very reasonable, so passing
by - I try and get on the schedule to take advantage of a good thing.

While waiting for our turn in the service bay I decided to take Kate on the tour
of the plant where our Coach Chassis was built. 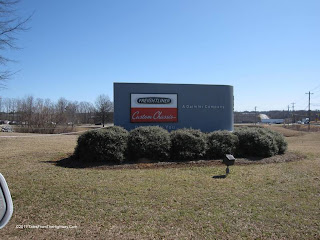 Inside the 200,000 ft² facility are 3 production lines.
One is devoted to UPS and Fedex truck chassis's
The second is a bus chassis line.
The 3rd is the RV Chassis line where they are custom assembled for many
RV Manufacturers.

After a short safety video we proceeded out onto the production floor.
You are immediately struck by the whir of constant motion,..
Shop vehicles of all types - some set up as multi car trains -rush about
delivering parts to the work stations up and down the line.

The parts arrive at the factory, and are delivered to the work stations,  just in time
to be mated with the proper frame

Traffic lights guide the traffic flow and yellow lines are laid out on the floors as walkways.

There was even driver-less vehicles.
This one whizzed by pulling 5 or 6 carts behind it.

In a corner of the facility - workers assembled the Cummins engines that go into some
of the chassis such as ours.  Turbos, alternators, electronics, etc are all added at this point,
and the engine is mated to the transmission.

This is a Cummins ISC engine similar to the one in ours mated to an Allison
6-speed transmission. 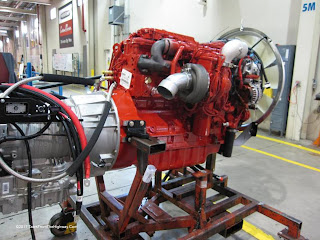 At the far end (beginning) of the line, frame sections are laid out upside down, cross members
are placed in position, and the whole assembly bolted together.

Further down the underside components such as axles are attached.
Below you see the rear axle assembly sitting on top of the rails. 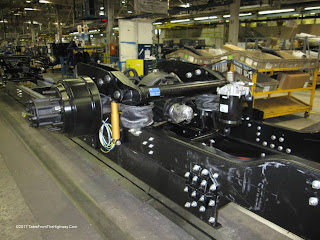 Down the line the frame travels, and once the bottom is complete, the whole chassis is
lifted, and flipped right side up.

In the photo below the chassis is now sitting on its own wheels and ready for
laser alignment.   After which the engine will be fired up and the chassis driven out of the plant. 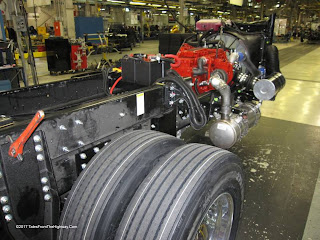 Just 52 minutes after the start of assembly - the new chassis is born! 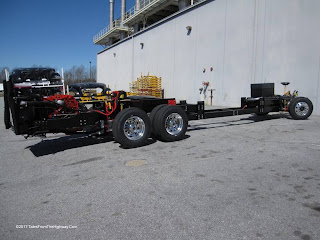 Seeing 600+ employees working in unison, the attention to quality control,
and the computer controls...  it was quite an experience. 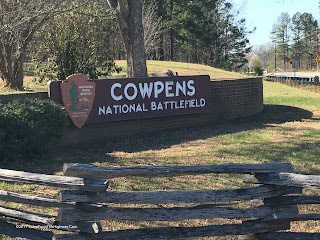 In January 1781 things had not been going well for the American Revolution.
The British had taken control of the south and its seaports.

In the interior however, bands of revolutionaries continued to harass those loyalists which
England had hoped would secure the region after the British troops had left.

Lord Cornwallis decided to put an end to these actions and dispatched an army
under the command of Lt. Colonel Banastre Tarleton to put it down.

If you saw the movie "The Patriot" - the cruel British General who was Mel Gibsons'
antagonist was based upon Colonel Tarleton.

Needless to say - it did not go well for the British.

The Americans, under the command of General Daniel Morgan - with Tarleton in hot
pursuit - positioned themselves with a river at their back and the right and left flanks protected
by thickets and swamps.

The Americans had no where to retreat.
Morgan did this by design as the volunteer militia which made up 2/3 of his army were
famous for scattering as soon as the lead started to fly.
The militia would have to fight or die.

Tarletons troops on the other hand arrived at the battlefield exhausted and
malnourished.   They had run out of food 48 hrs earlier and had been
marching at great haste over difficult terrain for days.

The terrain would force Tarleton into making a head on assault which is what Morgan wanted.

Morgan 150 of put his best sharpshooters in the first line, straddling the Green River Road.
Their orders were to shoot all the officers at the start of the battle which they did

Right behind them he conspicuously put the Militia with the instructions to shoot
2 volleys and then retreat to a pre determined position.

These instructions caused the British to think they were routing the militia and caused
them to break ranks as they chased the "retreating" forces.

Behind the militia however was surprise number one...   The Continental Regulars.

In essence - the British ran into stronger and better troops the further they proceeded.

The map below shows the troop positions at the start of the engagement. 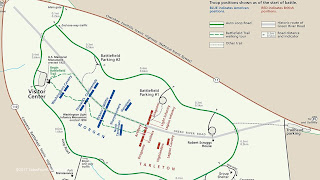 Eventually the calvary joined the fight, the sharpshooters and militia
appeared back out of the woods, and the British became encircled and started
surrendering en-mass.


In less than an hour the battle was over.
The Americans had surrounded and decimated the British army.

And these were Cornwallis's best and most elite troops!

Cornwallis was forced to abandon South Carolina and head north to Virginia and
his eventual defeat at Yorktown which ended the revolution resulting in
American Independence!  🇺🇸

The Battle of Cowpens is regarded as the turning point of the revolution.

We walked the battlefield loop, a pleasant 1 mile trail.
Part of it is along the Green River Rd.

Further down the Green River Rd is the Historic Scruggs Cabin.
It is inside the park - but built in 1828 - long after the battle fought here. 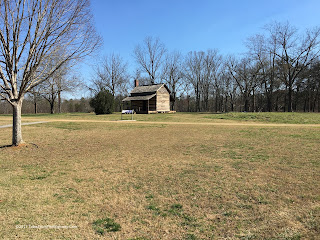 It is a classic example of an early homesteader homesite.
The Scruggs were busy rabbits and had 11 children.
Imagine 13 people living in this small home! 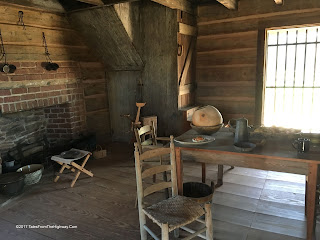 On Friday Morning we pulled in the slides at 8am and right on schedule,
the Freightliner Tech arrived to go over our work order.
A few minutes later he drove the bus into one of the bays and we walked up to the
customer lounge with the Doodles.

The Gaffney Service Center has a very nice lounge and is dog friendly.

While we waited I was able to get a few hours of work done and before we knew it,
the tech came in to say we were all done and gave the bus a clean bill of health. 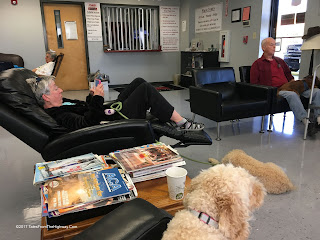 The timing was perfect.
It allowed us enough time to get 260 miles down the road and shave off a big chunk
of the drive to Red Bay on Friday - setting us up for an early Saturday arrival
at Tiffin Motorhomes Service Facility.

Tonight we are in Anniston Alabama at the RV Park owned by Dandy RV.
Its very convenient and has long pull-thrus so we do not need to unhook the toad.

Our plan was to get here before dark - and we would have arrived with plenty of
time to spare...  but Friday night Rush hour in Atlanta had a different idea.

A 4 hr trip became 5 1/2 hrs due to the horrendous traffic.
Its crazy..  I remember Atlanta being a nightmare at rush hour almost 40 years ago
when I drove Semis, and nothing has changed!

Well I told Kate when we left Gaffney that we would have to contend with Atlanta and we did!

Its all good though.  No sense getting worked up.
It was a pretty day and our space was waiting for us here in Anniston when we arrived
at 0 Dark 30.

Tomorrow we have an easy 3 hr drive to Red Bay in Saturday traffic.
Nice!

Along the way I plan to hit a cardlock fueling site to try out my new commercial fuel
card that I will use in Canada at Petro Canada Cardlocks.

More about that in the next post.
Time to chill.