We left you last in Las Vegas.
On Monday I picked up the custom brace for my knee and I am
pleased to say that while I was skeptical - it has made quite a difference.

I was on my feet all day yesterday and almost no pain.

Before we left Vegas I figured we'd bring the Doodles one more time to the pet wash.
I had never been there so I wanted it give it a try.

After the wash and dry - another brushing and combing.
Then I gave them another haircut.

This is before the haircut.
They are super soft and fluffy now. 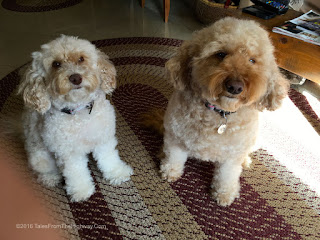 While in Vegas we took a day trip out to Lake Mead NRA and I picked up
my long anticipated Geezer Pass.   The lifetime Senior National Parks Pass.
So I guess I am officially a Geezer now. 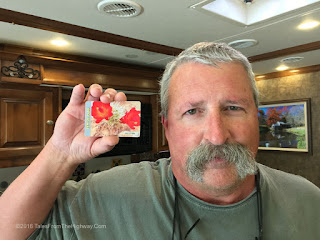 I'd also been having some trouble with the water softener all winter.
It was not providing as much - or as soft - a water as it had been previously.

I had suspected rust fouling of the resin bed, so I had been using rust out powder the last several
regens  in an attempt to clean the resin of the rust.

While it improved the softening a bit - it was still not acceptable so I finally  decided to
replace the resin with a new bag that I had purchased from the manufacturer.

As soon as I started to remove the old resin from the tank I knew it was a smart decision.

Below you can see the new resin on the left and the old on the right.

The resin was completely coated with Iron as you can see and is a dark amber color.
The new resin is a light gold color.

After replacing the resin the softener is back up to snuff.
I think going forward I shall use a spoonful of rust out each regen as a preventative. 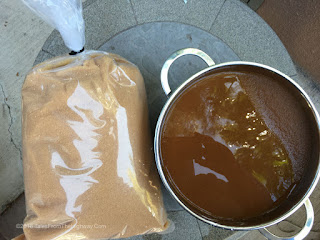 On Tuesday we packed up and headed back west to the Pacific coast.
Our destination was San Simeon State Park in Cambria, California.
We met Ron & Maxine here. 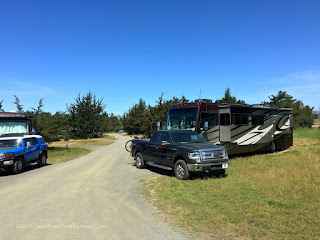 One of the highlights of our visit was the Hearst Castle,.
It was built by Newpaper Magnate William Randolph Hearst, starting in 1919
and was never completely finished.
Construction was halted in 1947.

Riding the bus up the 5 mile driveway you ascend 1,600' above the Pacific Ocean.
Along the way you get glimpses of the castle on its Mountain Top Perch.

Ascending some stairs from the bus stop we saw this beautiful home which I first thought
was the castle but learned it was only one of the several guest houses on the estate.

This guest house was used in the movie Spartacus. 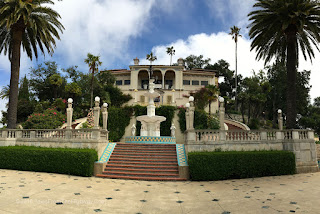 Turning around - behind us was the "Neptune Pool" currently drained for repairs.
The temple in the center is a 2,000 yr old Roman Temple that was moved from Europe and
reassembled here piece by piece.

Continuing on our tour we climb some more steps and the Main house (Casa Grande)
dominates the view. 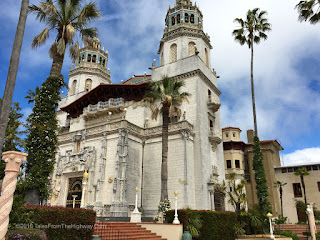 A focal point throughout the buildings and grounds of this estate are the thousands of artifacts.
WR Hearst was a prolific collector and his massive collection remains today
just as when he occupied the Castle.

Walking the grounds you will see objects as old and rare as 3,500yr old Egyptian Statues.

Entering through the Castles main entry leads you to the reception room.
It was here that guests would gather for a 7pm happy hour, surrounded by
16th century Tapestries from Europe. 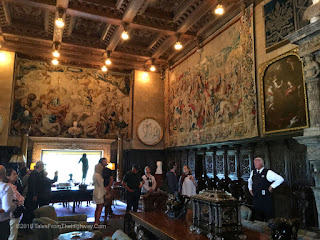 At 9pm dinner was served in the Main dining room.
Mr Hearst would sit in the middle of the table rather than at the head.
When asked why he replied:  "anywhere that I sit is the head of the table" 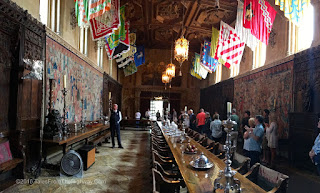 800 year old ceilings throughout the castle were purchased and removed from the
Great Halls of Europe and the rooms here were built specifically to accommodate the ceilings. 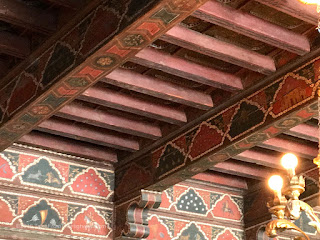 One of the two tables in the billiard room, again surrounded by 16th century tapestries. 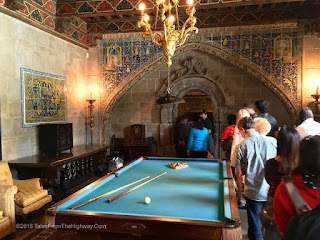 A tapestry behind one of the pool tables. 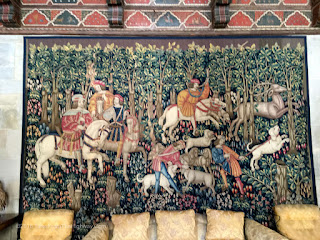 Perhaps my favorite part of this visit however was simply walking the grounds.
After the tour concludes you are free to wander, and our visit was perfectly timed
for the spring flowers that were on display.

As we strolled about the air was filled with the scent of Rose and Jasmine. 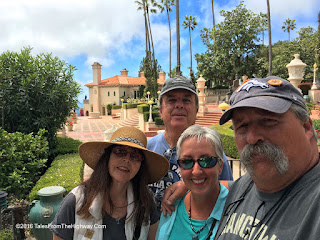 -
A panoramic view showing a guest house (center) with the Pacific to the left of the
guest house, and the steps to the main entrance to the Castle to the right.

A better view of the Pacific Ocean, 1,600' below the guest house patio.
Not a bad place for a guest house! 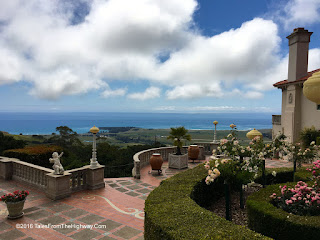 The blooms were everywhere. 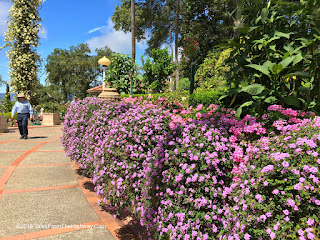 There were many activities that guests would enjoy when visiting.
A movie theatre, and a Zoo complete with exotic animals were just a couple of diversions
that one could partake in.

A heated indoor pool was located below the Tennis Courts. 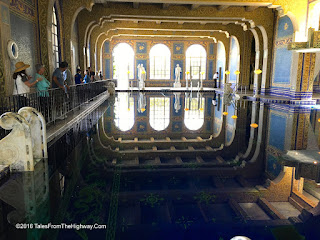 Gold inlaid tiles adorned the floors and walls.
A true Gentleman could not expect to swim in anything less after all. 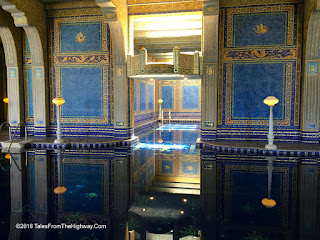 After our visit to the Castle we headed back down the mountain to take in the salt air.
The Central California coast is quite beautiful and in many spots has a feel to me
much like the Oregon Coast. 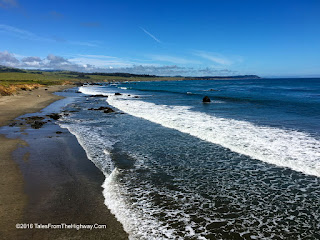 Heading back to camp we stopped to view this herd of Zebras grazing in the field.
These are descendants of the herd that used to be part of the Zoo that was on the grounds
of the Castle. 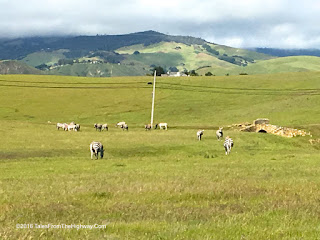 This afternoon we took a trip south for a couple of hours to visit Morrow Bay, Ca.

It was a good day for the surfers and they were out braving the cool waters. 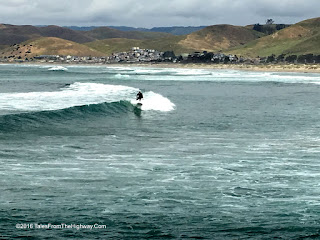 We stopped for a seafood lunch along the picturesque waterfront.
Eating my Halibut brought back memories of our Alaskan Trip, and kindled
a renewed urge to go back.

A pair of sea lions were lounging on the rocks outside of our lunch stop. 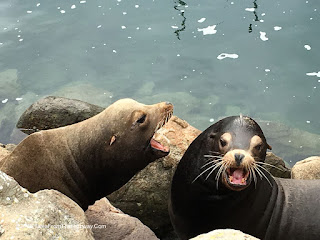 On the way back to camp we stopped at the Cambria Farmers Market.
The produce was fresh fresh fresh.
Most looked as if it had been picked only hours earlier. 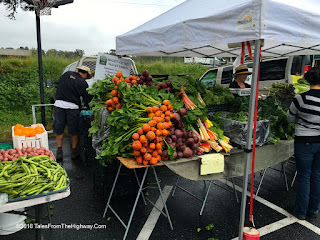 Back at camp its late Friday and the weekenders are starting to arrive.
This is a dry campground - no utilities - and its been real quiet here with the sites
only about 20% filled.
Now the folks are arriving with their generators so we'll see how quiet it remains.

Fortunately the generator hours are 10am to 8pm (and enforced) so there will be no all night
running for CPAP machines like there sometimes is out in the desert.

Tomorrow we have an AM lighthouse tour, visits to Sea Lion areas, and more
activities but they will have to wait till the next blog.