The area around the Hearst Castle has a lot to offer in its own right.
Following our tour of the Castle we spent a couple more days exploring
the local area and its special sights.

On Saturday morning we took a tour of the Point Piedras Blanca Lighthouse.

First lit in 1875 it has been guarding the point since then.
Damaged in 1948 by an earthquake 6 miles off of the point - the upper light and
several floors were removed to lessen the weight on the foundation.

A smaller - but just as powerful light atop the lighthouse continues to function
and provide its nautical duties. 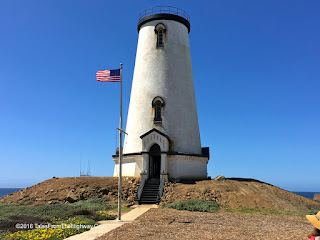 Looking North from the lighthouse - you can see Big Sur some 50 miles distant. 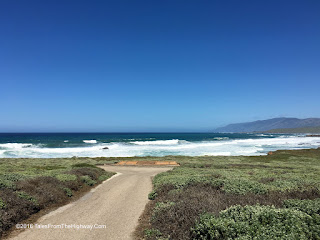 Looking up the stairs from below.
We were not allowed to climb the stairs due to safety concerns. 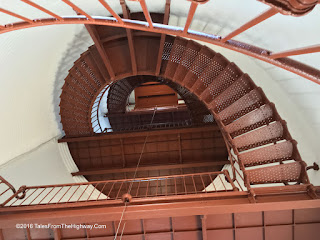 Just about a mile south of the Lighhouse is the Piedras Blanca Elephant Seal Rookery,
the largest on the West Coast.

Over 25,000 Elephant seals call this beach home at one point or another. 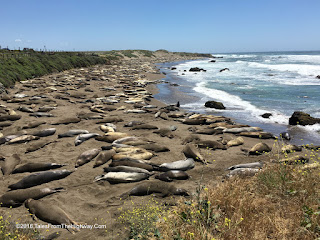 This time of year was mostly molting seals.  They are losing thier fur coat
for the new one underneath. 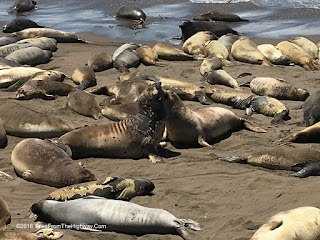 West coast sunsets are always nice since the sun is setting over the ocean. 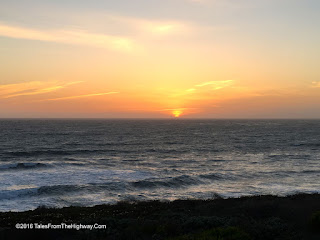 Sunday kept us closer to home and we explored Cambria.
They have a nice boardwalk along the ocean so we took the dogs along
for the walk among the wildflowers. 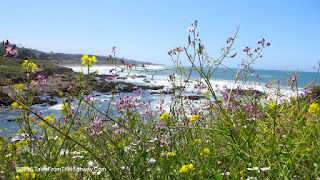 Ever present along the coast, we spotted a couple of seals swimming in
a calmer area inside of the surf line. 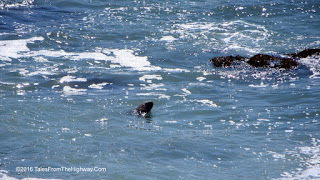 These beautiful purple flowers were everywhere.  As best I can tell they
are called the Pride of Maderia. 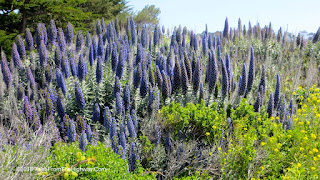 The oceanfront boardwalk weaved among the twisted Cypress Trees
which provided a nice windbreak to the strong Pacific Ocean winds behind them. 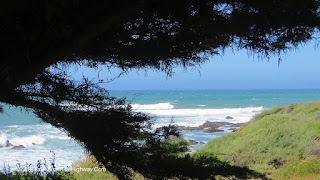 Tomorrow morning its time to say Goodbye to Ron, Maxine, and the coast.
We have a deadline on Thursday in Walla Walla Washington about 900 miles north of here.

The Map below shows our next 4 days travels.

Then Tuesday another 5hrs or so to a State Park outside of Bend, Or.

Weds we have a few hours to an Army Corps campground on the
Columbia River in Washington.

And finally Thursday a short hour or so drive to Walla Walla where we will
shut down for 4 days and drink some wine with friends. 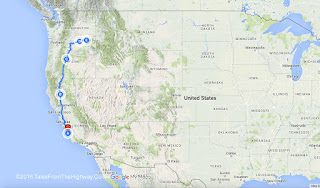 After Walla Walla, I'm off to a state park in Wenatchee Wa for a week or
two while Kate flys to Chicago and visits with a friend.