Since leaving Grand Canyon we have traveled south thru
Arizona and into California to San Diego.

Our first stop was Buckskin Mountain State Park.
You may recall that we were here earlier this year before Quartzsite.

While here we celebrated my birthday.
I have finally qualified for my "Geezer Pass"  the $10 lifetime
Senior Parks pass.   I hope to get many years of good use from it
when we are somewhere that I can purchase it.

The group greeting me the morning of my birthday. 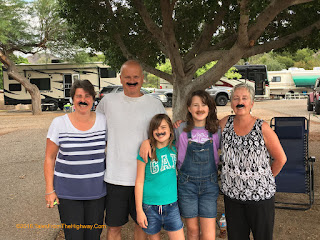 After Buckskin, we headed south to Imperial Sand Dunes in California.
We had planned to boondock the night there but a storm was coming in from the coast
so once we arrived there we decided to move onward to our final destination - San Diego.

One of our highlights was a visit and self guided tour of the USS Midway.

Looking down this passageway (they are not called hallways on ships)
has that "Get Smart" effect...  (remember the TV Show?) 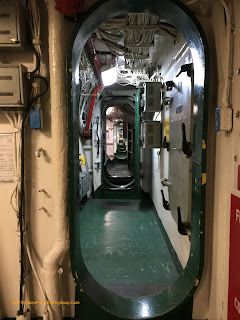 When the retired Chief Petty Officer who was the tour guide in the engine room learned
that I served in the Navy - he opened up some restricted areas of the engine room
and gave us a special tour. 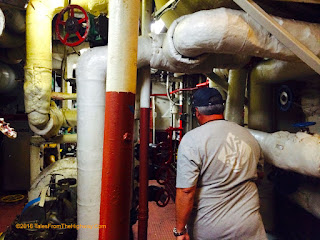 Up on the flight deck, the girls practiced giving the launch signal. 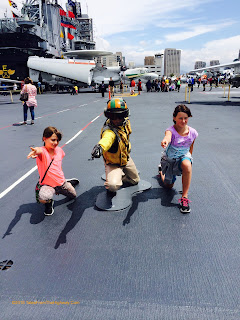 While in San Diego we had Raclette one night.
Raclette is a Swiss meal of assorted vegetables, meats, and
melted Raclette Cheese.

We had it while visiting Switzerland last year and bought ourselves the proper
machine to prepare it here.    Finding Raclette cheese can prove to be challenging
at times but I've found that Whole Foods usually has it. 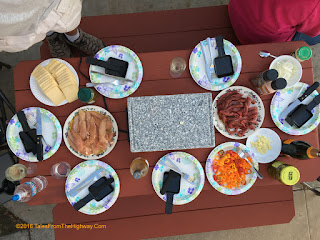 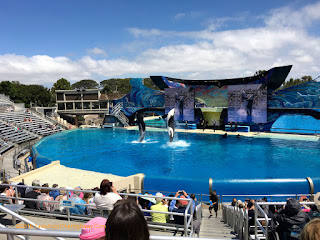 We took one of the rides that gave us a good soaking. 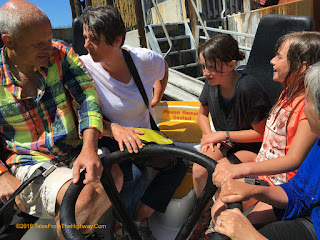 Dolphins peer over the edge of the pool 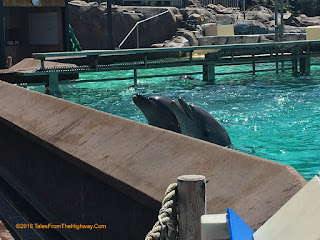 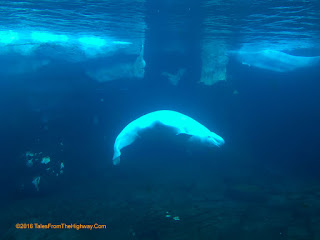 We stayed at the Chula Vista RV Resort on the shore of San Diego Bay.
It was a very nice park in a great location. 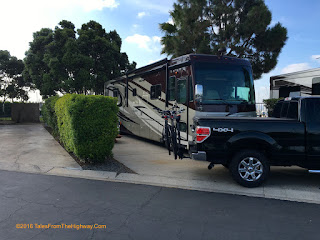 This was the view behind our bus. 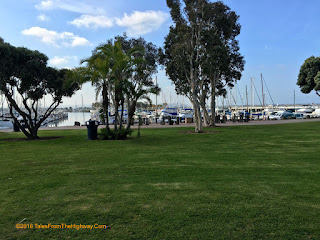 While here I decided to make some Pancakes for the girls.
Simple Buisquick Pancakes...  put some water in the jar, shake, and cook.

While shaking the jar - I got a bit to enthusiastic and all of a sudden the screwed on cap
poped off and the contents spewed all over me, the microwave, the stove, and elsewhere.

The girls got a good laugh out of my unintended antics. 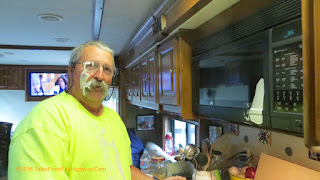 On Weds night we went out to the Gaslight District of San Deigo for a
final farewell dinner.

The district is full of great restaurants and the streets come alive at night. 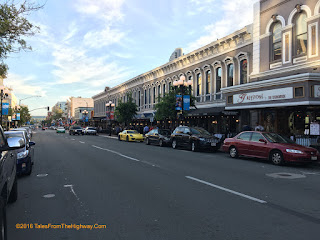 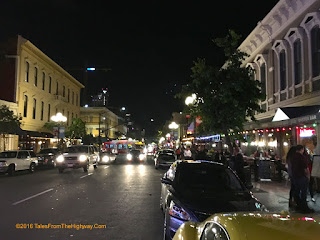 Michaela had picked out a great restaurant - The Greystone Steak House.
Wagyu Beef is served for $20/oz.  A 16oz steak is $320.

Needless to say I went with the US 21 day aged Prime NY Strip
and still had a terrific meal at a more realistic price point. 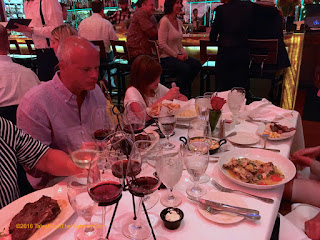 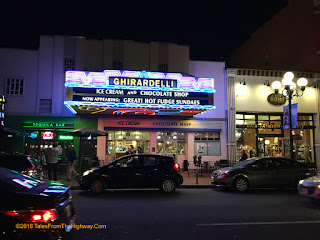 On Thursday morning it was time for sad good-byes.
Its always sad to say good-bye to our traveling companions but this time
was especially hard.

We have seen a lot and shared some amazing sights over the past 7 weeks.
One thing I will always remember will be the sight of Marcels face when
he saw the Grand Canyon for the first time, only to be repeated later by
Michaela and the girls when they arrived at the rim.

The map below shows our track over the past 7 weeks starting in Riverside, Ca
and ending in San Diego.

2400 miles of some of the best the Southwest US has to offer. 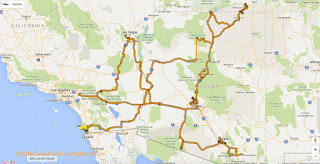 After saying good-bye we headed north east back to Las Vegas.
We are here so that I can pick up a custom brace that was made for my knee.
This brace will hopefully delay the inevitable knee replacement that is down the road.

We are back at the LV Motorcoach resort thru Monday.
On Tuesday we will head back north west to the California coast
where we will meet up with Ron & Maxine for 5 days.

After that we are headed north - eventually to Walla Walla Washington for
our annual spring release wine weekend.

We are sad to say goodbye to our Swiss friends but as Marcel said - "after the trip
is before the trip"   There will be more adventures down the road.
Posted by GregK at 11:50 AM