The lions share of unpacking and organizing behind us,
the bus was now neat and livable.  It was time to move on to the next step.

The truck was loaded up with the residue of 2 RV's consolidated into one.
We had clothes, suitcases from our trip to Europe, parts and supplies that
were not needed in the bus and so we put them in separate bins for
eventual transport back to NC. 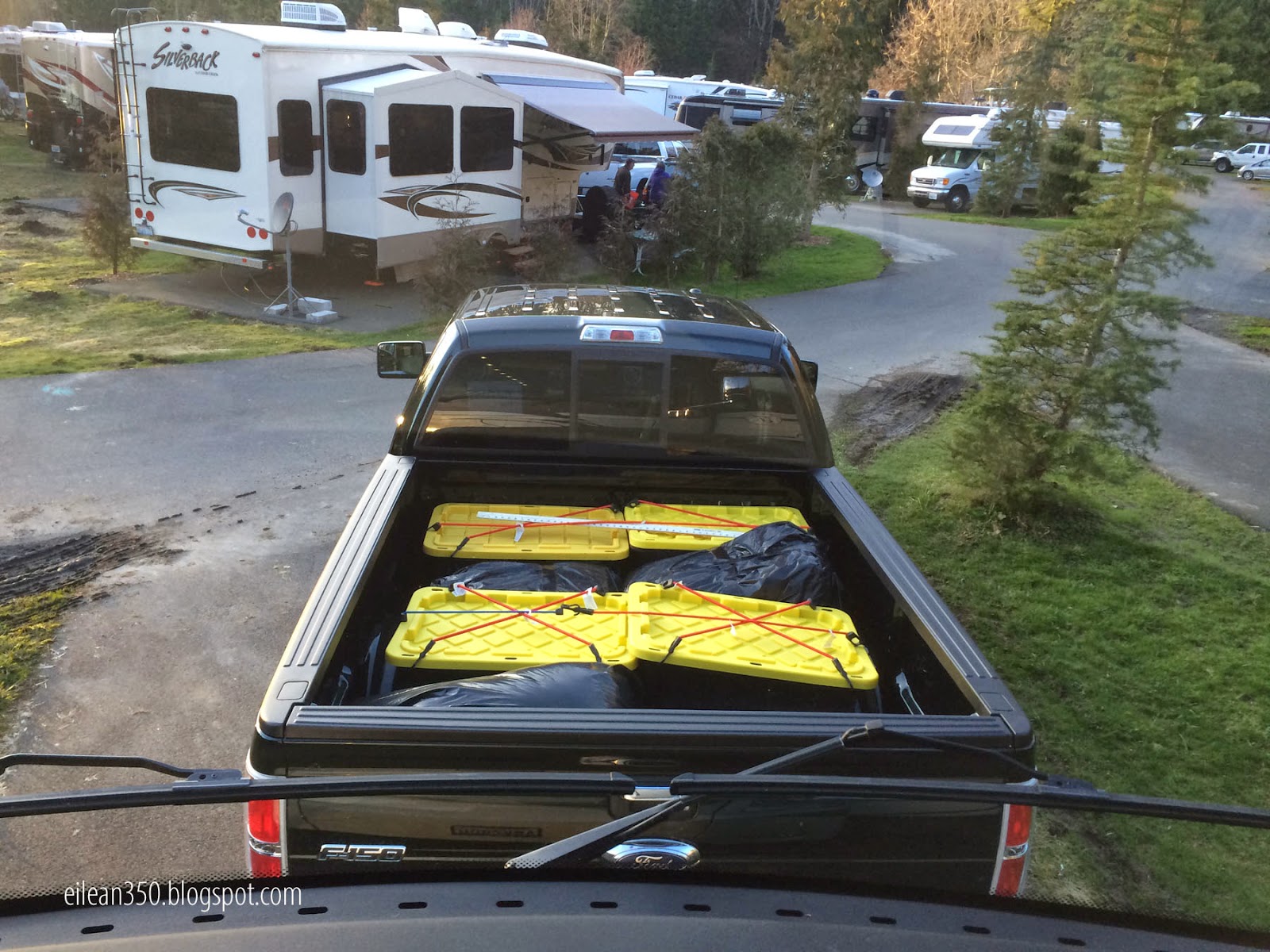 Kate really enjoyed driving the new truck.  It was much easier to maneuver than
the Dually...    I wonder if I will ever get it back. 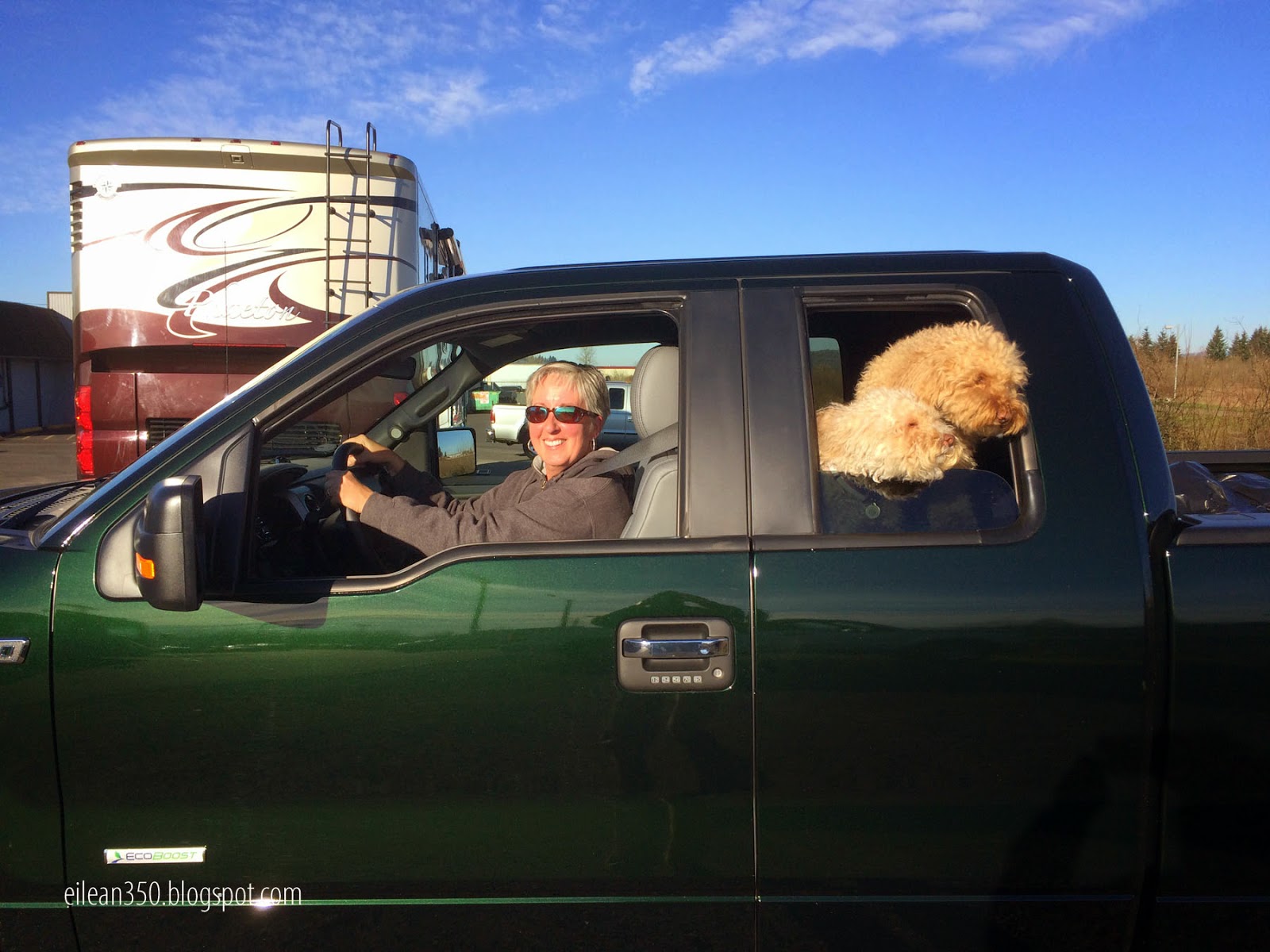 Tuesday morning we had an 8am appointment at Hitch Pro & Tow in Eugene.
They supplied us with a Blue Ox Towbar, plus installed  a tow plate, an Air Force One
Braking System, and electric lights on the truck.

These modifications were necessary in order to pull the truck behind the bus.

It took all day from 0800 to 6pm to finish the work.   In the meantime I worked inside
while Kate read and watched the tube. 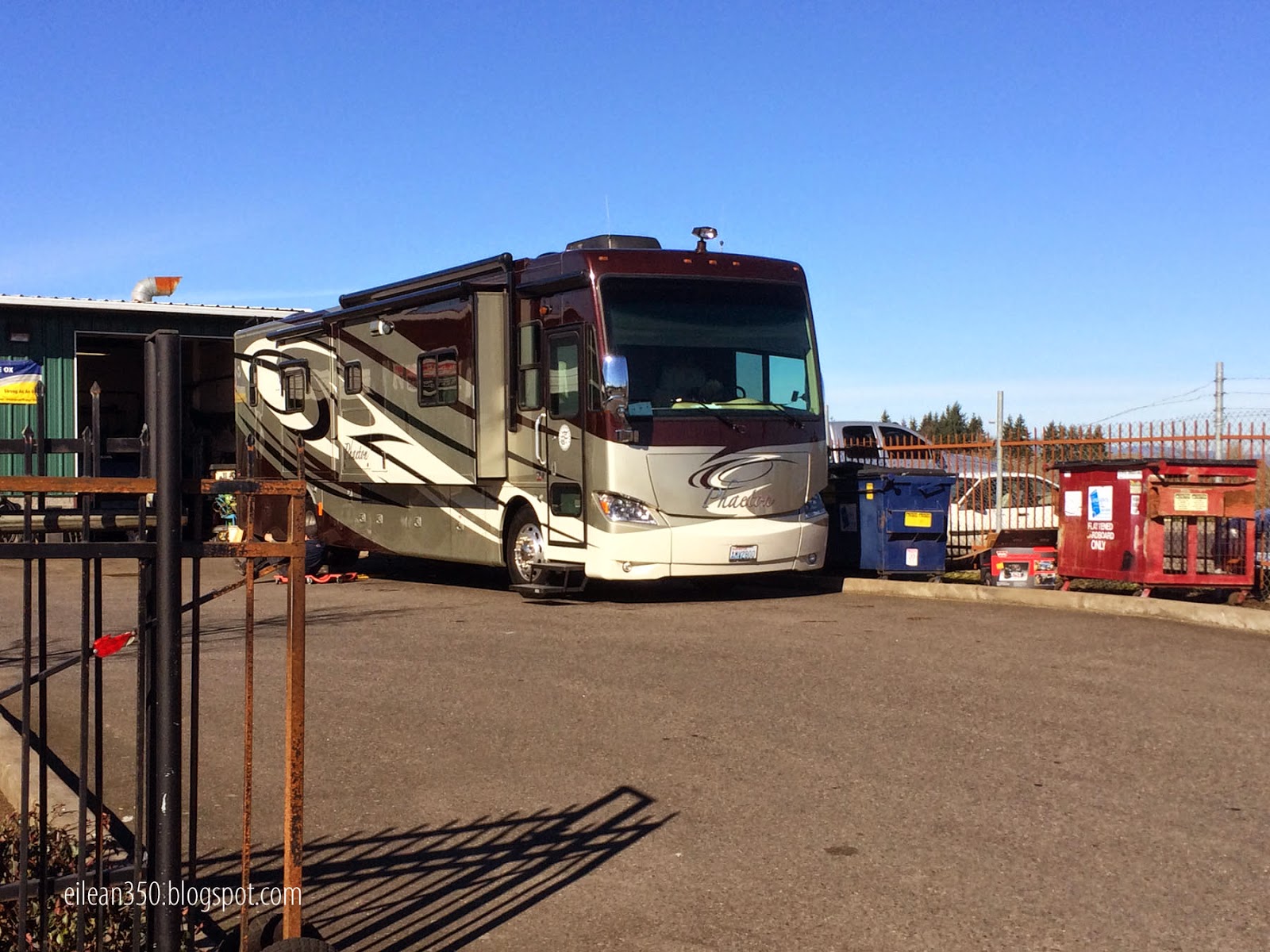 We did go to the bar next door for breakfast.  I had one of "Rays Bowls" a gigantic
concoction of Home Fries, Ham, Bacon, Sausage, Cheese, and eggs.
It was quite good! 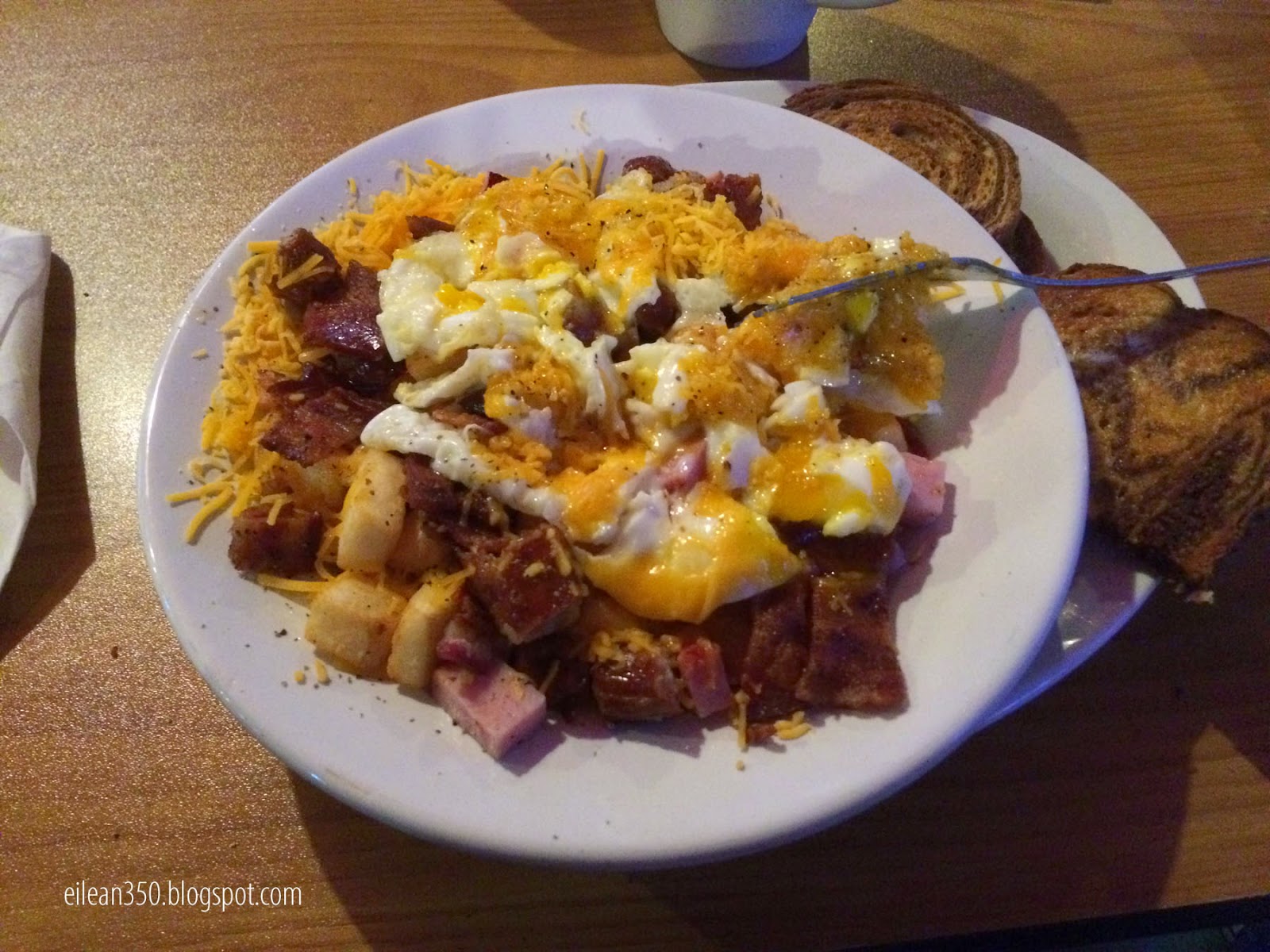 The next morning we resumed our journey southward, this time towing the truck
behind the motorhome.  It was Kates first time riding in the bus.
As you can see by the picture - she settled in to the fine ride in style. 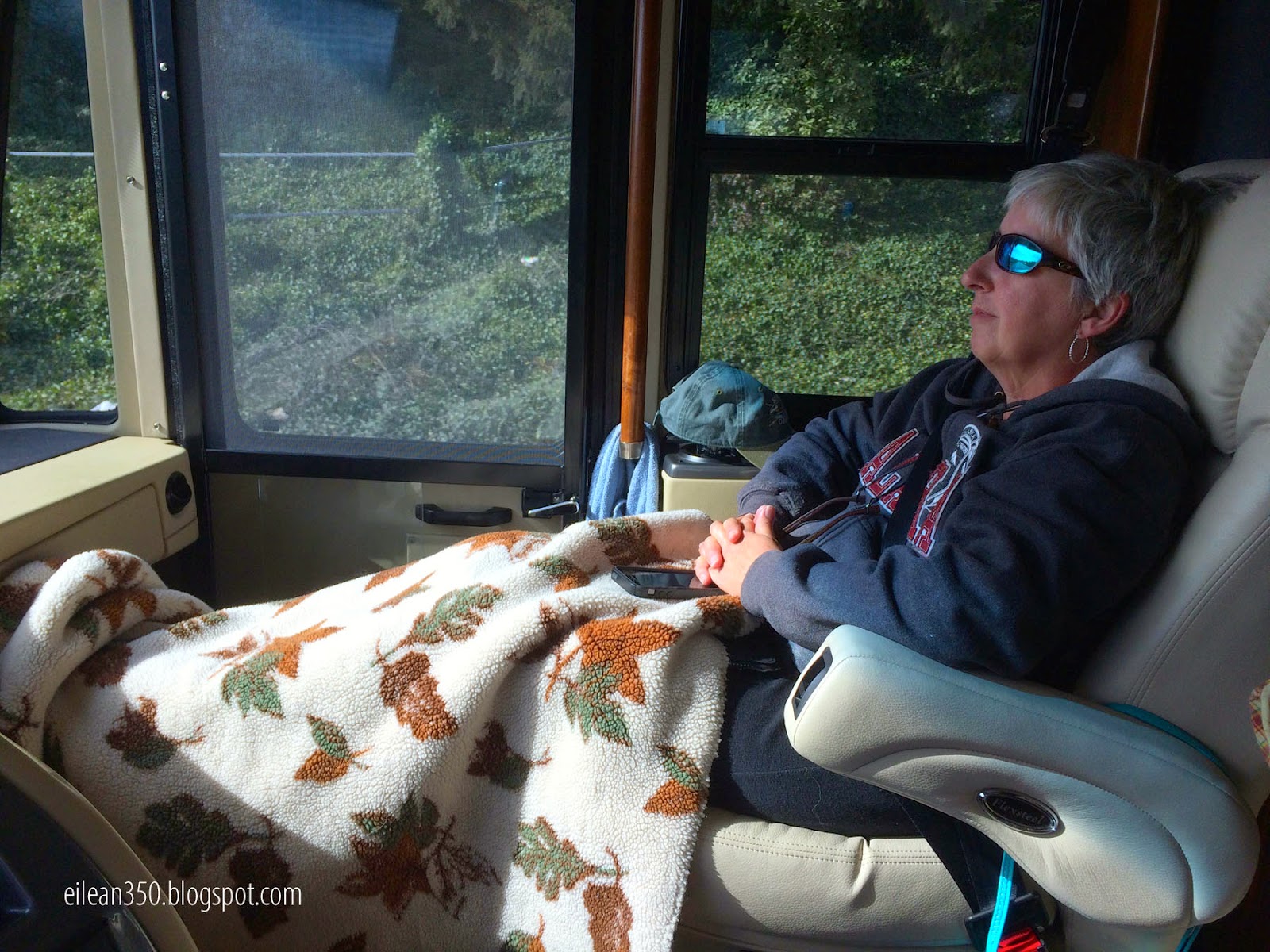 Stopping at a rest area along I-5 in Oregon, the truck in tow. 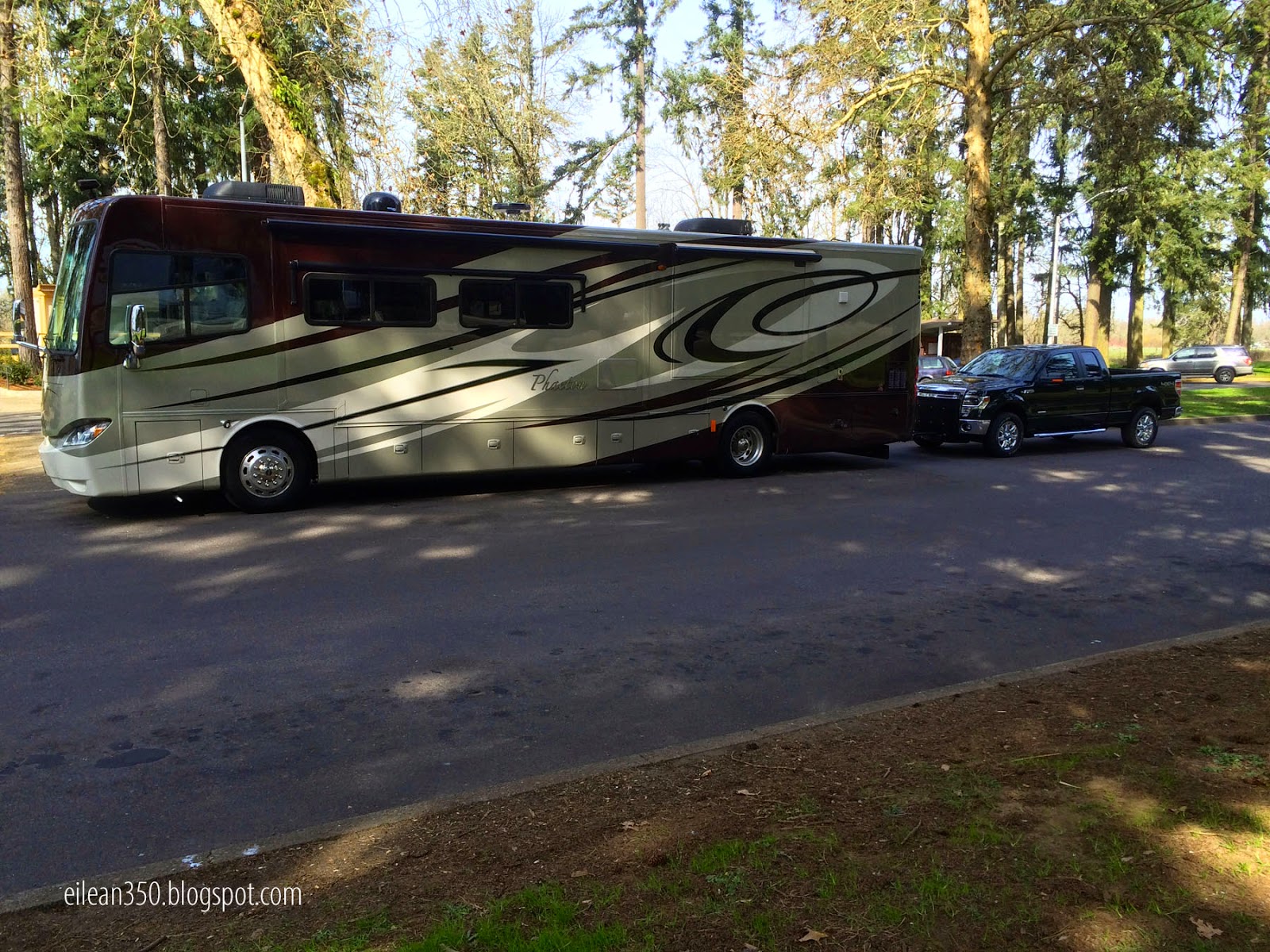 It was also the Doodles first ride in the bus.
The new sounds (air brakes etc) concerned them for a while but they
soon settled into the routine.

Meanwhile Gracie took a turn at the wheel. 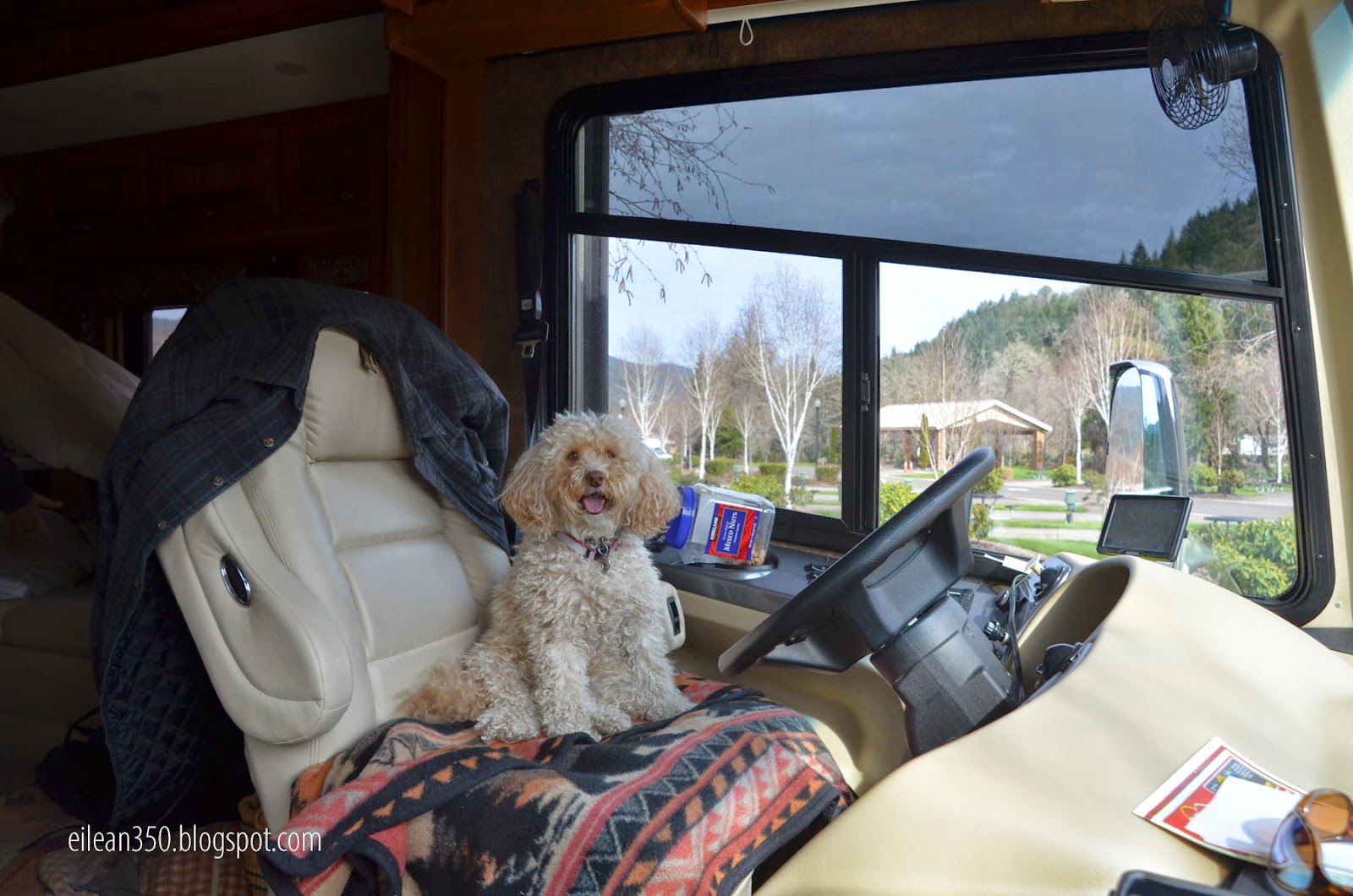 Our first stop after Eugene was 7 Feathers Casino.
It was only 100 miles but I had planned short day because I had a lot of office work to do. 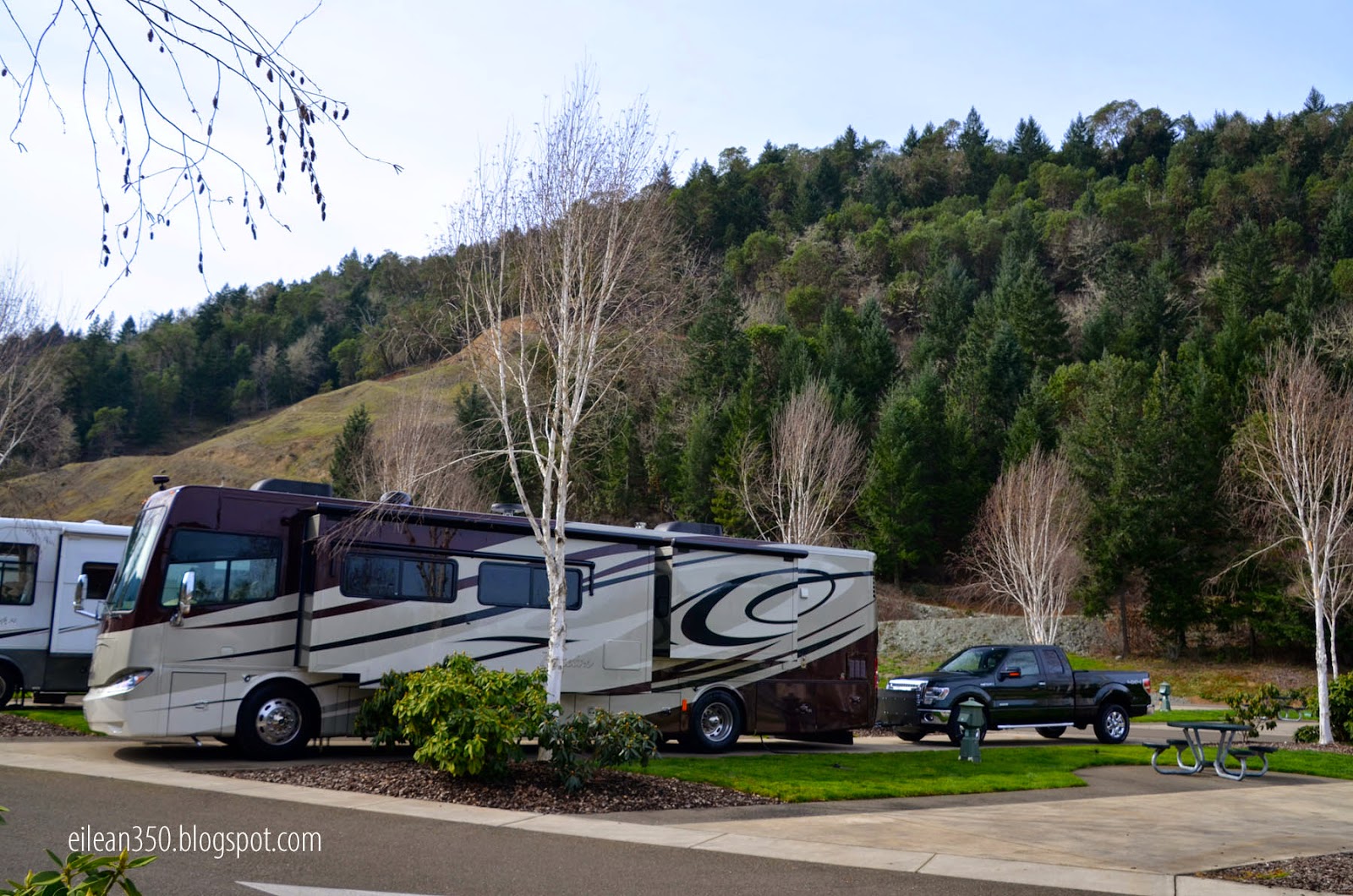 7 Feathers is a beautiful park.
In another month or so all the Rhododendrons will be blooming.

We are now at DoodleCamp - Ron & Maxines.
Our temp registration on the Car and Motorhome have expired...
Washington only provides a 3 day temporary tag and I had 3 of them,
which is the maximum amount allowed.  I had hoped that by the time
they expired I would have my new plates.

I have been trying to get my plates from NC and my dealer has not
been real competent in this regard.  Numerous phone calls and texts to my dealer have
been exchanged...  I'm hoping that by the end of next week we'll be legal.

I did go to California DMV and get a trip permit for the Bus.
It provides me with a temporary registration from point a to point b.
It should cover me for now but one never knows...  every little state has their own
rules and driving around the US can be like driving thru 50 difference countries.

I will be glad when the legal stuff is done and behind me.

Meanwhile life in the bus has been fantastic!
We are thoroughly pleased with our choice and not looking back.

I am going to be installing my energy monitor in the bus electrical system this week.
As always - its my first step in preparing the bus for off of the grid living.
The monitor will allow be to precisely determine our electrical requirements,
and allow me to size our solar system accordingly.