The story of the westward emigration of the American Pioneers in the
mid 1800's would never be complete without talking about Donner Pass
in California.

Even today, truckers speak of the pass in winter with a sort of reverence and awe,
yet when one looks back in time it takes on an even greater prominence.

It was here in the winter of 1846 that 37 of the original 81
Emigrants in the Donner-Reed wagon train died.

After taking an unproven shortcut that wound up costing them
precious time they arrived at the east face of the Sierras too late.

Over the winter half died, due to starvation after becoming snowbound
at Donner Lake and the nearby Alder Creek.

Our campsite is right at Donner Lake and a stones throw
away from where some of the cabins were. 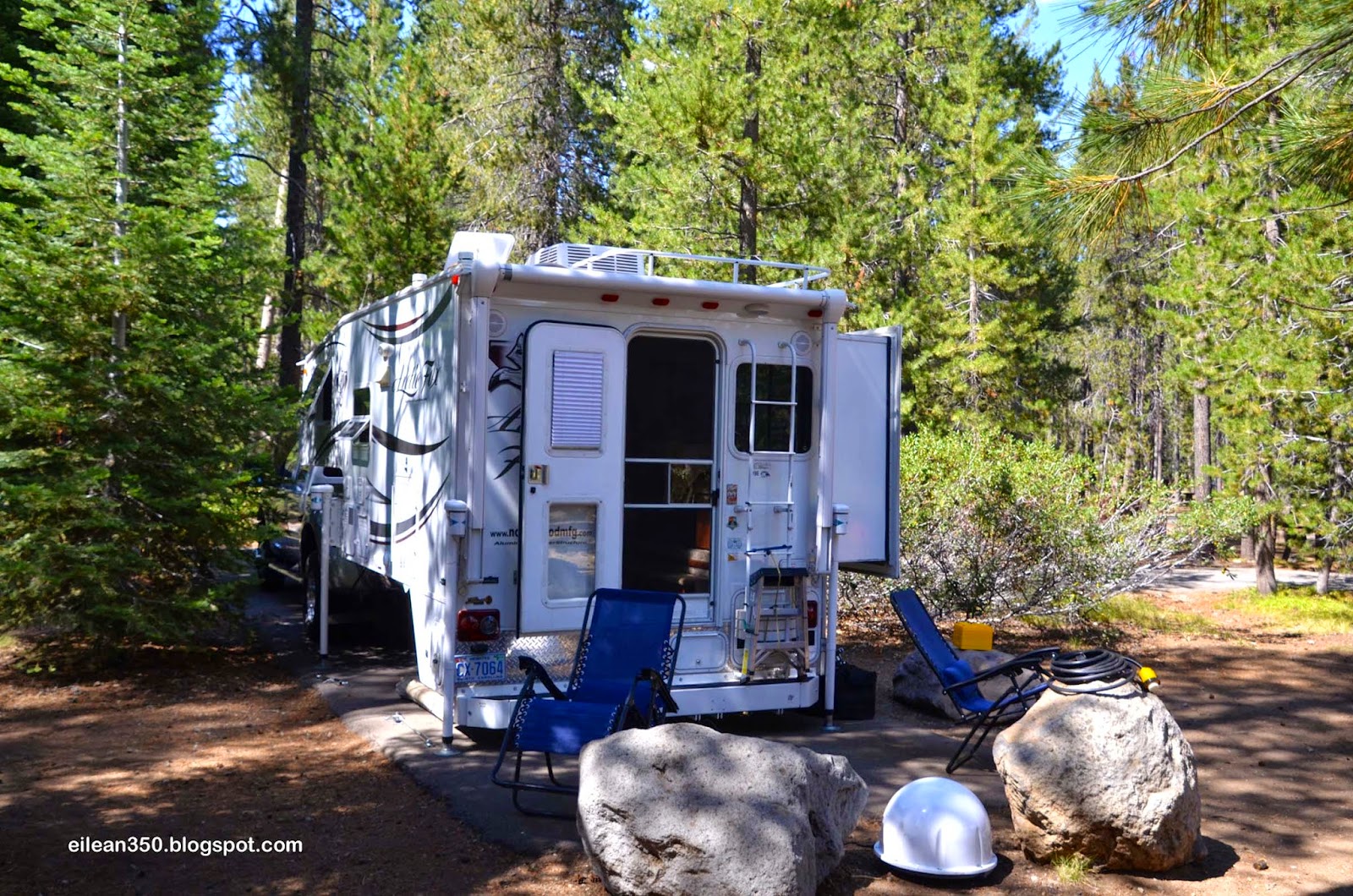 Below is Donner Creek which flows gently from the lake.
It would have provided a ready water source. 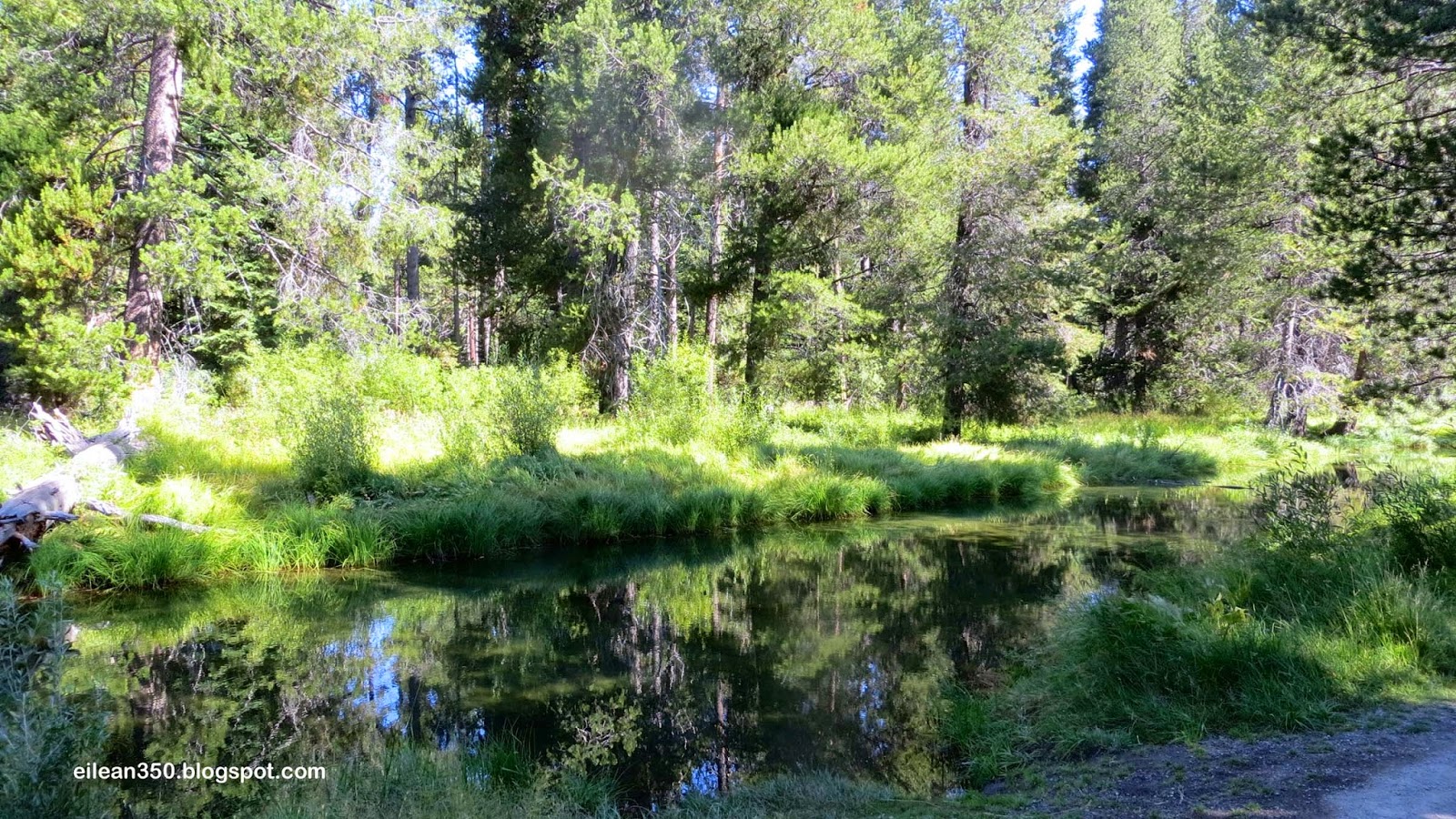 Today a recreational asset...  A Far cry from 1846.
Beyond the lake and to the left you can see the low pass in the mountains...
It was here that the emigrants where headed for.
After making that pass it would have been
mostly all downhill the final 60 miles to civilization,
but it was not to be... 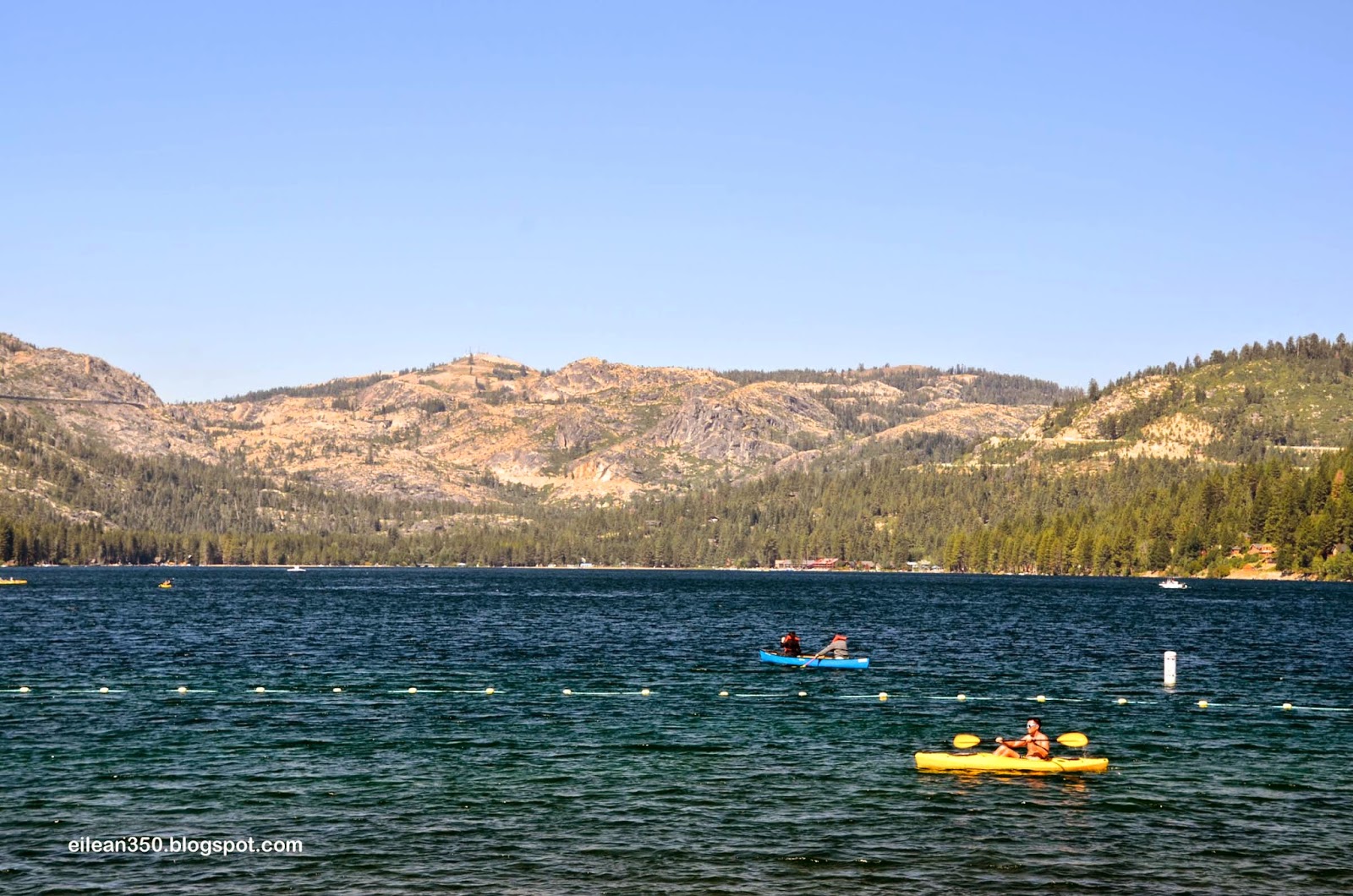 Arriving at Donner Lake they slept for the night.
That night a halo around the moon predicted bad weather...
The next morning the pass was covered in 5' of snow.
An early Fall snow had blocked the pass.
Still they tried to move their wagons over the pass but had to turn back.
Here is the view back towards Donner Lake from up top on the pass. 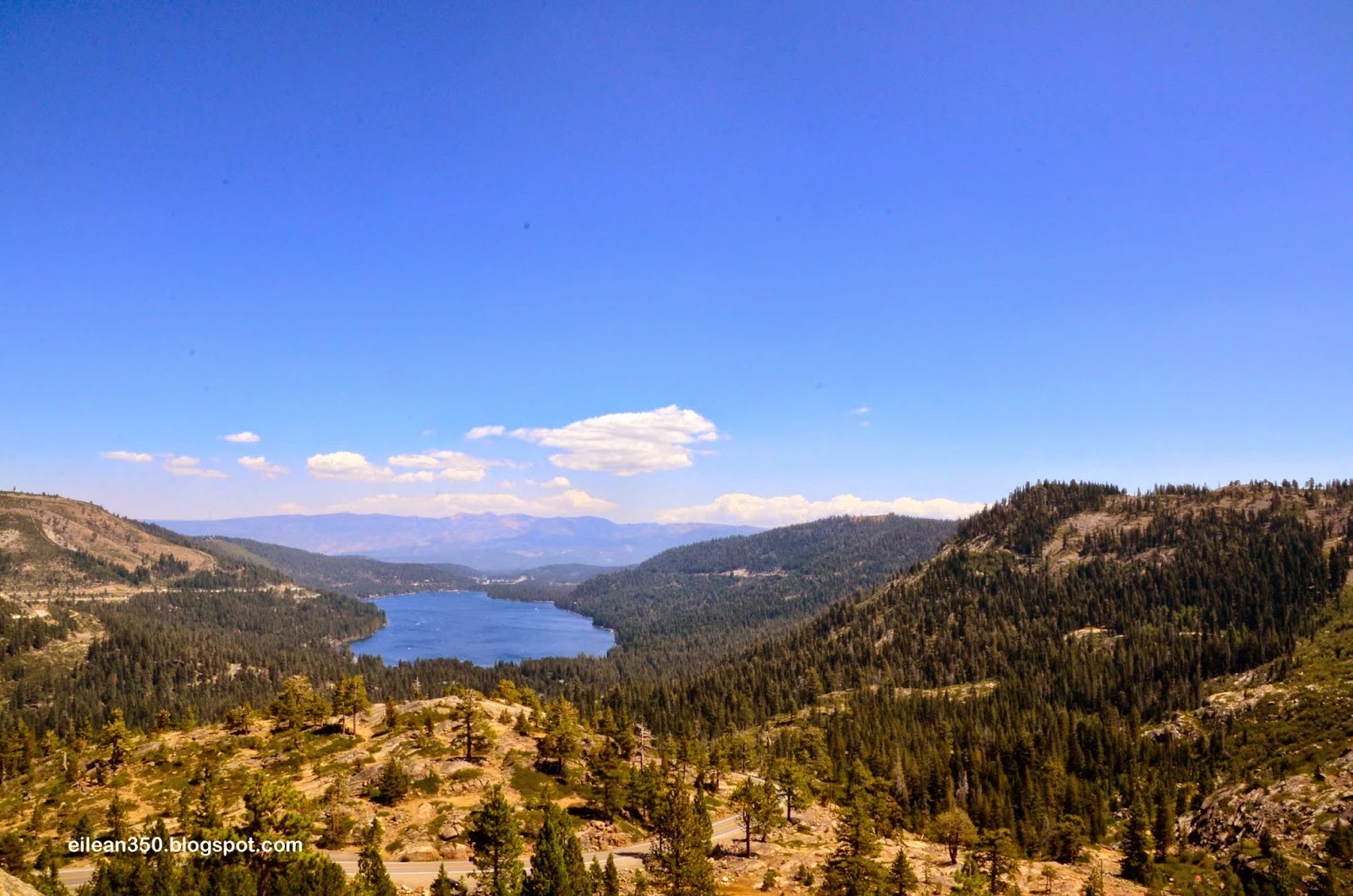 Soon a 4' snowfall down in the valley prevented movement in any direction.
By January over 22' of snow had fallen.
The monument below was erected in 1919 in honor of all the pioneers who opened up the west
It was placed in the exact spot where the Breen Cabin Stood.
The pedestal is 22' tall - the height of the snow that winter. 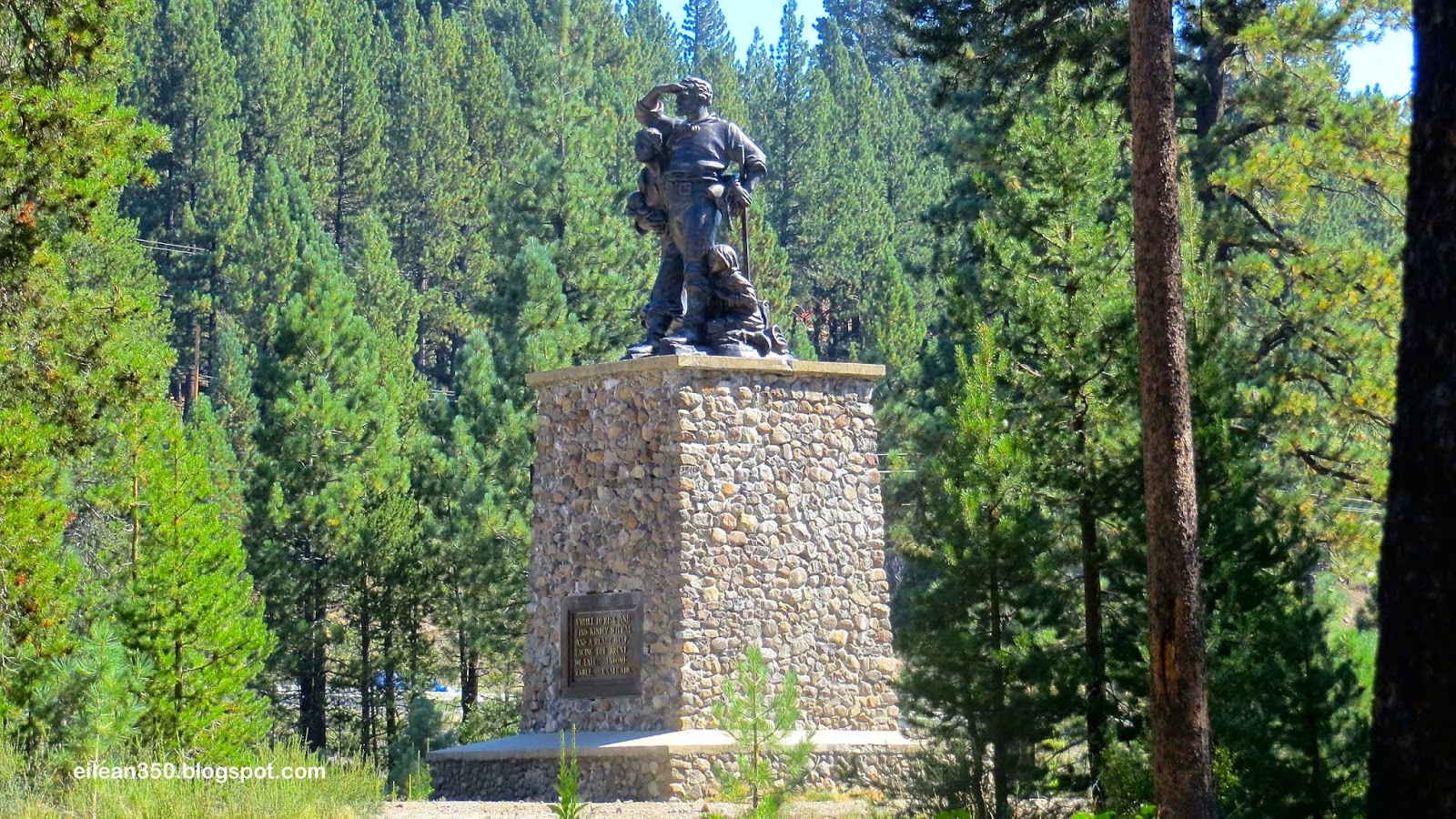 I think the plaque captures the spirit of these incredible people. 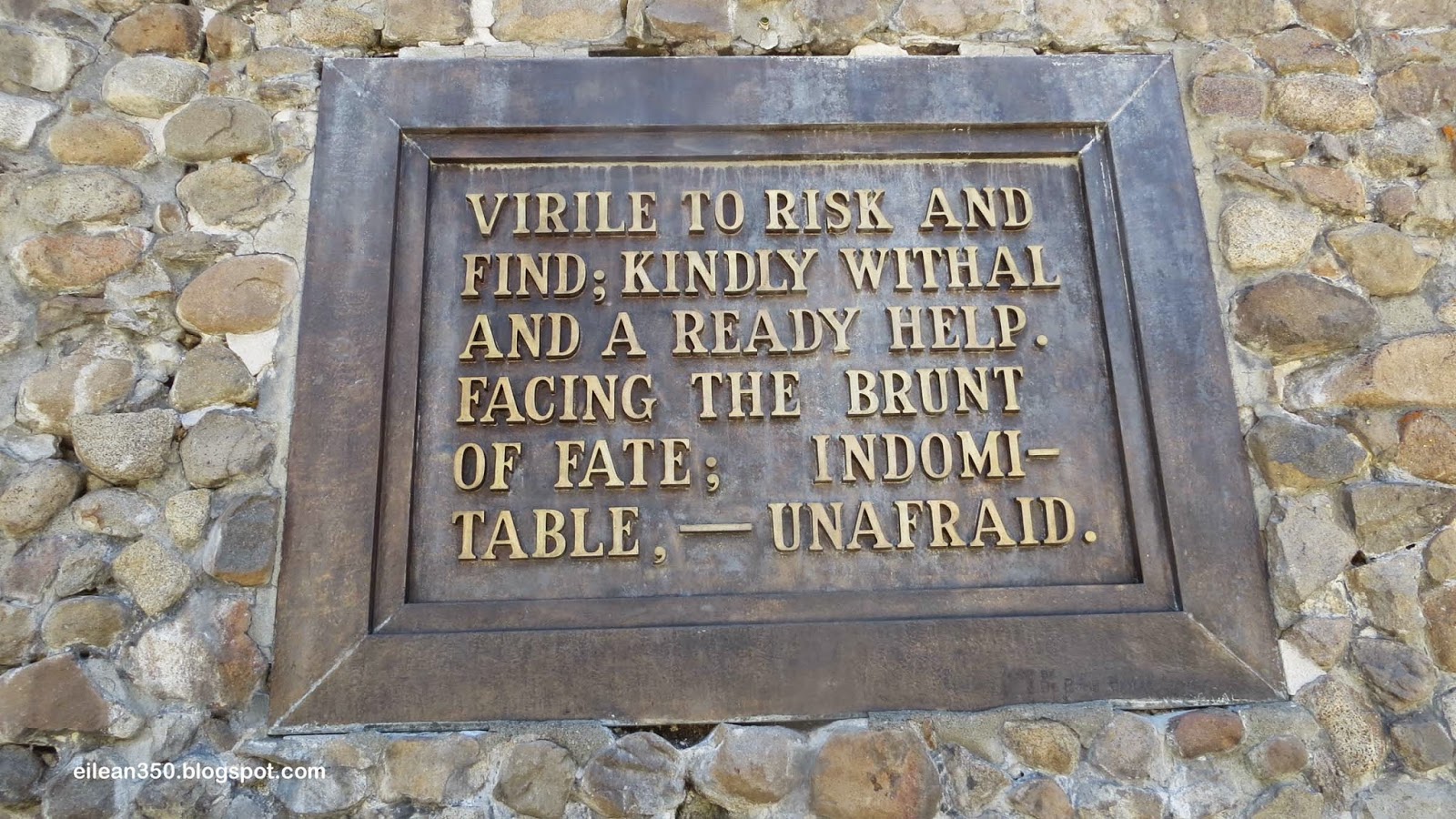 Below - about 150 yards from the Breen cabin is this rock.
The rock formed the north face of the Murphy Cabin. 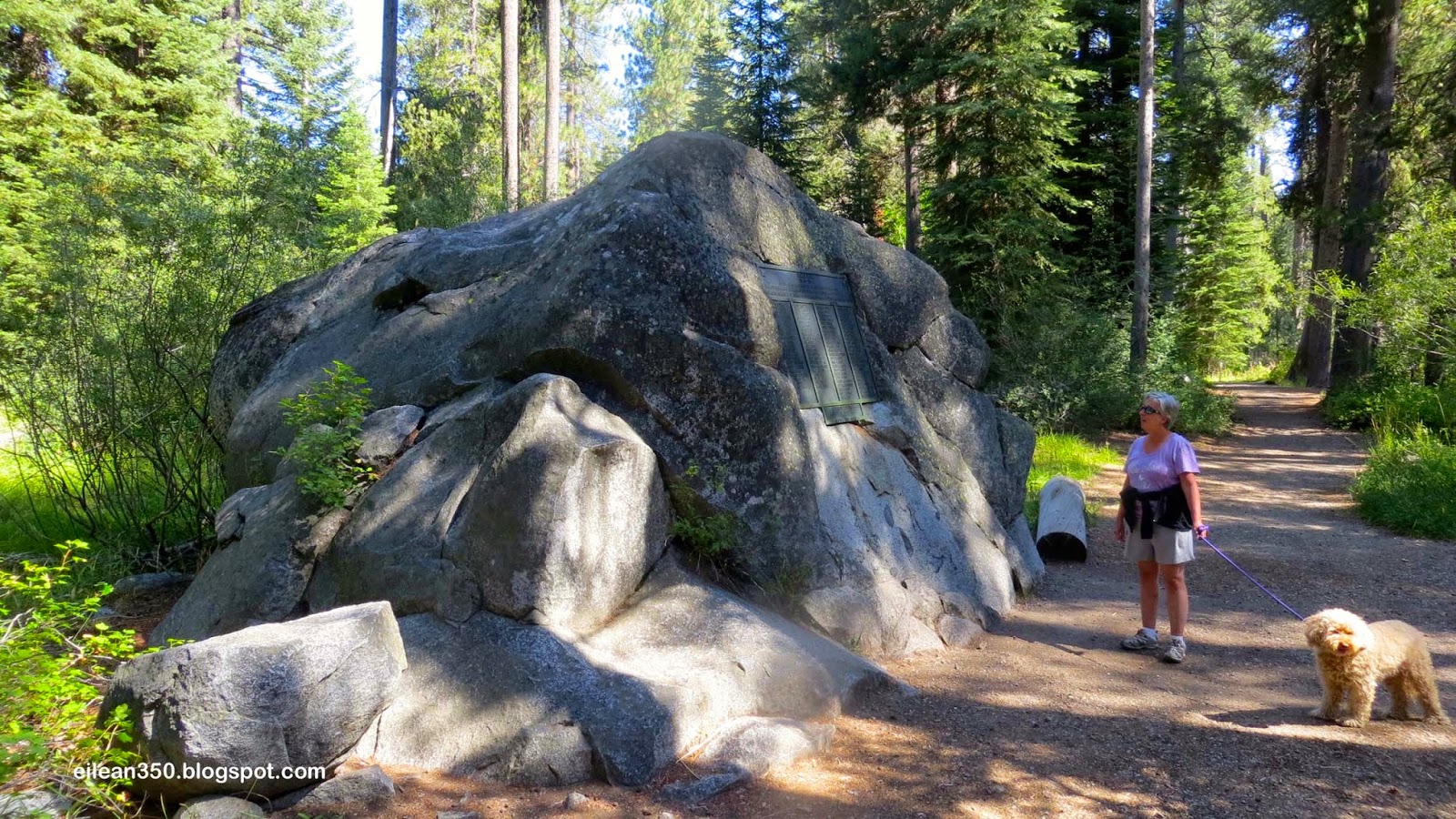 Several miles away at Alder Creek, the Donner Family was first halted by a broken
wagon wheel and then the snow.
There was only time to build a makeshift lean-to against this tree.
24 people were crammed into this small enclosure that was supposed to
protect them from the brutal Sierra winter. 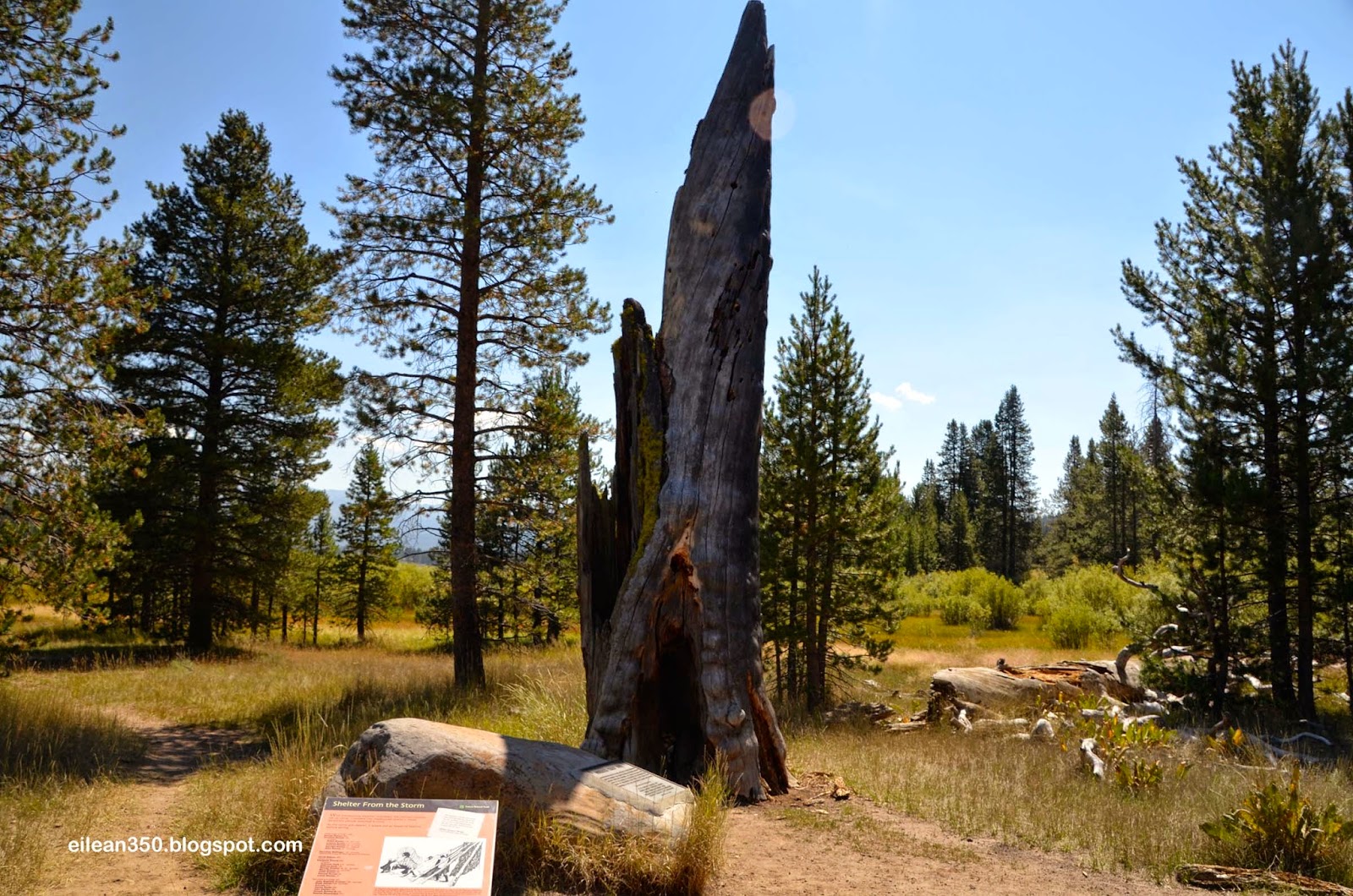 Of the 24 who encamped here - half perished. The story of the Donner Party is only one of thousands that make up the history
of the great migration.

You can find some great information and diaries of the Donner Party Here.

The route the Donners tried to take was the best way thru the
formidable east face of theSierra Nevada Mountains.

This was not lost on the railroad builders who followed.

The Transcontinental Railroad which was completed in 1861 followed this path
across the mountains too, and it was also for this reason that we came here to visit.

The rugged terrain and harsh winters (Donner pass averages 60' of snow per year)
presented a host of challenges.

With brute force and sheer determination they blasted and inched their way
eastward over the sheer cliffs and solid granite.

Snow sheds where build over the tracks so that the trains could run in the winter.

Kate and I climbed up the mountain to walk the old rail beds.
Here we are leaving one tunnel and looking at the next. 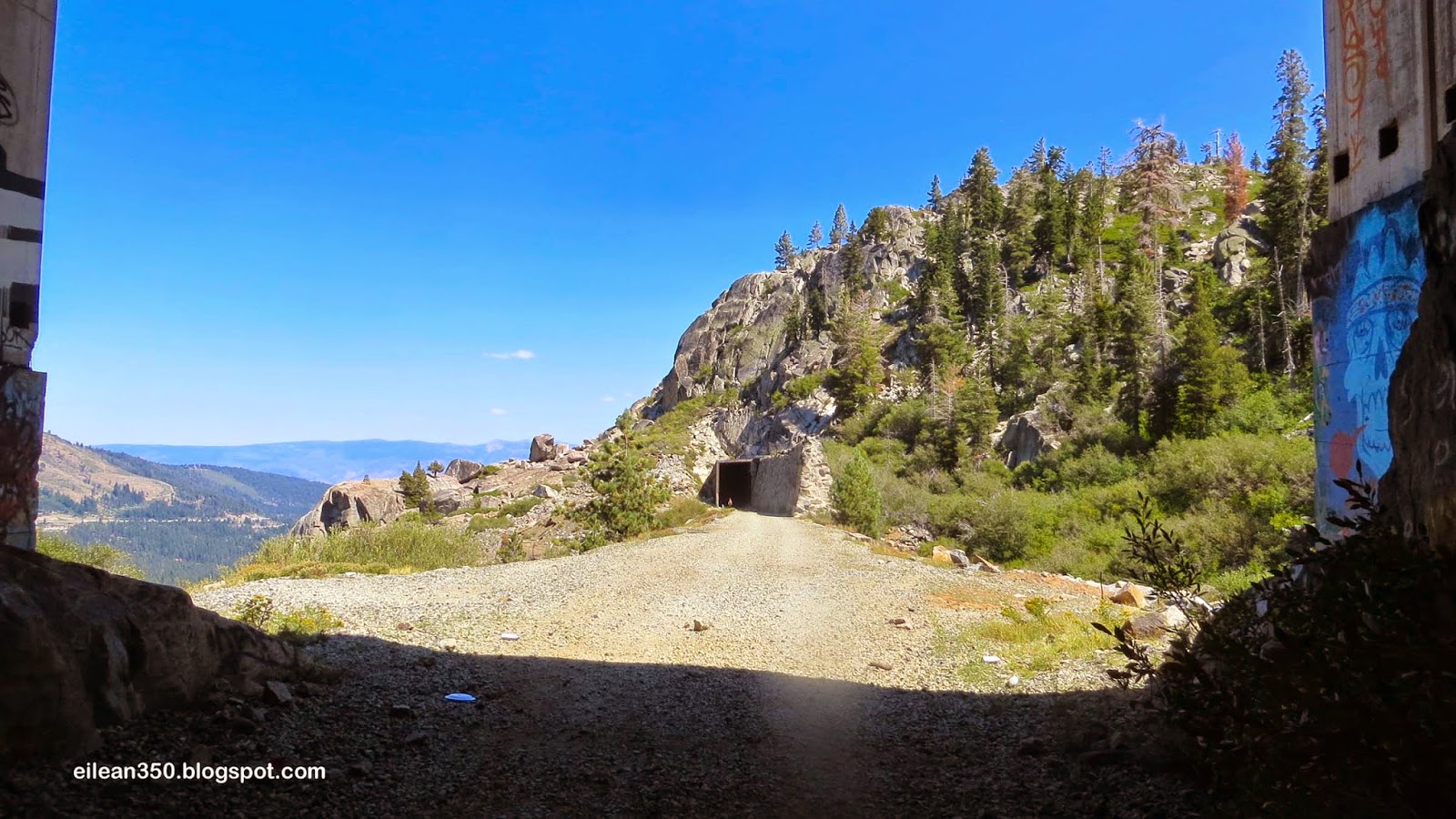 Thousands of Chinese Laborers make this railroad possible.
Below is the Chinese Wall - thousands of tons of rock piled up to create an
embankment to hold the railroad bed. 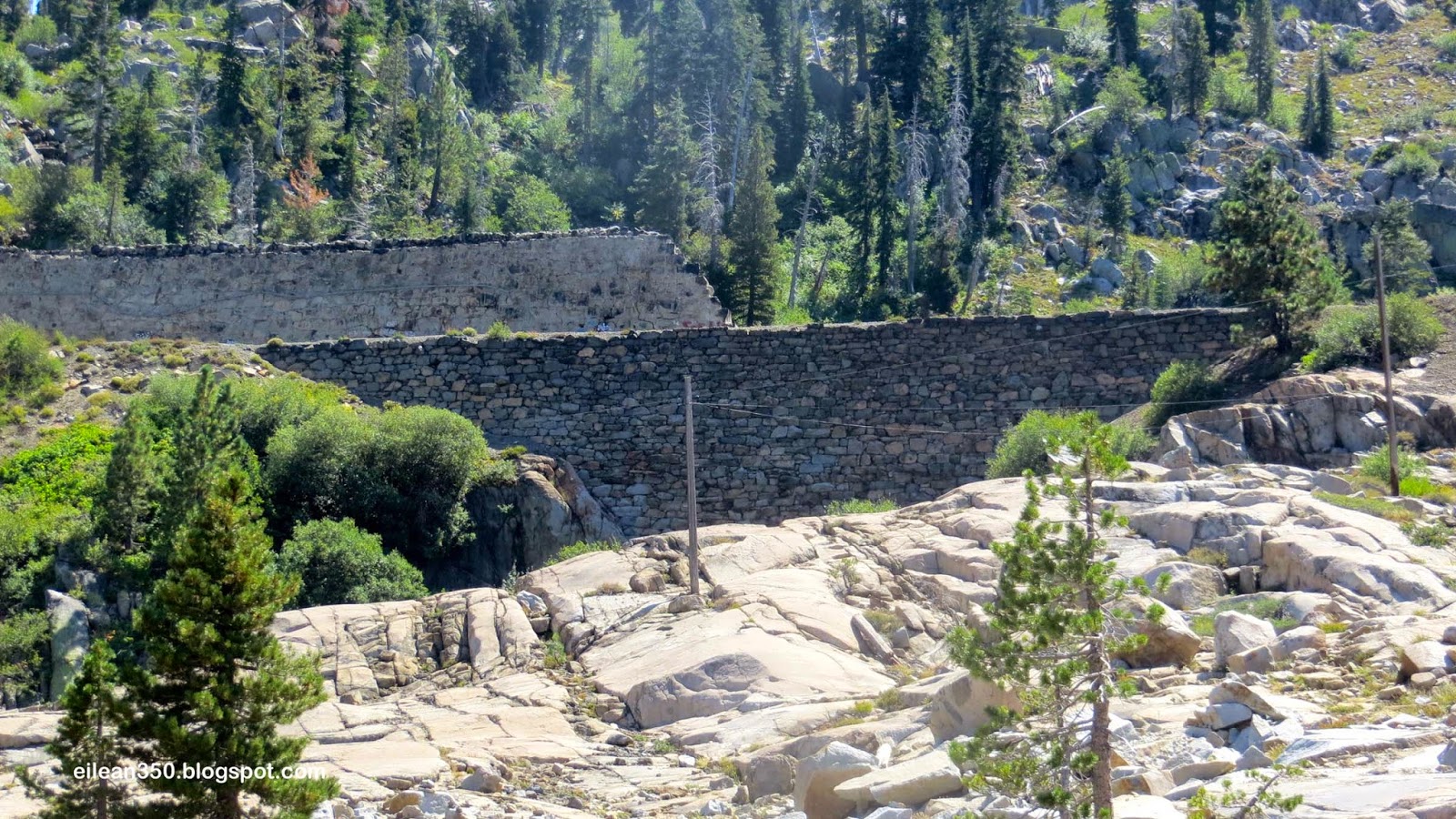 Today some new artists have added their touch to the walls. 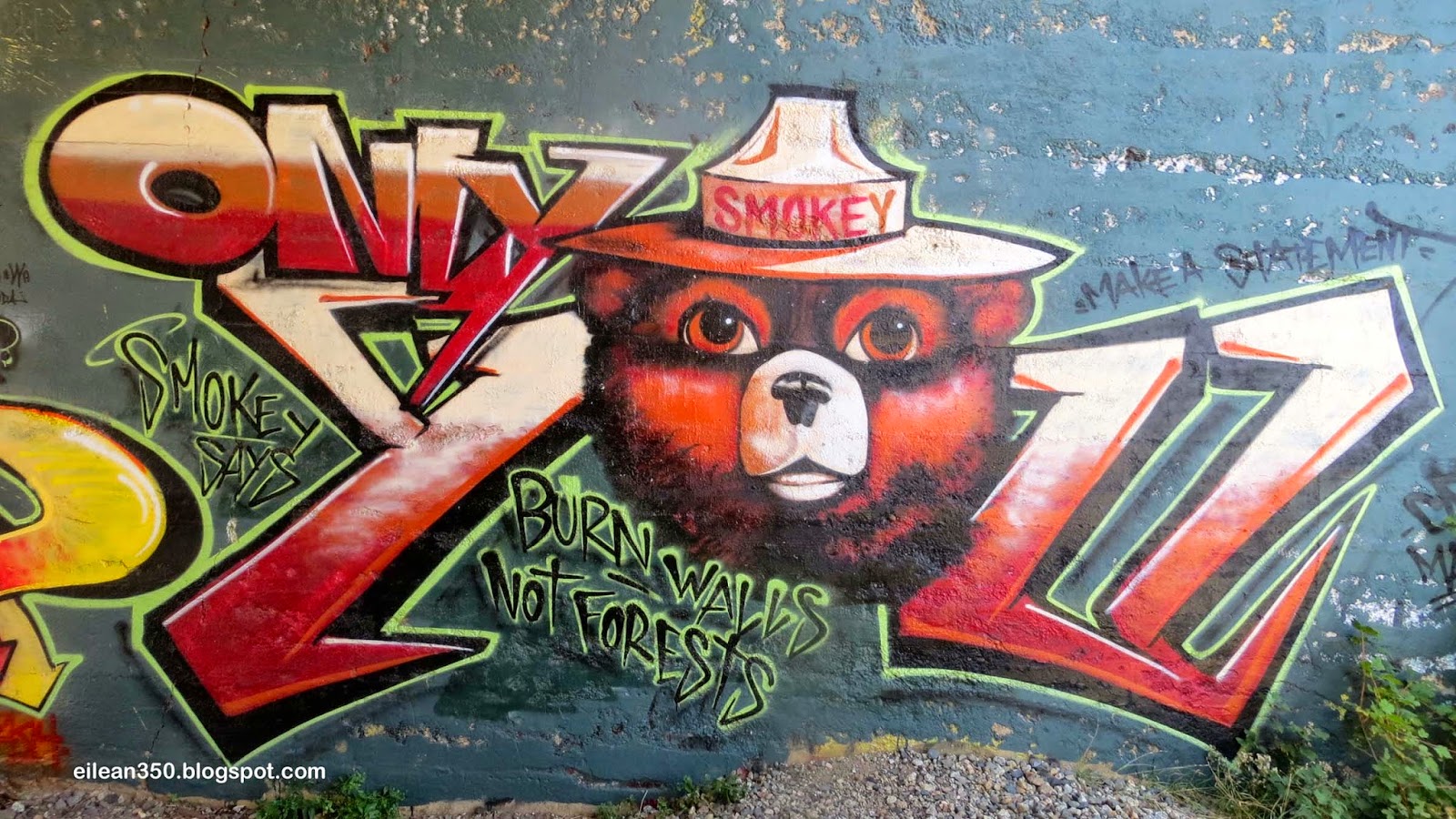 Standing in a snow shed and looking into a tunnel. 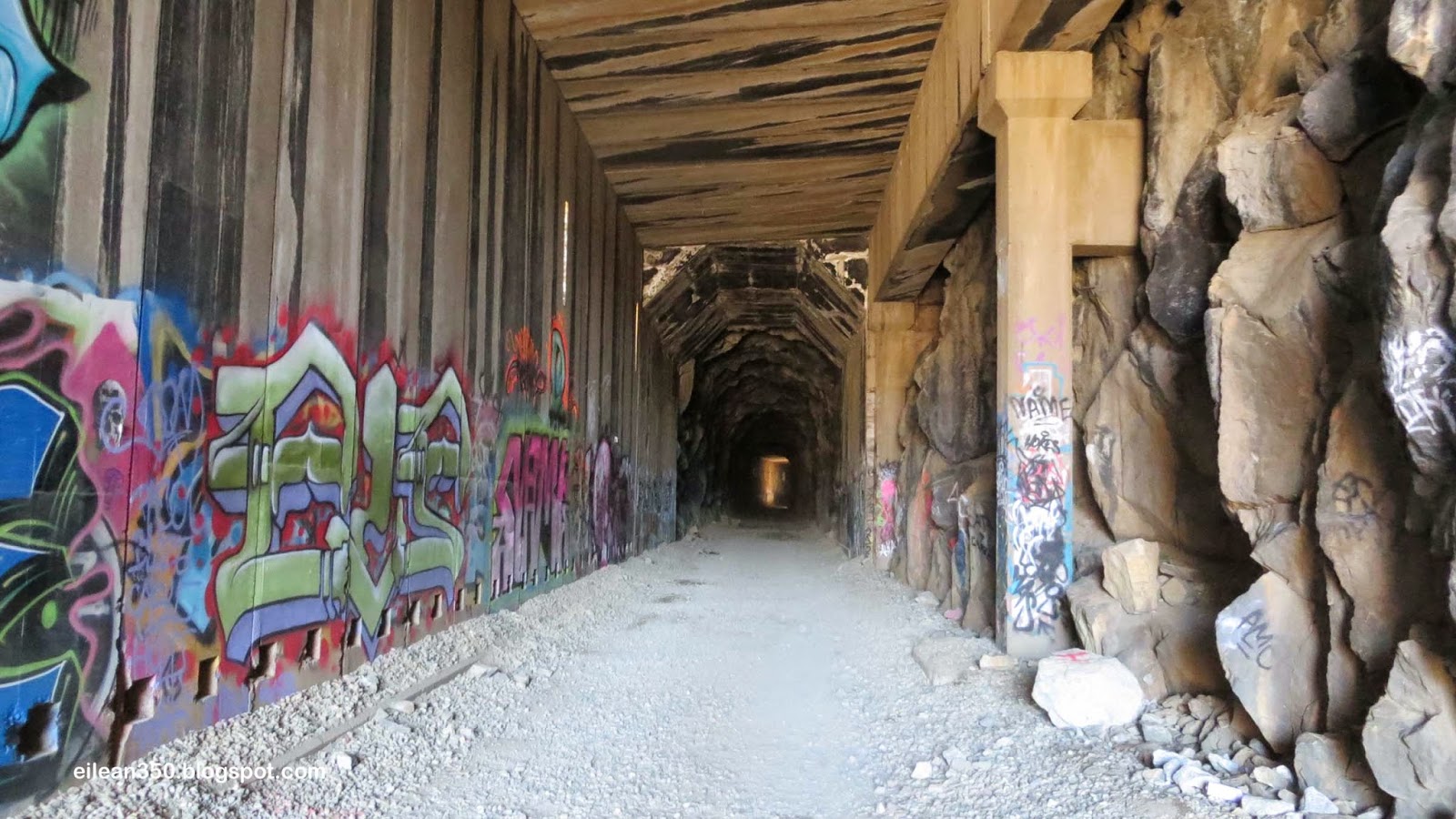 Looking down to where the truck is parked.
Can you see it in the center of the photo? A view of the snow sheds along the mountain face. Almost 40 miles of snow sheds where constructed to allow the trains to traverse the pass.
Today they are made of concrete but are still needed.

You can now traverse Donner Pass by Auto in a matter of 30 minutes or so...
But in winter the snow still can shut down the pass as the snow piles up.

Still the voices of those early pioneers and then railroad builders
are not too far under the surface.

Its hard to be here and not hear their cries.

Later - one of the survivors - 12 year old Virgina Reed wrote to her cousin back east:

"Oh Mary I have not wrote you half of the trouble we've had,
but I have wrote you enough to let you know what trouble is.

But thank God, we are the only family that did not eat human flesh.

We have left everything, but I don't care for that.
We have got thru with our lives.

Don't let this letter dishearten anybody.
Remember, never take no cutoffs and hurry along as fast as you can.