Go RV'ing
Irene does not want to go away without a fight.  Its now 1640hrs and the winds are still 35 - 45mph with higher gusts and the forecast calls for up to 65mph till midnight.
By the time this thing is done it will be 36hrs or so with Tropical Storm force or greater.  I imagine the gang in Beaufort is saying enough already.
I also received a picture a while ago of a tree on our property that is coming down.  It is actually leaning at a 45 degree angle on some other trees.  Unless it blows down tonight I will have falling that to contend with when I get home.  If it does come down however - I think it might block the driveway!  Looks like I need to invest in a chain saw again.
Meanwhile out here in Blue Ridge Central, it was a beautiful day in Paradise.   After hours of watching CNN and the Weather Channel - we started to get "Trailer Fever" so we decided to get out and do some exploring.  We took a ride up a piece of the Blue Ridge Parkway, and a leisurely drive to Boone, NC the home of Appalachian State University. 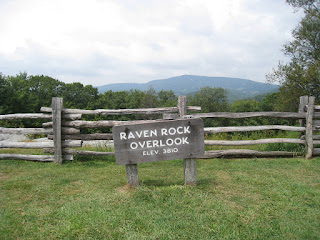 the drive along the Parkway is fairly scenic but today was kind of hazy as are many days here in the east. 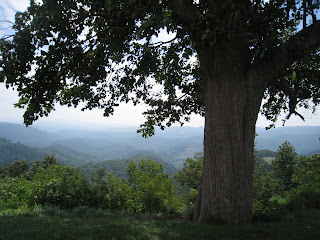 Tomorrow the party is over and we head back to Beaufort to assess the situation and deal with whatever we have to deal with.
With over half a million people in NC without power and us living off of the beaten path - I'm planning on not having power for a good while (maybe a week) so we will be living off a generator in the camper.
It's all good...  the fridge and freezer are packed, we have plenty of LPG to power the fridge, and alot of Gin and ice....   Cocktails anyone???
That said - I promise to update you and let you know whats going on......
but perhaps not tomorrow.
Posted by GregK at 3:02 PM