We are wrapping up about 3 weeks in the Cotswolds Region of England
and I think its safe to say that we have a winner!

Unless Cornwall turns out to be something really super special,
it is going to be hard to beat the Cotswolds for its beauty and pure idyllic charm.


For 15 nights we have called the Gatehouse of Sudeley Castle our home.
And it really felt like home.    We did not want to leave!
Our friends Mark & Karen from our Eastbound Crossing on the QM2 came to visit with
us for 3 nights.
We had a nice patio at the back of the gatehouse with a peaceful view and
nothing but sheep as neighbors.

Our first night, the 4 of us went to one of the local pubs for dinner.
One of the great things about the Gatehouse was that there were several pubs and restaurants
and a great village, within about a 10 minute walk.

The next day we walked further into the Sudeley Castle Estate, and took a tour of the
Castle and the gardens.
The castle is open to the public, and one of the perks about renting the gatehouse is that we
have full access to the Castle and grounds free of charge.


The Castle dates back to the 14th Century and earlier.
It was owned by King Henry VIII and he and Anne Boleyn spent time here plotting the
dissolution of the monasteries.

It is now owned by Lady Ashcombe and her children who live in the castle.
It is open to the public from the spring into the fall.
We had a lovely fall day to explore the castle gardens in the rear of the castle.

The gang.
Behind us lie the ruins of the great hall, and beyond that, the surviving part of the castle. 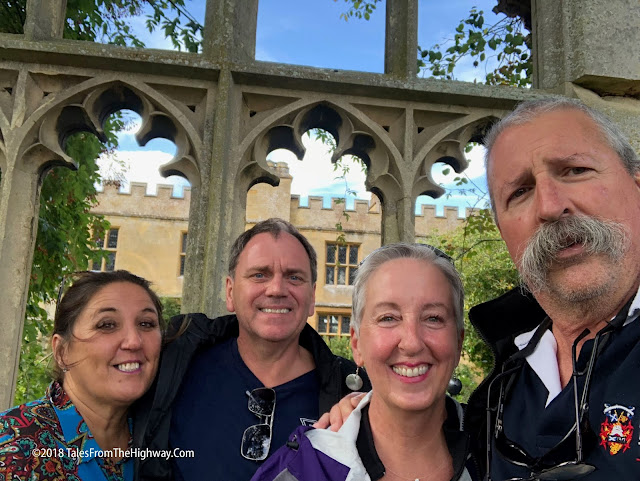 King Henry VIII's 6th and final wife, Kathryn Parr, survived him, and upon his death
in January 1547 took up residence in Sudeley Castle.

Henry and Jane had a son, Edward - who became King Edward VI
That made Thomas Seymour Edwards Uncle.

When Kathryn and Thomas married (about 5 months after Henry died,
if I have my family tree right,  that made
Kathryn, Edwards Step-Mother and Aunt
and Thomas his uncle and step-father.

Got all of that?


Kathryn and Thomas got busy and soon she was pregnant.
Unfortunately Kathryn died 8 days after giving birth to a daughter Mary.
And.. Thomas Seymour fell out of favor at court and was beheaded for treason about 2 years later.

Kathryns tomb is in St Marys Chapel at Sudeley Castle.
She is the only English Queen buried on Private land.


The Sudeley Castle Estate is about 1200 acres and we had all of it to roam freely!
Below is the road leading back from the castle, to the Gatehouse
which peeks out between the trees on the right.

Not far from our Castle home was the delightful town of Winchcombe.

Winchecombe was large enough to have the essentials, but was not overly touristy so
we were always able to find a free table at a pub for a pint. 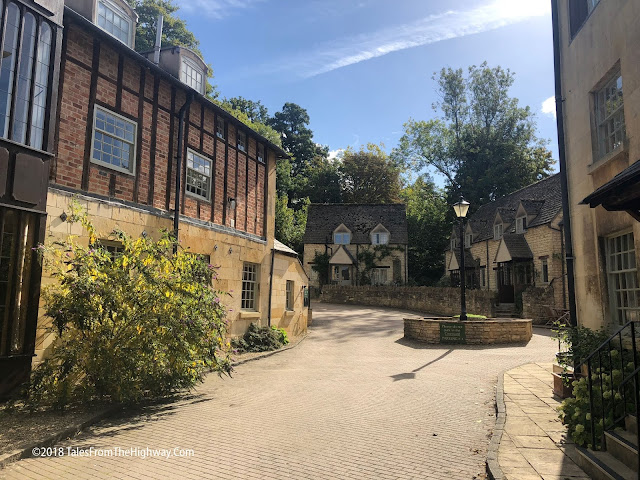 Above are the other cottages located on the Sudeley Castle Estate.
Special about the gatehouse is that it sits all alone with lots of room around it.

Like all of the English Countryside that we have visited...
The homes and farms here are all very clean and well manicured.

The public footpaths are an interesting English feature.

Since way back, the land has been crisscrossed by footpaths.   These footpaths run thru
farm fields and private land on rights of way.   Open and close the gates and you are free to proceed.
Just don't let your doodles chase down the sheep or the farmer can shoot your dog!

These are the Almshouse in Winchcombe.   Low income housing.
Occupants could be a family or elderly.... the only requirements are a certain income
and "good moral character"
Midway thru our stay at the Castle we had visit from other shipmates of ours.
Craig & Vicki and their two dogs Belle & Poppy.


They are another great couple that we met on our Eastbound Crossing.
The best part of it is that we will be sharing the Westbound back to the US with them too!

Craig & Vicki introduced us to a proper afternoon tea on the verandah.

We had learned that on Weds nights, the local Church of England Church (St Peters)
has practice sessions for the bell ringers.
They invite the public to come and see and hopefully can recruit a few to help out
as I guess its getting harder to find people who are willing to devote the time.

So on Weds night the 4 of us set off into town and up the steep spiral staircase into
the St Peters Bell tower to observe and learn about ringing the bells.

Finally up to the ringing room. 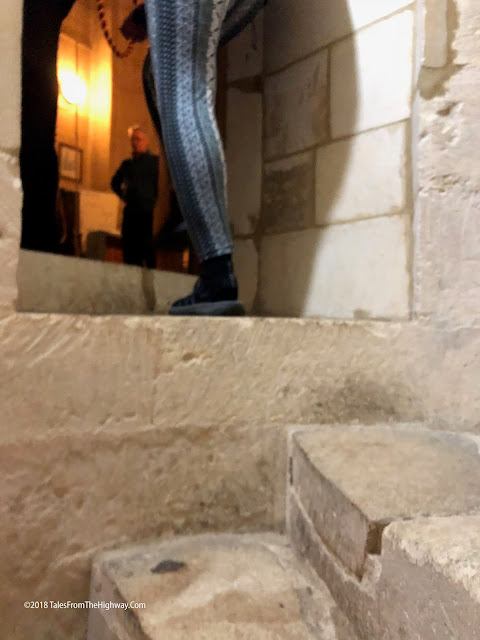 There are 8 bells but on this night they were using 6.
First they must ring the bells, getting them to swing in ever wider arcs until they get them
to stop upside down.   It is from this upside down position where they can ring the bells and
stop them at will.


Returning to the castle we have the friendly welcoming committee.

One of our favorite things was to take drives thru the idyllic countryside.
Each day it seems the scenery changed as the trees and their colors changed more and more
in anticipation of fall.

I've found the colors here are not as dramatic as in the US,
but the countryside makes up for that shortfall and then some.

Just a special place on this earth.

Another day trip was to the nearby village of Bourton on the Water.

Another storybook location in a beautiful place.


Spending time here is pleasing on so many levels.
There is of course, the gentle countryside.
The beautiful scenery seems to calm and nourish the soul.

Then there are the people.
The English are a kind and gentle lot.
Polite almost to a fault.
Always with a smile and a cheerful hello.
Its a super dog-friendly country.
It is easy to feel at home here.

Before we got off of the ship I had asked Craig for some driving tips.
One thing he mentioned is that the roads are much narrower than in the US.

When I first hit the road I found out immediately what he meant.
At first it was a very stressful experience.

Driving on the left, trying to judge clearances from the right seat,
and not clipping the cars or the curbs on these tight roads proved to all be challenges.
I missed the cars but not all the curbs.

Once I became accustomed to it - I started to really enjoy these roads.
You must drive them.

But you are paid back for that with something that is hard to put a finger on.
The Germans call it Farfegnugen.

Meanwhile there are the Pheasants....    I mean - they are everywhere.
Scurrying about - they remind me of Roadrunners.

They are not in any particular rush to get out of your way
and many of them pay the ultimate sacrifice.

We fortunately missed them but one barely managed to
spring into the air and over the car as we rounded the corner.

September - having turned into October - our 15 days at Sudeley had quickly come to an end
and it was time again to pack up and move on to our 30th home of this trip.


On the way to this new home - we made a side trip to visit the ancient stoneworks at Stonehenge.
To get to the stones, you must walk about 2 miles from the parking lot up a paved road,
or alternatively thru the fields.

There is an option to take a shuttle bus - but dogs are not allowed on the bus and
we wanted to take the Doodles, so by foot it was.

While the main attraction is the stone monument below - I did not realize that it is a large complex
of several hundred burial mounds, ancient earthworks, and even roadways.

We arrived at our new home - a converted barn on the side of a hill with a great view overlooking
Bath England.  It is part of a whole little village perched on a mountain top.
Very cool indeed!

We only had two days on the ground here, and with that short a time I decided to take
one day to get caught up on work and stay home.
Then on Friday - our second day we would see what we could.

The view from our mountaintop.   To the right is the barn next to our home.

Looking down our road - our house is the second one on the left.


Early Friday Morning we took a drive to see the village of Castle Combe.


Castle Combe has been used as the setting for numerous movies such as Stardust in 2008,
The Wolfman in 2009 and Steven Spielberg shot scenes for War Horse here in 2010.

Part of the fun in any Cotswold visit is the drive getting there.
Below is one more video.
This time we are driving down a single lane road named "The St"

Right after the video above ended - we arrived in Castle Combe.
We parked at the car park at the top of the hill, and walked back down into town.

The little "square" in town where the road forks.

The village is just so beautiful and peaceful.

We drove back on the same road we came in on.   Named  "The St"
If you've ever wondered where Tiddleywink was located...
Wonder no more.   We found it!
Finally back home, we put the Doods back in their corral.
They are getting some practice being in jail once again as its only 12 days till we
are back on the QM2 and they go into the Queens Prison. 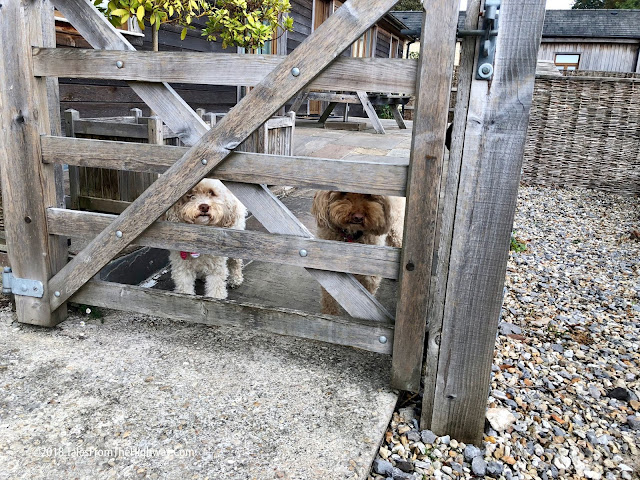 Tomorrow we are back on the road for a 3.5 hr drive
Next stop Newquay in Cornwall where we will hook back up with our friends
from Switzerland and begin the 12 day Bon Voyage Party.

The house there is on the cliffs overlooking the estuary and should be quite luxurious.

Hope you are enjoying riding along with us.
If so...give us a shout out.   We love to hear from you.