This is going to be a bit of a rushed post.
We've covered a lot of ground the past 11 days or so and time is running out on my
ability to get this out before we are back onboard the Queen Mary headed West.

After leaving Bath, we headed south west to the end of England, where it juts
out into the North Atlantic.
This area of the country is called Cornwall.

Our friends from Switzerland flew into London and drove over to Cornwall to
spend our final days in Europe with us.

This would be our third, and final, visit with them this trip and the last time we
would see each other until.....

We stayed at a very large home (5 beds - 6 baths) situated in the side of a hill overlooking
an estuary on the Pentire Peninsula in Newquay.

It was a beautiful place for all of us to spend 8 days together.

Its a huge surfing area as the large North Atlantic Swell rolls in from the West.

One day we drove north up the coast to Padstow, England.
Along the way we stopped to admire the view at the Bedruthan Steps

It reminds us a lot of the Oregon Coast. 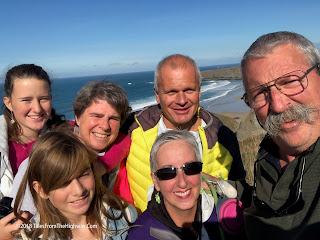 Us and our very well traveled Doodles.

Another stop just outside of Padstow was Prideaux Place, an Elizabethan Home dating
back to the 1500's.

Unfortunately the house was not open but the grounds were - so we had fun
checking out the estate on a fine autumn day.


The Doodles in the Rose Garden

There was a fair amount of large game wandering out the grounds.
This big buck took particular interest in the Doodles 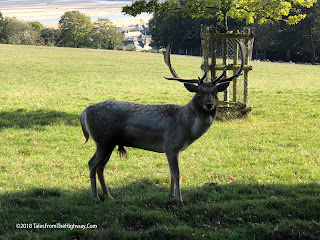 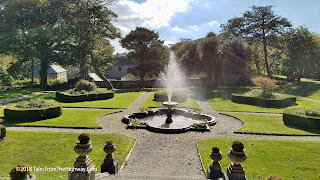 We stopped in Padstow, a quaint village along the coast north of Newquay 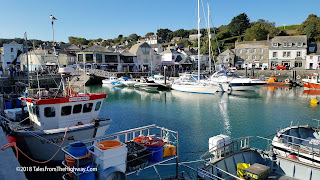 We had lunch in the Old Custom House Pub 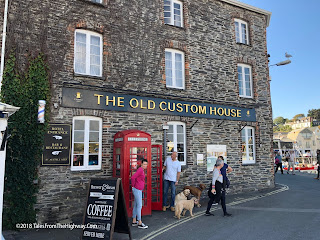 
Another days trip was to Lanhydrock House - a Victorian Era home with sections dating back
to the 1600's - now owned by the National Trust. 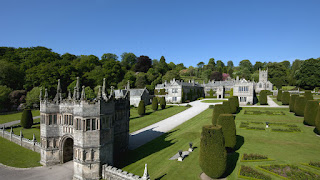 The kitchen and other cooking areas were massive.

A view thru the windows out to one of the gardens. 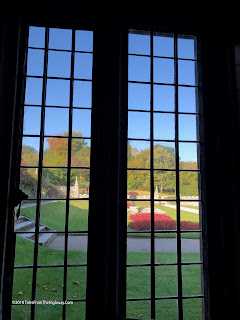 The Gallery.
35 meters in length, the ceiling contains 24  plasterwork panels depicting stories from the Bible.
The Gallery is a part of the house dating back to the 1600's 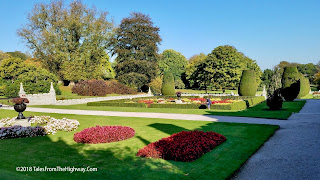 Walking back up the hill to the carpark. 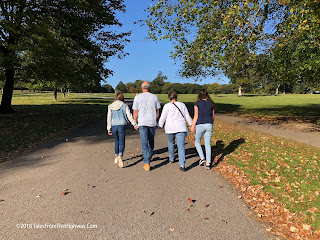 Another fine day comes to a beautiful conclusion. 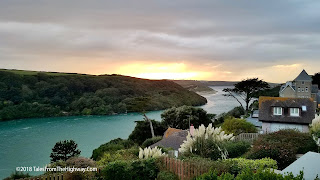 As our time is running out and its now just a few days till we get back on the
ship - we took the dogs to the self service doodle wash in Saltash.

The girls came along to help.

Another days trip was to St Mawes Castle on the southern coast of the Cornwall Peninsula.

The castle was built by Henry VIII to guard the entrence to the port of Falmouth.
Unlike many castles which were a place where Royals or Nobles would live,
St Maws was purely a military installation.

One of the gun Batteries.

The Castle is in very good shape.

Just down the hill from the Castle is the quaint harbor side village of St. Mawes.

Another day the Gang went to the Eden Project.
On this day I stayed behind as I had a bunch of work to get caught up on prior to our
travel across the Atlantic. 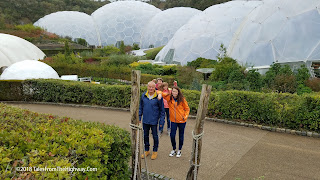 The scale of the biomes are evident by looking at the people on the platform
viewing location below the roof. 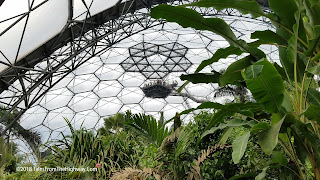 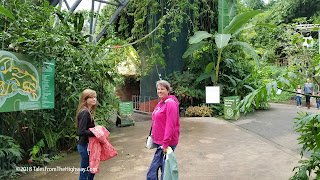 Before we knew it - our 8 days in Cornwall was over and we were down to only 3
more nights left in the UK.

For two of our final nights I had selected a special location.
Thornbury Castle.

The castle - now a hotel - is considered one of the finest surviving examples of
Tudor age architecture in England.

It was started in 1511 as a Tudor Country Home and as such had minimal defensive
features built into the home.

The original builder - Edward Stafford, 3rd Duke of Buckingham, was beheaded in 1521
for Treason by King Henry VIII (his distant cousin), and the
home was confiscated by the King.

Henry and Anne Boleyn stayed here for 10 days on thier Honeymoon in August 1535.

Our room in the castle. 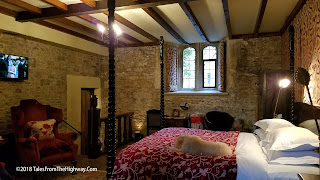 A popular venue for weddings, the castle has several dining rooms.

Another dog-friendly location, the doodles joined us for breakfast. 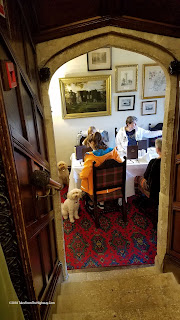 The castle vineyard is showing its fall colors. 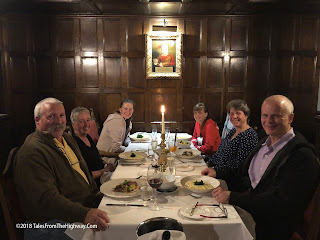 Thornbury is an ancient market town and its status as such continues today.

There are many restaurants, pubs, and coffee shops in town. 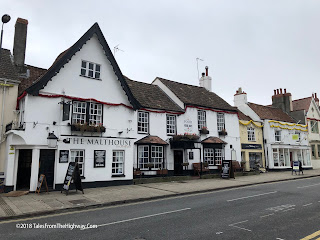 The doodles have become a fixture in the pubs in the UK.
Always great travelers - they have really added some new dimensions to their
repertoire this trip and take everything in stride.

It's now Oct 17 early morning here in Thornbury.
Today marks 5 months since we set sail from NY on the Queen Mary 2, and
tomorrow we will again board for our 7 day crossing of the North Atlantic
back to the New World and some exciting new adventures in our lives.

Soon we pack up and head to the Holiday Inn Express in Southampton
where we will spend our final night on this side of the pond.

Perhaps I'll get to send a quick update after we board the ship,
if not, then we'll see you on the other side.

Hope that you all have enjoyed riding along.