Color, Fire, & Light - Back in the Yukon

What a week it has been!
We've had beauty, excitement, and even some cosmic entertainment!

But before I get ahead of myself...

We had a change of plans when we left Tok.
Rather than taking the Top of the World Highway back to Dawson City,
the weather forced us to plan B which was to head down the Alcan to Kluane Lake.

The TOWH - especially the Alaskan side is a narrow dirt road with steep dropoffs,
and in rain it gets slick.  I was hoping that the rain would let off early enough for the road to
dry up some but that was not the case.   It had been raining for days and the rain was forecast
to continue for a couple more.  Plus - Dawson was forecasting 10 straight rainy days and after the
normal weather we had (rain) on the Alaskan Coast....  it was time for us to enjoy some dry weather.

Staying on a more southerly route the weather was delightful.
Brisk temps and strong fall breezes. 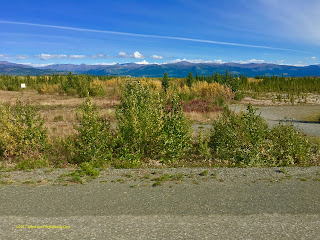 The stretch from the Yukon/Alaska border to Burwash Landing continued to live
up to its reputation...    Even though I was constantly scanning the road ahead, I missed seeing
on big dip (sunken frost heave)  in the road ahead and upon driving thru it
both Kate and I went airborne against our seat belts.

Fortunately we prepare for travel pretty well, and not too much wound up on the floor in the back.

By 3pm we were back at Congdon Creek Yukon Govt Campground...  one of our favorites!
Dry camping and the lateness of the season meant only a few other people were here.
Just the way we like it!

A nice site on the lake, free dry firewood, and nice fall temps...
The perfect recipe for a campfire! 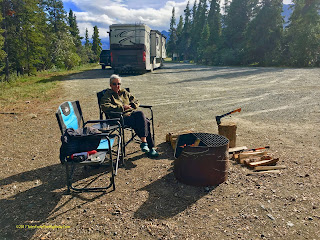 Kluane Lake - right behind our campsite. 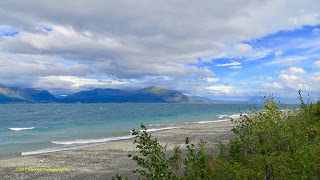 You can see the lake behind the trees beyond Kate. 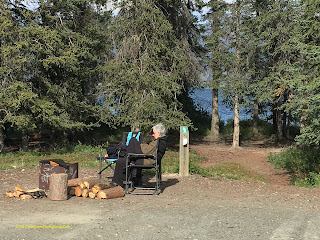 Congdon Creek is perfect in all ways but one...
My list of requirements:

1)   Good internet connection for work.
2)   Good Sunlight on the Solar Panels.
3)  A clear view of the Satellites for TV

At Congdon we have all but number one....   so I have to drive 10 miles each way up
to Destruction Bay - a very small village on the lake - where they have great LTE but only
reaches out about 2 miles in either direction.

So a couple of times a day I make the round trip to get work up - and down - loaded.

My drive to work: 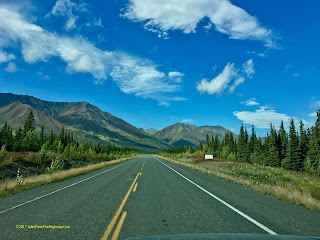 Kate would make the drive with me to get caught up with friends and to
see the fall colors which seem to be brightening up by the day. 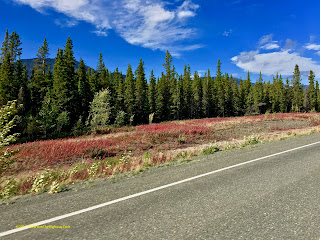 The Aspen, and birch were changing colors more and more each day. 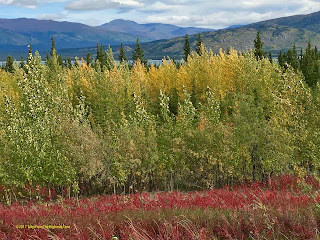 The carpets of red plants along the roadside were stunning. 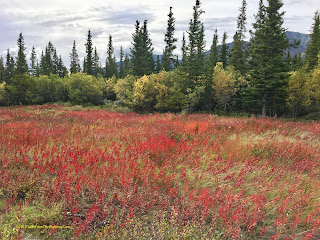 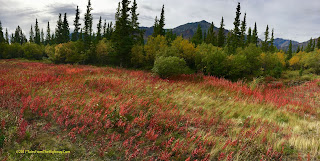 Fire in the Hole!

On Thursday about 4pm I see a woman come running down the road towards us
and she starts to frantically knock on the door.
She explains that the roof of the cooking shelter was on fire and did we know what to do.

Mind you...  the only water in the campground is a hand pump or the lake.

Adding to the urgency of the situation, he wind was blowing very strong
and the shelter has a cedar shake roof.

So I grab my foam fire extinguisher and jump in the truck and rush over there.
The cooking shelter has a metal wood stove and the chimney goes thru the roof.

Upon arrival I see the roof around the chimney is burning and more smoke on top of the roof.
What was happening was a chimney fire that had overheated the chimney and set the
roof on fire.

Being an ex-volunteer fireman, I knew exactly what needed to be done, and everyone present
was very anxious to help so we all got to work with our limited resources.

I told one person to put the fire out inside the stove while I hit the inside of the roof with my
extinguisher to put out the visible flame that was peeking out between the roof slats. 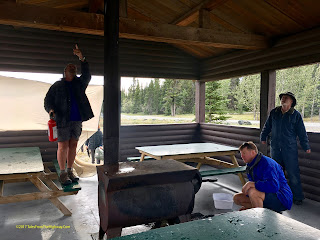 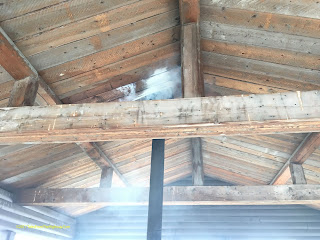 The fire was up under the cedar shakes on the roof however so this was going to take more
than just a fire extinguisher.

I was the only one who knew the area so I told them I was going to drive to
Destruction Bay and summon the fire dept.   While I was gone, I suggested that they get up
on the roof and peel back shingles and try to get as much water up there as quickly as they could
to try and prevent the shakes from catching fire any more than they were 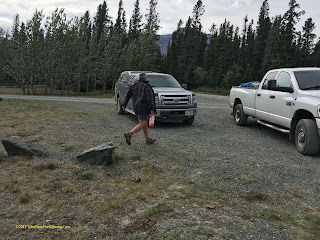 On the way to Destruction Bay I learned that my truck can do about 110mph 😀
The Crew back at camp got up on the roof and using the hand pump and dish pans of water,
the got the fire knocked down to a smolder. 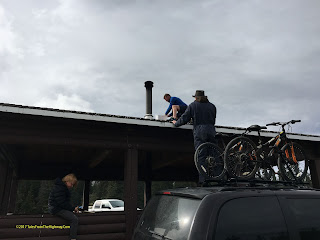 I went to the Yukon Road Dept Garage in Destruction Bay and reported the fire to them, and then
turned around and rushed back to camp.
I did not know if the fire was going to continue to grow or if they would be successful
in keeping it under control..

I arrived back about 15 minutes after I left and the fire was mostly out, and the roof was smoking.
We kept putting water on the roof and peeled back more shingles and about 1/2 hour later
the fire crew finally showed up  (from 20 miles away).
They proceeded to pump water on the roof and finally got the smoldering remnants
knocked down and averted a crisis. 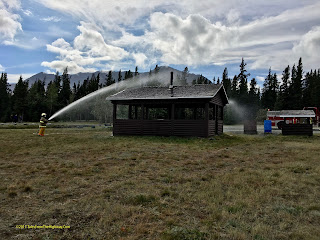 Considering the wind, the dryness, and the construction of the shelter,
this could have turned into a mess real quick.

Our little neighborhood of an American, a German, 2 folks from Australia,
and 3 Canadians all pulled together and saved the shelter. 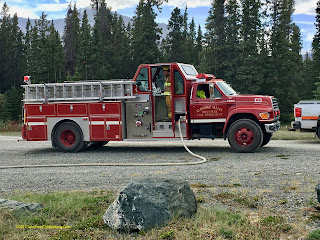 Quick action by everyone there prevented the fire on the roof from spreading and saved
the shelter - and perhaps the whole campground. 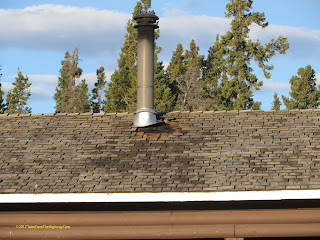 Later that night we saw something that we have not seen since April....
the Moon! 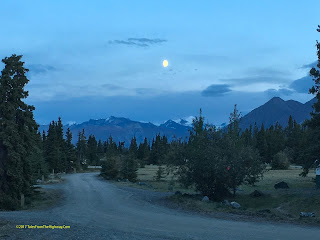 One more goal of ours this trip was to try and catch the northern lights.
The general rule around 60° North is that they can start to be seen around the
end of August.

I have a website that I follow to monitior solar storms and I told Kate that we had a good
chance of seeing the lights tonight if the sky was clear and the moon set soon enough.

At 3am I got up and started to look outside.
It seemed awful bright and I thought that it was not going to happen.

I looked up at the clouds.
They where thin and translucent, but seemed to be illuminated by the moonlight

As I rubbed the sleep from my eyes however, I realized the moon had set.

Why then were these clouds so bright?

As I looked at one of the clouds...   it suddenly disappeared!

I realized all the clouds were appearing, moving, disappearing, changing shapes....

And just like that - I realized that I was looking at the northern lights.
I woke Kate and we sat up for a couple of hours watching the show.

At times it looked like a tattered curtain of light draped down on the horizon...
At other times it was streaks of light rushing across the sky.
At times clouds.

So bright it actually was slightly illuminating the ground.

It was all a white or very light green color.
Not the colors like I've seen in pictures, but impressive none the less.

OUTSTANDING!
WHAT A SHOW!
Now I want more!

On Friday of Labor Day weekend we said good bye to Congdon Creek.
I want to spend some time in other places and still want to try to get to Hyder before
the salmon run stops so we can see the Grizzlies feed.
It might already be too late.

Before we left however, the Yukon Park Ranger stopped by twice to thank us for our
part in saving the kitchen shelter.
He was truly grateful.
I told him that we love it here and were glad that we could do our part.

Headed south on the Alcan along Kluane Lake.
Its big country out here! 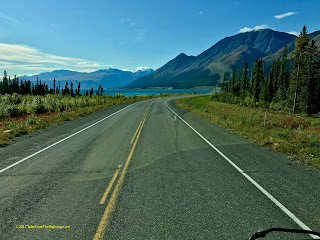 We stopped at the south end of the lake to take a few photos of the colors.
This is a beautiful part of the planet! 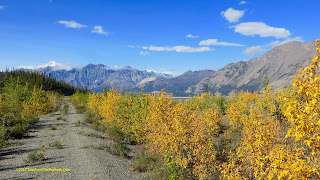 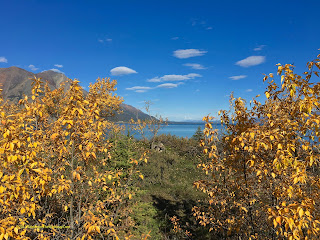 Enroute to Whitehorse, we stopped at the Canyon Creek bridge to take a look.

Sitting right next to the Alcan, we've passed it a few times and this time
I wanted to stop and satisfy my curiosity. 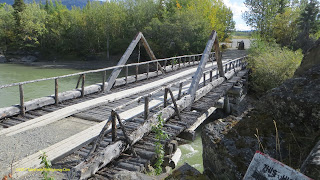 Originally built as part of a wagon road from Whitehorse to the gold claims
around Kluane Lake, its been restored and preserved. 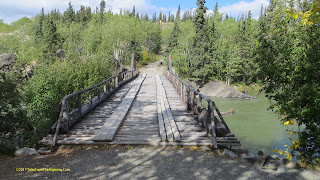 Lover elevations here than Kluane, the leaves are not as far advanced but
I'm fall is right at the door. 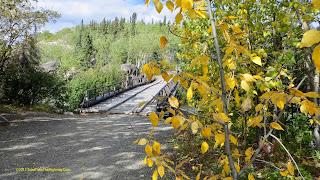 We'll spend 3 nights in Whitehorse to let the Labor Day Weekenders clear out
of the campgrounds and then we'll continue our trek southward.

We plan to take the Cassier Highway so will have almost no internet
during that stretch.

All written in pencil of course.
We are free-range chickens.

After that - we'll be back in "civilization" and only a few days
drive from the border. 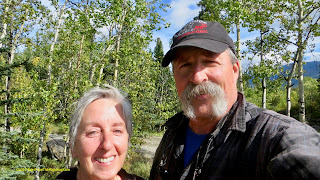 Hope you enjoy the ride.
See you down the road.