Since our last post we've put some additional miles under the bus and its time
to play catch up with the blog.

Leaving Stone Mtn Provincial Park and our wonderful Northern Lights behind,
we have traveled south back into the US via the following:

The map below shows the route and stops. 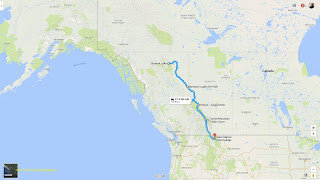 (Remember to click on the pictures to enlarge them)

Leaving Mirror Lake at the crest of the BC Rockies, we descend slowly out of the Rockies
as we travel westward towards Fort Nelson, BC.

Along the way we again stop for Cinnamon Buns at Testa River.

After Fort Nelson, the Alaska Highway turns southward and slowly we leave the
Boreal Forest behind.

The colors of early fall still peek at us.

A 300+ mile day put us in Dawson Creek where we spent the night at the
Northern Lights RV Park.
We've stayed here a couple of times before.
Nothing fancy but it works for the night.

The next day we are back on the road southbound to Hinton, Ab

Since we were unable to find a single open campsite for a few nights at Jasper National Park,
we stayed at the Hinton-Jasper KOA about 40mi east of Jasper.

Our route from Dawson Creek to Hinton, took us south from Grand Prairie, on AB 40
AKA the Bighorn Highway.   A scenic and fairly remote route.

North of Grand Cache, the highway travels thru some hilly country and passes
many natural gas processing centers.
The road is quite dirty from the trucks that constantly enter from the dirt roads to the side.

In dry weather its no big deal, but when it rains - as it did today - the vehicles get
filthy and covered with mud.

South of Grande Cache the road flattens out and you leave the mud and dirt behind.

We arrived at the Hinton/Jasper KOA covered with mud.

This KOA has alot of pipeline workers in residence and about 5-6am you would hear all of them
headed to work - most driving diesel pickups.
Since I'm already up working its not a problem. 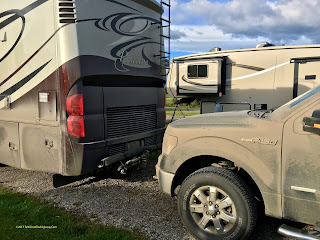 We made it all thru the Yukon & Alaskan construction zones without a chip in the windshield.
We were not so lucky on the Bighorn Highway however.

A passing truck chucked up a rock and we got a bullseye about the size of a dime.

I repaired the bullseye chip in the windshield the next morning before it had a chance to spread.
Since it cures by UV light,  I needed to shade it from the sunlight
during the process till it was ready to cure.

Some cardboard and paper bags did the trick.

Our last trip to Alaska had me repairing 5 hits along the way so I consider just one to be a bonus.

I found one of the best self serve RV washes ever in Hinton.

The picture below is just one of the 3 bays.
The other two bays also had catwalks on each side, from where you could clean the roof.
The bays were over 100' long!

Each bay had several power washers and foaming brushes on
both sides so Kate and I were able to each take a side of the bus and get the deed done
in about 20 minutes.

Mud removed...   we headed west back into the Rockies heading towards our next destination...
Banff National Park.

Our route took us south on the Icefield Parkway.
We've done this drive a couple of times northbound and this was our first heading south.

As we climbed to the Columbia Icefields the environment changed to Alpine
and the colors of the Alpine Fall increased.

South of the Icefields we again descend to lower altitude into the forest.
Soon a construction stop has us parked for 20 minutes and I got out to stretch
my legs and take a photo of our newly cleaned bus. 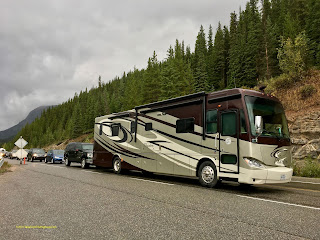 Below was our view while waiting for our turn thru the construction.

Even on a cloudy or rainy day - the view along the Icefield Parkway is magnificent.

Further south on the IP we approach the headwaters of the Bow River.
The Bow River flows thru Banff National Park and into Calgary, Ab.

We now spent a week in Banff National Park in an Electric only site.
They have full hook up sites but none were available for a whole week.
It seems all of Canada was taking advantage of the last of summer.

While there -snow started to coat the peaks not far above us.
We even had snow flurries in our campground.

One of the great things about this RV Lifestyle is the friends that we meet along the way.

When we decided to change plans and head to Banff, I texted our RV Buddies
Rob and Pat who live in BC to see if they could meet us.

Sure enough...  they made the 6 hr drive to Banff and we spent 4 days together.

Having spent a month or so boon-docking on Lake Roosevelt Az a couple of winters ago,
they fell in love with Gracie & Lucy and decided to get an Australian Labradoodle of their own.

So (L-R)  Lucy, Gracie, and Ophelia.
The 3 Doodles get along great!
You don't even know that three dogs are in the bus! 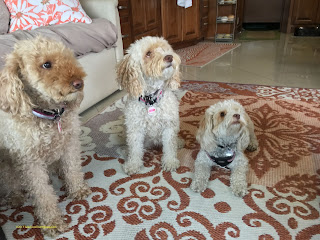 One neat feature in Canadian National Parks are the Red Chairs.
Strategically placed with a great view...   just find a red chair and enjoy.
Kate and I have been making a collection of us sitting in Red Chair Photos
and now have them from the Maritimes to the Rockies.
We spent a nice Sunday afternoon visiting the Banff Springs Hotel.
One of the Great Railway Hotels built in the early 1900's by the Canadian Pacific Railway
along its routes to stimulate passenger traffic.


The views from all the rooms and terraces in any direction are stunning!

Soon our week in Banff was over and it was time to put a bookend on our Alaskan Summer.
Rob & Pat headed to Kimberly and we headed back to the US.

Leaving Banff I took a picture of Rob leading the way out of the campground.

We first headed north on TC 1 to Castle Junction, where we would catch
Route 93 west, then south.

The drive thru Kootenay National Park which adjoins Banff NP is beautiful.
This whole immense area of the Canadian Rockies is just stunning!
There are 6 National Parks in about a 40 mile radius in this area.

Soon Rob and Pat cut off to Kimberly and we continued south on BC93.
We stopped at a Cardlock in Cranbrook, BC to refuel, and
then pushed the rest of the way south.

Crossing the border into Montana, BC 93 becomes US 93 and travels thru
thick pine forests south to Whitefish, Mt.

Our destination for the next 4 nights is the KOA in West Glacier.
It is beautifully redone.  They were rebuilding these sites 3 years ago when we were here.
Its amazing how much the trees have grown since them.

This section of the park is like a garden.
Quite pretty.   We have the place almost to ourselves.

If we drive 90 miles around to East Glacier we can drive the road 20 miles in from that side
up to Logan Pass.  We might try that drive tomorrow however today part of the
open part has now been closed due to early snow....
We just can't win!
Perhaps one of these days we'll make it.

Snow dusted the mountains above us here in W. Glacier too.
Winter seems to be following us as we drive south. 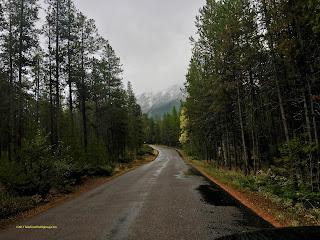 Next is Coeur d'Alene Id for a few nights,
Then over to Seattle for a bit,  then down to
McMinnville, Oregon where we will park for 5 weeks at the Old Stone Village.