Our 10 day stay at Deer Creek State Park has come to an end.
Boy time flies.
We enjoyed our stay here but once again - it was time to move on.

Our final morning at Deer Creek dawned clear and cool as the early morning sun
painted the slope of Mount Timpanogo for one last time.

Our northward migration continued - the days destination was unknown.
Our next stop was open...   to be decided as we traveled.

We first thought perhaps we'd stay the Pocatello Idaho area, but as we drove we
decided to push on further to Butte, Montana where we would spend
3 nights and check out the areas rich history.

Shortly after our departure, we hit a massive traffic jam on I-15
heading north in the Salt Lake City area.

We spent about an hour or so in bumper to bumper traffic,
and it turned out to be a long driving day, but when we arrived to the peace and
quiet of our next stop it was all worth it.

Nestled in the valley west of Butte, the Fairmont RV Park is conveniently located
to visit the area and seemed to be the nicest RV park in the area.

Full Hookups with 50 amps - nice grassy sites, good Cell coverage - and located
right next door to the Fairmont Hot Springs...  this will be a good place to spend a few nights.

Butte Montana is (was?) Copper Country.

During the Mid 19th thru the early 20th century, the "Copper Kings" made their
massive fortunes and built opulent palaces in town as they mined the earth
and competed with each other for the largest slice of the pie.

As a testimony to these riches, Butte has hundreds of
Victorian "Guilded Age" homes and is the largest
National Historic District in the US.

One of the homes - The Copper King Mansion - is currently being operated as a
bed and breakfast as well as a living museum and is open for tours several times a day.
Built between 1884-88  by William A Clark (one of the richest men in the world at that time)
it is an amazing place to visit.

We arrived early for our tour so we took an hour to walk some of the nearby streets.

Butte is an interesting place and seems a place of contrasts,
and perhaps contradictions.

The downtown area is spread over dozens of square blocks and almost all of the buildings
are of late 1800's early 1900's vintage.
When the copper market collapsed, the industry slowed down and so did the growth of Butte.

First,  in 1955 Anaconda Copper Co abandoned below-ground mining
in favor of the cheaper open pit method.
They dug this pit about 1 mile long, a half mile wide, and
almost 1,800' deep!

Then in 1982 they (now owned by Atlantic Ridgfield) closed the pit,
and turned off the water pumps that kept the pit from flooding

It was then that the damage began.

Since then the pit has been steadily filling, the water turning very acidic
and leaching heavy metals like arsenic from the surrounding rock.
The water has the same acidity as lemon juice and is now
within 150' of the natural water table.

The water is so toxic with dangerous chemicals that birds that land in it die!

In 1996 hundreds of Canadian Geese died after a large flock landed and in
2016 thousands of Snow Geese perished.

It is estimated that without further intervention that the water level will reach the
water table by 2020 and these toxic chemicals will enter the surface water system.

It is against this backdrop that present day Butte moves forward.

Now it is a mix of lovely turn of the century architecture,
and an unsightly (and dangerously polluted) open pit copper mine.

Opulent mansions - and one of the largest superfund sites in the US - The Berkeley Pit.

Look in one direction and you will see beautiful mountain vistas - yet look in another and you see
an entire mountainside - stripped of vegetation - taking up much of the view eastward.

Butte is different from other mining towns  in that much of the mining
took place in town - in residential areas.

Anaconda Copper bought up much of the eastern side of Butte and demolished the homes as
the Berkeley Pit continued to expand in size.

Throughout town are the remains of head frames which stand above the now
closed underground mines.

It seems a place of great contradictions.

Arriving back at the mansion at our appointed time - we had our guide "TJ" to ourselves
and had a personal tour of the mansion just for the two us.

TJ's knowledge and love of the place was evident as he described all the details
in an almost 1hr non-stop informative narration.

It began inside the heavy wooden entry doors in the reception room. 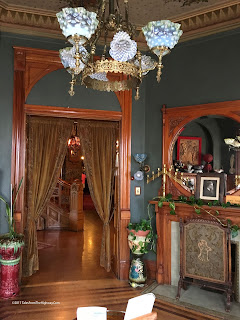 The current owners - The Cote Family - purchased the home in 1953 with the goal
of preserving it for future generations.

One of the Cotes still lives here.

It is amazing to visit a place like this where you can actually sit in the chairs and walk about the
home like the Clarks would have over 100 yrs ago.

Mr Clark was a man ahead of his time.
Having founded the Butte Power Company and water company among other ventures,
he not only plumbed the light fixtures to operate on gas, but also electricity.

The main staircase took over 4 years to complete.
The wood carvings are beautiful.

Hand laid plaster designs called "combed plaster" adorn the walls thru out the mansion.
The flickering light of the gas lamps combined with the combed plaster
gives creates the illusion of water flowing down the walls
. 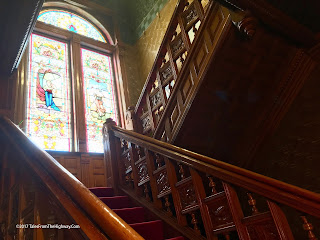 One of the bedrooms - now also a guest bedroom for the B&B guests. 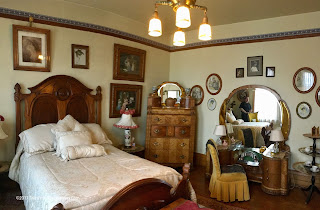 Even the doorknobs...
Every single one in the house in unique and no two  are alike.
They are even different on opposite sides of the doors. 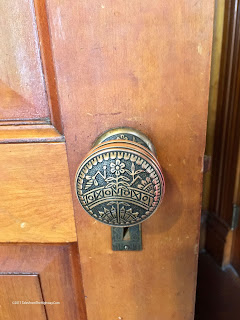 In addition to the normal antiques found in the home, the Cotes - being preservationists - have
amassed a collection of other eclectic antique items.

Church organs, appliances, clothing, woodwork...
The place is loaded with antiques of all sorts!

Below is a time clock that workers would punch in and out on at the mines.
If a miner missed punching out - when he arrived back at work the next day - he found that
he no longer worked there. 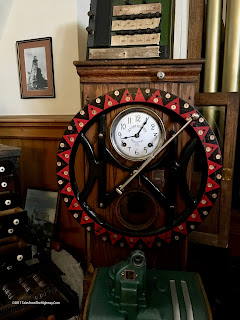 One of Mrs Clarks dresses.
The detail of the French Lace was incredible. 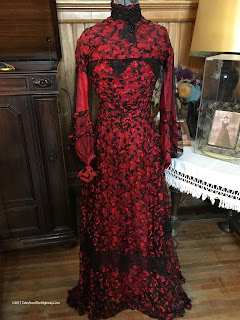 A collection of dolls. 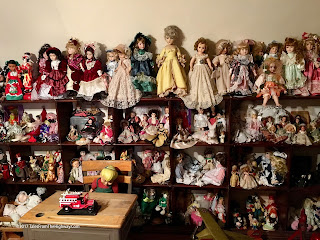 The master bedroom.
The beautiful rare woods, the carvings, the details...
This room is available to spend the night in antique opulence. 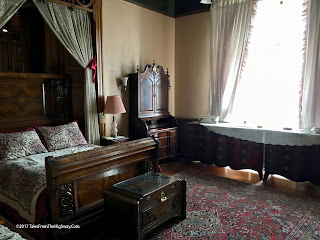 The Dining Room.
Thru-out the house, many of the cabinets are built right into the wall and
are a fixed part of the home. 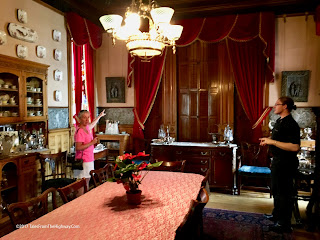 The Main Stairway is called the "Staircase of Nations".

It is so named due to the alternating carved Birds & Flowers that line the staircase...
no two alike, and each representing the flora & fauna of a different nation 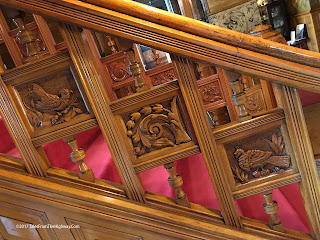 At the height of his career, Clark's business ventures spanned the continent.
From Los Angeles to New Jersey.

In Nevada, he owned property that he developed as a health retreat for his miners and railroad workers to help them recover from chronic illnesses in the desert climate.

He later sold this property to make way for the development of a modest village...

That village is now known as Las Vegas -- still situated in Clark County named after him.

Across the street is another historic home.
One of hundreds thru-out Butte on the National Historic Register. 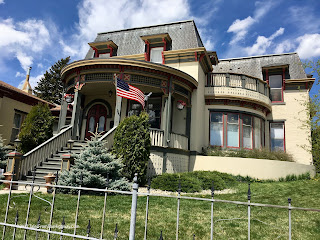 A block away is the beautiful Clark Chateau.
Built by William Clark for his oldest son Charles.

Based on the design of the French Chateaus, it is now owned and operated
by a preservation group and tours are provided.
We did not have the time to visit as we needed to get back home and let the dogs out.

One interesting footnote to history:

Clark's brother, Walter Clark, along with his wife Virginia,  were passengers on the RMS Titanic.
He was among the 1,514 who died on April 15, 1912 after the ship struck an iceberg.

Virginia survived and arrived in New York City a widow.

Some of Mr. Clark's personal items were retrieved during an expedition to the site in 1994
They were identified by engraved initials.

Some of these items were part of the Titanic Display at the Luxor Hotel
in Las Vegas where we recently visited.
We contemplated - but did not visit the exhibit...   maybe next time.

We did visit the Titanic Graves in Halifax Nova Scotia last fall however.

I call this 6 degrees of Travel Separation.
All the connections between the places you visit.

Next door to our RV Park is the Fairmont Hot Springs Resort
We walked over yesterday to check it out.

Today (Friday) the plan is to head over for some soaking time later this afternoon.

There are two indoor and two outdoor pools.
They are continually filled by hot water from below the earth and are kept
cooled to about 105°


Who would have thought that a blog post about a small town like Butte
would have turned out so long?

But..  as is often is the case when you travel, you never know what you
will find around the next bend in the road and surprises are found everywhere.

Tomorrow (Saturday) we head 250 miles up I-15 to Shelby Montana.
Shelby is only 35 miles from the Canadian border which we will cross on Sunday.

Our first stop in Canada will be another 250 mile Sunday drive to Cochrane, Alberta which is
about 20 miles west of Calgary.

Some mixed snow and rain is forecast for tomorrow so it could be an interesting drive over
some of the higher passes along the way to Shelby.