On Thursday we took a 6 hour drive east across New York
on the NY Thruway ($49.00 Toll)
which brought us to Lake George, NY.

Lake George is my old stomping grounds.
Kate and I lived near here for many years, we owned a cabin
on the lake for several years, my job is located in the area,
and as a kid I used to spend endless summers here.

On Friday I donned a suit and went into the office.
Its been quite a while and it was good to have some face to face time
with the boss and my staff.

On the way back to the Motorhome I picked Ron up in Saratoga Springs
and we headed up to Bolton Landing about a third of the way up the lake
to hook up with my friend Matt who has a house above the lake.

Soon we were out on the Lake on Matts Boat.
Our first stop was the Victorian Era Sagamore Hotel.

Built in 1883 the Sagamore catered to the rich and famous of the time. 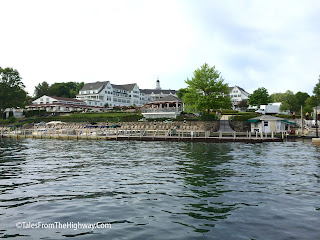 Called "The Queen of American Lakes" it is hard to describe the beauty of the lake.
32 miles long, Crystal Clear, and 280' deep.

Surrounded by tall mountains, much of its shoreline is undeveloped and
protected as "forever wild" land.

Dotted with hundreds of islands...  most are State owned, and many
have campsites on them, accessible only by boat. 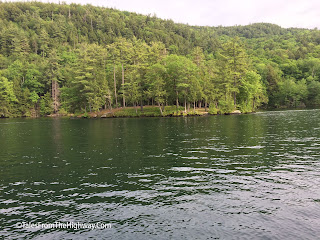 Here we are in Paradise Bay.   A group of close islands with campsites on them. 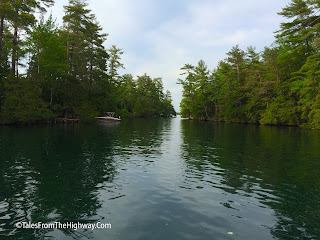 The camping islands range from small single site islands to larger islands
with dozens of campsites. 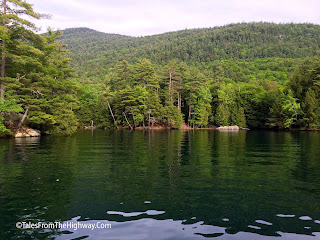 Three Brothers Island.
A group of three privately owned islands spanned by a covered bridge with
boat docks below the bridge. 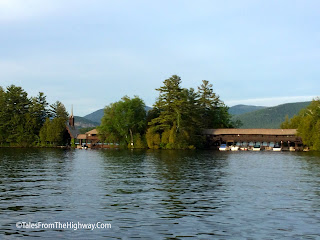 Lake George figured prominently in the Battles between the French in Canada
and the British in America for control of the continent.

The Lake was right in the middle of the route from Lake Champlain in the North
and the Hudson River to the South.

During the French and Indian war the British placed cannons in the narrow sections of
the lake where the water was shallow.   They built up rock cairns and placed the cannons
on these cairns.

The  Cannon Batteries were referred to as "floating batteries" since they appeared to sit
right on the surface of the water.

Below you can see a rock cairn (just left of center).
The island in the background is named Floating Battery Island due to the
large number of floating batteries that surrounded it. 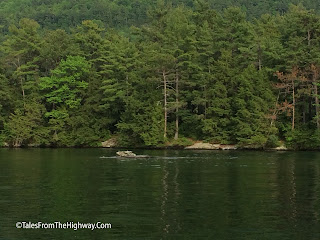 Later - Lake George figured prominently in our battle for independence.

If you have seen the movie "The Last of the Mohicans", this movie was all
about the Lake George Area, and Fort William Henry is located in
what is now Lake George Village.

We are staying at the Lake George RV Park.
The Party Bus is too big for the state parks at the Lake.
The RV Park is nice and wooded.
Full hookups, 50 Amp, and Cable TV at all sites. 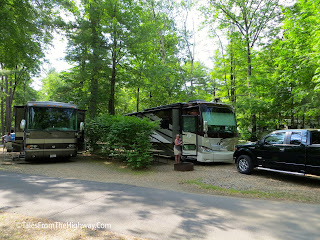 Along the way we stopped at a lookout above Lake George for this shot. 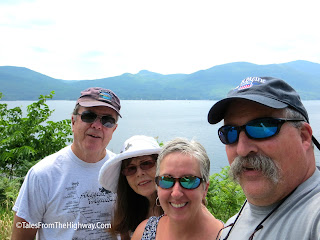 Fort Ticonderoga was built by the French in 1753 to control the overland route from
Lake Champlain to Lake George.   It was situated at the southern end of Lake Champlain.

Just a few of the people who have passed thru this gate"
George Washington, Benjamin Franklin,  Benedict Arnold, Ethan Allen.
The list is much much longer.

The fort changed hands between the French and British, and later the
British and Americans, several times.

This is inside the forts walls.

Looking out at the ramparts.
Note the old glass.

Standing on the upper inner ramparts.

Looking down to the business end of a 16 pounder.
Note the cannons on the lower ramparts as well.

Another view inside the fort looking down from the ramparts onto the parade ground.

The staff all wear period clothing that is made in the original manner on site
(including the footwear)  you can not only see it all being made, but there are also
cannon and other weapon demonstrations.

Below we saw a musket demonstration.

Tomorrow is our last day at the Lake.
Then Ron and Maxine head to Maine and we head south for home.

But first we have a barbecue to attend.
More good food....  Oh the Humanity!
Posted by GregK at 5:17 PM