Quartzsite - The times they are a changin...

When we last checked in, about 3 weeks ago, we were still in Senator Wash, 20 miles north of Yuma.
Since then we have moved 80 miles up the road for the annual flocking of the snowbirds in Quartzsite.
We arrived here about 2 weeks ago and will be leaving Tuesday.
Our group of 4 busses will be scattering about for a while but most of us re joining
a little further down the road.
Kate and I will most likely head back down the road to Senator Wash for a couple of weeks
before we meet up with Rob & Pat at Organ Pipe Cactus National Park on Feb 22nd
Now for Quartzsite....
I won't go into too many details as to why we are here, and what goes on, as we've been coming here
every year since 2013 with the exception of 2021 which had us remaining away due
to Pandemic Inturuptus.
If you haven't head about "Q" you can simply go back to January in any year on the left  (except 2021)
and learn all about what goes on here.
It seems as if the chain has been broken.
Many of the old Montana folks no longer come here and  now a new breed of modern
nomad seems to have taken hold.
I'm not certain if this is a result of the times, a natural spin off from the movie Nomadland, or
most likely a combination of those and perhaps other factors.
One of the requirements to camp on BLM land is that your unit be self-contained with a permanent
holding tank capable of a minimum 10 gallons capacity.
Yet this year the area is filled with people - young and old - living in cars, tents, and mini-vans.
Across from us is a group - one of the people there told us they were affiliated with some
youtube group called MiniVan Lee.
Upon our arrival, one of the group had staked off vast swaths of the desert with yellow caution tape.
It seems as if these new people think that they have the right to arrive and claim the land
sort of like a modern day Columbus.
We ignored the tape and when one of them came over to protest I explained that we've been coming
here for about 10 years and how things work on BLM Land.
I don't think he was happy but he went away.
Meanwhile, where friends Jim & Kristi parked, some nutcase in a van came over yelling
that they were "spoiling his view and would have to move"
When they refused to move he started waving a machette and threatening them.
They called the sheriff which caused him to jump in his van and speed away.
We see them dumping buckets in the washes and can only suspect what they are dumping.
One person even left their tent and a bunch of junk - I guess she felt it was someone elses job
to clean up after her.
I was raised camping with my dad and he instilled values such as "leave the campsite
better than you found it" and "leave some firewood for the next camper"
All of these decent traditions seem to have been replaced by personal rights and "freedoms"
The freedom to be a jerk or a slob.
The "Homeless Camp" across from us during a day of high winds and dust storms.
Many of the tents and garbage blew away 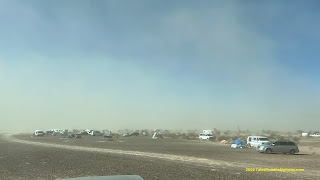 This "genius" tried to drive his van thru a wash and became "high centered" so he spent
several hours trying to dig himself out.   He wound up spending a night stuck there.
Not to mention the destruction of sensitive vegetation that he caused
and is relied upon by wildlife when we are gone. 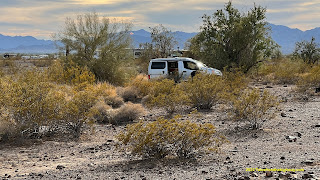 Here you can see the pile of garbage left by one of the "Van People"
3 vans are in the photo and more across to the right.
In the recent past there were none.
Each morning they emerge with tubs of unknown "fluids" that get dumped into the wash. 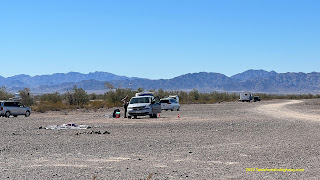 A few washes down is another larger encampment.
It looks more like a Woodstock (Quartzstock) group.
Dreadlocks & beat up vehicles everywhere.
Grateful Dead Music and the smell of pot fill the air. 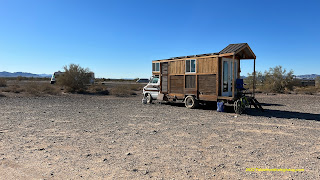 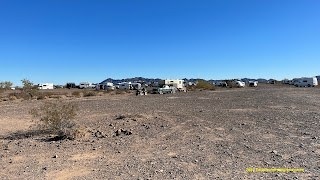 What was once an annual gathering of retired folks has turned into less of that and more of
what appears to be a giant homeless camp, teleworker hangout, and refuge for
those who just don't want to work and don't give a damn about taking care of the land for
people who will follow.
In 10 years I never saw garbage here.  This morning passing the "Grateful Dead Camp", I spotted
glass bottles discarded in the wash next to them.
The times they are a changin....
I'm really going to reconsider coming here in the future.
Budget cutbacks mean no rangers to patrol and enforce the rules anymore and a new
crowd with no respect for the land or others seems to be taking over.
I now call it Quartzstock.
Well that is enough of my Quartzstock rant.
On the positive side - we finally got to see friends that we have not been able to see for
a couple of years.   We also made some new friends and had a great time.
R&P followed us up from Senator Wash and we parked in our usual place outside of the
smaller but still decently sized Montana Circle.
We arrived on Saturday - the start of the big RV show - so more people were already here.
Usually we arrive a week or so prior to the show start.
At first it was just the two of us. 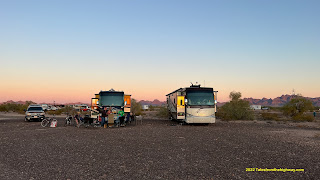 But within a few days there were 4. 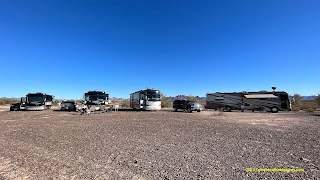 Other friends, Stan & Marilyn, were parked nearby and came over for happy hour.
We were also joined by a few couples that Stan and Marylyn knew. 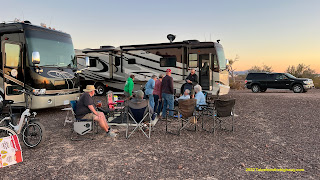 When the winds picked up we moved to the downwind side of my bus. 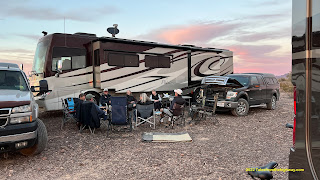 The Big RV show ended a week ago now and most of the retiree types have cleared out.
The circle is gone but the Nomadlanders, (and us) remain.

We are here for tonight and tomorrow nights.
On Tuesday Ron, Maxine, R&P head to Catalina SP in Tucson.
Bobbi & Kevin will as well, then continue onward to the east coast.
We'll head to Senator Wash and perhaps visit with some friends who are warming up
in Yuma at one of the dozens of RV parks down there.

Only 98 days till we board the Queen Mary2 in Brooklyn for 5 months in
England, Wales, Scotland, and Ireland.
There is a lot of traveling coming up so thanks for riding along.
Posted by GregK at 3:54 PM