It is impossible to believe that it's been over a year since I last posted!

I've had several folks drop me a line asking if all is well....  and all is very well.
"The reports of my death are greatly exaggerated"
It's simply that our traveling has been seriously restricted due to the current state of things, and then while we were shut down it was a good opportunity for me to get a knee replaced...
So we've been hanging close to home for a while.
But all is well and we are back on the road so I think there will be more future output
coming your way from TalesFromTheHighway.

This is also my first real blog post using our new email delivery service - MailChimp.   So forgive any formatting errors etc.  I'll have to spend some time getting it back in order once I start posting again on a more regular basis and get to see what the emails actually look like.

In the meanwhile, let me condense the last year into one post:

Like many of you - in order to survive being grounded, I've picked up some new hobbies.
The most recent has been some model ship building.

My first stab was a 1:400 scale model of the Queen Mary 2.    Since we couldn't sail on it - at least I could build one.     I added LED lighting and fiber optics cables for the pools to give it a little pizzaz at night.  I tried to remain true to the actual colors that would be found around the ship. 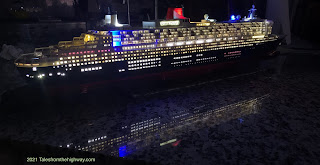 A dime gives some perspective to the size.
Metal railings were from an aftermarket kit.  Lots of detailed painting and bending. 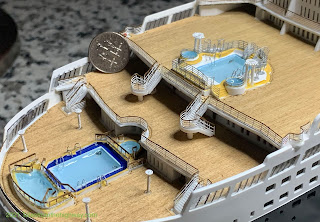 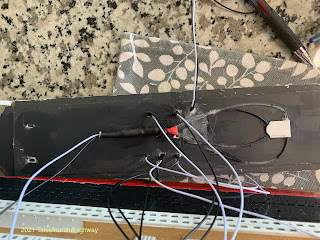 There are also 6 other LEDs in the above photo.   3 on each side.
Those are the ones that back light the Queen Mary 2 name up high on the mid section of the ship
just behind the red smoke stack. 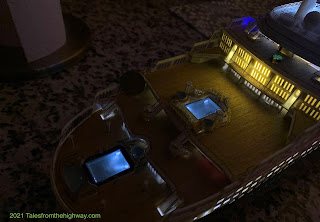 Tiny tables and chairs.
They were flat metal after-market parts.   The needed to be bent to shape and painted.
I had several hundred deck loungers to produce as well. 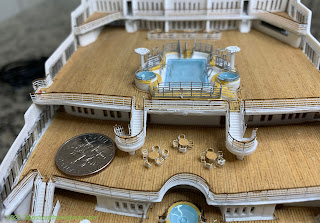 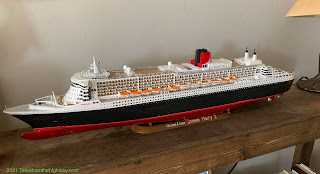 It took me about 3 months to complete the QM2 and was a good learning experience.
I'm pleased with how it came out but there are numerous mistakes that I've learned from.
I gave myself a B- on this job.
My next project is about 10x more complicated.
A 1:100 scale model of the HMS Victory
Experienced model ship builders recommend that beginners like me not start on something this
detailed and complicated.
But I've always preferred the deep end of the pool and so I jumped right in.
This is a representation of what it should look like when complete. 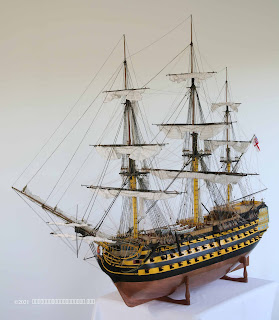 I will have the sailed furled like on the model above.
Over 2,100 parts, in the kit,  below are the 102 cannons painted and assembled. 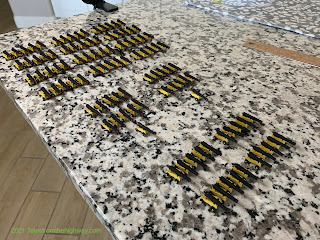 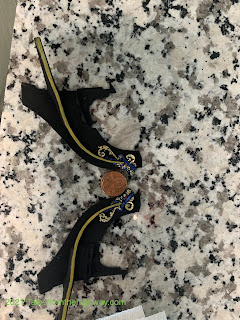 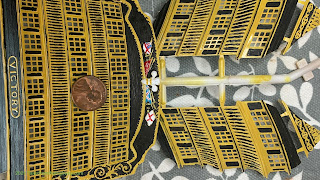 Over 1,800 feet of rope will be needed to complete the standing and running rigging.
I make the rope from thread in several sizes and colors.
To make the rope I purchased this ropewalk.
Attention must be paid to the size of the rope so that it matches the scale when done.
The headstock twists each strand of thread thousands of times.
Below is looking over the headstock down the line of twisted rope towards the tailstock
Once the headstock has twisted each of thee strands, I move down to the tailstock and twist the
strands around each other in an opposite direction.
The opposite twisting energy cancels out each other and keeps the rope from unravelling.
I use the battery operated drill to do the turning of the head and tail stocks.
An example of some 3-strand left hand lay rope that I made.
This would be used for running rigging, cannon block and tackle etc.
I'm going to light it up at night so I experimented with some flickering orange LED lights.
By grouping them just so - the ship now has the appearance of candles and lanterns scattered
about below decks. 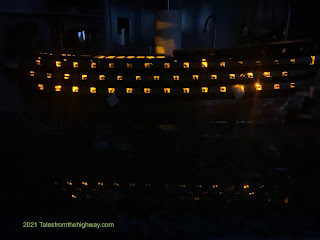 A complete cannon showing the associated rigging.
It's a lot of work with small tweezers and a jewelers magnifying lamp.
Strangely - my long distance vision has gotten better since I started this project.
I think perhaps the exercising of my eyes are making them stronger. 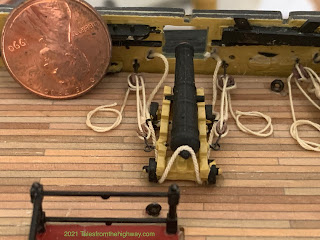 All the steps required to make just the one cannon in place above...
It represents perhaps 8hrs  of work or more for each one.
Many of the below deck cannons are not visible so did not need to be fully rigged like
the ones on the top 2 decks.
The lower shrouds in place and some running rigging.
The hull below waterline is real copper foil.
I'm trying to compete the ship at least 80% true to the real thing. 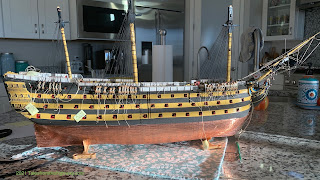 Starting on the lower ratlines.
I calculated that when done with them, I'll have tied over 3,000 tiny
clove hitches!
I space them out and come back to slowly fill in between.
This helps to keep from pulling the shrouds in creating an hourglass shape.
The black shrouds are .75mm and the white rat lines are .37mm
It's a ton of slow detailed work but I find it a great time killer and very relaxing.
I have to teach myself new skills at each step, and often must research how the actual ship
was built and rigged before I move on to a new step.
How was this line run from point A to point B?
I hope when I finish, the final product will reflect at least some of the effort.
On the Road Again!
Well I've taken a break from the shipyard, and Kate and I have finally hit the road after a
year of being stationary.
Many of you will recognize Picacho Peak ahead on the left side of I-10 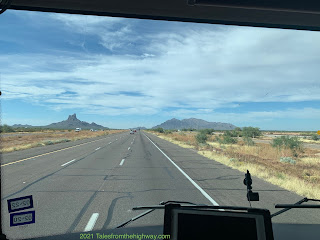 We are currently in Riverside, Ca at Rancho Jurupa County Park.
We came here to attend a belated birthday party for some fellow QM2 kennel mates and
good friends. 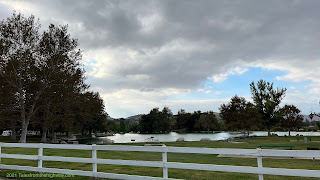 Rancho Jurupa has 2 campgrounds.
Cottonwood, where we moved to on Sunday is newer, nicer, paved and FHU.
The older Lakeview campground is more rustic with dirt roads and sites.
Sunday night we drove to Newport Beach for the birthday party.
Its a pretty town on the coast with lots of canals.
The party was held in the Pescadou Bistro just feet from the water. 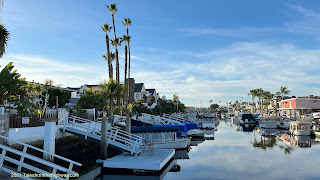 Today our friends, Ken & Catherine (the birthday hosts) came out to Riverside for
a quick visit to our hood.
We had lunch at The Mission Inn, and as usual...  lots of laughs.😂
Lunch in the courtyard.
Such a beautiful setting! 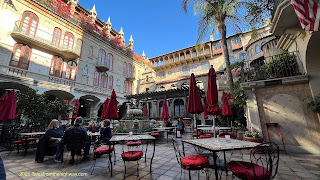 We are here for 2 more days then we head to Death Valley, then Las Vegas, then Santa Fe and so on.
We'll get back to Tucson just after Thanksgiving.
We have to be back by then as we
have 6 "adopted" Saguaros 🌵🌵 coming and we need to be there
to welcome them to their new home.
We also have our normal (pre-covid) winter time desert travel festivities planned
and then in May we are back on the QM2 for  5 1/2 months in the UK and Ireland.
Lots coming up in the months ahead so stay tuned and I hope you enjoy the ride.
Posted by GregK at 8:40 PM