Of Mice and Men

We’ve broken free of the bonds tying us to the Cactus Ranch and have hit the road for a bit.

Our plan is mostly free-range chickens, but we do have a few loose reservations for some spots in Colorado.

Right now a major forest fire has I70 in Glenwood Canyon closed, and that is near where we are planning one of our stops.

We have alternate ways to get there - but if it is smoky….   we did that last summer in Alaska and don’t plan on a repeat.

We’ll see what time brings us.   That’s still a couple of weeks away.

We departed on Saturday Aug with temps pushing 109 °.  Our first stop was Deadhorse Ranch State Park near Sedona.

Fortunately I expected hot weather there and only planned it as a one-night stop over. 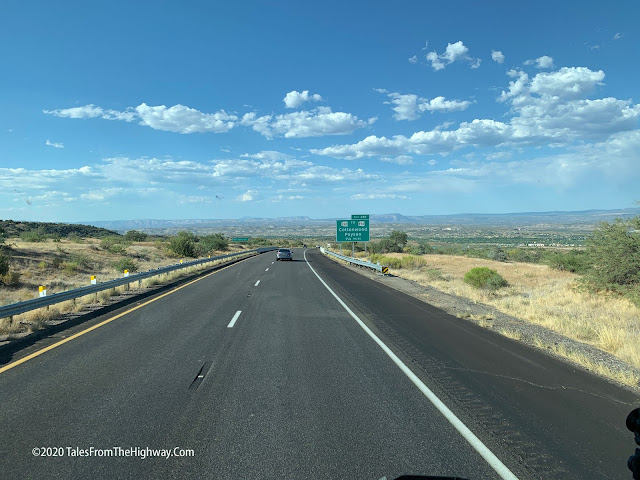 The next morning we got back on I17 North, and climbed up onto the Mongollon Rim where the altitudes are in the 7,000’ range, and the temps 20 or more degrees cooler.

Our first stop - a one-night reservation (all that I could obtain) in the Pine Grove National Forest Campground about 12 miles SE of Flagstaff.

No hookups of course.  Our site - #19 was perhaps the nicest spot in the place.

Great sun for solar, a clear view of the Dish Satellites, a smaller pine tree giving some shade on the south side of the bus, and a great back yard. 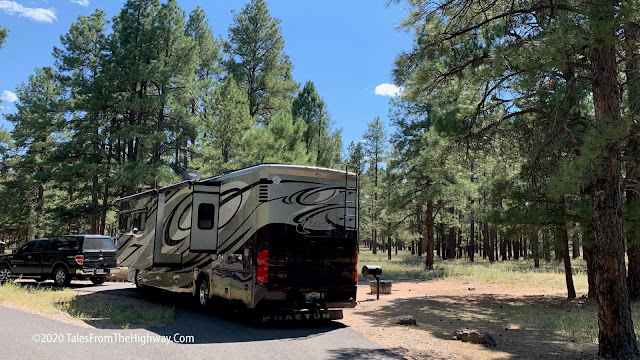 Our backyard at Pinegrove 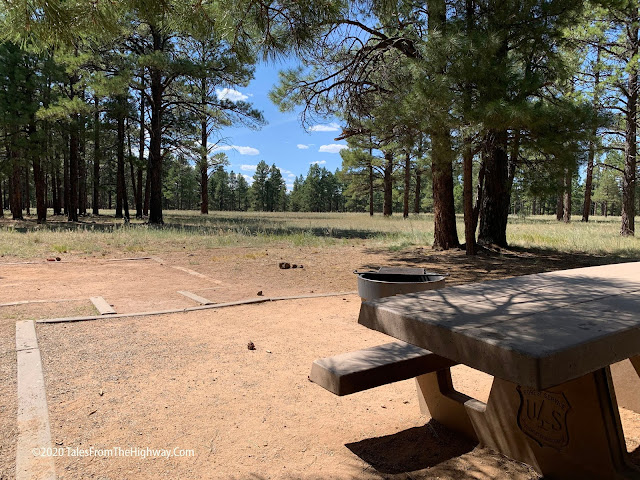 Pinegrove is 1/2 Reservation sites and 1/2 FCFS.

Our plan was if I found a desireable site in the FCFS area, we’d move there on Monday - otherwise there are plenty of places to boondock in the nearby  forest.

Lastly - there is another NF campground just north of Flagstaff (the Bonito NF Campground) that we’ve stayed at beforeand we like.

Plus Bonito is all FCFS so less problems finding an open spot.

Taking a quick spin up to Bonito on Sunday afternoon - we saw plenty of good sites, so first thing Monday we relocated to there, which is were we are now.

Our site is sunny during the day but around 4pm the shade starts to cool off our little piece of the forest and makes for a nice compromise between solar power and comfort.

Bonito CG is right outside the gate to the Sunset Crater Natonal Monument.

A Volcano that recently (in geological terms) blew its top - the ground is covered with black cinder rather than brown sand. 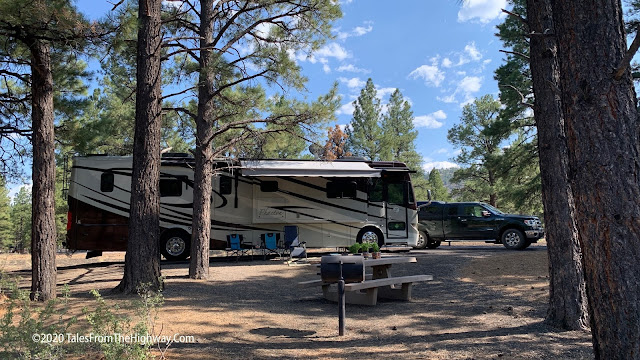 Of course - in many spots that black “soil” is covered by pine straw.

Our back yard here in Bonito. 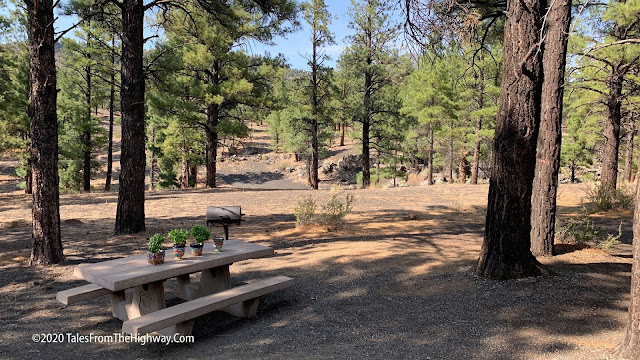 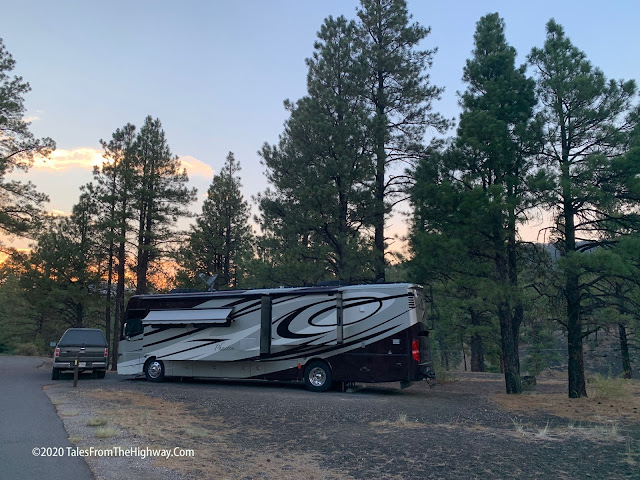 Walking around the campground loop.

Lots of short Pull-over sites.   Some level, and many unleveled back ins 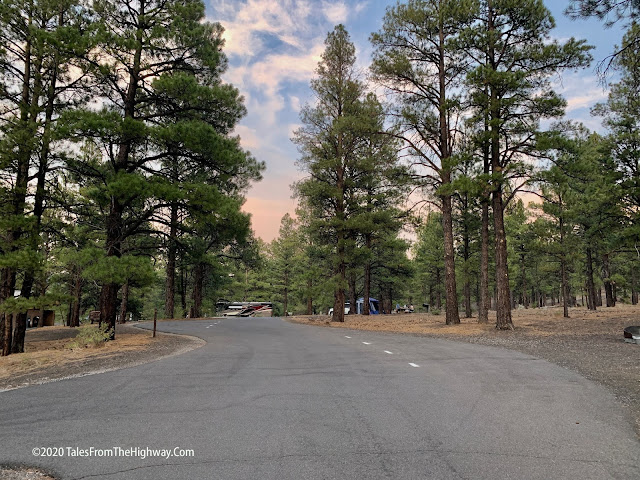 Since the bus is kept at a storage facility - those small jobs often get deferred.   Being back in the saddle is allowing me to check off some items.

First - I discovered a propane leak.   Turned out to be the line from the on-board tank to the regulator.

I found a local welding shop to fabricate a new line for me and I installed it later that day.    No more propane leak! 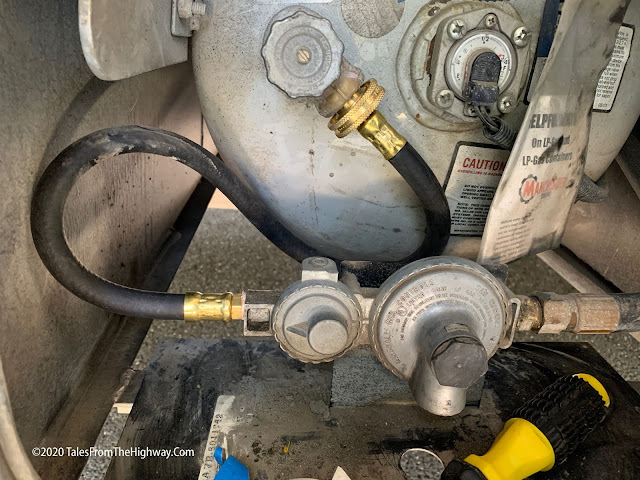 While on a paved site - this was a good chance to clean out the generator spark arrestor.

Better not to do this on grass when boondocking.

To do so - you climb underneath and remove the plug, then run the generator at high load for a short while and it will blow out any collected soot.

What I forgot from the last time that I did it….

Giving me the chimney sweep look. 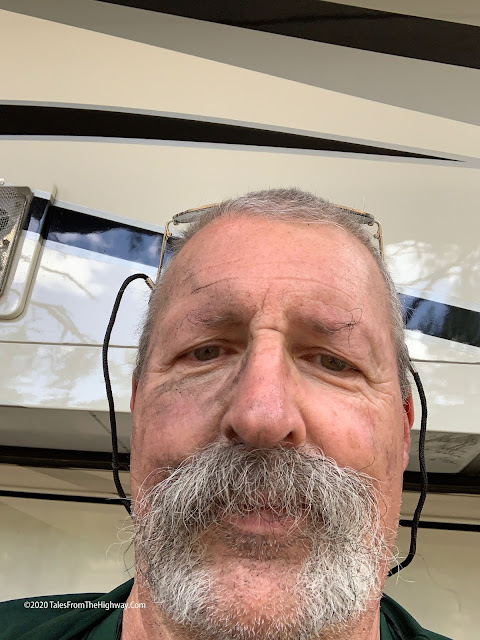 I also diagnosed and repaired a dead CB radio.  (Wire fell off switch underneath the dash)

So once again…. for a few brief moments - the bus has nothing on the maintenance punch list.    Tomorrow is another day.

Finally - the reason for the title of this post.

Is it one of the dogs chewing something?    Nope.

So I get up, turn on the lights, and on the counter - near a big bag of popcorn - I see a darting figure disappear off the counter and behind the couch.   I check the bag and sure enough, there are some small holes that have been chewed into it.

A damn mouse has invaded my space!

So I go below, get my only mouse trap, bait it with peanut butter, put it right next to where he was chewing on the bag,  turn off the lights and go back to bed waiting patiently for that telltale “SNAP"!

So I get up, see him run down behind the couch, then right past Lucy sleeping in her dog bed (great watchdog!) and under the passenger captains chair.

The darn mouse ate all the peanut butter, then went back to work on the bag!

So I again, I bait the trap, put it next to the bag, turn out the lights, and go back to bed and lie waiting for that glorious “SNAP” sound.

And again - the same routine.   Mouse runs past the unaware Lucy - peanut butter is all gone.

I’m laying in bed, heart pounding in anticipation…  any second I should hear that “SNAP"

Nut and peanut butter is gone.   He even took the thread that I tied the nut on with.

Now I’m getting worried that this mouse is going to be so well fed - that he might not want to eat anymore….

OK…   this is going to require an engineering mind.

This damn mouse has a light touch.   So I go to work on the trigger.  I bend it this way and that - until it has a feather light touch.

When I tie the nut to the trigger and then put the PB on it - it takes me about 5 tries to get it to “set” without snapping when I put it down.

Finally - the trap is set and it's lights out, back to bed, and lie in wait….

It only took 4 tries and 4.5 hrs but I got the little bastard!

I suppose just like any condemned prisoner…  he ate well before his execution!

So outside I went into the cool dark night, took him for a walk a couple of hundred feet from the bus, and dumped him into the pines.

RIP little rodent.   You proved a worth adversary.

I’m thinking of Wahweep on Lake Powell next week for a couple of nights to dump tanks etc.

Then perhaps up to Red Canyon near Bryce NP.  Lots of good options up in that area.

Our next hard stop is reservations for a couple of nights Sept 7 at J Robb State Park in Fruita (near Grand Junction) Colorado.

Wherever we do wind up - you should be next to know.