When I left you last, I mentioned that we did not know if we would make some
side trips on the way - or make a bee-line to Seward.

Well the verdict is in....
Greetings from Seward!

Its been a few days with lots of road miles so a bunch of the photos has
the drivers eye view....  bug splatters and all.

We left Muncho Lake on Weds May 29 with no destination planned.
Turned out we drove the 450 miles to Whitehorse where we spent the weekend.
The plan was to be on full hookups so that we could do laundry.

The herd of Bison that is normally near Liard Hot Springs was out
near the road.

We made a quick stop in Watson Lake, Yukon to check out the sign forest.
We put up a sign in 2014 so we wanted to check on it.

Our sign is holding up well.
Perhaps we need to put up another and check off each additional trip as we pass thru. 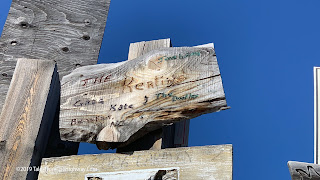 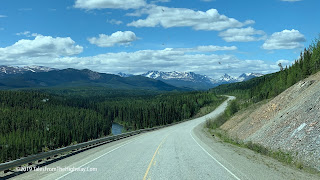 Crossing a bay on Teslin Lake, we cross the Nisutlin Bay Bridge.
At 1,917 feet in length, it is the longest bridge on the Alaska Highway.

We spent 4 nights in Whitehorse.
When Kate tried to do the laundry - the Washing Machine would not turn on.
I had to pull it out of the tight cabinet it is built into, get it onto the bathroom floor,
put on my Maytag Repairman hat, and try to figure out what is wrong.

If I need parts, perhaps I can have them delivered in Seward.
The good thing is I'll have plenty of time since we'll be dry camping for months in
Seward, so there will be no using the machine in the bus anyway.

When I got the machine pulled out and took the covers off I was able to trace out the power
and found a wire had come loose off of the surge suppressor.   When that was plugged in,
I tested the machine and Voila...  problem solved.

A couple of hours after I stared, the machine was tucked back into its cabinet,
and Kate had it humming.
Our $$'s for 4 days of full-hookups would not go to waste.

On Sunday morning June 2nd we headed out of Whitehorse.
Our destination was not set, but we both were leaning towards just continuing on to
Seward.  Oh what would todays drive bring us?

This part of the drive - from Whitehorse past Kluane Lake is one of my favorites.
The mountains and Valleys are spectacular!

After passing Burwash Junction at the north end of Kluane Lake, the Alcan conditions
take a nose dive.   This part of the highway is notoriously subject to frost heaves, and this
trip was no different.   We bumped and bounced our way thru the last 150mile of
the Yukon and around 2pm we crossed into Alaska.

At 3pm we took on fuel at Youngs Chevron in Tok, then turned south
onto the Tok cutoff leaving the Alaska Highway behind.

The Tok Cutoff is notorious for its frost heaves.
The middle third seems to be the worst and a reader of this blog had informed me
that it was bad this year.    She was right.

The first 40 miles or so was a breeze, but rain clouds were forming ahead. 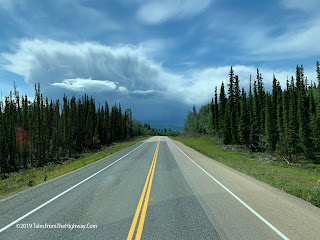 Soon it was raining and the bouncing began. 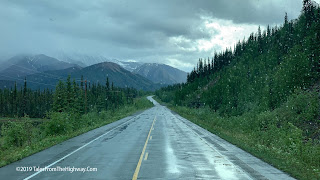 We started to bounce our way down the road and around 5pm we were stopped at some
major road construction.   The flagger told us that it was going to be at least
20minutes till the pilot car returned.

Kate took advantage in this lull to feed the Doodles.
No one wants angry, hungry doodles in a Party Bus.

The doodles are amazing little travelers.   They just take all the changes that we
throw at them in stride as if its normal... and it is.

They finished dinner just about the time the pilot vehicle arrived and they hit the
couches while we hit the road.

The flag person had warned us that at the end of the piloted portion, the road
was really torn up with potholes.
It was pretty bad, but fortunately it was only for a few miles longer.
Then the road returned to its normal bumpy 30mph self.

I silently wondered what an airborne Doodle with a belly full of food would mean.

About 20 miles north of Glenallen, the road smoothed out and we cautiously put some
foot back into the pedal.

Turning south on the Glen Highway, at about 6:30pm, it was getting
near time to start scouting out a place for the night.

We knew that there is an abundance of nice pullouts on
this stretch of road, and about an hour south of Glenallen
at the 128mm we found a beauty!


We pulled into a nice double ended turnout at about 7:30p and shut down.
Situated at Eureka Summit, about 3,300' we figured it might be a cool night, and
it turned out to be not so bad.   It got down to about 39 degrees.

A great view of the mountains, a view of a glacier, and a clear view of the
satellites...  we were home for the night.

This morning dawned cool and foggy.
As we pushed south towards Anchorage and the coast the fog first tuned to intermittent rain.

To the south, the clear blue skies told us the sunshine was waiting! 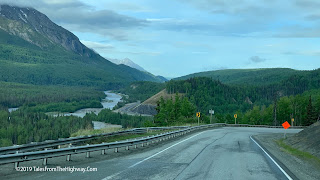 Thru Anchorage, we round the Turnagain Arm, and cross onto the Kenai Peninsula. 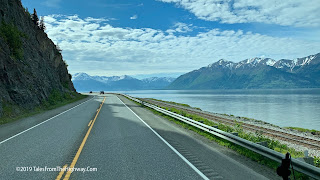 Stopping to top off the fuel tank, by 1230 we were parked in Seward at our old
stomping grounds.
We are parked in the exact same space that we stayed at last July - Sept.
The only thing missing is Eric & Pat who were here with us for a part of the summer.

There is no water, electric or sewer.   There is a town dump station and water
fill a few blocks away so every few weeks we'll need to take care of business but
other than that we've got all the satellites locked in, plenty of solar power,
so life here is good.

We were greeted upon arrival by a Humpback Whale spouting right in front of our
site.   There are also rafts of seals and sea otters swimming by.
Looks like its going to be a fun summer!

We nose up to the town walking path that runs along the waterfront.
In the photo below we are about the 3 RV down right near the South End of the RV Area.

Looking south along the path, there is a town park, then further
down the Marine Science Aquarium, and town. 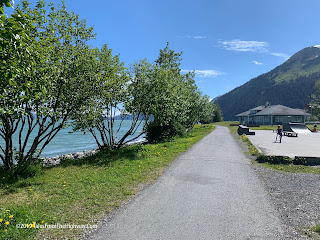 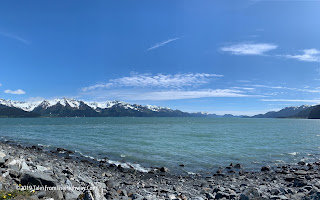 Gracie posed for a photoshoot in the park. 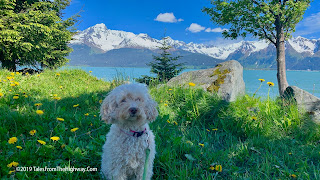 So...  3,944 miles logged on the gps from home and we are here.
My next job is to try and get some good photos of the wildlife for you folks
and get that posted in a future blog.

This 4th of July is the big race up and down the mountain behind us.
It's televised so perhaps you'll get to see it with us.

Tomorrow is June 4th.   The 75th anniversary of D-Day.
Let's all take a moment and think about all those young men, on both sides of
that conflict, that never got a chance to enjoy life like we do.