Leaving Trecase...  we put the wheels back in motion and made the turn north.
Our next destination lay about 4 hours north...  Firenze or Florence.

This was to be a quick 3 night stop.
Our home base for the 3 nights was a beautiful apartment in a 1,000 year old building in
the heart of the Santa Croce district.

The apartment was a tasteful blend of modern conveniences while preserving much
of the ancient.   Our floors for example were original 1000 year old stonework.


One of the centerpieces of the city is the Cathedral Complex.
The Cathedral itself is massive.   The third largest in the world after
St Peters at the Vatican and St Paul's in London.

Constructed between 1296 and 1436  (with more construction later) it
took about 140 years just to build the main structure.
It was completed and in service before Columbus even left for the new world.

Faced with Polychromatic Green, Pink and White marble it is as beautiful as it is impressive.

It is so large, that I found it near impossible to get the whole front of it in one frame.

Below you see the front of the Basilica and Giotto's Campanile,
(the belltower) to the right.

Many of the Italian Churches of the period had separate free standing bell towers.
The leaning Tower of Pisa being a prime example of one.

The photo below from the web shows the Cathedral with the dome at right, and the
free standing bell tower at left. 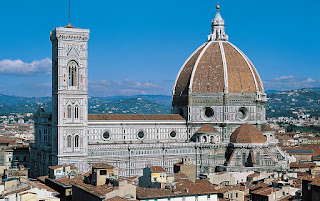 I attempt to show the scale from ground level with a panorama photo. 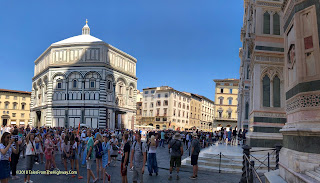 Looking at the Cathedral from the rear - behind the dome. 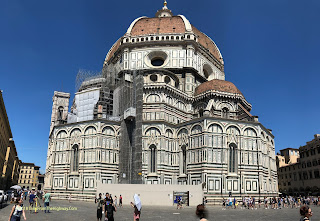 A visit to Florence is all about the art.
You couldn't trip on any street corner without bumping into something beautiful.

Heading further into the city we enter the Palazzo Vecchio.   At one end of the Plaza
is the Loggia dei Lanzi, an open air art gallery filled with original and reproductions
of famous works of art.

Below, one example of the many, The Rape of Polyxena.

It tells the story of how Polyxena betrayed Achilles by telling of his one weakness - (his heel).

Later in the temple of Apollo  Polyxena's brothers, ambushed Achilles and shot him in the heel with a poison arrow that was guided by the hand of Apollo himself.

Achilles' ghost had come back to the Greeks to demand the human sacrifice of Polyxena
so as to appease the wind needed for them to set sail back to Hellas.
She was to be killed at the foot of Achilles' grave.

It shows her mother kneeling, about to be struck down, as she begs the soldier taking her
daughter away to her fate.

The entire sculpture was carved out of a single block of stone. 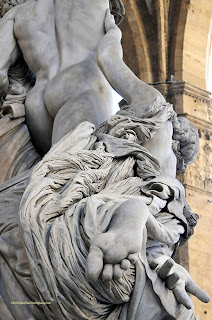 Also in this location is a replica of Michelangelo's masterpiece "David"


The lines to see the original were several blocks long and would have taken
3 -4 hours to get in to see it.
I like art but....
Next time I will plan ahead and come to Florence when things are a bit quieter.

Moving onward we headed to the Ponte Vecchio Bridge.
A bridge has been here since Roman Times and swept away by floods several times.

This current bridge- the "new" bridge - has been here since 1345

Like many of the time - it has shops built right on the bridge.

Crossing the bridge, we began our climb up to the high ground overlooking the city.
On the way you get a view of the ancient wall that used to protect the city. 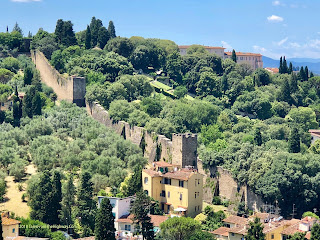 Reaching the top we arrive at Piazzale Michelangelo.
Where... there is a bronze replica of David.

The view from up here is the best in the city.

Another close-up view of the Cathedral as we descended from Piazzale Michelangelo. 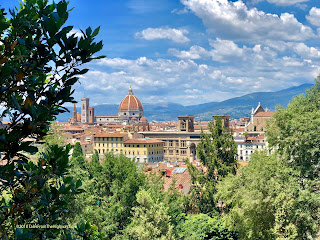 Heading back down the hill it was late afternoon so we headed back to our apartment.
On the way we took a detour to cool off with a gelato from our favorite place
(yes we had found a favorite gelato place) right around the corner..

On Saturday we headed out early to see if we could get into the Cathedral - no luck -
the lines were already blocks long and it was just opening time.

Kate was disappointed so I had to come up with a solution quick...

Since there is no shortage of fine Basilicas in Florence we headed to
Santa Maria Novella about 1/3 mile away right next to the train station.

Built upon the original church from the 9th century, it is the first great basilica in Florence.
Construction began about 1246 and was completed in 1360.

The vast interior is based on a basilica plan, and designed as a Latin cross like so many. 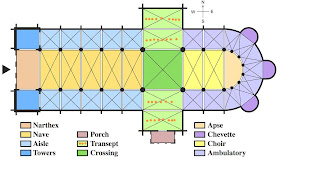 You can refer to above when I mention some of the features.

The large nave is 100 meters long and provides a feeling of austerity.

The interesting column placement provides an effect towards the apse
where the nave seems longer than it actually is.  (and it is quite long)

This is accomplished by placing the slender compound columns between the nave
and the aisles progressively closer the further the observer moves into the nave,
creating the illusion of greater length.

Below: The view across the Nave from the right, to the left transept.
Like all the churches here... the artwork is inspiring. 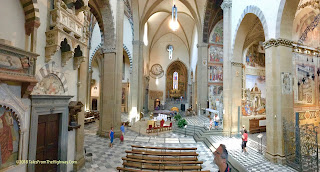 An interesting side note to this Cathedral was the part that it played in the
establishment of the Gregorian Calendar... the one that we use today.

If you look at the photo below you will see a few blue arrows pointing to a dark line
that runs the length of the Nave.
It is a meridian line.
The Basilica is oriented exactly North South and the brasz meridian line inlaid into the floor
has numerous markings including the solstices, the zodiacs etc.

Precisely placed holes in the church allow the sun to shine on an exact spot on the meridian
at precise moments.

By observing the amount of days it took from the sun to return to the exact same spot
a year later - it was possible to determine the exact number of days in the year. 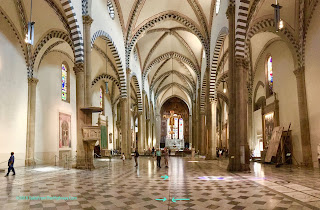 Last on our list was right down the street from our flat...
The Basilica di Santa Croce.

It is the Florences' primary Franciscan Catholic Order church.

The largest Franciscan Church in the world, it is also the burial place of several
noted Italians including such as Michelangelo, Galileo,  and Machiavelli.

It is also here where Kate... following the instructions of the Vatican priests,
she attended mass at the Basilica on Saturday evening and
performed her final obligation which gained me a "get out of jail free card".

Now I'm not quite how all of this works but....
As I understand it - she gave up her seat on the bus for me.

So now she has to work off my demerits to get back into good graces
and regain HER seat on the bus.

I think she's gonna be a busy girl!

She does has some help from her Posse in Rome however!

Some notes on Florence:

Its very busy this time of year and Florence is a compact city.

If you want to see the sights you need to plan ahead and get tickets with
stated reservation times.   They sell out well in advance.

If you dont have them... like we didn't - then you have to wait on line.

In the Summer the lines are long long long.
To long for this boy.

There is still plenty to do and see, but if you have your heart set on the
most well known of the attractions... then you better plan ahead.

Next...  we head to the country.
A small village about 30 miles or so west of Venice.
Should be nice and quiet.

While at our next stop we saw a vet who prescribed a combo antibiotic/steroid
topical cream for Gracie and ended the oral antibiotic that she was taking.
Overnight we have seen very good results and the swelling has reduced dramatically!

Maybe (hopefully) we are getting to the end of this chapter!