We left Lourmarin, France on Sunday June 10th and traded in our
Bonjours for Buongiorno and our Merci's for Grazie....
We are now in Italia!

Our route, mapped below, took us about 570km (350 miles) along the French Riviera,
into Italy, thru Genoa, and then curved south thru the Italian Coastal Mountains
to our destination for the next 4 days - Pisa, Italy. 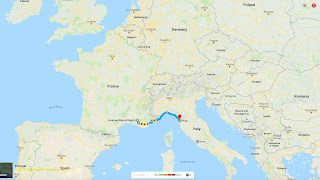 Meeting us here for the duration were our good friends Eric & Pat.
You might remember they visited us last summer in Alaska.
Traveling from the US, they arrived at our Air BnB only about 15 minutes after we did.

We took a nice walk along the Arne River which was practically outside our door.

The dwindling light as we returned home cast long shadows along the river...
Slowly the day was giving way to night. 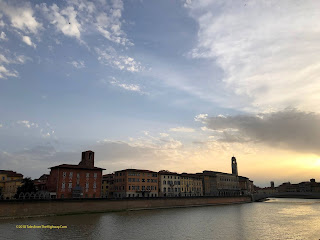 We enjoyed a simple snack of some bread, marinated olives, Parma Ham, and cheeses,
that we had purchased at the Friday Market in Lourmarin.

I of course enjoyed a nice cool Guinness Draght. 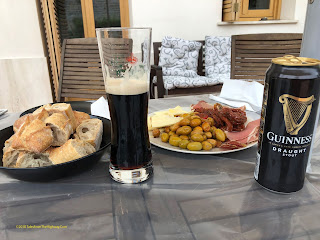 A day view of the Arne near our house. 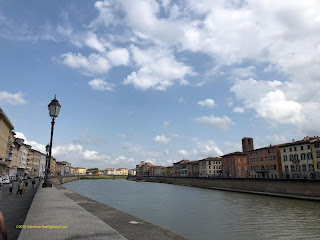 Of course the main reason for us coming here was to visit the Cathedral Square and
the Leaning Tower.   It was about a mile or so walk from our place thru the old city
to get there and along the way we stopped at the local produce market and the
ladies did plenty of window shopping.

I kept offering bets that the tower was not going to stay standing thru the day...
but I was wrong.
Last I heard - its still upright.   (sort of)

We have a very nice place that we are renting in Pisa.
Its a townhouse that backs up right to the ancient wall of the city.

Its in the middle of the city but inside our little compound it's a world onto itself.
Quiet - almost farm-like.

We even had a fish pond.
Eric & Pat in the photo below were checking out the fish.

Every time the Doodles would walk by the pond the fish would get startled and splash....
Which in turn scared the Doodles and they ran....

It was too funny!  Such mighty hunters they are!

We took another walk back to the tower since it was a sunny day but this time
we walked along the top of the ancient wall.
Stairs to the top were right outside of our house...   so convenient!

From the top of the wall our gate is the second one from the left. 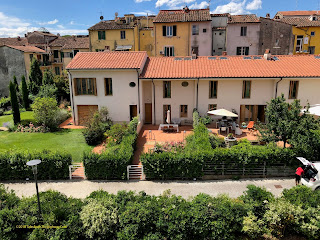 Kate on top of the wall. 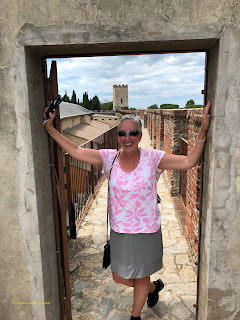 It was about a mile and a half walk along the wall to Cathedral Square.
Below you see the tower in the distance. 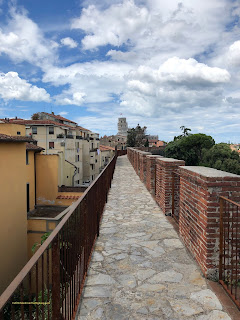 Walking the wall gave us a whole different perspective on the city.
Below you see one of the finer homes, and across the street (to the right) you can see
the brick archways of a Roman Aqueduct that brought water to the city in ancient times. 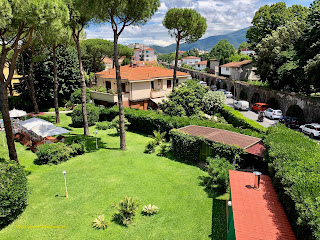 Getting closer the tower & Cathedral peek thru the trees 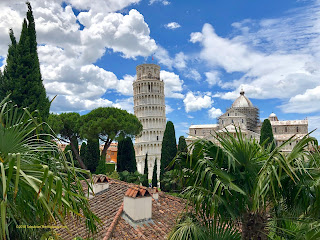 A nice vantage point from atop the walls.
Most people never climb the wall - we had it almost to ourselves. 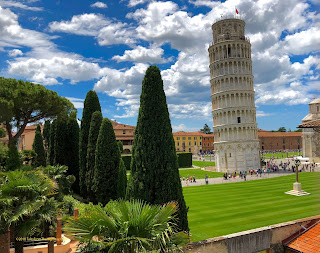 A view of  Piazza del Duomo  (Cathedral Square).
It was renamed Piazza dei Miracol  (Square of Miracles) in the early 1900's

The tower - built as the  free standing bell tower for the Duomo (Cathedral) started to lean
during its construction.
It was built in 3 stages over 199 years!
Construction started in 1173

In the foreground is the Baptistery
Behind that the Duomo
and then finally the Tower. 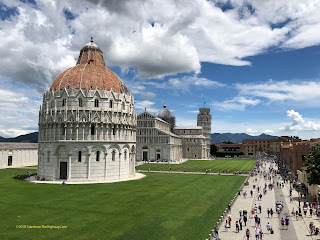 On the way back from the plaza we stopped for lunch at a nice outside bistro.

While in Pisa Gracie gave us quite a scare!

Walking back from one of our outings I stopped to give her some scratches on the neck and
noticed two large lumps on either side of her throat that had not been there the day before.

Back at the house I googled the symptoms...and realized I could have a serious problem
here and I needed to find a vet.

Trying to find a vet at 7pm in a city where I dont speak the language was a challenge.
I made several phone calls, left messages and sent out emails.
I contacted our host - who had a dog - and he gave me a recommendation for his vet.

The Vet was a 24 hr animal hospital in a town about 25 minutes away.
So I called and communicating with the receptionist we managed to understand each other
enough that I would email them what was going on.

they would then translate and get back to me.
I used google translate on my computer and sent my email in both english and Italian.

True to form...  about 20 minutes later (now about 8pm) they sent me back an email and
told me to come in the next day at 1pm. 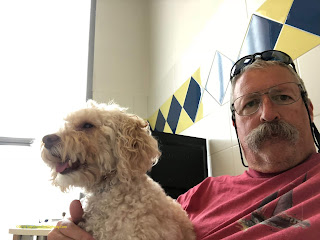 Long story short...
Her lymph nodes were swollen and it could be anything from an infection to Lymphoma!
A scary possibility!

She seemed fine.  Eating normal, no pain, just these two large lumps.
If you read up on Canine Lymphoma... this is what it would look like!
But then again... so would other things.

At the vet they did blood tests, took fine needle samples from the nodes, and did
ultrasound imaging.

The blood tests came back fine - the rest of the tests would take longer and we had
an appointment for 530pm the next day.

Poor Gracie had been poked and prodded, got a shot of an anti inflammatory,
and we went home with Antibiotics and anti vomiting medication.

After the vet visit we decided to take our minds off of this and to take advantage
of the location in Luca - a Tuscan Walled city.

So we all went into the walled city to see the sights.

Lucca is noted for its tree lined walls that surround the city.
It is a beautiful city.   Small, prettier, and more upscale than Pisa.
Had I know about this place I think I would have looked for a place here and just drove
into Pisa when I wanted to see the sights there.

A view thru the arch. 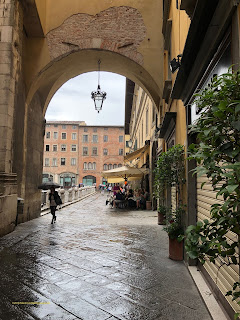 Kate and Lucy in another Square 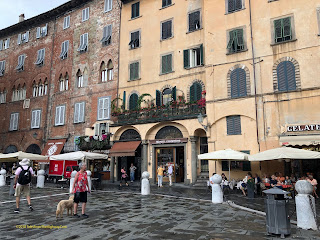 The preferred mode of transit in the city as cars are severely limited within the walls.

We used the other preferred mode of transit...

On the way back to Pisa we hit rush hour and had fun navigating our way back to the house.
Pisa, Lucca, and many cities in Italy have instituted limited traffic zones  (ZTL's)
where unless you have a permit.... you are not allowed to enter within the boundary.

Its up to you to know about it and heed the signs.
Enter a ZTL and the fines are over $100 for each infraction!

There is the story of an unknowing tourist in Florence who wracked up over $2,100 in
fines in just a 4 day stay! 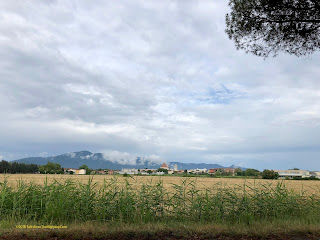 The next day i was back at the Vet in Lucca.
We are now in Rome and I've been to the Vet here once for a follow up.

The good news is that Gracie is on the mend.
She caught an infection somehow...   perhaps dirty city streets?

These dogs have been averaging 5 miles or so just about every day with us.
Who knows where she stuck her inquisitive little nose.

We now wash the dogs feet when they come in from the city streets and limit their
walks around while in the cities.

She is still on antibiotics... her Lymph Nodes have reduced in size to about 1/3 of what they
were so all signs point to a slow but steady elimination of the infection.

The vet here in Rome saw Gracie once, said to keep up with the antibiotics,
wrote a prescription to extend them....
has me coming back Friday before we leave for Pompeii for a final check up...

And so far has not asked for a dime!

We've been in Rome for about a week now and will be here another 3 days or so.

Send some good wishes our way to help keep Gracie Doodle on the road to full recovery.