Versailles France - Fit for a King (and Queen)

On Memorial Day Monday we left our lovely little farm "Peacock Mews" near the
English Channel Tunnel (The Chunnel) and headed to France.

Having turned in our right hand side drive car we took a Folkestone Taxi.

The taxi is one way to get the dogs across the channel.
Dogs can ride in your own car on the Chunnel Train, or on the Ferries.
Since we were not taking right hand drive car to France, those options were out and
we would have had to put them in a kennel on a ferry - not something that we wanted to
do to them after 7 days at sea last week.

So enter the Folkestone Taxi.
Operating out of Folkestone UK, the taxi takes pets and we then can take the train
as they ride in comfort in the taxi for the short 30 minute trip thru the tunnel.
(a ferry takes several hours)

Our driver picked us up at 0730 for our 0850 train and in about 10 minutes we were driving into
the Chunnel Complex and getting Qued up for our train. 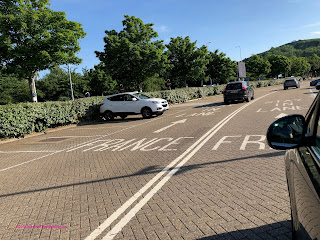 Crossing the many tracks on a bridge, ramps lead down to the train platforms.

At the bottom of the ramps you drive along the platform and are directed into a door of the train.

Inside the train we are ready for the quick trip to France.

Arriving in Calais - our driver drove us the 10 minutes to where we picked up our
Renault EuroDrive Leased Vehicle.

The EuroDrive Program by Renault or Peugeot is a special program for non-EU Citizens where
we can lease a car....  just like you would in the states.
The difference is that my lease is for 3 months - not 3 years.

The car is in my name with a French Registration and insurance included.

Prior to signing on - I specified exactly what vehicle I wanted so unlike with a rental car where
you wind up with whatever they have on the lot - I knew exactly what I was getting.

For me - its cheaper than renting and I get a brand new car.  This one had 6 miles on it.
Its a win-win program.

I specified this car being (hopefully) large enough to hold the luggage that I had projected
to be carrying a year ago when I planned the lease and fortunately we were able to squeeze everything in and we are finally motoring around like Royalty.

Our car - a 2018 Renault Talisman Initial Paris - their flagship vehicle, is all options
and loaded with goodies such as 4 wheel steering, all leather interior, heated and
cooled seats just to name a few of the perks.

Our 3+ hr drive to Versailles, just outside of Paris, was spent trying to figure out how to
use some of the goodies such as the adaptive cruise control.
About 90 min into the drive I finally figured that one out.
A switch on the console between the seats was the key.

The manual is in French with no English Section so once we arrived
at our home for the next 5 days I downloaded an English Manual.

The car also has an auto parking feature but I had not figured out
how to use that in time for our arrival.
Europe is noted for many very tight parking spots and somehow I managed
to squeeze the car into this spot on my first try.

Perhaps the 4-wheel steering was a big help?
I just hope that I can get it out.

Our Air BnB in Versailles is a lovely flat on a tree lined street
just steps from the Palace of Versailles.

We access our flat on the 5th floor by a small Parisian Elevator.

Our building was built in 1864, and has been owned by the same family since then.
Only family members may own a share of the buidling
Currently there are about 400 of them who live here.
Holidays see family celebrations with over 150 in attendance!

The basement has a maze of rooms and tunnels that lead to several places including the
Palace of Versailles and during the war - the building was used
to hide Jewish Families from the Nazis.

Upon arrival we were warmly greeted by our host, Thibaut, who spent almost an hour
informing us of the history of the building and the city,  plus gave us a ton of tips about
restaurants and shortcuts that helps us to see Versailles more like a local than a tourist.

Outside our door are sidewalk cafes, and around the corner
is the 2nd largest food market in France.

We went to the market to provision for some meals at home. 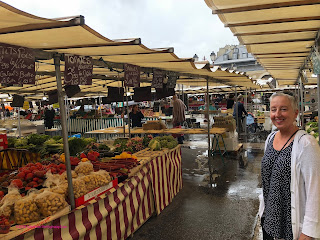 Just a sample of the provisions that we obtained on our first outing.
Salads, Small Pizzas, some Chicken Cordon Bleu, a roasted chicken, fruits, veggies,
a couple of quiches, and a delicious fresh Fruit Tart.

The view from our window.
Thunderstorms have rolled in each evening.
Then fireworks lit up the sky over the Palace.

It seems that the doodles are all of a sudden no longer bothered by storms or fireworks!
They are such good travelers and immediately adapt to whatever new circumstance
that they find themselves in.  Probably better than most people.

No trip to Versailles would be complete without a visit to the Palace of Versailles.

It served as the principal residence of the French King from Louis XIV in 1682 until
Louis XVI and Marie Antoinette fled at the start of the French Revolution in 1792.

Much of the Park surrounding the Palace is free and dog friendly, but to see the inside
you need a pass.   We purchased a 2-day pass for €30 each.

The below photo of the Hall of Mirrors was taken from the internet since
trying to get a good photo with all the people is pretty hard and I wanted to give you a good
idea of what it actually looks like.

While originally an outdoor terrace - the hall was built over 6 years and completed in
1684.  The sheer number of mirrors (over 300), which were extremely rare and expensive
at the time, paid testament to the power and wealth of France.

The paintings are arranged chronologically up the left side of the picture, and then
back down on the right.

The wonders of the palace is not confined to the interior.
Surrounding the palace are the most amazing gardens, and man-made lakes.

The Grand Canal, in the distance below - is shaped like a cross and is over a mile long.
It was used for boating by the King & guests, and on its shore, a Venetian Village housed Gondolas,
and Gondoliers given as a gift from the kingdom of Venice.

The fountains were engineering marvels at the time as they required water to be pumped
up from the Seine River to a height of 100m above the fountains to provide the water pressure,
then piped to the fountains from the reservoir miles away. 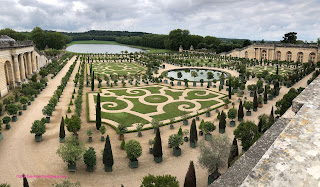 The park around the palace... just a short walk from our flat - is our playground.
Each day a long walk with the dogs thru the beautiful green countryside.. 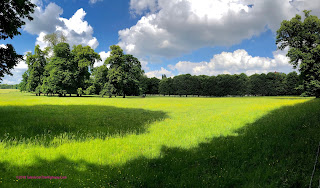 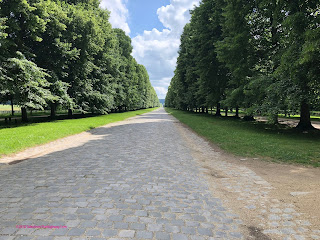 From the park we get another perspective of the palace.

In the northwest corner of the massive Palace landmass lies another Versailles.

First there is the Grand Trianon

Built by Louis XIV as a retreat from court for he and his mistress, it was also used by
invited guests to escape the rigid formalities of life in court. 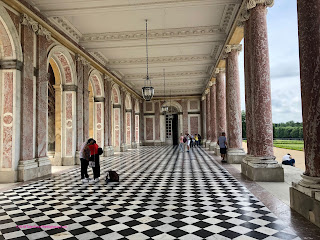 The council room below is where the King would meet with his ministers.

View of the Gardens which fill the complex 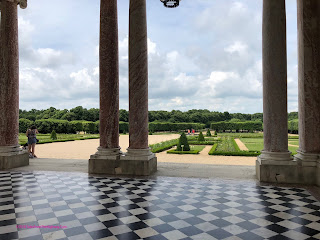 The massive gardens surrounding the Grand Trianon and beyond fill the air with
the wonderful scents of fresh flowers. 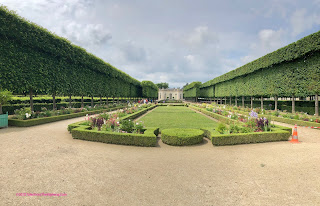 The Petit (or little) Trianon was built by Louis XV on the grounds of the Grand Trianon,
although you can not see one from the other due to the distance and gardens that surround both.

The Petit Trianon was built simply as a place for Louis XV's mistress who died prior to it's
completion, so Louis housed his next mistress there instead.

Upon Louis XV's death in 1774 Louis XVI gave it to his new bride Marie Antoinette who
used it as her get away from court.

It is said that only the Queen could allow someone on the grounds and that not even the
King could come without her approval.

This supposedly infuriated the members of court, that this "foreigner" could wield such power.

The scent of rose and jasmine filled the air as we strolled about. 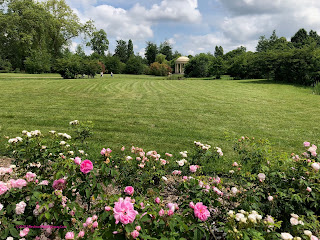 On the first floor of the Petit Trianon lies the servant facilties.
Below is the reheating room.
Since the food was prepared a distance away - it was brought here for the fininshing
touches, and then reheated prior to being laid out for meals.

Below is the drawing room.
A 16th century version of a family room.
Marie Antoinette would entertain guest here and listen to music.

The wood carving detail on the walls thru out all of the properties is amazing.
The skill of the craftsman is evident.

In this room, the music trophies are decorated with the Louis XV monogram,
consisting of 2 L shapes depicting Myrtle leaves,
entwining three natural fleur-de-lys set beneath a crown of roses. 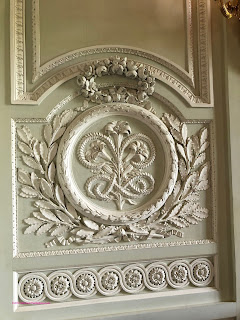 The view of the gardens from the windows of the Petit Trianon. 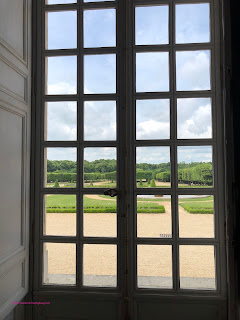 This was Louis XV and later Marie Antoinetes bedroom 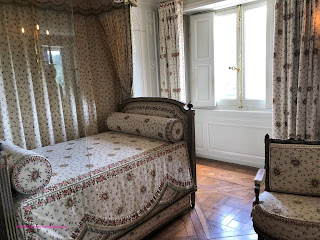 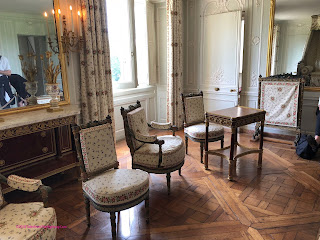 Between the Petit & Grand Trianion an arbor covered in jasmine fills the air with
the most beautiful scent. 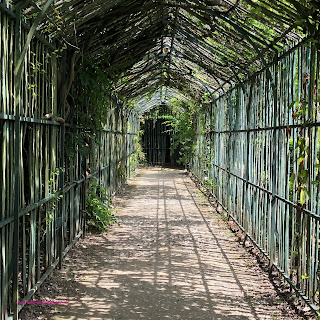 Last, but certainly not least on our speed tour of the Versailles Palace Complex was
a visit to  Hameau de la Reine - The Hamlet of the Queen.

Marie, a native of Austria, was very unhappy with life at court.

Homesick, Louis XVI gave her a plot of land upon which she set about re-creating a village
in the theme of her homeland.

It had a farm, dairy, and all the needs of a self sustaining village.

It is said that she would spend time here dressed in peasant clothes and tending the gardens.
This unintentional mockery of the French peasantry led further to her distain.

Below - the mill was never used to mill grain. 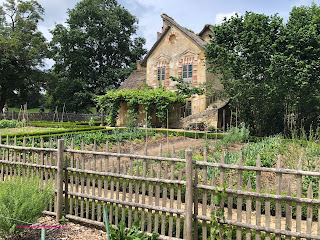 The Marlborough Tower was decorative. 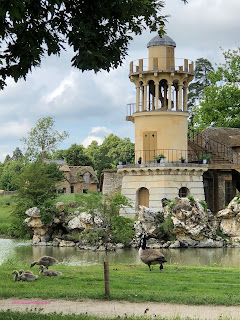 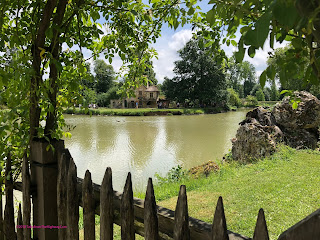 Le Colombier below was basically a house for birds.
Doves, and rare poultry from the west of France were brought for breeding and
care, to be enjoyed by the queen at her leisure.

The Mill with the Queens house in background on the left. 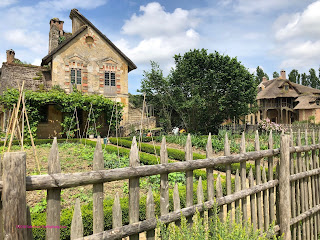 We have one more day left in Versailles.
We had thought about taking the dogs on the metro train and heading into Paris,
but I think we shall just spend one more day here enjoying
the expansive parkland of the Palace.

I think their little paws might enjoy a lighter workload for a day.

On Saturday we have a 5 hr drive to Annecy France which is called the "Venice of France".
When we post next from Annecy - you will see why that is so.