While visiting Alaska we took a side trip to Switzerland.
Or is it the other way around?

We left Tok and headed southbound on the Tok Cutoff.
Our destination was Valdez,  250 miles to the south on Prince William Sound.

We had taken this drive (as far as Glenallen) a few years back and it was a rainy day
and I recall telling our traveling partners how we were missing some beautiful views
because of the low clouds.

On this trip however we had perfect weather and reaped the rewards.

As always - the pictures just cannot do it justice.

The 360° views of snowcapped mountain and endless forest were stunning.
About 120 miles south of Tok you come to Glenallen where the road forks.
To the right is Anchorage...   We went that way last time.

To the left is Valdez where we were headed today.

To get to Valdez you must climb over Thompson Pass.
Its not a particularly high pass (2,800') but due to its location it can be challenging at times.

Our weather was perfect and we only had to contend with some road construction at the top.

Soon we were at the top and started down the other side to Valdez and sea level.
It was unbelievably beautiful on top of the pass and down the south side to Valdez.
Its an easy ride down the pass.
At about 40mph I was able to coast down the grade with the engine brake alone. 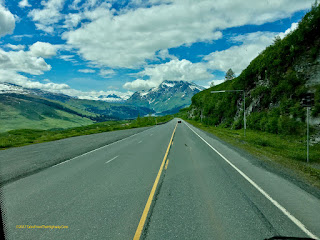 At the bottom you enter a canyon that leads to the sea.
Alaska is waterfall country...
All that snowpack and the glaciers send their winter load downhill and streams and waterfalls
dot the mountainsides everywhere you look. 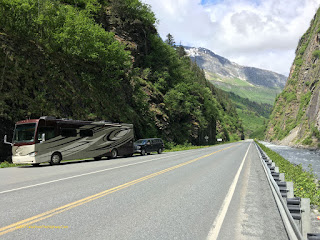 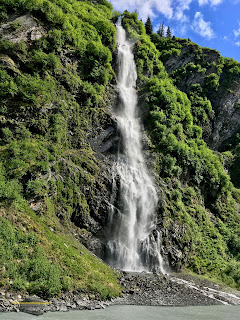 Approaching Valdez we spotted a pair of Moose Cows and we finally got a couple
of good pictures of these elusive creatures. 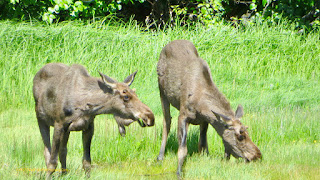 There are several RV parks to choose from plus some boondocking locations.
We chose the Bear Paw 2 Adult Only park due to its waterfront location.
The reviews were stellar and upon arrival it was immediately evident why.

A million dollar view from our front window. 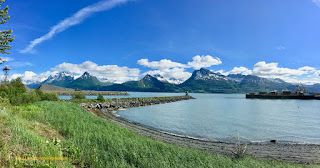 This is a beautiful place!

The backdrop of the boat harbor is stunning!
It really does look like Switzerland...
Or does Switzerland look like Valdez? 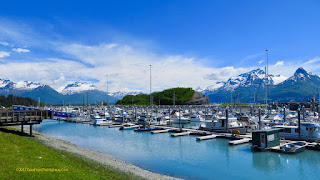 We keep spotting the Yukon Lovebirds everywhere we go. 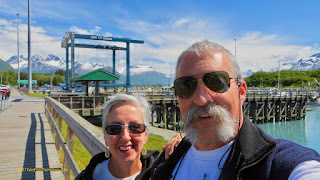 Directly across the bay from us is the Valdez Marine Terminal.
It is the termination point of the Alaska Pipeline and where the tankers
are loaded with crude oil from the North Slope.

It is also where the Exxon Valdez departed from on its ill-fated voyage in 1989
spilling almost 11 million gallons of crude into Prince William Sound.

When we arrived I saw a tanker being loaded.
The next morning it departed and immediately a new one took its place.

Less than 24hrs later the tanker in these photos (M/V Polar Enterprise)
departed and tanker #3 took its place.

I made a 24hr Time-lapse of the view out of our front window.
You can view it below...

Or at this link

Be sure to do full screen for the full effect.

About the time you see the tug boat in front of us move
into position -if you look closely across the bay -  - you will see one tanker depart
and another (the one in the photos above) arrive.


You will note that it does not really get dark.  It seems darker than it is because that is how
it looks using the GoPro Camera but you can see the clouds are still bright.
Also notice how short the "night" is in comparison to the day.

This morning the Polar Enterprise departed with its load of about 1 million Barrels,
(42 million gallons) of crude oil headed for a west coast refinery.


As it departed, minutes later the tanker Liberty Bay Arrived.

Today we took a ride around to the other side of the bay.
While we were not allowed inside of the Oil Terminal, we got close.

Below is the end of one of the berths where a tanker would tie up and be filled.

Also on that side of the bay is the Solomon Gulch Salmon Hatchery.

It is interesting how the process works:
About 600' above the hatchery is a dam and Reservoir.
Water flows down hill to power a hydro electric plan but some is diverted to provide
water flow thru the hatchery.

The arrow below shows the water flow. 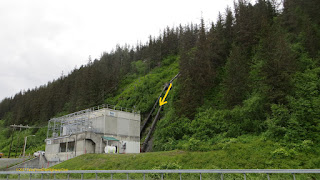 The water flows into the hatchery in the tanks below 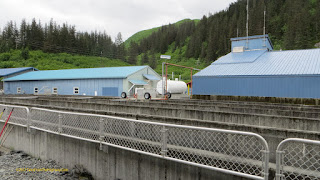 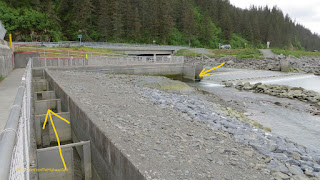 In late June thru August when the Salmon are spawning - this water course if filled
with spawning Salmon and hungry bears feeding on the Salmon.
We might have to come back later this summer to check out that sight.

Meanwhile we will just have to settle for the sight out the front window. 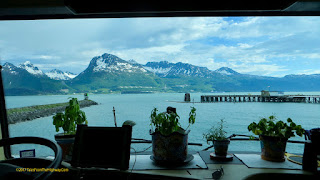 Tomorrow we are going to visit a nearby RV park where a licensed individual feeds
fish heads to Bald Eagles each night.
They swoop down to grab their share of food and its supposed to be an
awesome opportunity for some great Eagle Photography.

It promises to be a sight... and the seed of the next post.