Julis Caesar wrote those words in BC47 to describe his short war with
Pharnaces II of Pontus...

Today it described our assault on the City of New Orleans.

We hit the ground running this morning and
by 0730 we were on the road headed across the Lake
Pontchartrain Causeway (at 25miles, the worlds longest bridge) enroute
to New Orleans and our destination - The French Quarter. 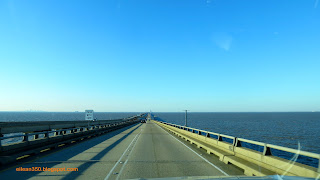 Having done my research ahead of time - I had decided to park the truck
up near the Tulane Medical Center where I knew it would be easier to move
around in the big beast and find parking.

A short 2 block walk to Canal St and we picked up a streetcar to take us on
the 10 minute ride down to the French Quarter.

Our First stop by 0900 was Cafe DuMonde for some good dark, strong
European Style Cafe (just the way we LOVE it) and a trio of
Beignets each.    What a great way to start the day. 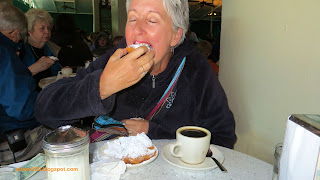 After cafe we walked around the FQ for a while taking in the sights and sounds
killing some time before Kates Surprise which was a 10am appointment.

At 0945 we were outside the New Orleans School of Cooking and
we turned into the building for our 10am cooking class.

The instructor was this animated older woman and the demonstration was a blast. 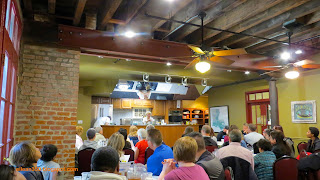 Of course we got to eat the meal when done... 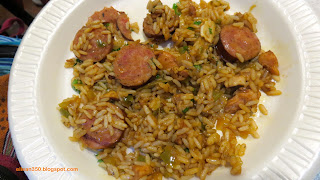 I make a pretty mean Jambaylaya to start but we both picked up some neat
tips, tricks, and ideas to mix it up a bit.

The class and the meal were alot of fun and delicious.
Kate was thrilled so the surprise was a big success!

On the way out we stocked up on Cajun spices and green chili hot sauces...
Yum!

After the school - it was now 1230 so we headed of to see some of the sights before
heading back to the north shore.

It's hard to visit the French Quarter and not see the St. Louis Cathedral.
Named after King Louis of France and a nod to New Orleans French heritage,
the Cathedral has the distinction of being the oldest continuously operating
Cathedral in the United Stated.
FYI a Cathedral (derived from the Latin "Seat") is the seat of a bishop
serving as the Central Church of dioceses.

Looking across Jackson Square with the Cathedral in the background. 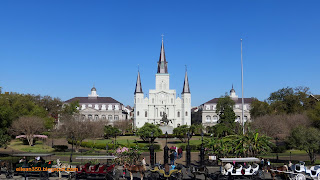 In the center is the Cathedral
On the left is the Cabildo - where the Louisiana Purchase was signed. 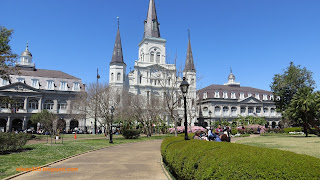 This was the site of todays self portrait. 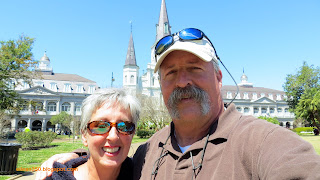 I never get tired of visiting churches and seeing the awe inspiring artistry
contained within...  An added bonus is that as of yet I still have not
been struck down by lightening on any of my visits. 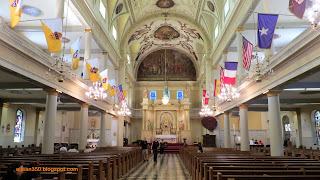 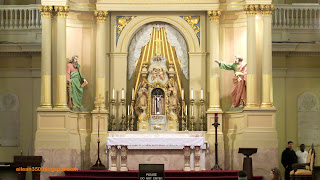 In 1967 the Cathedral was elevated to the category of Minor Basilica
by Pope Paul VI and in 1997 it was visited by Pope John Paul II.

It serves over 6,000 parishioners. 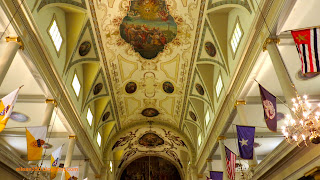 Outside the Cathedral it is back to New Orleans...
Here in the Square a New Orleans Rag Time Style brass band mixes
with the Old and New Architecture...
A mixture that is typically New Orleans. 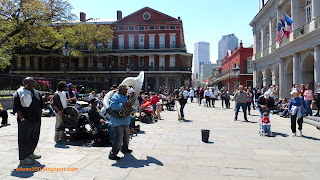 It's a vibrant and colorful city. 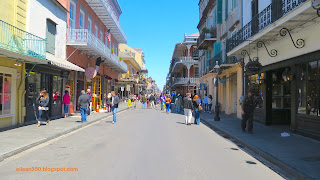 Around every corner...  a colorful surprise awaits. 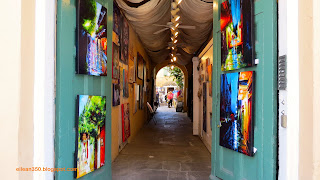 By 3pm it was time for us to make tracks back across the Lake as we had
a couple of Doodles who've been in the RV since 0730 patiently
waiting for our return.

One the way home we made a couple of quick detours, first was
a quick stop at an Albertsons for some needed groceries, then another stop
at the Saia Meat Market in Mandeville for a couple of Rib Eyes and some
Boudin Blanc Sausage.

The Boudin Blanc Sausage is a particularly Cajun treat and we grabbed a
bunch of links to throw in the Freezer for another day when we
feel the yearning for a quick return to
The Big Easy.